September 28, 2022 Guns In The News
Home»Commentary»How to Become Great At Shooting UNDER PRESSURE
Commentary

In my How to Become a Good Shot article, we touched on the importance of mastery of the fundamentals of marksmanship, how to measure your equipment and yourself with the 5 For 5 Dime Challenge, and the importance of a first round hit when ammunition could be in short supply.

In What You Need to Know About Rifle Slings, we talked about carrying your rifle, and how to use the sling to get steadier.

In the comments section, Misreading The River and Paul noted about shooting after carrying all day long, or under stress. In this article, I would like to address some exercises that while may not be actual combat, but give you an idea and how to train to shoot under pressure along with some additional exercises both physical and marksmanship.

The infamous SHTF Mr. Mutant Zombie Biker (or MZB) is not just going to let you roll out your shooting mat, set up your bi-pod rifle, set rear bags and then stand perfectly still while you take a shot from the prone at him at 100yrds. 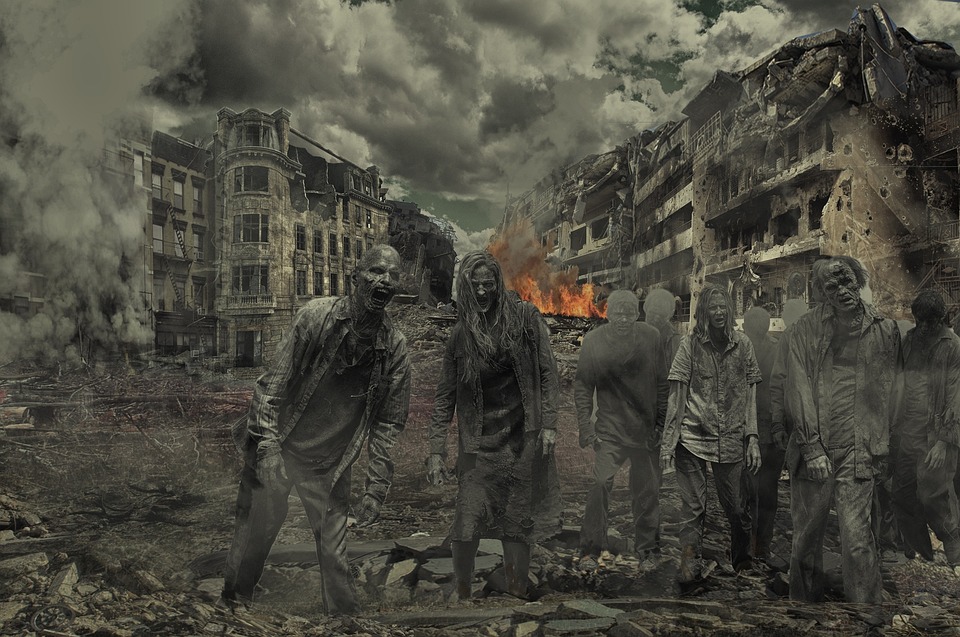 And then rush you with his AR15 with the under rail mounted chainsaw, buzzing at full tilt while you roll out your mat. We all know how that ends in a 1980s style horror/slasher flick. That, and don’t go down into the dark basement to investigate that really creepy sound unarmed.

As I mention in How to Become a Good Shot, there are different competitions you can compete in to become a better shot.

Likewise, there are competitions out there that test the shooter from on the move, dynamic positions and field positions. 3-Gun Run competitions, Precision Rifle Series and its small bore rim-fire counterpart NRL22 (even has a air rifle division), IPSC and IDPA to name a few. There are also some shooting schools and academies like Gunsite, or the Sig Sauer academy.

However, how do you train for shooting under pressure in between competitions or after taking a class?

Or if there is not a event or class within reasonable driving distance (that is really questionable in these 5 dollars a gallon at the pump era)?

If you have the space and can set up your own mini-course, by all means.

But first, a friendly reminder of the 4 Primary Rules of Firearm Safety:

2. Treat All Guns as Though They are Loaded

3. Keep Your Finger Off the Trigger until You are Ready to Shoot

4. Always Be Sure of Your Target and What’s Beyond It

In the past I set up a running path about a mile long to improve my shooting under pressure.

Then with the rifle leaning up against a tree at the shooting lane, took 5 shots at a target from the standing off hand as fast I could (.22 air rifle at 30yrds, 4 inch targets 4x fixed power scope). Ran three miles total, 3 targets, a total of 15 shots taken.

The point is, if you can safely set up some kind of exercise at the shooting lane to get your heart rate up, and then take 5 shots from the standing off hand as fast as you can.

Do it three times in a row and see how you do.

If you can, vary it from the sitting, the prone, or even field positions.

In his book, The Art of the Rifle, COL Jeff Cooper measured the Snap Shot exercise as a

“…standard test is conducted at 25 and 50 meters, utilizing the IPSC Option Target, which includes a four-inch head ring and a ten-inch chest ring. At 25 meters, the shooter stands at the standard ready, butt on hip, safety on, and muzzle aligned exactly between the shooter’s eye and the target. At 25 meters, the targets is the head ring and the shooter is allowed one and one-half seconds to mount his rifle and deliver the shot.”

For clarification, magazine inserted, live round in the chamber, safety on. One and one-half seconds to shoulder the rifle, remove the safety and take a single shot at a four-inch target.

My best time was just over 3 seconds. 4 and a half seconds and hitting a 4 inch target was more realistic. But I had a lot of misses too.

The 50 meter, ten-inch target has the same requirements. Despite the increase in target size, my times were not much better. Adjust to your capabilities.

Try at 12 inch target at 25 meters in 4-5 seconds. As you get better, more practiced, either reduced the target size, or increase your speed. Work your way up in capability. Personally, I think a 8 inch target is more practical. Either way, this is a great way to learn how to cope with shooting under pressure.

As I mentioned in What You Need to Know About Rifle Slings carrying prolonged from the low tactical can put a strain on your muscles.

This is an exercise we did when I was shooting NRA High Power. With your rifle unloaded (safe), held in a relaxed position, with your support hand on the forearm, trigger hand on the grip, place the rifle in the pocket of your shoulder and raise the slowly up into the standing off hand position.

Aim through the sights/scope at a point in the distance. Try to keep the sights aligned, and hold that position for 30 seconds. After 30 seconds, lower the rifle back into the relaxed position for one minute. Repeat this exercise until you arms, shoulders feel like they are on fire.

Then do a few more.

As time goes on, increase the time and the reps.

Here are some other exercises I recommend to make you a better shooter.

Shooting from any position, a strong core will help keep you steady.

This sounds like the opening from the movie, Zombieland, but yes, stretching can help. Granted, you will not be able to call a “time out” before hostilities ensue to stretch out, but I do find stretching before going to bed, and first thing it the morning does help. This applies more so as one ages . . . sigh.

When sighting in a scope, or using a new ammo, we take a shot, then adjust one plane (e.g. windage). Then we take another shot and adjust other plane (e.g. elevation) to bring the sights (POA) in alignment with the hit (POI). There we have established our zero for that scope and ammo at a given range.

Without looking as you know what the settings are (or should and have it written down) for that given round on that scope/sights, add/subtract clicks (dont count, or better yet, have someone else do it for you) to elevation, then windage, yet keep it on paper (i.e. within the 6 ring).

Take the first shot at the 10X. Note your POA vs POI. Then, without looking, add or subtract clicks to get the next shot as close to your initial POA as possible. Don’t try it on one plane then the next. Try adjusting both at the same time!

On more than a few occasions I have added clicks in the wrong direction (usually windage) and find myself even further to the right when it should have been to the left.

Again, add/subtract clicks to both planes without looking (or have someone do it for you). Then take your first shot at the 10X.

Still aiming at the 10x, this time note the reticule hash marks and the POI. Imagine a line from the windage and elevation hash marks extending to where they would intersect with the POI. Keep that imaginary line/intersection in your mind. Then apply that intersection with the 10X and take a shot.

How well did you do?

If you have a scope with a “Christmas” tree style reticule and the shot falls in the lower left or right quadrant, no worries! But if the POI falls in the upper quadrants? Then, worries. As M/SGT Jim Owens USMC (ret) notes, adding/subtracting clicks is more precise. Using what he calls Kentucky windage is faster. In some cases, clicks is more practical. In others, Kentucky windage is more practical.

Know how to use both for a given situation.

I am sure many of TOP readers have more than a few scopes.

Different scopes require different ring height. A high powered, 6-24x50mm scope will require high rings, whereas a 1-4×24 might require medium rings. Unless you have a stock with adjustable comb, your cheek weld may differ between the two scopes, albeit slight, still requires adjustment.

Same could be said for eye relief and exit pupil diameter for different scopes, position of cheek weld on the stock, further forward or back. Even with the same scope in different positions e.g. the standing vs the prone your cheek weld position may change.

One piece of equipment I highly recommend, is a chronograph (I have a MagnetoSpeed myself). This piece of equipment will measure the feet per second the ammunition you are shooting through your rifle. With that information, you can enter the data into a ballistic app, apply the ballistic coefficient (most ammunition and powder manufactures have this data online or in reloading manuals, note, many reloading manuals use “universal” receivers with a certain barrel length and twist rate, may not match your particular rifle), and then compute the dope for a given round at a given zero out to practical ranges. Print this data off, laminate it, and tape it to the side of the butt stock of your rifle, or memorize it.

Shooting under pressure is a valuable skill.

Note, I intended to write this using a .22LR rimfire rifle. The local gun shop and big box stores did not have any .22LR on the shelves.

The mastery of the fundamentals of marksmanship apply to everything from air, to rimfire, black powder, to center fire. Regardless of the energy behind the round, while it may not always be possible, a first round hit should be the goal.

And always remember when shooting under pressure, a slow hit is always better than a fast miss.

What are your thoughts on shooting under pressure? Do you have more advice to give? Tell us below.

1stMarineJarHead is not only a former Marine, but also a former EMT-B, Wilderness EMT (courtesy of NOLS), and volunteer firefighter.

He currently resides in the great white (i.e. snowy) Northeast with his wife and dogs. He raises chickens, rabbits, goats, occasionally hogs, cows and sometimes ducks. He grows various veggies and has a weird fondness for rutabagas. He enjoys reading, writing, cooking from scratch, making charcuterie, target shooting, and is currently expanding his woodworking skills.