April 19, 2021 Guns In The News
Home»Commentary»How to Deal with Tunnel Vision
Commentary

How to Deal with Tunnel Vision

Tunnel vision is a phenomenon that occurs when we focus on a particular threat. Our complete attention is focused on what we believe will hurt us and/or kill us. We may focus on the person that represents that threat or we may focus on the weapon in hand. In fact, it is not uncommon for that focus to be so strong that we end up shooting the crook in the gun hand or the actual gun itself.

The first step to deal with tunnel vision is to simply know that it is a natural phenomenon. By being aware of it, we can work to overcome it.

The second step is to practice looking around you after you have fired a shot string at the range target. Get in the habit of looking around you. It forces you to break that tunnel vision. We do this in practice so that it becomes a habit that we do every time, even in an actual gunfight.

Some folks have turned this look & assess technique into a sort of choreographed move. They simply wiggle this way and that because it looks cool. Look & assess has a serious purpose, but only when you actually look around and take note of what is going on. We take care of the initial threat and then we look around us to see if there are any other threats that require our attention.

The defensive shooter should understand tunnel vision and know how to break that tunnel vision by forcing himself to look and access the area around him before taking other action or putting the gun away.

How to Deal with Tunnel Vision

The Truth about “Assault Weapons” 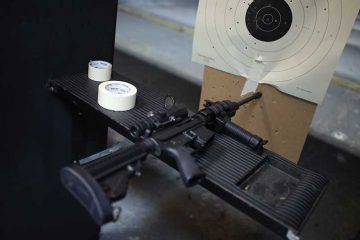