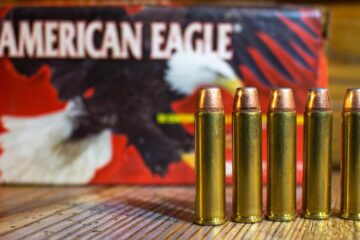 December 9, 2022 Guns In The News
Home»Commentary»How to Train with a Shot Timer
Commentary

About this time last year folks were complaining about how much ammunition cost. Now they’re complaining because ammunition can hardly be bought at any price. The current ammunition shortage creates a problem for those wanting to further develop their defensive handgun skills. This is an even bigger problem for all the new gun owners who have no defensive handgun skills. How are you supposed to train if you cannot shoot? Dry practice or dry fire as it is often called is the answer.

Dry practice is most often thought of as practicing your sight alignment and trigger control skills with the firing of ammunition. Though it can be a very boring exercise, it is a very effective one. However, there is a lot more to dry practice and learning defensive handgun skills than just pulling the trigger. Someone interested in carrying a handgun for self-defense should also be able to draw and reload their handgun effectively. A shot timer is a great tool to help you perfect those skills.

A shot timer is an inexpensive electronic device that measures the time between an audible alarm and all the shots that follow. You press the button and a few seconds later the shot timer beeps providing you the go signal, and then the elapsed time between that beep and every shot you fire after that beep is recorded. But, shot timers also have what is called a “par time.” With the par time feature you can set the shot timer to beep again at a pre-determined moment after that first “go signal” beep. This gives you an opportunity to attempt to complete a task such as drawing or reloading your handgun within that time limit.

Since a shot timer continues to record the time of every shot after the initial beep, you can use it to see how long it takes you to complete a multi-shot engagement. Let’s say you are working on a drill with three targets and the object is to shoot each target twice. When you hear the “go signal” on the shot timer you begin the engagement and when you are done it will register the time it took to fire all six shots. You can work to decrease this time as your accuracy allows.

But there is another feature of the shot timer that is often overlooked and that’s the ability to tell you the time between—the split time—every shot you fire. In the previous example the shot timer can tell you how long it took for you to fire the first and then the second shot on the first target. Then by looking at the difference between the second and third shot, you can see how long it took you to transition to the second target and so on. This can provide valuable training information allow you to see where your weaknesses are.

The effective use of a defensive handgun is generally dependent on the speed with which it is employed, and the accuracy of the shots fired. Targets tell us what we need to know about accuracy but without a shot timer we are left guessing at the amount of time it took. And it’s almost impossible to guess times when we’re sometimes talking about fractions of a second. Some trainers do not believe in the use of shot timers because they feel that when the time comes you will shoot as fast as you can. There is probably some truth to that, but with a shot timer you can learn how fast you can shoot, draw, or reload, and with that knowledge you can work to get faster.

Yes, ammunition is hard to find nowadays, and when you do find it, it sometimes cost a lot more than it did a year ago. Buy it when you can, but in the meantime pick you up a shot timer. The Pact Club Timer retails for $129.95 and in just a few dry practice sessions you will get your money’s worth in the ammunition you save (or can’t find). And when you do have ammunition, the shot timer will help you get the most out of every practice session. Keep a logbook of your progress and work on improving your speed. One thing’s for sure, if you are ever in a gunfight you’ll wish you had more time, you can find some of that time by practicing and getting faster.