May 16, 2022 Guns In The News
Home»Commentary»I Have This Old Gun: Beretta 92FS & M9 Handguns
Commentary

In the early 1980s, all branches of the United States military, except the U.S. Air Force, were still using the M1911A1 as its standard sidearm. While the M1911A1 was a tried and tested design, a push was made to select another handgun with more modern features and was of new production, as the production of M1911A1s had ceased in 1945. Thus, the U.S. began searching for a new design. Of the various companies that submitted designs for testing, one was the oldest names in the firearm industry, Beretta. What the Italian company presented to the U.S. military was an all-metal, semi-automatic handgun, the 92FS.

The Beretta 92FS was developed in 1984 specifically to meet the pistol requirements for the U.S. military. Its design was largely based off of Beretta’s previous handgun designs, the M1923 and M1951. Features that the 92FS inherited from the M1923 include the open slide, while the use of an alloy frame and locking block barrel came from the M1951, which was itself based off of the design concepts of the Walther P38. A direct-feed, double-stack magazine was also incorporated from the design of Beretta’s Model 84. The result was the first model Beretta 92, the design of which was finalized in 1975. 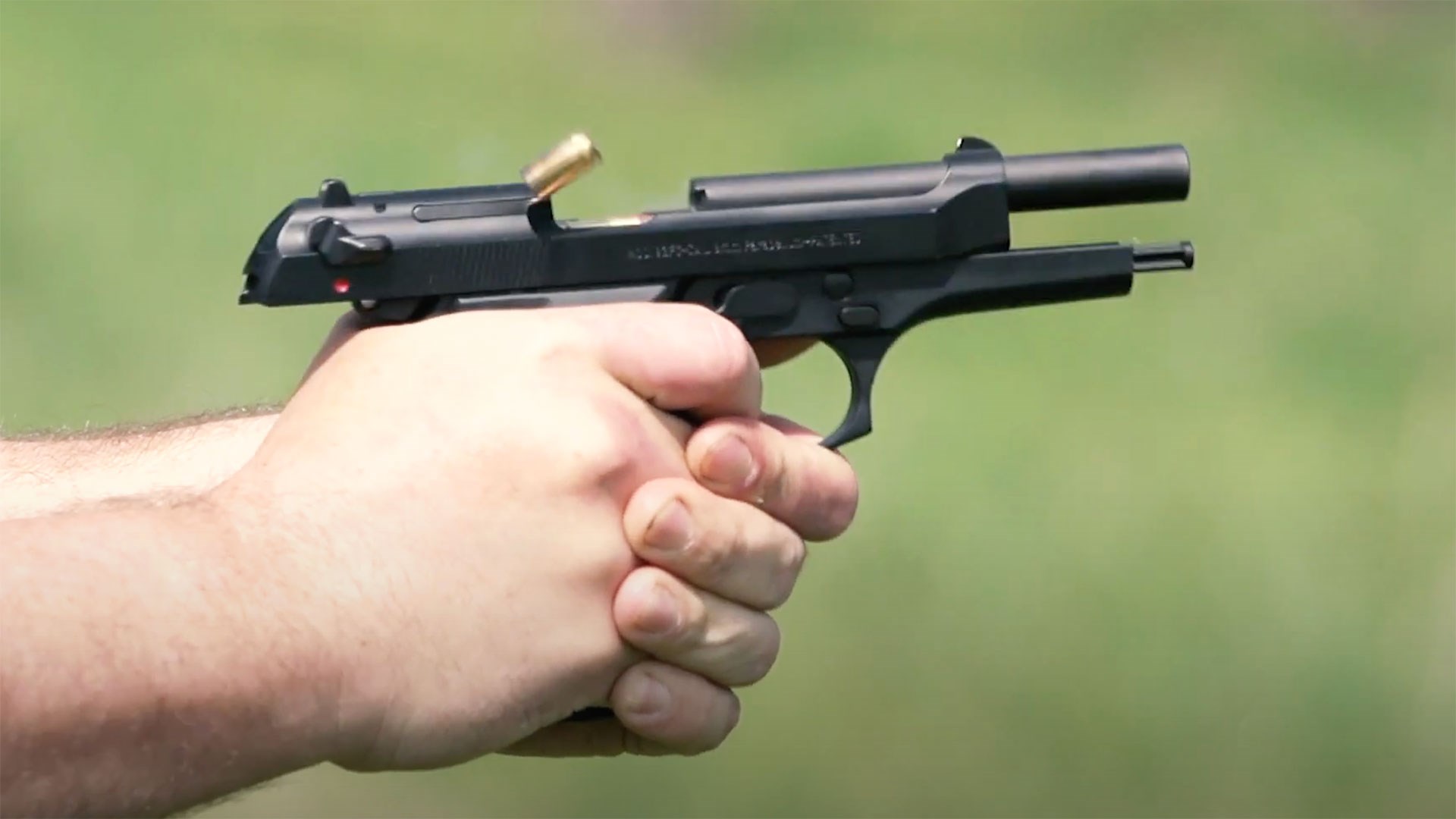 Not long after the development of the first version of the 92, Beretta began to alter the design with even more features, seeking various contracts with military and law enforcement agencies. The first change was the addition of a slide-mounted safety lever, which also functions as a de-coking lever, to meet the requirement of the Italian military and law enforcement as the 92S. Another variation was developed again for U.S. Air Force trials, the 92SB, which added a firing pin block, ambidextrous safety levers and moved the location of the magazine release from the bottom of the grip to the side of the frame just below the trigger guard.

In 1980, the Beretta 92S was chosen over other models presented by such companies as Sig Sauer, Smith & Wesson and FN. However, the results were challenged by the U.S. Army, and the trails continued. By 1984, Beretta updated the 92 design yet again for the trials seeking to replace the M1911A1. Parts were redesigned for complete interchangeability, along with some other minor changes, resulting in the 92F. An issue was discovered during these later trials where the slides of 92F handguns were falling off. This was corrected with an enlarged hammer pin, resulting in the Beretta 92FS. It was this design that was ultimately adopted by the U.S. in 1985 as the M9. 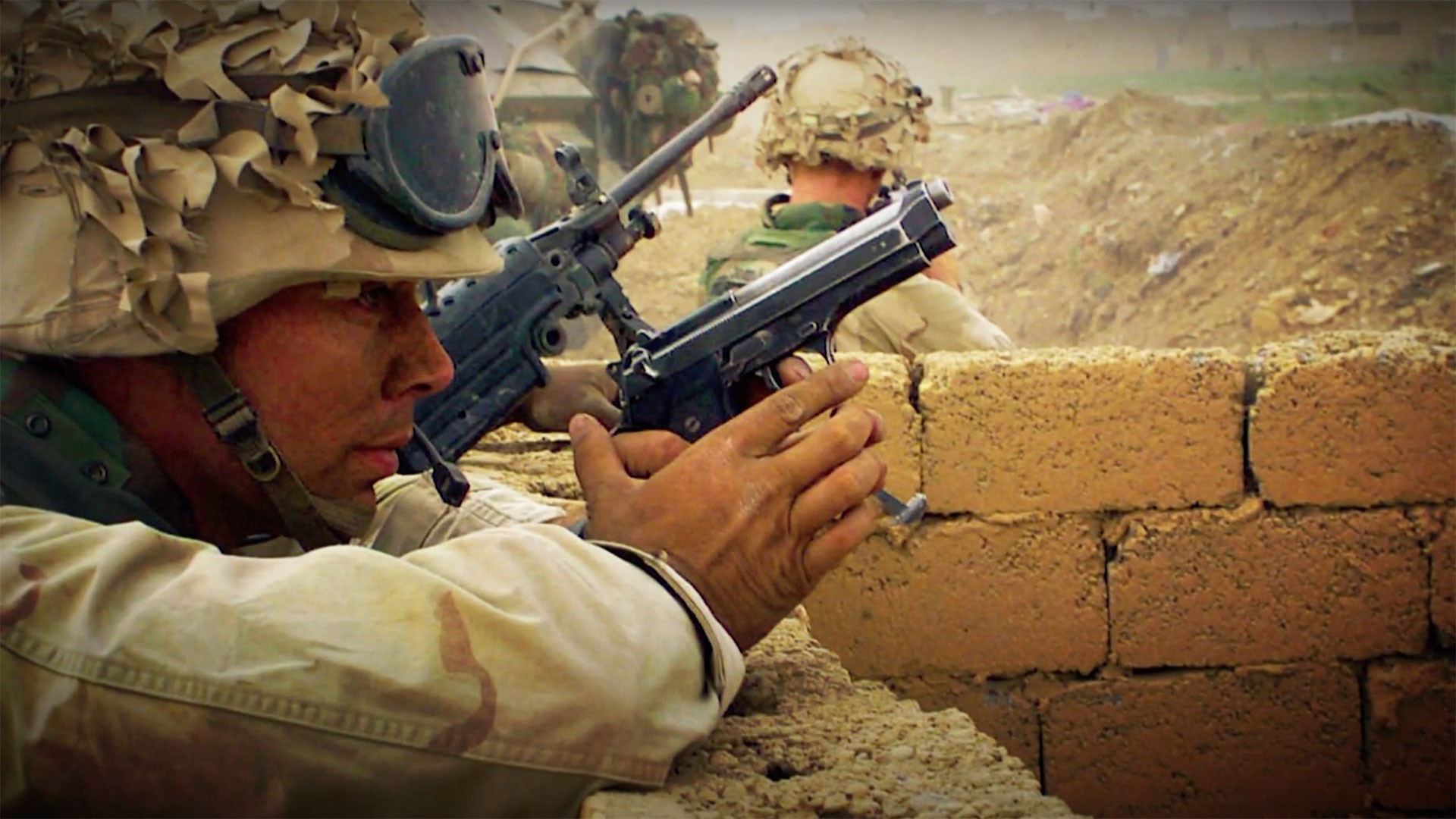 A U.S. soldier armed with a Beretta M9 service pistol.

The M9 is similar in size to the M1911A1 which it replaced, but slightly lighter thanks to its use of an aluminum frame. It also has double the magazine capacity of the M1911A1, with 15 rounds standard. This was thanks in part to the use of double stack magazines, and the M9’s chambering for 9 mm over .45 ACP. The swap from .45 ACP to 9 mm was made by the U.S. after being pressured to have a common pistol chambering with the rest of its NATO allies. After its adoption, the M9 was used by the U.S. military for several decades, from the Cold War into the War on Terror.

Complaints did arise from the M9’s military use, but these were largely based off of experiences with worn pistols or those being used with aftermarket magazines. Otherwise, the M9 had a successful carrier as the standard U.S. military sidearm up to the second decade of the 21st century. The design of the 92FS has also proved popular in the civilian market, with several variants commercially available, including compact versions. While very few, if any, M9 service pistols are in private hands, Beretta released several limited editions of the 92FS which replicate the markings and appearance of the original M9. 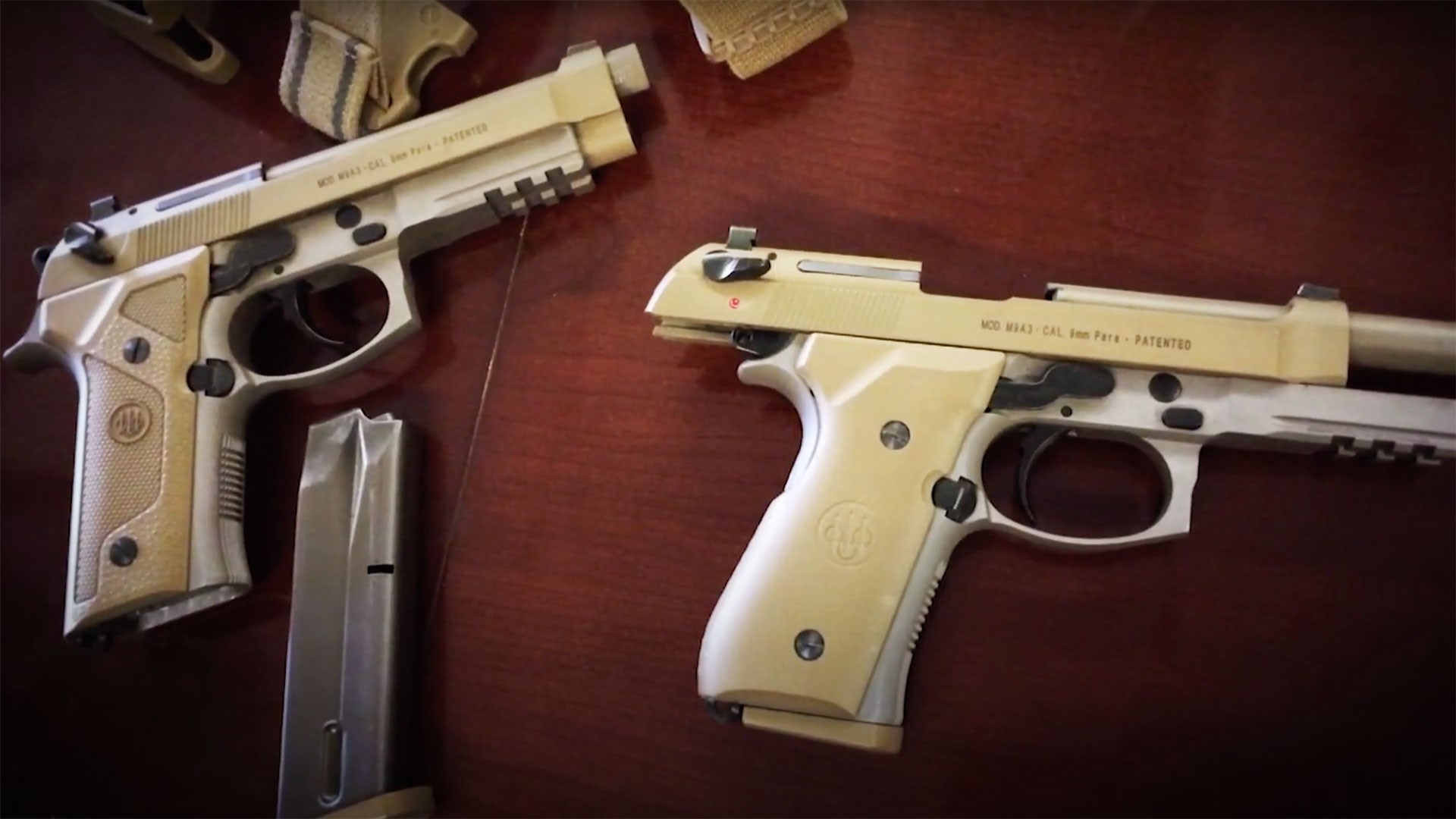 Two examples of the Beretta M9A3, a design that was aimed at the Modular Handgun Systems program and is now commercially available.

Despite its successful service history, the M9 was slated to be replaced by a new handgun in the 2010s. More recent handgun designs of the time were tested in a series of trials known as the Modular Handgun Systems program, which began in 2014. Beretta introduced an improved version of the M9, the M9A3, that same year for the trails The M9A3 had even more features than the original M9, including a dust cover mounted Picatinny rail, a threaded barrel and 17 round magazines to name a few. Despite the improvements to the design of the M9A3, the U.S. Army declined to evaluate it since it did not meet requirements, and was dropped from the trials by 2015.

Ultimately, the striker-fired, polymer-framed SIG Sauer P320 was selected by the program in 2017, as the M17, to replace the M9. Today, versions of the Beretta 92FS are still commercially available, including the M9A3 which was entered into the Modular Handgun Systems program. The design of the 92FS is still popular today, and is arguably the best known pistol design to come from Beretta. For more information on commercially available versions of the Beretta 92, visit beretta.com.

Is the Smith & Wesson J-Frame Still Relevant for Personal Defense?