Growing up in rural southeast Missouri in the ’50s and ’60s, it was very natural for me and my friends to explore and hunt all of the neighboring farms and woods. Starting with slingshots, BB guns, homemade bows and arrows—and eventually store-bought bows, single shot .22s and .410s—we hunted grasshoppers, mice, birds, frogs, snakes, lizards, rabbits, squirrels and quail. We gained an abundance of shooting, stalking and overall hunting experience, but it was all small game. In those years, there were no deer or turkeys in our area. It was big news if we saw a deer track.

I was 20 years old and in my third year of college when a fraternity brother invited me to go deer hunting with him at his uncle’s place in south-central Missouri in the Mark Twain National Forest. I jumped at the first opportunity to hunt deer, but I had a big problem—no deer rifle! I borrowed a Model 1891 7.65 Argentine Mauser from my brother, Roger, who said he had never shot it, but he gave me a partial box of shells and told me to test it. No scope, no range and no targets. I set up a beer can and backed off about 80 yards. I fired several shots offhand and actually hit the can once. Good enough for me. I got my first deer (a whitetail doe) on that trip with a single shot in the neck. I was ecstatic! I had joined the ranks of successful deer hunters—not very many in my home area at that time. I bought that gun right after the hunt for $15. That was in 1969 and I have continued to use it to this day—51 years later.

But this story is not about my rifle and me. It’s about my sons and grandsons. I had bought another 7.65 Argentine Mauser—one that had been customized, but still chambered for the 7.65mm cartridge. I have never used this gun for hunting, but my oldest son, Nate, wanted to use it on his first deer hunt in 1987. I told him that I would give him the gun if he got a buck with it. Well, now Nate owns this gun—he got a buck big enough to win our camp buck pool. The next year, my second son, Chad, got his first whitetail (a doe) with my 7.65 that I let him use. 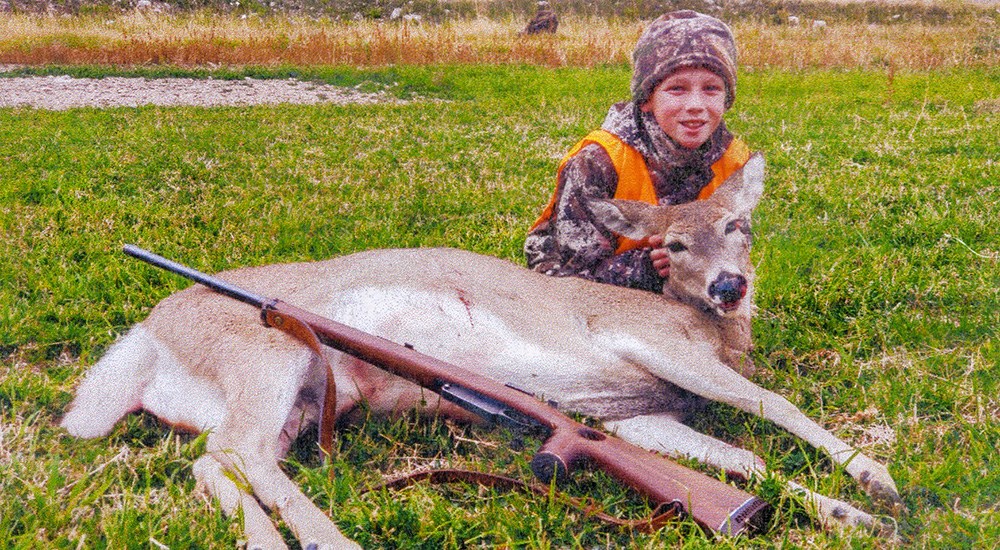 Now, fast forward to October 2020. Nate and I were in Montana for our annual elk/deer hunt. Nate’s family (wife Angelique and sons, 11-year-old Ethan and 10-year-old Dillon) and my wife drove to Ennis, Mont., to spend the weekend with us. There was a two-day youth hunt going on, so I told Nate to bring his 7.65 along and I bought Ethan an antlerless whitetail tag for his upcoming 12th birthday. We had a lot to pack in the one day that we had to hunt. We had to go to a local rifle range and let Ethan get comfortable shooting his first high powered rifle. Then, we had to locate areas where we could hunt and get permission from the ranchers. Late in the day, we found a big group of whitetails in a large irrigated hayfield. After getting permission from the owner, we had to figure out how to get in open-sight range for Ethan with his dad’s 7.65mm Argentine Mauser. Ethan and I eventually made a long (400-some yards) “hunker” and crawl to get to the irrigation ditch. Then we crawled down it to get within 75 yards of an unsuspecting doe. I was able to push my backpack up in a place to use for a rest and Ethan did the rest. One shot, one big dead doe. Nate and Dillon had been able to watch the entire stalk and kill with binoculars from the truck and they quickly joined us in celebration. I was one proud papa!

So the legacy of the 7.65mm Argentine Mauser and the Brown family continues. Next year, it is my hope that Dillon will get his chance to continue this legacy.

Do you have an exciting, unusual or humorous hunting experience to share?
Send your story (800 words or less) to [email protected] or to American Hunter, Dept. MH, 11250 Waples Mill Road, Fairfax, VA. 22030-9400. Please include your NRA ID number. Good quality photos are welcome. Make sure you have permission to use the material. Authors will not be paid, and manuscripts and photos will not be returned. All material becomes the property of NRA.