Either out of fear or ignorance, all of these cartridges were ridiculed upon introduction. However, they all represent praiseworthy ballistic evolution. (Left to right: 6.5 Creedmoor, .300 HAMR, .327 Fed. Mag., 30 Super Carry.)

The most popular rifle cartridge in America is the .223 Rem. If it were introduced today, would it survive? You’d hear things like, “it’s a solution looking for a problem,” or “an answer to a question no one is asking.” Some would claim it is unneeded since we already have the 22 Nosler and .224 Valkyrie. Still, others would say, “it’s just a way to sell more guns and ammo.”

What if a cartridge based on the .270 Win., and firing a 150-grain, .30-caliber bullet at 2,700 fps, was the newest introduction? Since we already have the .308 Win. and .300 Win. Mag., it would be pounded back
to the beginning of the last century where it originated as the .30-’06 Sprg. Just look at the 6.5 Creedmoor, which is a descendant of the now extinct .30 TC. When introduced in 2008, we heard, “We’ve already got the .260 Rem.” Nobody cared until the movie “American Sniper” came out six years later. Then, every- one wanted to be a long-range marksman with over-the-counter rifles and ammunition. No other factory cartridge/rifle combination could deliver the same balance of long-range performance and low recoil as the acclaimed Creedmoor. It’s not trendy because of marketing. It’s popular because it works.

Based on the dying .32 H&R Mag., the .327 Fed. Mag. was introduced the same year as the Creedmoor and met the same cold reception. But, with the increasing interest in concealed carry, the .327’s multi-cartridge compatibility and six- as opposed to five-shot capacity in compact revolvers has allowed it to gradually find acceptance. No one enjoys shooting a .357 Mag. in a snubnose revolver, and the .327 recoils less and performs better than the .38 Spl. while offering greater capacity. Like the 6.5 Creedmoor, it was apparently ahead of its time.

There are several reasons some cartridges—new and old—are met with disdain. One of those reasons is dogma, but dogma changes with time. The most popular defensive-handgun cartridge in world currently is the 9 mm, but during two World Wars it killed a lot of Americans. Up until Smith & Wesson introduced it in its Model 39 in 1954—and police departments began switching to 9 mm—Americans thought of it as a Nazi cartridge. This lingering sentiment partly explains the 1985 outbreak of insanity when the Beretta M9 became the issue sidearm for our military. And, only a year later, the FBI kicked the 9 mm to the curb in the wake of the Miami shootout. The great Jeff Cooper berated it like a queen would a scullery maid. Today, however, the 9 mm is the standard by which all defensive-pistol cartridges are judged. 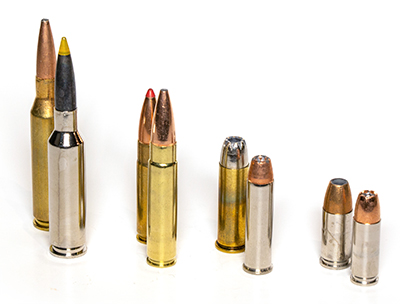 And what about the 7.62×39 mm? It’s a cartridge that crippled and killed many American service members in Vietnam and recent battlefields in the Middle East. Ori- ginally considered a communist cartridge, when affordable SKSs and AKs and steel-cased ammo flooded our shores, things began to change. All of a sudden, folks began claiming it and the AK to be superior to our M4 Carbine and 5.56 NATO. Affordability often has an unfortunate way of distorting fact and swaying popular opinion.

And let’s not forget the .40 S&W. It was once the darlin’ of law enforcement, with statistics and peer-reviewed studies to support the addiction. Today, the 9 mm has all but eradicated the .40 S&W. It’s still as good as ever, but today you might have trouble giving one away. During the .40 S&W’s reign, the 10 mm, which inspired the .40, almost vanished from the scene because the FBI said it recoiled too much.

With new cartridges, however, I believe the most prevalent cause of scorn is neophobia, a persistent and abnormal fear of anything new. Kids are commonly afflicted with this paranoia when it comes to food. Apparently, it’s a terror that can, with age, seep into other aspects of life and remain. To an extent, if tested, we would all show positive for neophobia in some respect. Interestingly, though, it mostly rears its ugly head regarding the things we are most passionate about, but don’t understand as well as we think we do. It can be hard to keep an open mind when we’ve convinced ourselves the science is settled.

How else could you explain the lack of excitement associated with the SAAMI-approved .300 HAMR cartridge, which is just a redesign of Bill Wilson’s 7.62×40 mm wildcat? With the HAMR, AR-15s/MSRs finally have a cartridge that is undoubtedly superior for short- to medium-range pursuits of any nature. The HAMR duplicates .30-30 Win. ballistics and elevates the AR platform for both defensive and hunting uses. But, just as with politics, there’s a misinformation campaign being waged by shooters suffering from dogma-induced myths and neophobia, that claim the HAMR is just another .300 BLK or 7.62×39 mm, even though it generates 35 percent more muzzle energy than either.

Neophobia may be as contagious as COVID. This became clear as I watched the internet erupt in response to Federal’s introduction of the new 30 Super Carry. All the cliches were arrogantly repeated, anyone showing interest was treated like they’d made a impolitic remark and a large segment of the gun world went into full cancel mode attempting to satisfy their adherence to dogma or hide their lack of ballistic understanding. Blatantly denying the fact that a cartridge offering 9 mm performance with a 20-percent increase in capacity is a good thing is as asinine as standing in line for 20 minutes to purchase a 10-dollar cup of coffee. One online review suggested the 30 Super Carry was a bad idea because it was—you can’t make this stuff up—new.

You don’t have to trade your 9 mm for a 30 Super Carry. You don’t have to toss your commie rifle and horde of steel-cased ammo in the ocean and buy a .300 HAMR. There’s also no mandate stipulating you must own a 6.5 Creedmoor. These cartridges may have been ahead of their time or possibly even late to the game, but you don’t have to like, love or live with any of them. They do, however, represent ballistic evolution, and it is sometimes the after effects of cartridges that become their greatest contribution. Just look at the new cartridges the Creedmoor has inspired, HAMR’s added versatility to the AR platform and the smaller, greater-capacity pistols Federal’s 30 Super Carry may give us.

Too Much Of a Good Thing