Springfield Armory expanded its 1911 lineup yet again in 2021, building on the popular Ronin series of guns with an all-new lineup of concealed-carry-ready options. The Springfield Ronin Enhanced Micro Pistol (EMP) blends features from the larger Ronin models with the patented modifications from the company’s earlier EMP lineup. Designed specifically around the 9 mm Luger cartridge, the Springfield Ronin EMP is built with a smaller frame and shortened barrel and slide that makes the gun easier to carry and conceal while still ensuring reliable function.

Two models of the Springfield Armory Ronin EMP are available at launch, one ultra-compact model featuring a 3″ barrel and an overall height of 4.8″ and another compact model with a 4″ barrel and a height of 5.1″. To make the guns easier to carry, Springfield built each model on a forged-aluminum frame, which is finished with a satin-silver Cerakote treatment. The frame is topped by a forged carbon-steel slide with a blued finish, giving the gun an attractive two-tone finish. Inside the slide, there’s a match-grade barrel comprised of forged stainless steel and featuring a fully supported ramp. 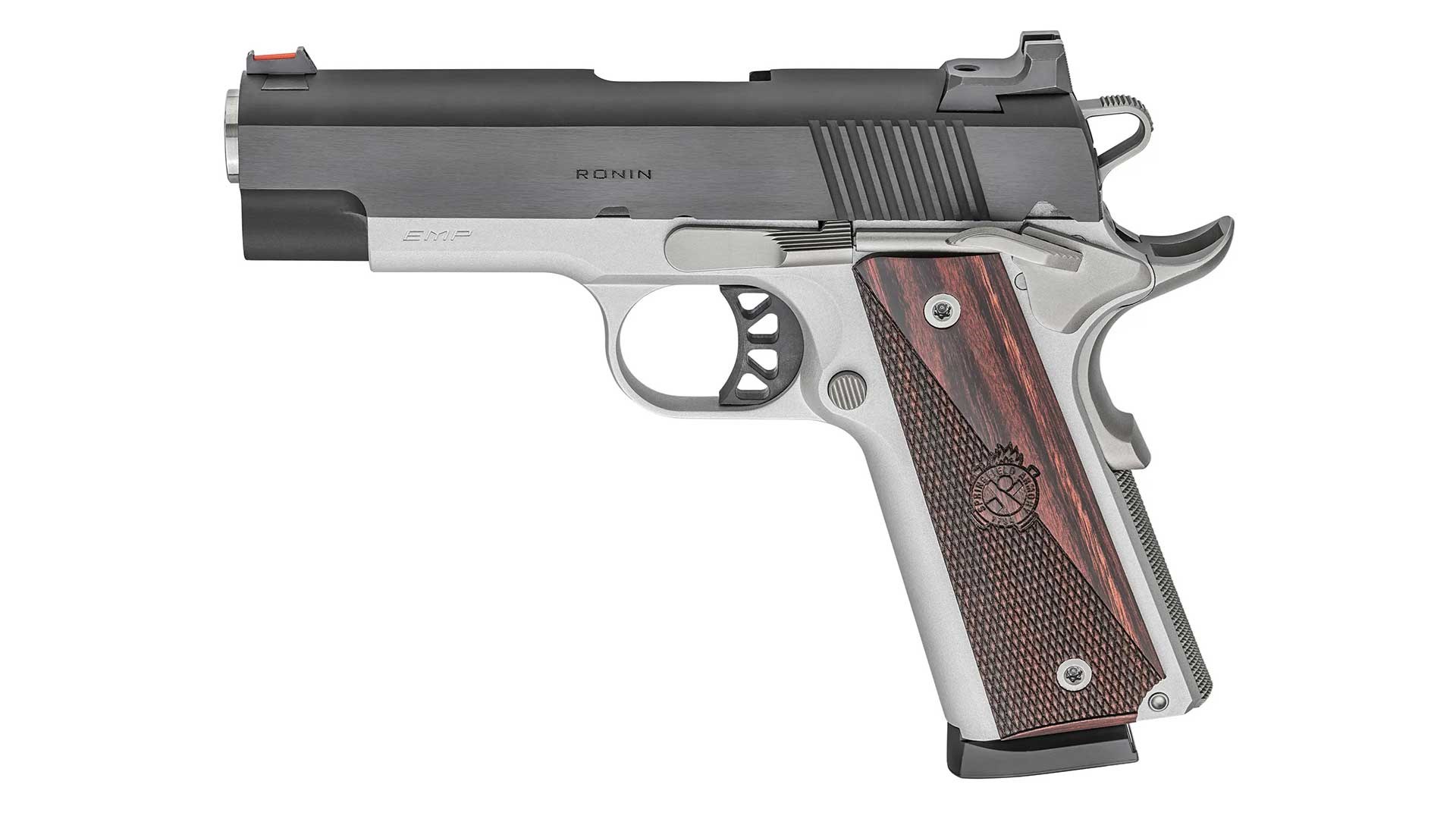 In addition to the 3″ model, the Springfield Ronin EMP is also available in a slightly larger 4″ model.

When Springfield aimed to create a carry-friendly version of its 1911, the company went back to the drawing board to create a design that ensured reliability. As a result, unlike many compact 1911-style pistols, the Ronin EMP features a shortened frame and action and makes use of 11 proprietary components that enhance function. The redesign also creates a smaller grip that’s easier to conceal. Proprietary parts found on the EMP include the frame, slide, firing pin, firing pin spring, extractor, ejector, trigger, plunger tube, plunger tube assembly, grips and magazine.

Feature-wise, the Springfield Armory Ronin EMP is loaded, having a checkered mainspring housing, hybrid grips designed to enhance purchase, and an intuitive sighting system featuring a high-visibility front sight and a tactical-rack rear sight. The recoil system consists of a dual captive recoil spring and a full-length guide rod. You’ll also find a single-sided thumb safety with generous grooved serrations, as well as a skeletonized trigger and hammer.

Both the 3″ and 4″ models of the Springfield Ronin EMP are available in 9 mm only. Unloaded, the 3″ model weighs in at 24 ozs. and ships with a single nine-round magazine. The 4″ model’s unloaded weight measures 27.5 ozs, and the gun ships with a single 10-round magazine. Both models retail at a manufacturer’s suggested price of $849. For more information, visit springfield-armory.com.