In doing so, Cuomo will now have nearly $140 million in funding to pursue his gun-control agenda, which listed seven “key areas” that his plan seeks to address. Since he declared this emergency by executive action, Cuomo will also be able to “temporarily suspend” laws and regulations “if compliance with such provisions would prevent, hinder, or delay action necessary to cope with the disaster.”’

The seven “key areas” included “treat gun violence like the emergency public health it is,” “break the cycle of escalating violence” and “target hotspots with data and science.” If these items seem vague, that’s likely intentional.

In reality, Cuomo is using this emergency declaration as a political ploy designed to distract from his myriad other problems and failed policies. While there has been a spike in crime in the Empire State, turning the focus to law-abiding gun owners entirely misses the mark.

“New York has some of the strongest gun-control laws on the books in the country, and to say that there’s some gaping hole in the gun laws is absolutely ludicrous. Everyone sees this for what it is, a diversion,” said NRA-ILA New York State Director Darin Goens.

In 2013, New York passed the SAFE Act under Gov. Cuomo, which was heralded as the solution to crime in the state. This legislation included restrictions on magazine capacity and expanded the states “assault weapons” ban. The NRA joined a federal lawsuit, arguing that Cuomo “usurped the legislative and democratic process” in passing the SAFE Act. Predictably, it did not solve New York’s crime problem.

“Gov. Cuomo and the Democrat controlled Legislature have not only failed to fix the problem, they have made it worse! Their catch-and-release ‘bail reform’ and defunding of law enforcement has resulted in New York crime hitting historic levels,” reported the NRA Institute for Legislative Action (ILA).

We’ve written here at length about how lawful gun owners are not responsible for the actions of criminals, including how President Joe Biden (D) recently said as much while also labeling “gun violence” as a “public-health crisis” himself. Of course, calling this a public-health crisis is also dishonest. Guns are not a disease, they are simply tools.

Incredibly, Cuomo is falsely equating the actions of criminals to that of a global pandemic. “We want to do with gun violence, what we just did with COVID,” said Cuomo. This is not to mention that Cuomo’s handling of the pandemic was questioned by many.

New York state legislators have been vocal in their opposition to this overreaching action from the governor.

“On the issue of Andrew Cuomo’s gun violence disaster emergency, there is very little difference between New York’s status as ‘first in the nation’ and ‘worst in the nation.’ The governor’s decision to issue yet another executive order and declare gun violence a public health emergency is another example of his incessant need to circumvent the Legislature and dictate policy from his bully pulpit,” said New York Assembly Minority Leader Will Barclay (R) in a press release.

Even those from Cuomo’s own party have criticized the move. “Cuomo’s declaring a disaster emergency over a problem that New York and other states have been grappling with for years is an unnecessary political stunt that runs the risk of trivializing both the violence and the very concept of emergencies,” tweeted Assemblyman Ron Kim (D).

Make no mistake, these recent actions by Gov. Cuomo—including a dishonest attempt to go after firearms manufacturers—are nothing more than an attempt to save his faltering image.

“Gov. Cuomo has been in office for over a decade, and he has had every opportunity to get it right. He has failed miserably, and today was nothing more than a doubling-down on more of the same failed politics,” reported the NRA-ILA.

Sadly, this will not solve anything and it will only punish the law-abiding citizens of New York. It’s no wonder that New Yorkers have been leaving the state in droves, as evidenced by the state’s recent loss of a congressional seat.

Immediate Action: The Easiest Way to Keep Your Gun Operational 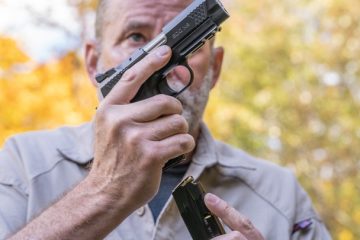