June 30, 2022 Guns In The News
Home»Commentary»Remington Ammunition: Behind The Scenes
Commentary

One of America’s oldest ammunition brands, Remington is a household name among shooters and known around the world for its iconic green boxes. Synonymous with all things that go bang and quintessentially American, the company has more than two centuries of innovation under its belt.

After two bankruptcies in as many years, however, there were no guarantees for Remington until industry juggernaut Vista Outdoor took over Big Green’s ammunition operation in October 2020, including the Lonoke, Ark., manufacturing plant. Under Vista’s management, Remington is focusing on pushing out its products to an ammohungry public without over-expanding, wisely avoiding the mistakes of the past. By all measures, the plan is working. 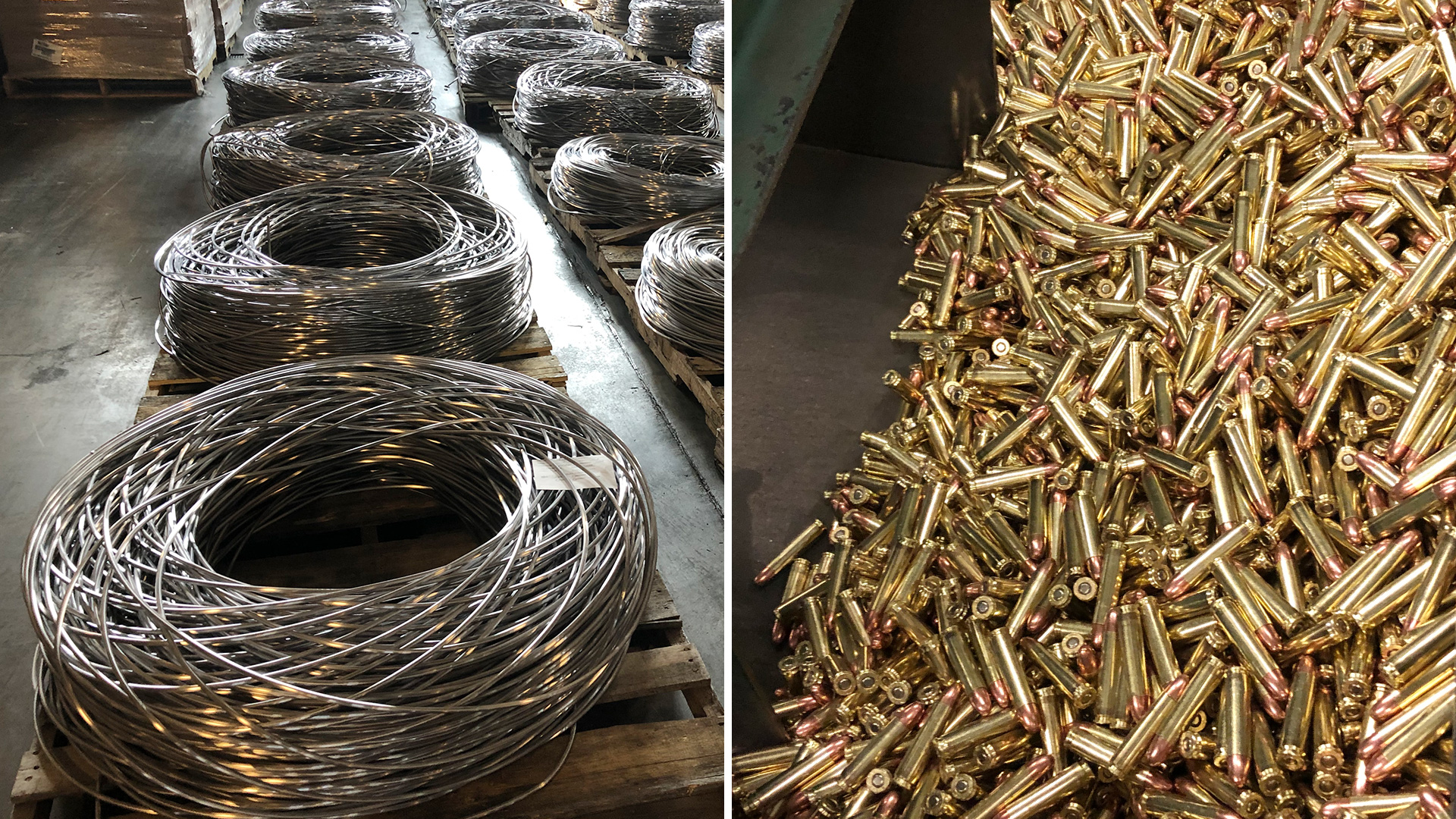 At the Lonoke plant, pallets of raw materials, such as the lead wire coils pictured left, arrive for manufacture into components for loading rifle, pistol and shotgun ammunition.

Not long after the ink was dry on the Remington Ammunition acquisition, Vista Outdoor President Jason Vanderbrink and his team got to work building back up the staff at the previously underutilized Arkansas plant and ramping it back up to full capacity. “We’re continuing to hire local manufacturing jobs, producing ammo 24/7 and revitalizing Big Green as more ammo goes out the door daily,” he says.

I had the opportunity to step inside Remington’s state-of-the-art Arkansas manufacturing facility and see how its iconic ammunition is made. The Lonoke campus is massive—befitting a vertically integrated ammo factory. In addition to the manufacturing buildings, there are offices, research and development facilities, storage areas and the immense Remington Gun Club. “The facility spans 1,200 acres,” said John Trull, Remington Ammunition’s former vice president of product management. “It’s basically a little community into itself. Every time I come down here, it’s amazing to watch raw materials transformed into precision projectiles and everything involved with that, especially the expertise of all the folks working on the floor. It’s awesome.” 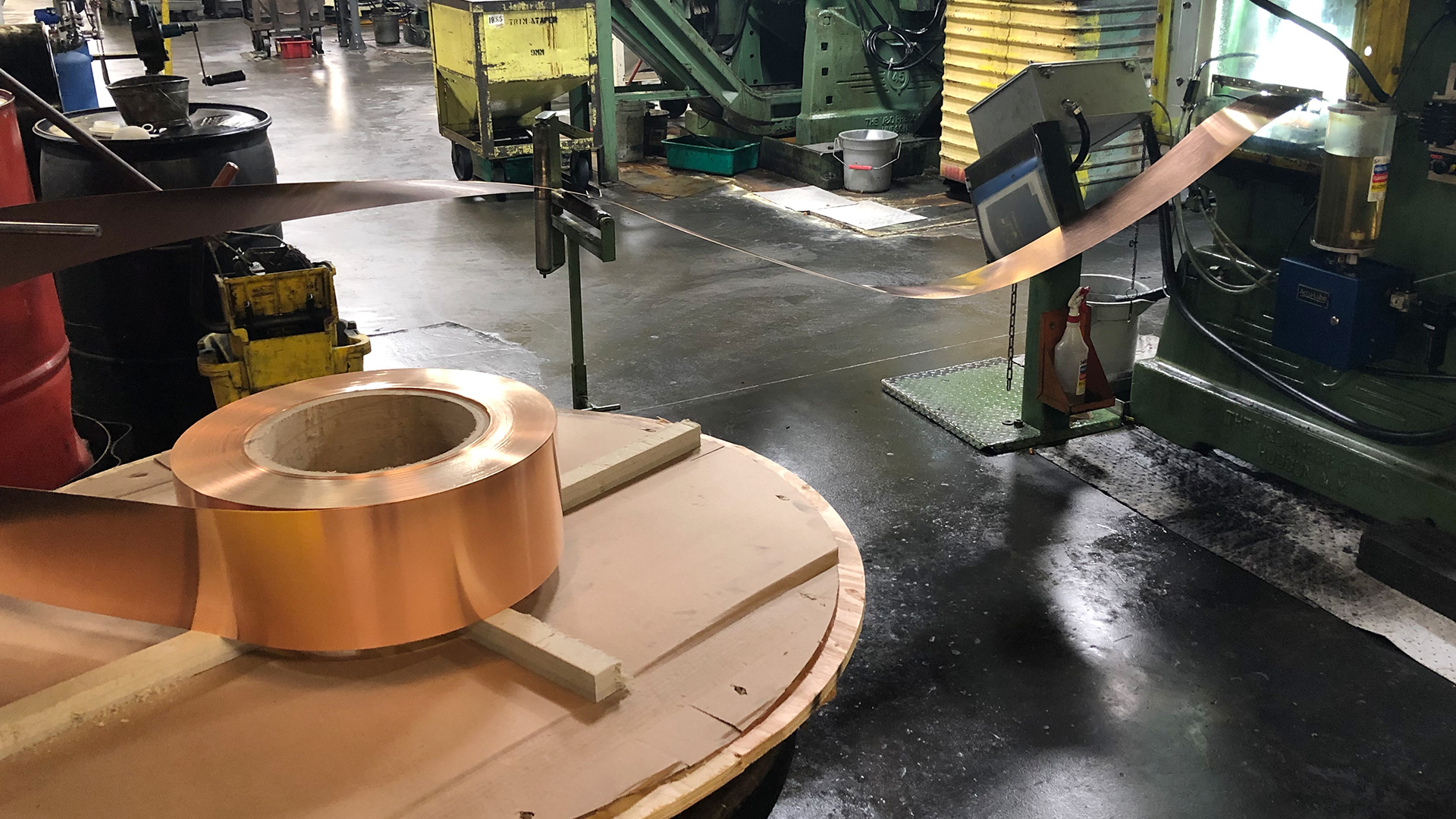 Raw materials such as lead wire coils and cartridge brass strips arrive at one end of the plant.

The scale at which Remington churns out ammunition here is eye-opening. “Every Remington product category is being produced at maximum capacity in Arkansas,” says Nick Sachese, Remington Ammunition’s director of product management. During my factory tour, I observed high-output 9 mm production, smaller batches of rifle ammo such as .35 Rem., and even large-gauge (think eight and 10) shotshells and components for commercial applications.

The Lonoke factory has been in operation since 1969, but some of the machines go back even longer than that. Remington technicians dutifully keep these machines in tip-top shape, updating and rebuilding them for smooth high-volume operation. In contrast, another newer building on the campus houses stateof- the-art loaders churning out 9 mm ammo by the pallet load. It’s an interesting mix of classic and modern machinery. “The new facility represents a significant volume of our total production here,” explains Sachese. 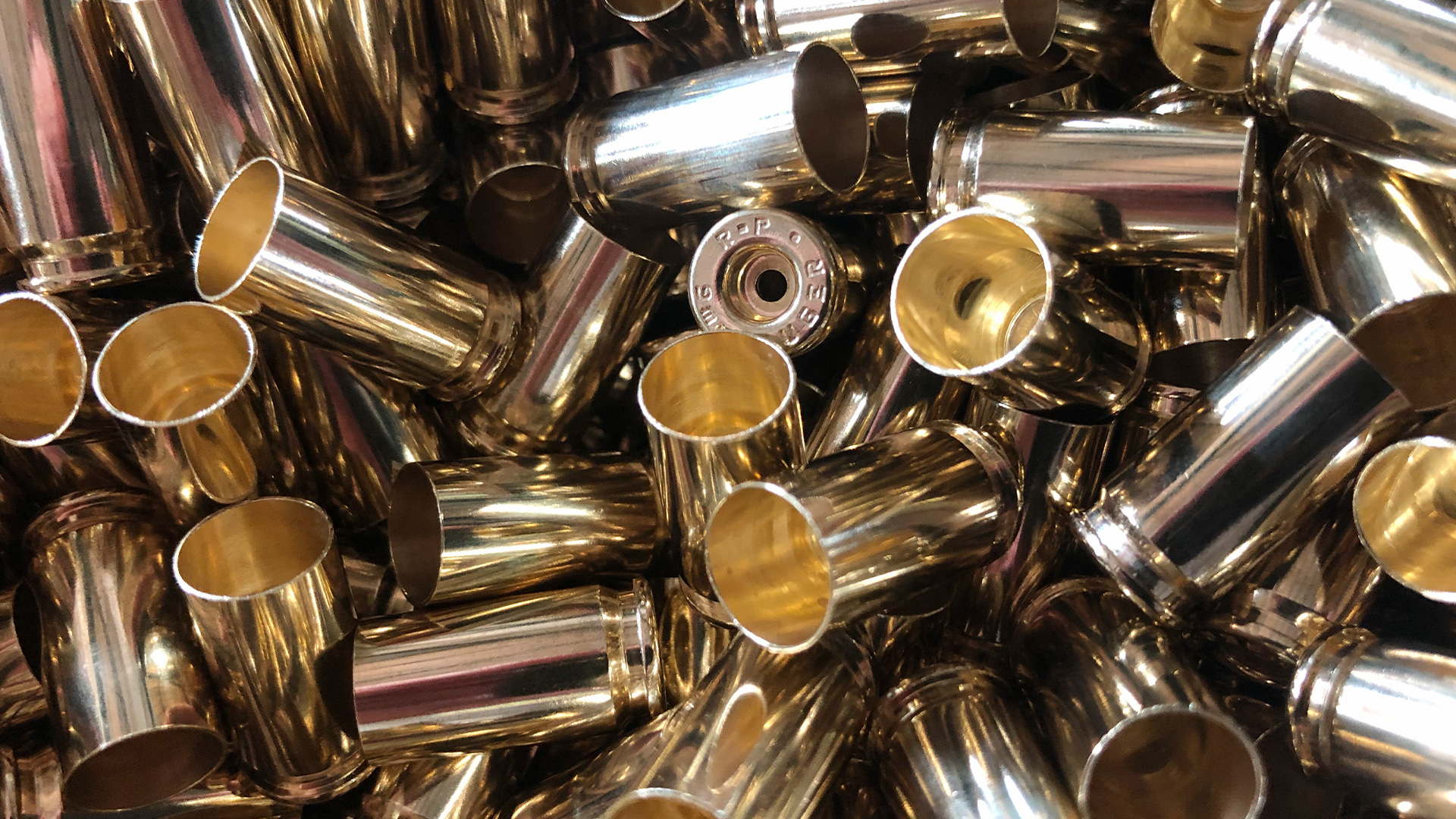 Freshly headstamped and trimmed 9 mm brass cases are collected before heading to the loaders.

Ammunition manufacture is a loud, dizzying activity. The noise hits you the minute you walk through the door. But, beneath the chaotic clanking and whirling of machinery, metal components are stretched, struck and swaged, moving from one process to the next with symphonic precision. It’s a modern manufacturing masterpiece.

It all begins with raw materials, which don’t stay in that form for long here, with machines running 24 hours a day, seven days a week. Remington has full dominion of the ammo-building process at Lonoke, from making its own bullets, cases, hulls, primers and other components to its own 11-story shot tower, which many say is the last remaining operational example in the United States. “We can control the quality of every component going through this facility,” Trull says. “Complete ownership of the process is a key strength for us.”

Everything starts out as long coils of lead wire. Depending on what is being made, the wire may go straight to the bullet assembly machine, or it may go to the impact swager to become a near-net shape core of the right weight. In the shell area, the metal for the cups is 70/30 cartridge brass that arrives at the factory in long strips. After blanking, the cups are deep drawn into a cylinder and annealed between each session. The annealing process heats the brass, which softens it and allows it to be stretched. The cases then receive a post-annealing wash to remove oxidizers. Afterwards, stretched cases travel through a header that adds primer pockets, headstamps and extractor grooves. After headstamping, a final anneal softens the neck to seat a bullet. The rifle cases that require a taper go to a body annealer before heading to the multi-station taper press and mouth annealer. As for pistol cases, the majority go straight from headturning to trimming, except for 9 mm which receives a taper.

With bullets and shells ready, primers arrive from the onsite primer manufacturing facility, and the three main components and propellant finally come together at the loader. Center-fire cartridges are loaded multiple ways. Some loaders have precision weighing capability, while others use the plate-load process, using volumetric filling to load 154 cartridges at a time, per plate. 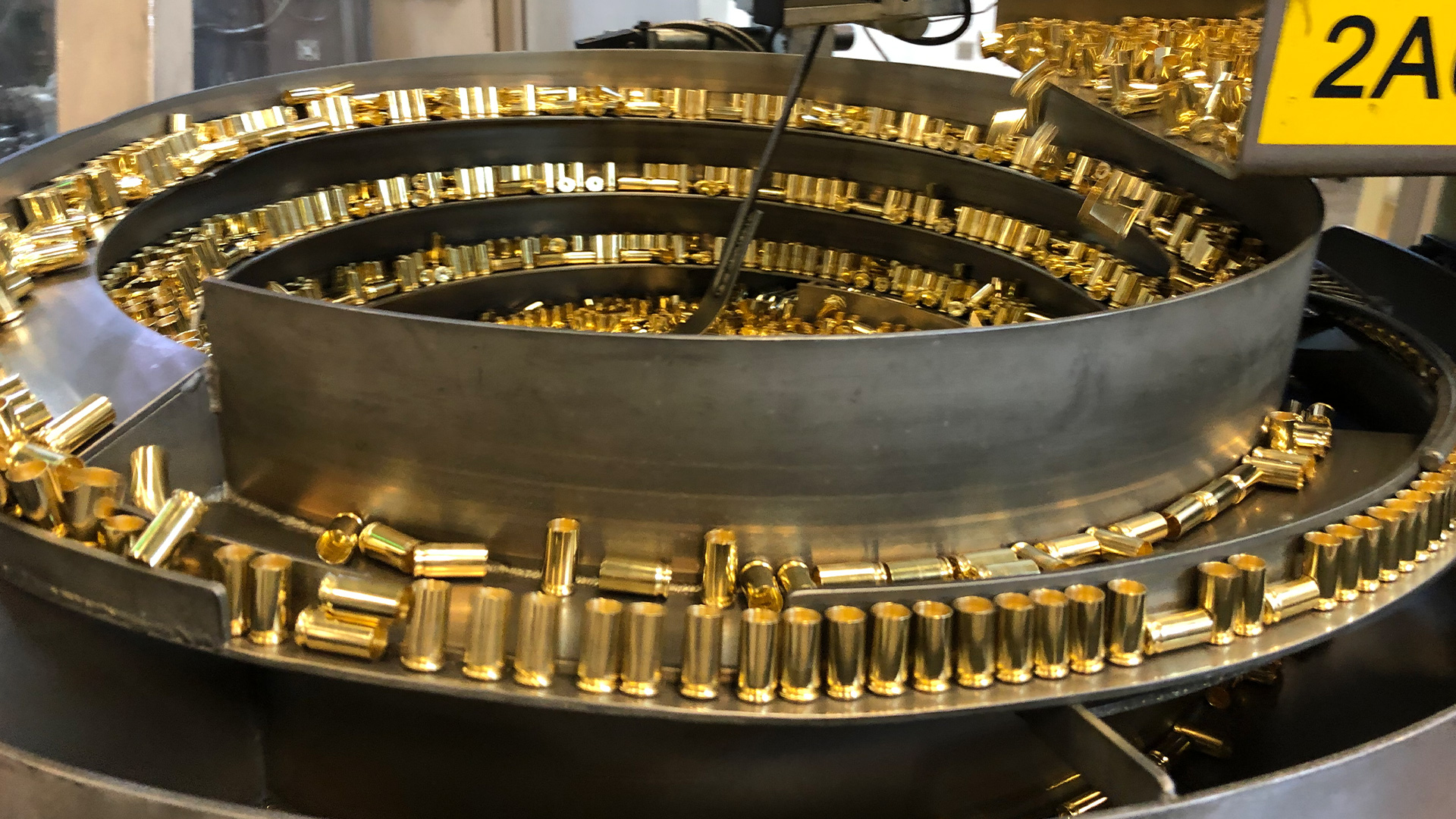 Millions of components such as these 9 mm cases are produced at Remington’s Lonoke plant every day.

Similar to center-fire, the 70/30 brass for rimfire ammo cartridges arrives in strip form, and is then blanked with cups that are drawn into what ends up as the final shell. There’s no head or rim, yet. The shellmaker creates the headstamp and rim, also trimming cases to length. After all that work, the shells run through the annealer and are then washed. Now, the shells are ready for priming. The priming mix is spun into the rim of the shell in a delicate operation. After inspections, the primed shells, lead cores and powder are put in the loader and the bullet is impact swaged into its final net shape. The bullet goes straight from the swager right into the shell, which greatly reduces any chances of deformity during handling. Loaded rimfire rounds are now ready for packing.

While rimfire ammo occupies the bottom of the market in price, that does not mean it’s any less difficult to manufacture. “Everything that goes into making a loaded rimfire round—the priming operations and to do it at the scale that we do it—I think people would be surprised to learn how complicated the process is,” Trull said. “There are so many steps along the way. We’re visually inspecting every single case, adding up to millions a day—that’s just one example of how much goes into making ammo.” 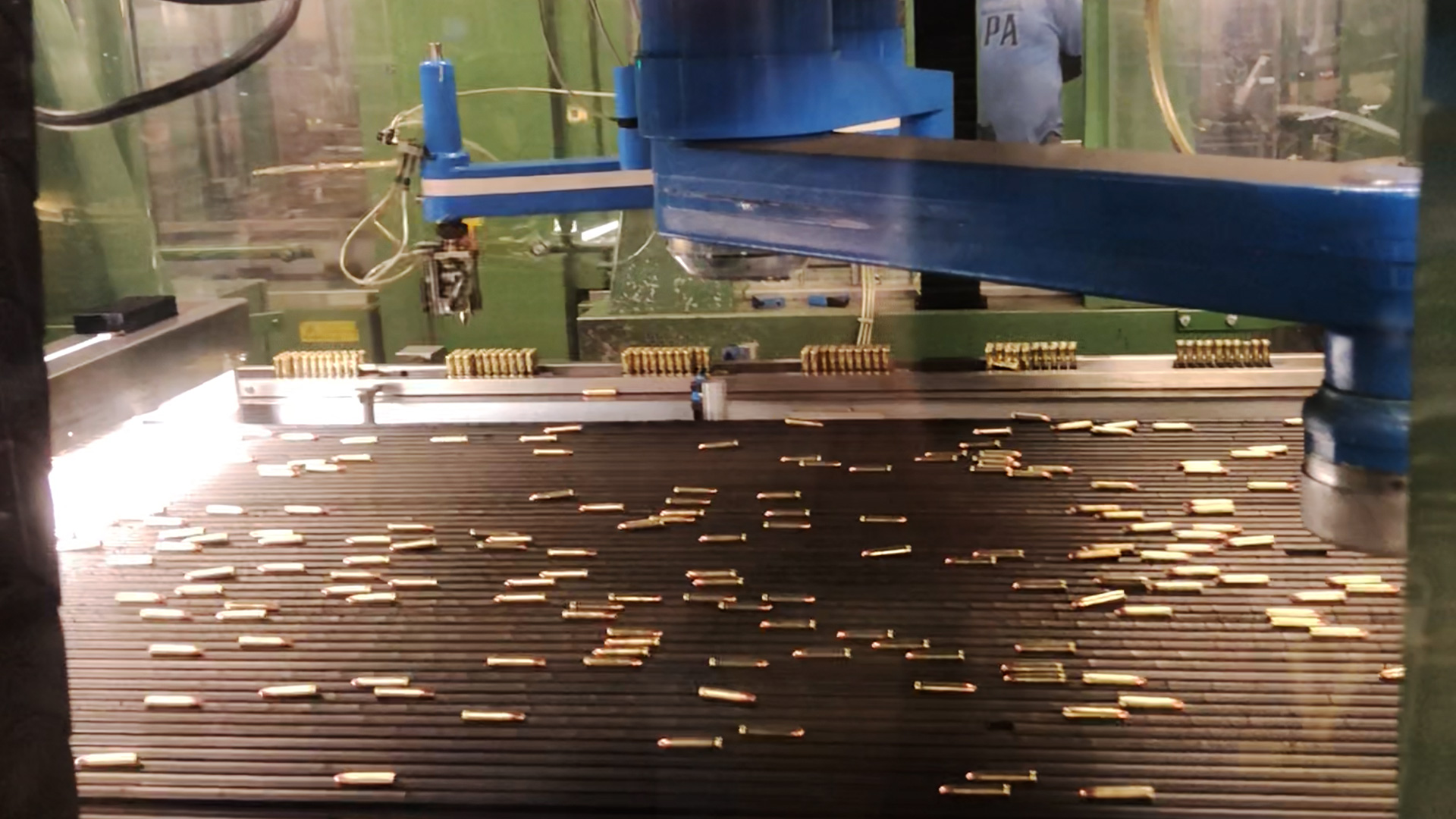 One of my favorite parts of the tour was watching the robots pick cartridges from this conveyer belt.

Perhaps the most unique feature at the Arkansas facility, Remington’s 11-story shot tower is the tallest point in Lonoke County. Lead billets, each weighing 125 pounds, take a slow journey to the top of the tower where a furnace liquifies the metal. 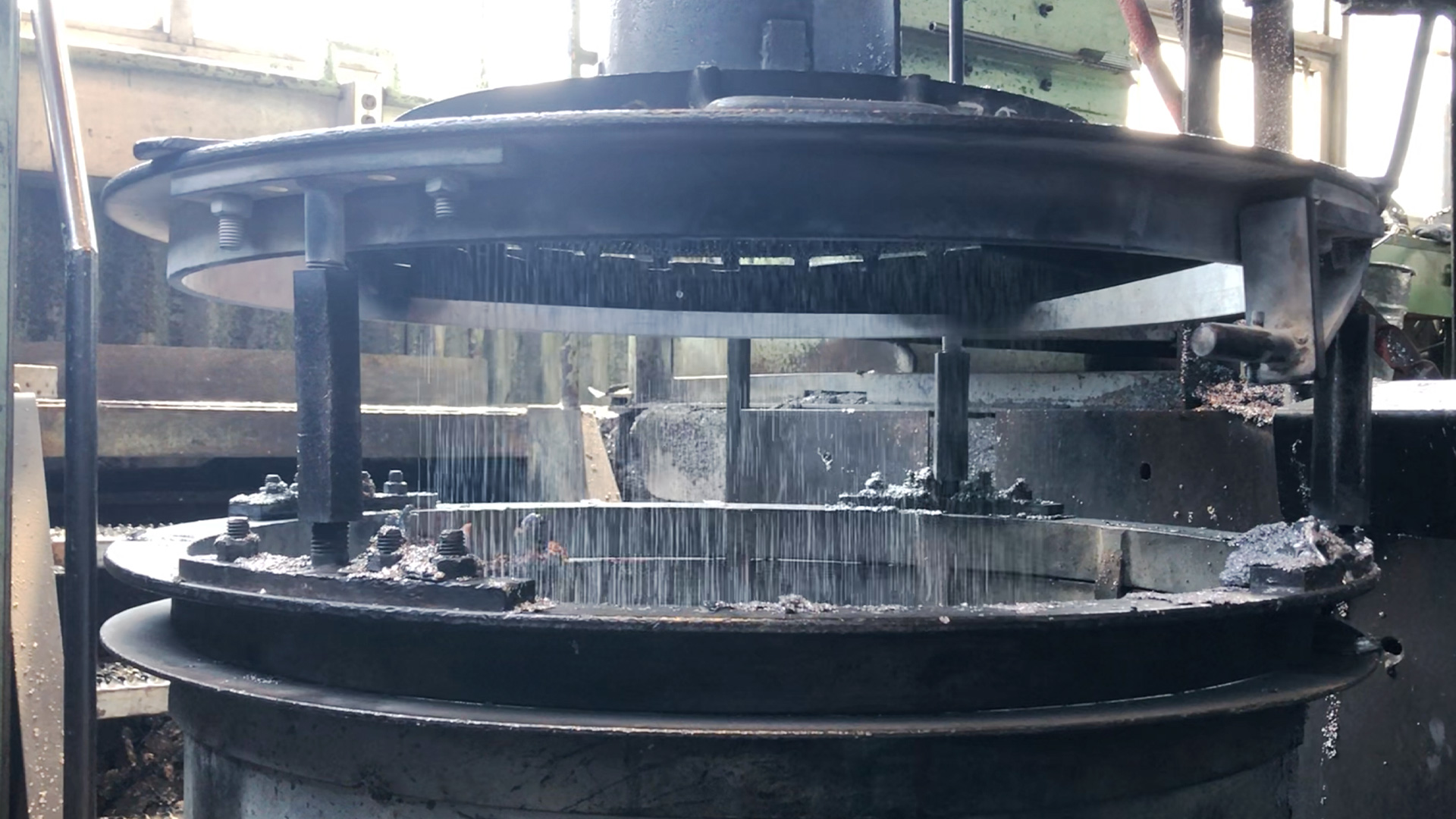 At the top of the shot tower, molten lead flows like water through a shower head in preparation for the long trip down.

The molten lead is dumped across screens, and the primordial shot freefalls through the air as droplets, naturally solidifying into perfectly round spheres before landing in water tanks to harden. Next, the shot travels across glass plates to ensure roundness. Any lacking the velocity to clear a gap at the end of the glass plate fail and are sent back up the tower for re-processing. The result after screening: nice, round shot. The completed shot is stored in enormous hoppers next to the tower. 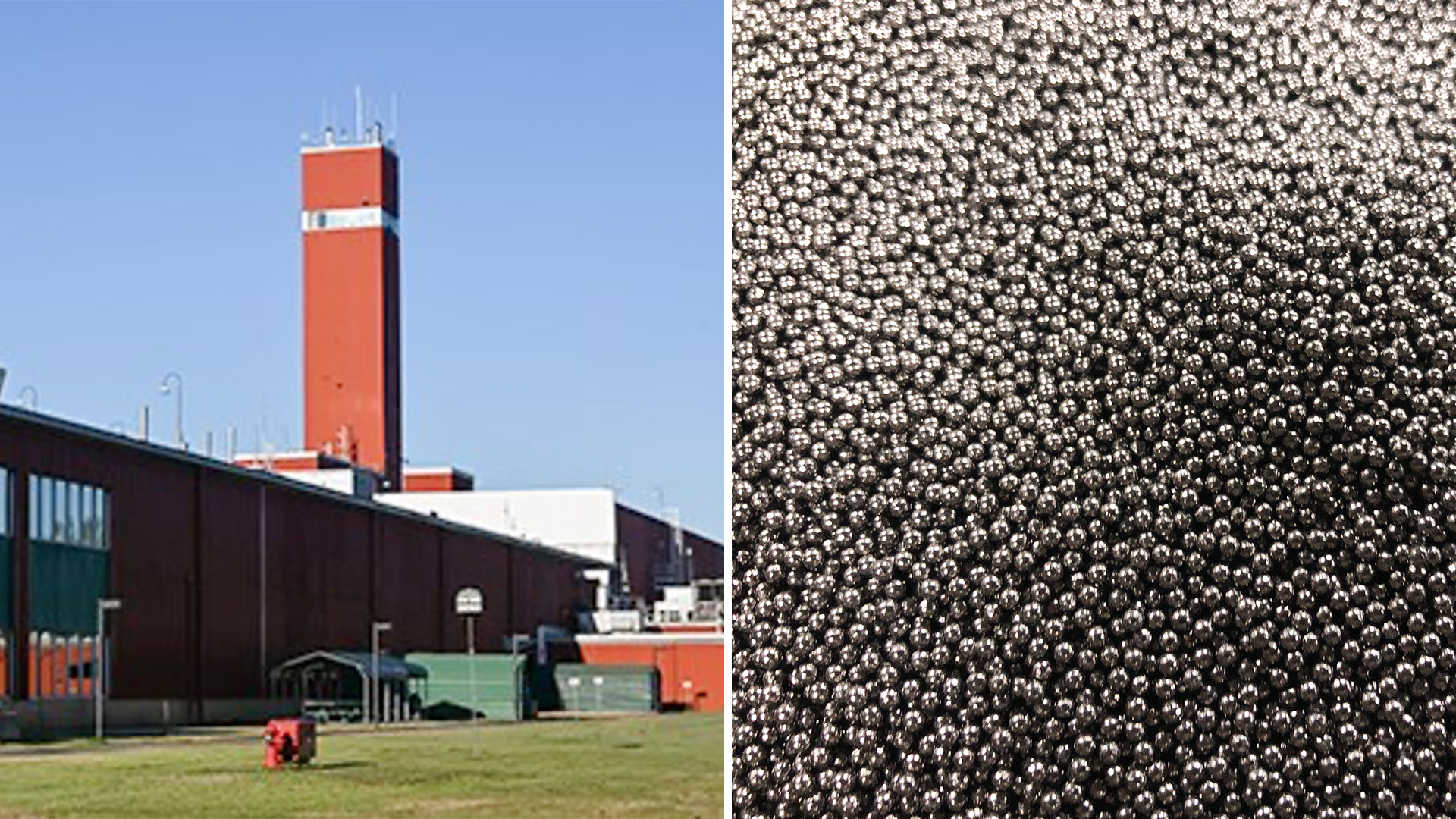 Remington’s 11-story shot tower dominates the Lonoke, Ark., facility. Not far from where they started life as lead bars, completed shot (right) is stored in large bins near the bottom of the shot tower.

As for shellmaking, it begins with strips of metal (pure brass or brass-plated steel) to make a cap. To create the shell body, tubes of raw plastic are stretched in long water baths. Next, the shell and cap are locked together with a primer in the aptly named “assemble head and prime area.”

Headstamped and primed shells then head to loading machines for filling and crimping. Completed ammo is loaded into the familiar green boxes and run through a conveyer belt. Assembly line robots picking completed rounds are about 90 percent accurate, so a human performs one final check. Loaded ammo boxes are placed on pallets and sent out the door to retailers around the country. 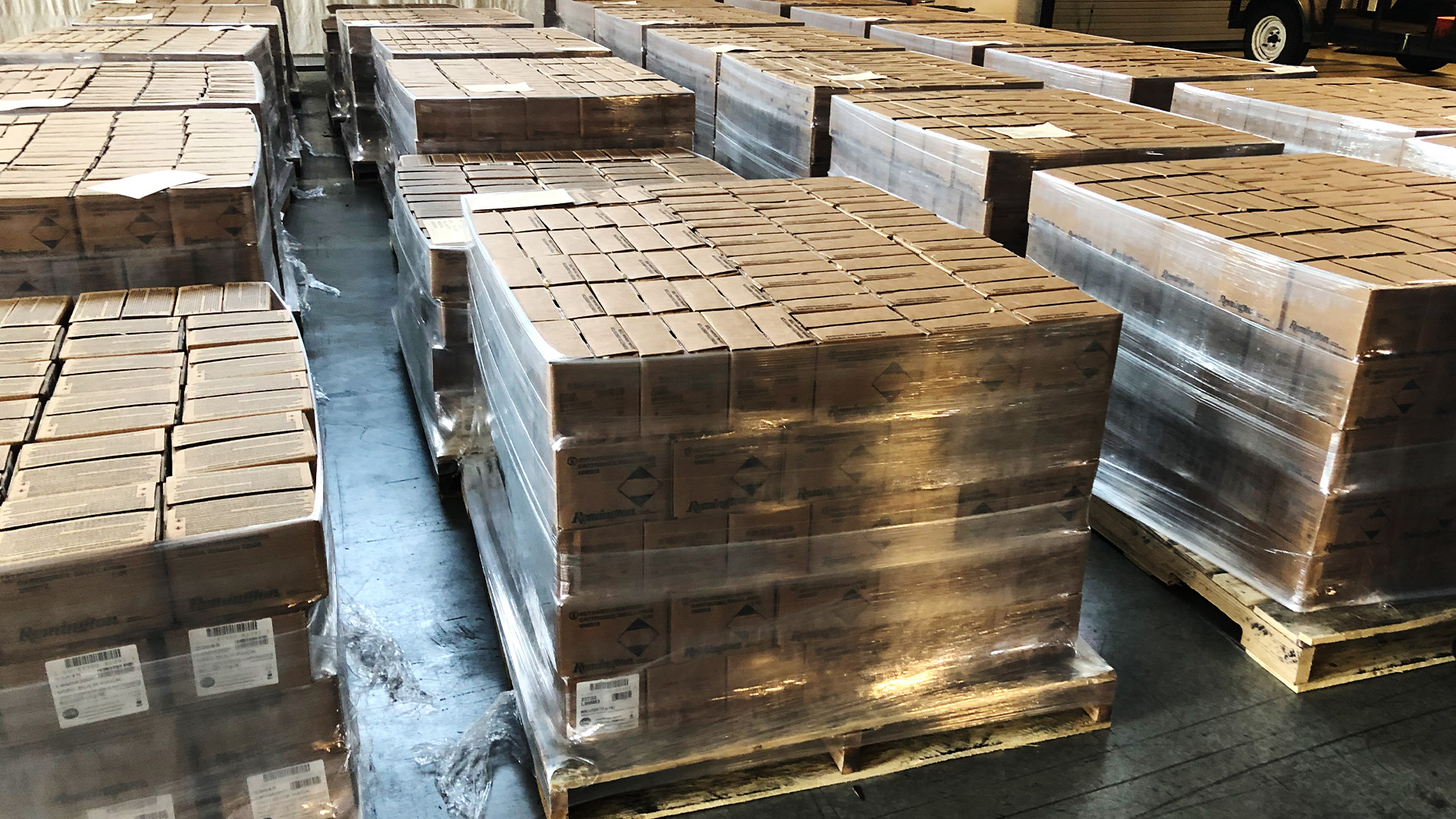 After manufacture, pallet loads of full ammunition boxes are ready for distribution around the country.

Every factory employee that I had the pleasure of meeting was a longtime Remington worker, with skills matching their passion for the legendary brand. Each also beamed with pride as they emphasized the countless quality checks during ammo production.

Leaving the plant, it was reassuring to discover that one of the ammunition world’s biggest names is here to stay—honoring its immense legacy of innovation, all while looking ahead to a better future.

For the millions of die-hard Remington Ammunition fans, know that manufacturing operations are in full swing and quality control is second to none. The hardworking employees at Remington Ammunition are laboring 24 hours a day, seven days a week to ensure Big Green’s ammo boxes are on store shelves around the country. Learn more at Remington.com.