Christensen Arms of Gunderson, Utah, specializes in building precision sporting and hunting rifles including bolt-actions and AR pattern platforms. At the 2020 SHOT Show, the company launched a rimfire rifle dubbed the Ranger 22. I was at the show that year. When I saw the Ranger 22 on the rack I was intrigued, but when I picked it up for the first time I was convinced I had to take it for a test drive. I’m glad to report that my time spent testing this handy little bolt gun yielded results that met and exceeded my first-impression driven expectations.

The Ranger 22 is a rimfire bolt-action rifle that adheres to the same three core design principles as this company’s premium centerfire rifles. It is ruggedly built, it employs quality weight reduction components and accuracy is a top priority. They stick as close as possible to the key features and controls of their light weight hunting guns so that the transition to the rimfire feels more intuitive. The judicious use of carbon fiber, aluminum and composite materials gives this .22 LR a listed starting weight of 5.1-lbs. The rifle I worked with was lighter than that, weighing in at just 4-lbs., 6-oz., with the empty magazine in place.

The Ranger 22 is essentially a reduced scale version of the company’s light weight centerfire bolt-actions.

At the heart of this .22 LR rifle is a precision receiver machined from a billet of 6061 aluminum. It is outfitted with dual opposing steel locking lugs and treated with a Type 3 hard-coat black anodized finish. The top of the receiver is fitted with a removable 6.5″ long Picatinny optics rail. The bolt handle is on the right side of the receiver and features a fluted aluminum knob. The 18″ long free-floated bull barrel is made by Christensen Arms. It’s a light weight, tensioned carbon fiber configuration which is hand lapped. It features six-groove 1:16″ twist rifling, a Bentz match chamber and a muzzle threaded at 1/2×28″ TPI to support a variety of popular muzzle devices. The rifle ships with a matching aluminum thread protector installed. 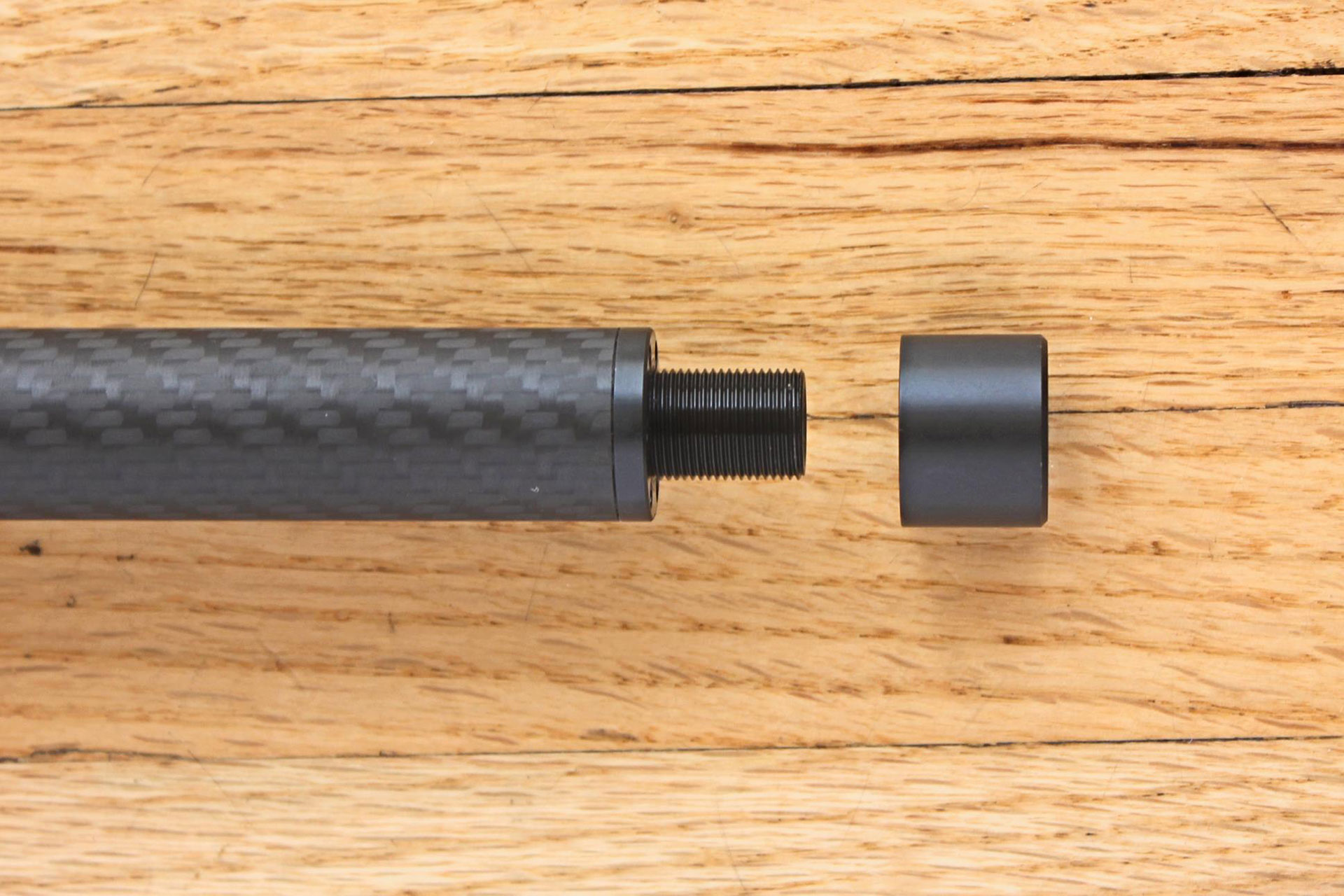 The one-piece polymer bottom plate is secured by a pair of hex head bolts. It incorporates the magazine well, an extended aluminum magazine release lever and an oversize trigger guard. The company opted to configure this gun to accept affordable, reliable and easy to find Ruger 10/22 compatible magazines. It arrives with a single Ruger BX-10 magazine which holds 10-rounds and fits flush with the magazine well.

The trigger group is a Remington 700 style, drop-in upgrade made by Trigger Tech. It’s the Field single-stage model with a grooved bow trigger and an adjustable trigger pull weight range of 2.5 to 5.0-lbs. A Lyman’s digital trigger gauge measured the tested trigger weight at 3-lbs. 11-oz. However, the trigger’s arch of travel is so short, clean and crisp that it felt lighter. The trigger group supports the left side thumb safety lever which is pulled back into the Safe position and pressed forward for the rifle to fire. The bolt assembly can be cycled and removed with the safety engaged. 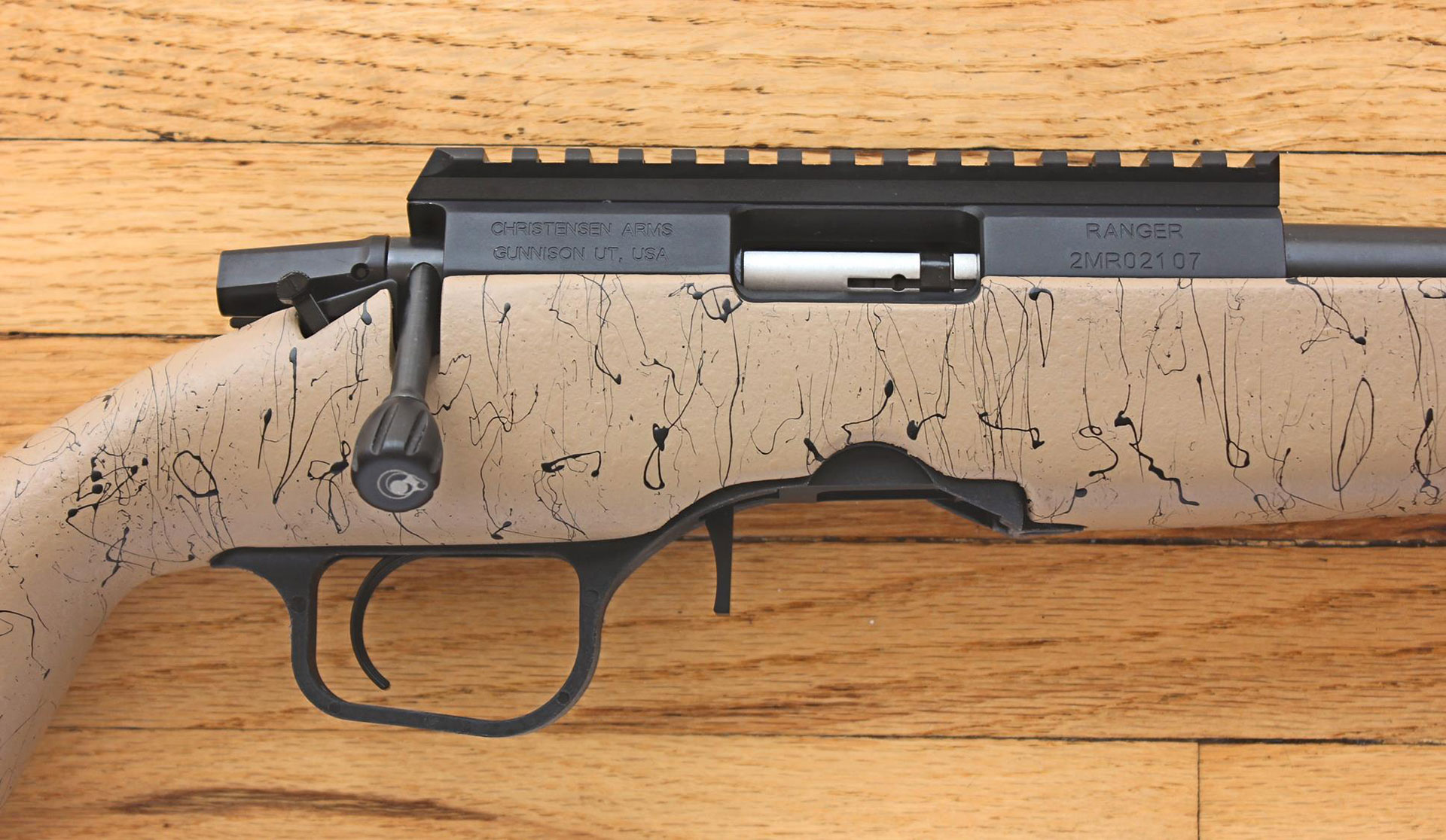 The bolt operation and trigger are Remington 700 pattern components while the extended magazine release and magazine are borrowed from the Ruger 10/22.

The ambidextrous shoulder stock is composed of a light weight, weather resistant composite material. The gun shown here has a tan finish with a lightly applied black drizzle pattern the company calls ‘webbing’. The flattened forend is well suited to sand bag rests and the pistol grip is curved and swelled for a comfortable stock-to-hand fit. Other features include front and rear sling swivel studs, a textured soft rubber recoil pad and a 13.75″ length of pull (LOP). 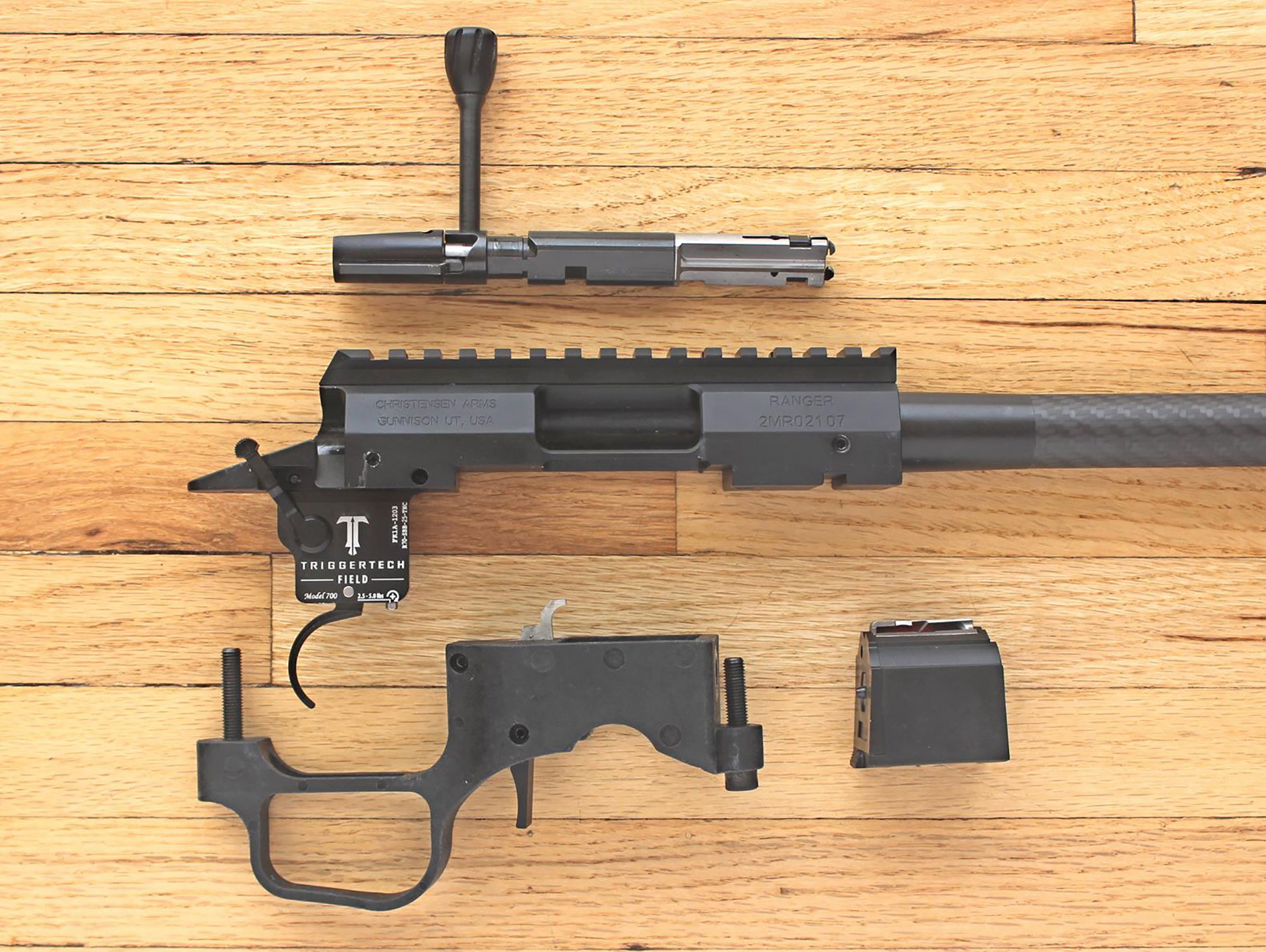 The highest compliment I can give this premium rimfire is that the Ranger 22 gets out of the way and lets you focus on your shooting instead of running the gun. It’s so nicely balanced and swings up so naturally that it becomes an extension of the body. The reduced weight barrel and stock nearly eliminate any sense of muzzle weight. The action and controls cycle smoothly and the trigger pull is so short and clean that it feels more like it’s thought activated than finger actuated. The shaping of the stock’s pistol grip guides the shooting hand into an intuitive, just-right position for proper trigger finger placement. In short, this .22 LR rifle is among the most enjoyable to work with that I’ve tested so far. And that was before conducting the formal, bench rested accuracy testing.

The rifle operated flawlessly with all ammunition tested. There were no mechanical or ammunition related issues during the bench check or the course of testing. The gun was test fired with a mix of magazines, including 10, 15 and 25-round models manufactured by Ruger, Butler Creek and Black Dog Machine. The receiver was topped off with the top notch (but discontinued) Bushnell AR Optics 2-7×32 Rimfire Rifle Scope with a Drop Zone-22LR BDC reticle. It’s probably time to update this optic, but I’ve been shooting with it for over 6-years now and I’m reluctant to give it up just yet.

This view of the composite stock with the action reveals the deep curvature of the grip and the aluminum pillars that support the action.

The Ranger 22 ships with the Christensen Arms Sub-MOA Guarantee. This means the rifle is guaranteed to be capable of placing a 3-shot group within 1 MOA, or 1.047″, at 100-yards for the centerfire models or at 50-yards for the rimfire models. This left me with a bit of a quandary as to how I should go about conducting accuracy testing for this particular .22 LR. However, NRA Publications accuracy testing protocols often call for five 10-shot groups fired using three different loads of ammunition when working with rifles like this one. But the disparity between the averages of five 10-shot groups for three loads compared to one 3-shot group for one load seems too great to be able to determine if the rifle is operating within the Sub-MOA Guarantee. 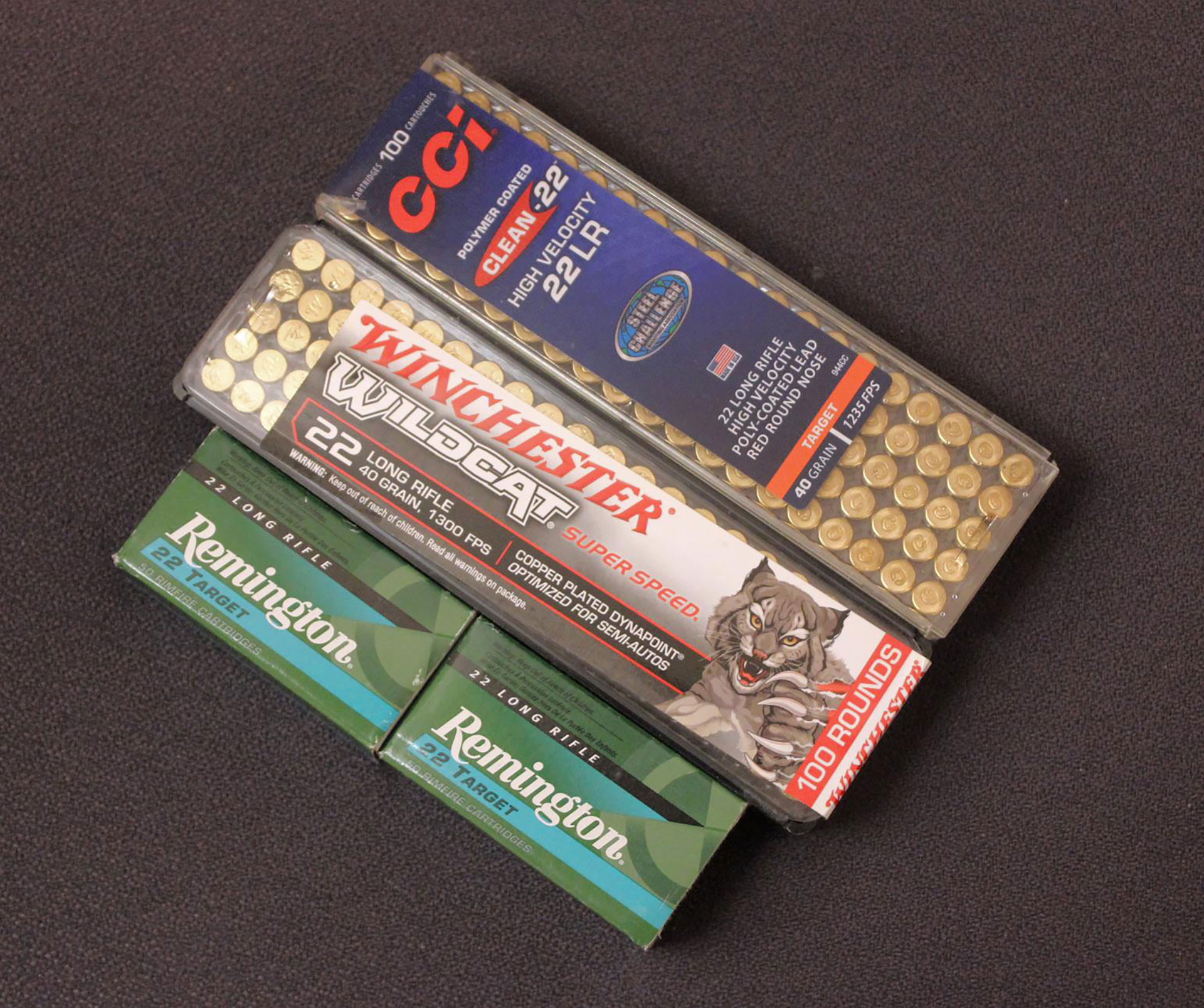 This rifle was tested with multi-purpose, target and hunting grade .22 LR ammunition.

I opted to split the difference between these two accuracy standards by firing bench-rested five 5-shot groups, using three different loads, at 50-yards. My range test experiences so far have shown that companies which put their reputation on the line with an accuracy guarantee can usually meet it or beat it with multiple 5-shot groups. That proved to be the case with the Ranger 22. Before continuing, it should be noted here that just like centerfire rifles loaded with factory manufactured ammunition, a precision rimfire is not going to knock out competition-grade accuracy with just any or all of the .22 LR ammunition currently available. Loads vary a good deal in regards to quality (practice grade or premium loads), bullet types and bullet velocity, all of which affect down range accuracy. So, it takes time at the range with a variety of loads to find out which ones will shoot the tightest groups. 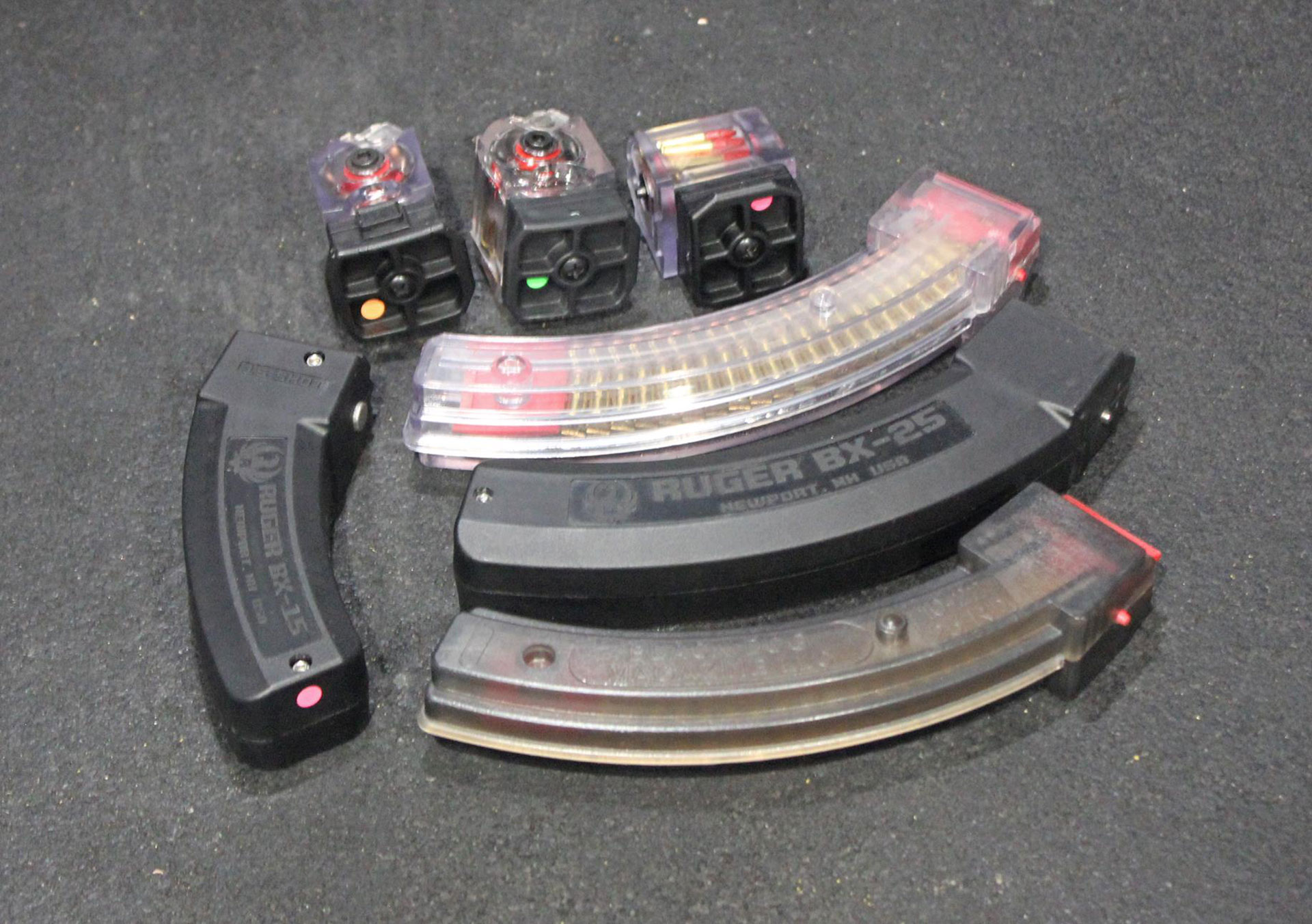 Not all of the aftermarket magazines designed for 10/22 style rifles are compatible with all of the guns available. However, all of the magazines tested with the Ranger 10/22 proved to be reliable.

For formal accuracy testing, I selected a speedy hunting load, a high-velocity multi-purpose load and a slower moving target-grade load, all of which are a good fit for a rifle intended for use in the field as well as bench-rest shooting. Winchester’s Wildcat Super Speed load launches a 40-gr. copper-plated hollow point at a peppy listed muzzle velocity of 1,300 f.p.s. It printed a best single 5-shot group of 1.16″ with a five group average of 1.32″. The CCI Clean series fires lead round nose bullets with a polymer coating that covers the entire bullet to reduce barrel fouling. The high velocity 40-gr. load (red bullet coating), which has a listed velocity of 1,235 f.p.s., yielded a best group of 1.13″ with an average of 1.24″. Remington’s 22 Target 40-gr. lead round nose launches at a more sedate 1,150 f.p.s. This was the load of this test set that rang the sub-m.o.a. bell. All five of the 5-shot groups were under 1.047″ with the largest single group measuring 1.01″. The best single group was 0.79″ for a five group average of 0.90″ 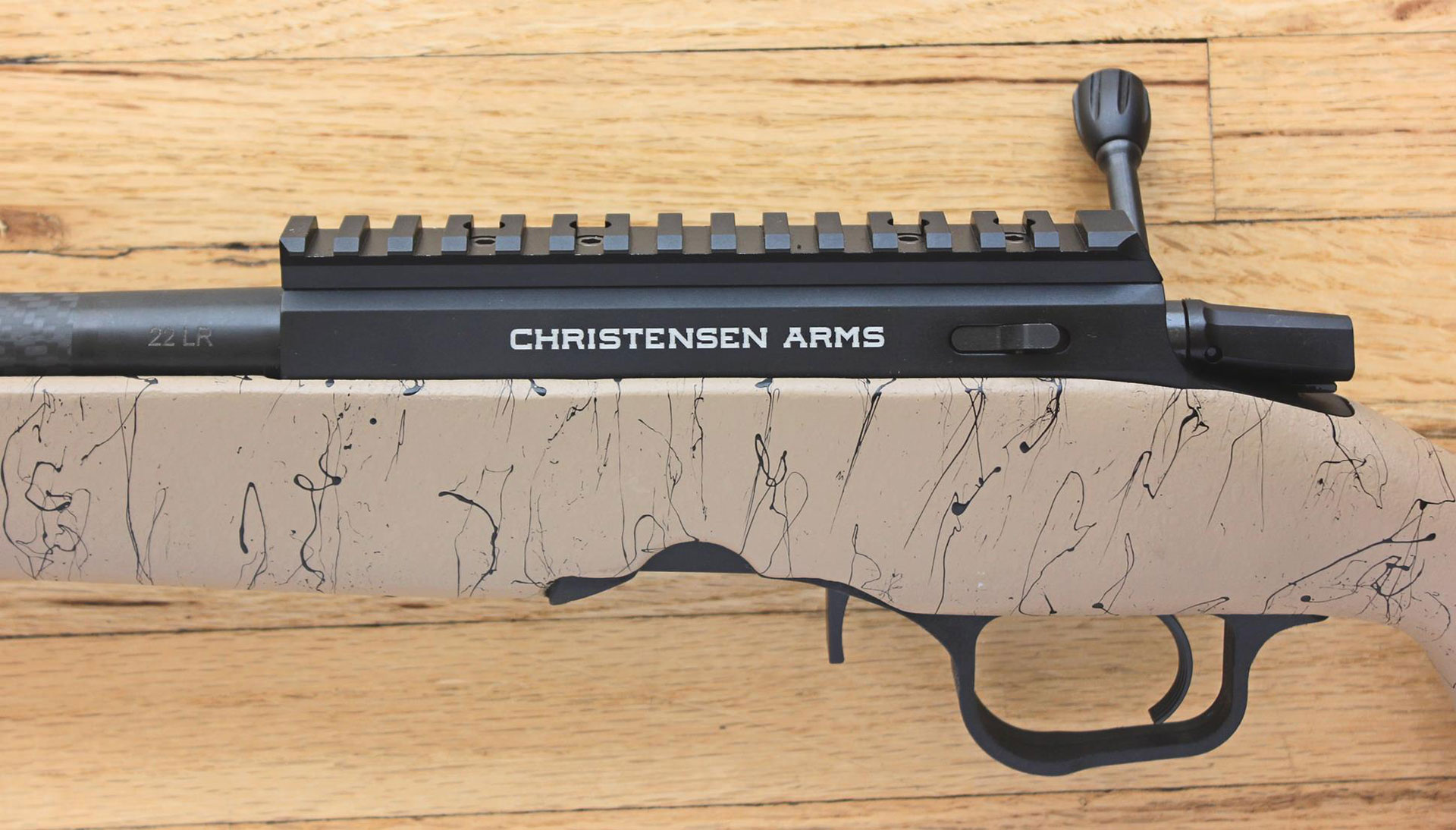 A close-up view of the company name engraved into the left side of the receiver.

The Christensen Arms Ranger 22 neatly checks off all of the boxes on the checklist for well made, multi-purpose rimfire rifles. This is a well balanced, multi-purpose bolt-action that can comfortably traverse the roles of bench rest, casual target shooting and small game hunting. This rifle costs more than the average off-the-rack .22 LR, but it’s not nearly as expensive as it could be. Christensen Arms understands how to build long guns that offer plenty of bang for the buck. Its low weight and easy operation make it an ideal training rifle for youthful and new shooters while being a great fit for seasoned trigger trippers looking for a .22 LR that can be enjoyed for thousands of rounds.