The world of belly bands just got a bit more interesting, thanks to the Liberty Band from CrossBreed Holsters.

For those who have never used a belly band, the idea is that you can still carry your normal EDC gun even if you are not wearing a belt. For example, if you go for a run, hit the gym, mow the lawn, or wear anything that does not include a belt, you won’t have to go about your daily life unarmed. And because belly bands tend to be universal, they will fit just about any typical handgun you normally carry.

CrossBreed just introduced their Liberty Band as the latest addition to their belly band lineup, and it looks like another great product from the Springfield, MO-based holster maker.

For years, CrossBreed has had their Modular Belly Band system, which includes a wide, stretchy band with loop fields that accommodate a whole host of their Kydex holsters with hook backings. This system works great if you only want to use CrossBreed’s proprietary holsters. The Liberty Band builds upon that legacy and allows you to use other holsters within CrossBreed’s lineup and just about any other holster you already have. 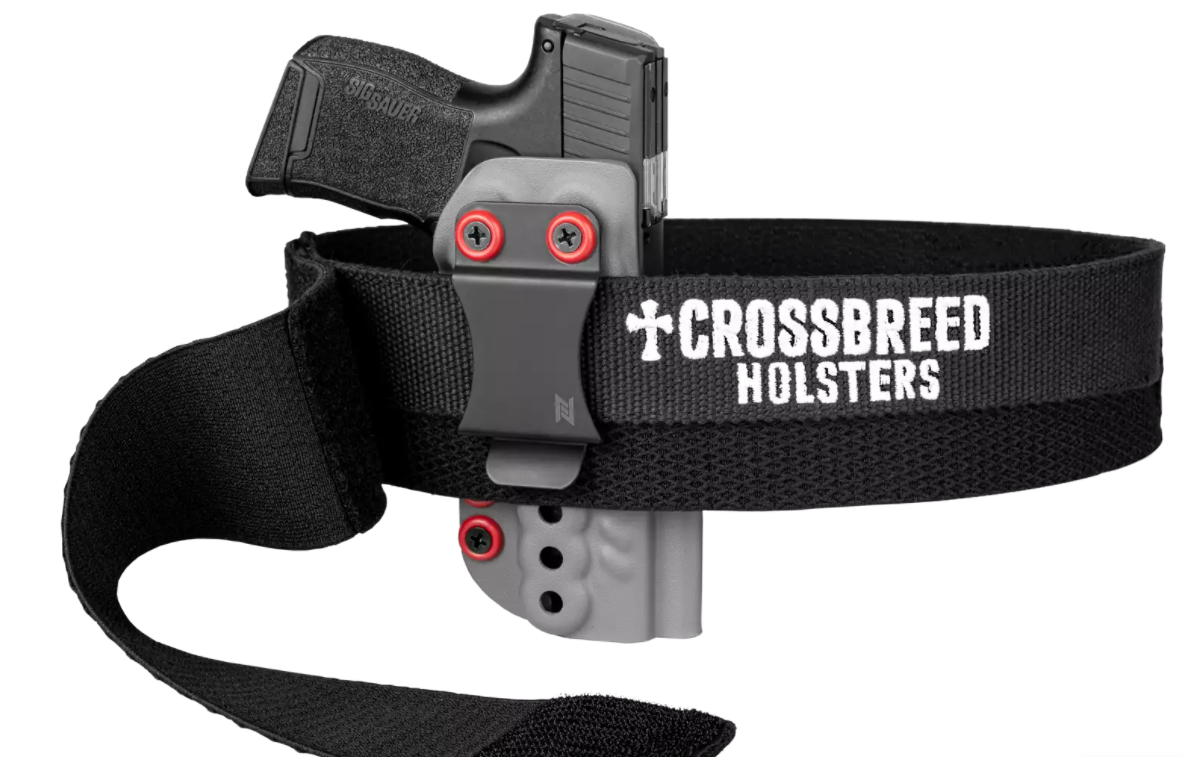 With Crossbreed’s Liberty Band, any standard holster can be used to secure your firearm.

The Liberty Band is constructed from a nearly 2-inch-wide swatch of nylon and rubber blend that lets it stretch around the waist without requiring specific sizing. Most of the band is a single layer, but patches of hook and loop are strategically placed for fastening the band once you have it on. The final foot of the band is double-layered halfway up to allow a stiffer platform for attaching 1.5-inch holster clips.

Unlike the Modular Belly Band, the Liberty Band does not come with a Kydex shell, which might at first seem like an oversight, but therein lies the genius of the design: you’re not confined to only one holster. Instead, the Liberty Band’s universality lets you attach pretty much any clipped IWB holster you want, so long as the clips are 1.5 inches wide.

Putting the Liberty Band on is super simple. Just stretch it out around your middle or wherever you want to position it, slide the holster clips over the thick part (conveniently marked with the CrossBreed logo – well played, marketing department), and fasten the last hook and loops fields together over the top. That’s it.

Like every belly band, how well it stays put depends on your shape and how tightly you pull it together. The beauty of the Liberty Band over belly bands with fixed holsters is you can rotate it around your middle to your optimum carry position. Like it front? Okay. Rotate to the side? That works, too.

The Liberty Band comes in black or nude (not sure why they didn’t call it tan or FDE) and runs $34.95 on CrossBreed’s website. At that price, you can afford to buy several holster shells to go along with it and turn it into a regular carry option.

Mossberg: A Family-Owned Company That Lives On