The Turkish firearm-manufacturing industry has been around for a long time, dating back to when the Ottoman Empire was a superpower. In recent years, it seems like the Turkish gun industry is on a bit of a come-up, exporting hundreds of thousands of guns each year to the United States, especially the Canik TP9 line of pistols. Eager to offer some competition to the Canik, Girsan’s MC9 lineup is being imported by EAA at a price point many people will find attractive. But, it’s 2021, so you can’t just import a bare-bones, polymer-frame, striker-fired, 9 mm pistol; no, you need something that’s red-dot ready and has competition features. Say hello to the Girsan MC9TV Match.

Before we continue this article, we’ll need to clear up a little confusion about this gun’s actual name. According to EAA (the importer’s website) this gun is actually called the Girsan MC9 Match TV, or possible MC9TV Match (the website lists it both ways). However, the slide has MC9 T engraved on it, no “V” or “Match” anywhere. That’s OK, albeit a little confusing, so we’re going to stick with MC9 T, since that seems to be the most common reference.

Now, onto the gun itself. The MC9 T is absolutely an upgrade over the standard MC9, with a longer barrel, go-fast cuts in the slide, a magazine-well funnel, a nicer trigger, the proprietary Far-Dot red-dot sight, an extended mag release and a takedown lever that’s intended to double as a thumb rest to help control recoil. All of these features add up to give the MC9 T the appearance of a purpose-built competition pistol. But, the question is whether or not they work—is the MC9 T a Honda Civic Type R, or an old beater with a big plywood wing and loud muffler?

In testing, the hinged trigger proved nearly perfect in terms of pull weight and smoothness • While the front sight is a fairly standard, dovetail-mounted post and dot, the rear sight is a notch in the included Far-Dot red-dot optic surrounded by two red fiber-optic pipes • Both the slide stop and manual safety are ambidextrous, making the pistol appropriate for both righties and southpaws • Two 17-round magazines ship with the MC9 T • Lightening cuts in the slide add flair and help reduce weight, but are not overly flashy or obtrusive.

The only way to answer that question is to take the gun to the range. Due to the ongoing ammo panic, only three brands of 9 mm were available for accuracy testing: Federal American Eagle 124-grain FMJ, Federal Syntech 150-grain Action Pistol and Speer Gold Dot 124-grain +P JHP. The best performer was the Speer Gold Dot, shooting an average group of 2.1 inches at 15 yards when rested off a bag. Achieving those good groups was aided by the trigger, which breaks cleanly at 3.5 pounds. It’s clear that the trigger is trying for that “glass-rod break” that’s beloved by fans of the 1911. The Girsan MC9 T actually does a pretty good job of accomplishing that goal. Groups were hindered a little by the bloom coming from the red-dot sight’s reticle, but more on that later.

In action-shooting drills, the Girsan performed just as well as I’d expect a polymer-frame 9 mm from a better-known manufacturer to perform. The only issue was with the combination takedown lever/thumb rest. I had another shooter test the gun in rapid fire, and we both found the lever to be extremely uncomfortable after just a few shots. Its profile doesn’t actually lend itself to use as a thumb rest and the top edge is sharp, jabbing into my thumb during any string of fire with multiple, fast shots. This could be fixed by swapping it with the standard-size takedown lever on the regular Girsan MC9, or by filing the sharp edge down—which most likely would void the warranty.

Disassembly for cleaning and maintenance is simple and similar to most other striker-fired handguns • Grip texturing is effective without being overly abrasive. The MC9 T ships with three backstrap inserts to help customize fit • A flared mag well makes fast reloads a cinch • The included Far-Dot reflex sight makes the MC9 T ready to go out of the box, although the author found this MRDS wanting for high-level competition • A rail section on the dustcover allows for mounting accessories.

All of the other physical features on the MC9 T are well done. The slide cuts are attractive and reduce weight without going over the top, the mag release really is positive and the magazine-well funnel definitely aids speed reloads. You’d need to remove the funnel for the gun to be legal for USPSA Carry Optics, but you could leave it on for IDPA Carry Optics competition. Like most polymer pistols, I personally wish the grip had more texture, but that won’t bother most people. If you really wanting a more textured grip, you could always send the frame to Boresight Solutions for its grip treatment. Both of the included magazines fed reliably and held 17 rounds, despite one of them having only 15 witness holes on it. In general, I found the Girsan MC9 T to be a reliable, easy-to-shoot pistol with a few quirks. There is, however, one shortcoming that can’t quite be called a quirk, though. 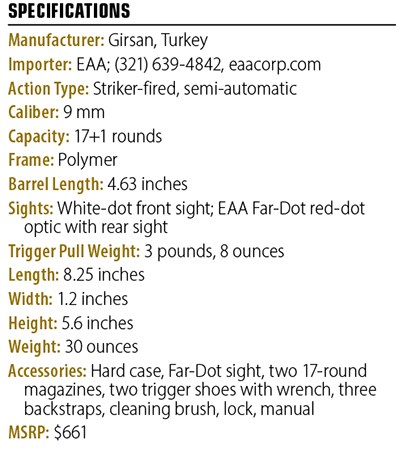 That would be the red-dot sight, which on EAA’s website is referred to as the Far-Dot. Let’s talk about the good features in the Far-Dot first. It sits low enough in the slide that it can co-witness the iron sights without using suppressor-height sights, and two little red, fiber-optic pipes are incorporated into the frame of the Far-Dot to act as a backup rear sight.

Everything else about the dot is deeply frustrating for a competitive shooter. The Girsan MC9 T comes with the Far-Dot installed, but there was no manual for the Far-Dot included in my box. I hope that’s just a one-time error, because after some extensive web searching, I discovered the dot was manufactured in China, and I couldn’t find a manual anywhere online for it.

It is adjustable for windage and elevation: if you have one and you’re wondering, the top “knob” adjusts elevation and the “knob” on the side of the housing adjusts windage. The “knobs” don’t have clicks—they just sweep and the dot moves, so zeroing was … an exercise in patience. It also seems to have fixed brightness, which was fine outside in direct sunlight. On an indoor range and in low light, however, it had an enormous bloom that made it hard to use accurately since the blooming dot covered too much of the target.

Last, because there’s no manual for the optic, there’s no way of knowing what footprint it utilizes on the slide, so even if you wanted to toss it into the sun, you have no idea what dot you can buy that will fit the slide cut. See? Deeply frustrating. I will say this, though: during all the firing with the pistol, the Far-Dot didn’t fail, didn’t shut off and didn’t lose zero. So, most people might be less frustrated if they use this optic primarily for defensive purposes or plinking.

Normally in an article about a pistol, we wouldn’t detour that much into the sighting system, but in this case it’s important because the Girsan MC9 T, which I genuinely like, comes with the Far-Dot included, and I genuinely don’t like the Far-Dot. The good news is that even with the Far-Dot installed, the MC9 T has an MSRP of only $661, which is in line with what you’d pay for an MOS Glock and a lot of other pistols without an optic. The Far-Dot would likely be a good choice as a starter optic for new shooters or those trying competition for the first time, but who don’t want to break the bank. Buy the MC9 T, shoot a couple of matches with the Far-Dot, then replace it with something else that fits that slide cut.

In summation: like the gun, don’t like the dot. For the price point, you get a lot of really clever features packed into the Girsan MC9 T. The trigger is great—especially for an out-of-the-box, striker-fired pistol—and it’s got accuracy to spare. To bring things back to the car analogy, it’s not a brand-new Honda Civic Type R, but it’s not a clapped out junker with a big plywood wing, either. It’s more like someone took a nice Civic, added some smart touches like good tires and better brakes, and then bolted a crazy wing on it (hint: the Far-Dot is the crazy wing). I like it, and if someone only had $600 to get into Carry Optics competition, it might be just the right choice.

The Rifles of Cecil Brooks

How to Select the Best Gun Belt for Everyday Carry