Israel Weapon Industries (IWI) prides itself on specializing in innovative designs for use by law enforcement officers, military personnel and security-conscious armed citizens, and the company has certainly succeeded in creating an interesting twist on the tactical shotgun in the form of its semi-automatic Tavor TS12.

Utilizing a bullpup configuration, a magazine that consists of a trio of rotating tubes nestled under the barrel and the extensive use of polymer in its construction, the TS12 is a paragon of outside-the-box thinking in a firearm segment that usually trends toward the traditional. But don’t let the TS12’s unorthodox aesthetics fool you; this is a serious shotgun that offers several advantages compared to conventional designs. 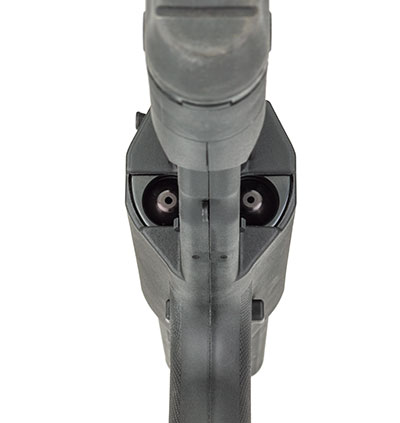 Thanks to the orientation of the TS12’s tri-tube magazine design, and loading ports on each side of the receiver, those tubes not aligned with the barrel can be easily topped-off by the shooter.

The IWI TS12 is a semi-automatic 12-ga. shotgun with a 3″ chamber that operates via a short-stroke gas piston. The piston has two settings that control the amount of gas that is siphoned off each shot to operate the action: “L” for light shotgun loads and “H” for heavier ones. Holes on either side of the receiver allow the gas piston to be adjusted in only seconds.

Bullpups are firearms configured with the action located behind the trigger group in the space normally reserved solely for the buttstock. Relative to a standard design, this setup produces a much shorter gun overall while allowing for a conventional barrel length. As such, the TS12 takes advantage of an 18.5″ barrel, yet in a package that measures just 28″ in total length—7″ to 10″ shorter than most tactical shotguns. The unloaded weight is a reasonable 9 lbs., 2 ozs., and the gun possesses a very butt-heavy balance.

Another advantage of the TS12 is in the amount of ammunition it carries—a frequent criticism levied at shotguns—as the IWI feeds from three five-round (2¾”) magazine tubes for a total topped-off capacity of 16 shells. Switching from tube to tube is easy thanks to a large activation paddle set forward of the trigger within the trigger guard that unlocks the magazine assembly so that it can rotate.

The textured tubes can be moved in either direction around the longitudinal axis of the shotgun, and a loading port on each side of the receiver allows the two magazines not currently in use to be filled back to capacity. For right-handed users, our advice is to rotate the cylinder counterclockwise so as to expose an empty tube to the left side of the shotgun for more convenient recharging with the off hand (clockwise for southpaws).

The TS12 comes from IWI configured for right-side ejection with a left-side charging handle (l.), but it can be converted for left-handed use by the factory. The gun’s two-setting gas piston (r.) can be quickly adjusted via a slot on either side of the fore-end.

In its standard configuration, the TS12 ejects through a right-side port and makes use of a left-side charging handle. The shotgun can be converted for left-side ejection, however, the company recommends that the firearm be shipped back to IWI US for conversion. The TS12 features a 13″ Picatinny rail screwed to the top of its receiver, and the shotgun is set up ergonomically to utilize AR-height optics atop this rail. No sights come with the shotgun, and it would have been nice to at least have a set of basic pop-up irons ship with the gun so that it is ready to go straight out of the box.

IWI has incorporated a shell-release button into each side of the receiver, just to the rear of the loading ports, which allows the user to manually eject a shell from the corresponding magazine. Tactically speaking, this would allow for a specific type of ammunition to be loaded, and its placement at the rear of the tube ensures that it is the next shell to chamber once the proper tube is rotated back into position. These buttons also allow the shotgun to be emptied without the need to manually cycle the action up to 15 times.

The TS12’s safety is a crossbolt design easily manipulated with the trigger finger, and a bolt-release button is located just below the ejection port on the right side of the receiver. Additional features include M-Lok-compatible slots on each side of the fore-end, four QD sling cups (two at the shotgun’s butt and two just to the rear of the charging handle) and internal muzzle threads compatible with Beretta/Benelli MobilChoke-style tubes—improved cylinder and modified chokes come with the gun. 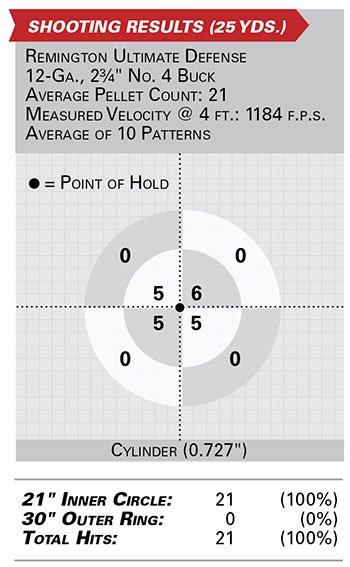 Bullpups in general are notorious for poor triggers because of the long linkage required between the trigger proper and the sear. And while the trigger on our test TS12 wasn’t great, we’ve also encountered far worse. After about 1/8″ of take-up, and a moderate amount of creep, the trigger broke on average at 11 lbs., 9 ozs., of pressure. While this would be unacceptable in a precision firearm, we found it to be quite passable on a tactical scattergun.

Early reports seemed to indicate that the TS12 was finicky with lighter 12-ga. loads, but that was not evident in the sample we received for this evaluation. A total of 400 rounds were sent downrange—a mix of birdshot, 2¾” buckshot, slugs and 3″ magnum buckshot—and the shotgun experienced no stoppages regardless of load. The TS12’s gas operation and well-designed ergonomics, including a wide rubber recoil pad, did help to manage its kick a bit, but 12-ga. recoil is stout nonetheless, and anyone suggesting otherwise should be scrutinized. For pattern testing, Remington’s 21-pellet Ultimate Defense No. 4 buckshot was used, and at 25 yds., the shotgun’s cylinder-bore barrel generated tight, well-centered patterns that averaged between 10″ to 12″ in diameter—results pretty much perfect for close-quarters defensive use.

Bullpup-style firearms have always generated strong opinions both for and against, but traditionalists shouldn’t let the IWI Tavor TS12’s unorthodox appearance dissuade them from considering what our testing has revealed to be a reliable and potent short-range tool. The shotgun makes good use of the inherent advantages of the bullpup layout, and—thanks to its rotating magazine design—offers far greater capacity than its compact size would imply. 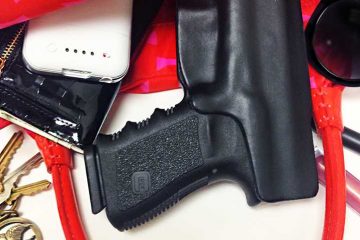