While 6.5 mm Creedmoor took close to a decade to really catch on, that doesn’t seem to be the case with the 6.5 mm PRC. Both developed by Hornady, this “magnum” Creedmoor boasts higher velocities, flatter trajectories and greater downrange energy than its older brother, all without a major increase in recoil or the need for a longer action. But the question has always been, “When will affordable guns be chambered in it?” Mossberg has answered that call with its Patriot LR (Long-Range) Hunter.

The LR Hunter is a bolt-action, centerfire, repeating rifle that feeds from a detachable box magazine. Its carbon-steel action is mated to a 24.1″ medium-contour barrel that is cut with 5R rifling—in the PRC-chambered rifles, it is rifled to a twist rate of 1:8″. Exterior barrel features include deep longitudinal fluting for weight reduction and increased cooling, a 5/8×24-TPI threaded muzzle for the addition of a brake or a sound suppressor and a matte-blued finish to match that of the receiver.

Once assembled, this barreled action is set within a hybrid stock that is comprised of a beech-wood core covered entirely by a synthetic, polymer-based material. The stock is then finished with spider web micro-texturing throughout to enhance grip, particularly in moist conditions. Everything is held in place by a pair of action screws that lock the main contact points against aluminum bedding pillars, ensuring repeatable accuracy. The LR Hunter features a familiar two-lug, push-feed bolt—with a 90-degree throw—and its body is spiral-fluted to shave off a bit of weight and add a touch of flair.

The pull weight on the test sample’s Lightning Bolt-Action trigger could be adjusted from between 2 lbs., 2 ozs., and 5 lbs., 8 ozs., by simply turning one screw (arrow) on the face of its housing.

Before going to the range for accuracy testing, we turned our attention to the LBA (Lightning Bolt-Action) trigger system that comes standard with the Patriot LR Hunter. It features a safety blade that must be depressed before the trigger will fire, providing a measure of drop safety. The trigger is also user-adjustable, which is accomplished by removing the stock and turning a single screw clockwise to increase the required pressure to discharge the firearm or counterclockwise to decrease it.

Our test sample showed up from the factory at its lowest setting of 2 lbs., 2 ozs., and we were able to adjust it all the way up to a maximum pull weight of 5 lbs., 8 ozs. As our next stop was the range, we turned it back down to its lowest setting and re-installed the stock. 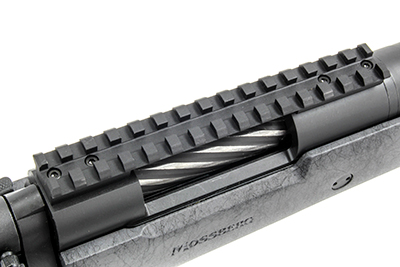 A one-piece Picatinny rail segment is screwed atop the Mossberg Patriot LR Hunter’s receiver at the factory to allow for the easy installation of an optic.

Disassembly was about as simple as it gets with a bolt-action rifle: After removing the magazine by pulling the forward-mounted release toward the trigger guard and cycling the bolt to the rear to ensure the firearm was unloaded, the bolt was removed by depressing the release located on the left side of the receiver and pulling it completely to the rear. Most scenarios won’t require more than this for periodic maintenance, however, if you are inclined to detach the action from the stock, it is as simple as removing the aforementioned action screws.

We were able to obtain samples of hunting ammunition from Federal, Hornady and Nosler that spanned a variety of common weights for this cartridge. From a rested sandbag position, we fired groups for accuracy while recording velocity and any notable characteristics. Chief among these was the Monte Carlo-style stock that positions the eye just a bit higher above the receiver than a straight comb would. We test-fired the rifle without any sort of recoil aid attached to the muzzle and were pleasantly surprised by how shootable it was. 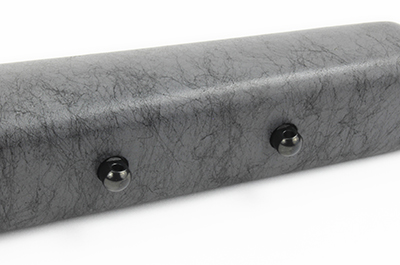 The flattened fore-end on the Patriot LR Hunter’s beech/synthetic hybrid stock lends itself equally well to irregular support in the field and sandbag use from the bench. A pair of sling-swivel studs allows for the simultaneous use of both a sling and a bipod.

After conducting formal accuracy testing, we engaged steel plates out to 500 yards in a variety of field positions. We found that, although the rifle has an overall length of 44.5″, it balanced and lent itself to irregular support quite well, thanks to its flattened fore-end. The fore-end is home to two sling swivels, allowing for the simultaneous use of both a bipod and a sling. During both stages of testing, the gun fed, fired and ejected every round without any issues.

While the accuracy that our test sample exhibited was not superb, it would be adequate for big-game hunting out to several hundred yards. On the other hand, several of our testers commented on the gun’s excellent ergonomics, and, even without a muzzle brake installed, the recoil of the 7-lb., 6-oz., rifle was easy to manage. 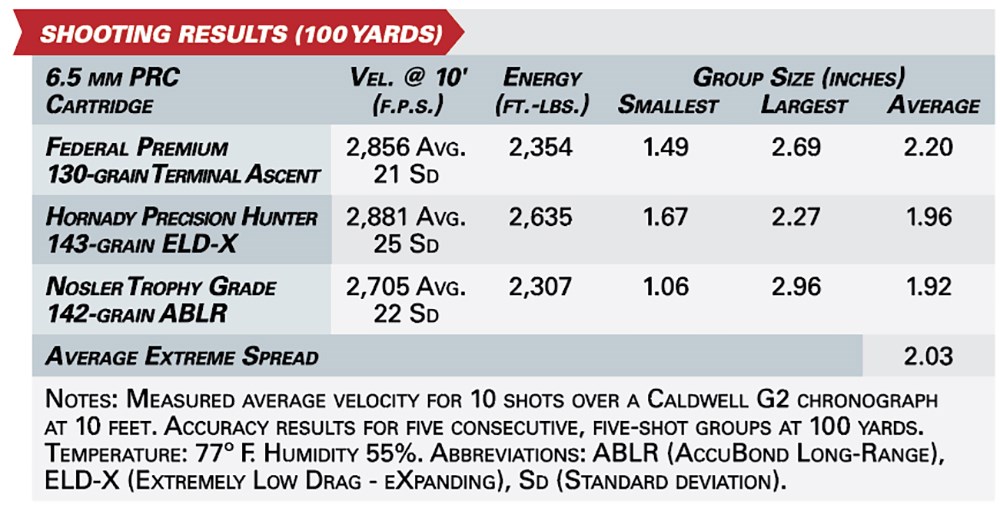 The ultimate goal in building a hunting rifle is to make one that is equally light on the back and easy on the shoulder. Mossberg succeeded on both counts with the 6.5 mm PRC-chambered Patriot LR Hunter, while—given its MSRP of $766—also making it relatively light on the wallet, too.

Marlin's Return Scheduled For The Holidays