The minuteman, our nation’s citizen-soldier who was ready to fight at a moment’s notice to loosen the chokehold of tyranny—risking everything for the promise of freedom and liberty—became our country’s first responders. Patriot Ordnance Factory has recently introduced the Minuteman, an appropriate name for an AR system designed for home and vehicular defense, and American Rifleman received a sample of the Minuteman pistol, chambered for the 5.56×45 mm NATO cartridge, for evaluation. While there are many AR-style pistols on the market today, few possess the innovations and quality of the Minuteman.

POF-USA’s Minuteman is an AR-style pistol that utilizes a direct-impingement gas system for semi-automatic fire. Although Eugene Stoner deserves credit for the basic AR design, POF’s recently deceased founder—Frank DeSomma—made a number of significant improvements to the platform designed to increase the life and durability of his guns. 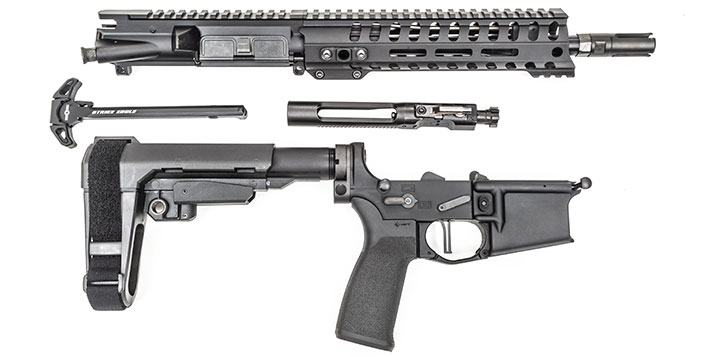 The Minuteman uses the company’s E2 Dual Extraction Technology that features four narrow channels cut into the neck area of the chamber. When the gun is fired, a small amount of gas vents onto the case’s shoulder, breaking the seal between the chamber and the case; this reduces the amount of work the extractor must do. A 3″-long heat sink barrel nut is also used on the Minuteman. The aluminum part encompasses the chamber and throat area of the barrel where most of the heat is, and the radially finned component dissipates heat 17 times more effectively than a G.I. barrel nut made of steel. 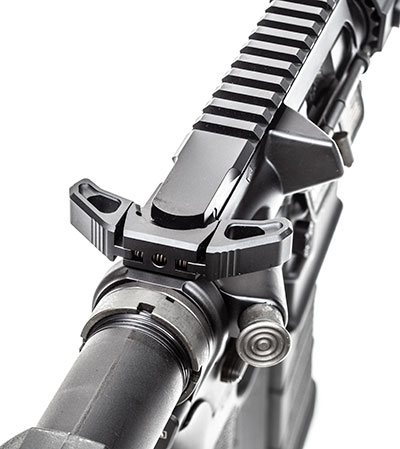 The Minuteman comes with POF’s bilateral Strike Eagle charging handle, allowing both right- and left-handed shooters to load the gun using either hand.

POF cuts its barrels with 5R rifling at a 1:8″ RH twist rate, and cuts the chamber to NATO specs. The 4150 chrome-moly-vanadium (CMV) barrel blanks are profiled in-house, and are nitride-heat-treated for corrosion resistance and longer life. The muzzle of the barrel is threaded 1/2×28 TPI, and is outfitted with POF’s effective three-prong flash hider.

The company manufactures its free-floating handguards in-house, and the Minuteman uses a shortened 9″ version of the Renegade handguard. It features an uninterrupted top rail and M-Lok cuts on three sides, with a section of Picatinny rail at the 6-o’clock position for bipod use. The handguard’s small diameter makes it comfortable to hold, and there are two spots, one on each side, for QD sling mounts—in addition to the QD sling swivel plate located at the rear of the lower receiver.

The Minuteman’s bolt carrier group features more POF innovations. For complete reliability, DeSomma designed the stainless steel gas key to be dovetailed into the carrier, and it is secured with a staked screw. Both the bolt and extractor are nickel-plated for corrosion resistance and the firing pin is chromed. POF’s patented roller cam is also incorporated on the bolt carrier. It replaces the square key of Stoner’s design with an NP3-coated roller head that reduces friction and drag, preventing scoring of the upper receiver and extending the life of all the parts, including the receiver.

An anti-tilt buffer tube cradles the rear of the bolt carrier group when the firearm is in battery. This design prevents premature wear from buffer tilt, and the buffer detent pin actually keeps the tube from unscrewing. In the case of the Minuteman pistol, an SB Tactical SBA3 arm brace is attached to the buffer tube. It offers the shooter five length-of-pull options and allows for a little more than 2.5″ of adjustability.

For precision shooting, POF specified the company’s flat-faced, single-stage, drop-in trigger for use in the Minuteman. There is very little take-up before it breaks crisply at 3 lbs., 8 ozs., of pressure, and we experienced nearly zero overtravel; it has a firm reset and proved to be great for rapid-fire shooting. The hammer, trigger and disconnect are all EDM-machined from A2 tool steel and then nitride-heat-treated for strength and corrosion resistance. KNS Precision non-rotating, anti-walk pins are used for a consistent pull, shot to shot.

To test the gun for accuracy, we used a Trijicon AccuPoint 1-4X 24 mm, set at 4X magnification and mounted in an American Defense Mfg. AD-Recon scope mount. We fired five shots to a group and five groups with each ammunition, with the results shown in the accompanying table. Our very best group was fired with Federal Premium 69-gr. Sierra Matchking BTHP bullets and measured just 0.87″ at 100 yds.—in fact, each of the three loads we tested produced at least one sub-m.o.a. group. The 15-group average extreme spread came to 1.17″, which is phenomenal accuracy for a 10.5″ AR pistol.

Reliability was 100-percent, and there were no failures of any type. During field testing we fired more than 200 rounds at steel targets staged from 25 to 75 yds., and found the pistol to be fast-handling, and we were able to make quick, solid hits. The firm reset of the trigger made very fast follow-up shots possible. 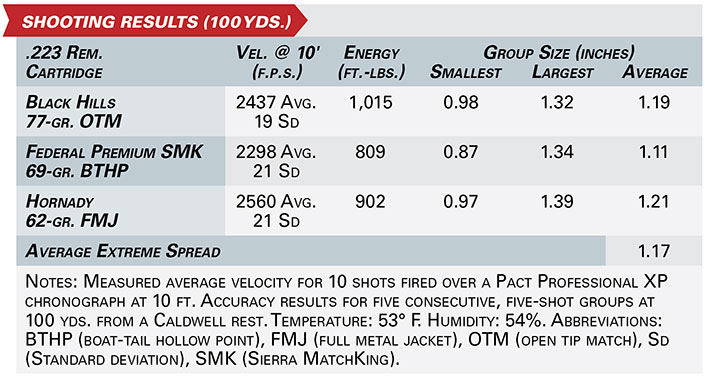 POF-USA’s Minuteman is an impressive gun possessing the reliability and accuracy needed to serve as a responsible citizen’s first line of defense for home or vehicle use. The firearm’s numerous innovations ensure it will be able to stand up to a lifetime of hard use and be ready to pass on to the next generation. The Minuteman Pistol is also available chambered in 350 Legend, and there is also a carbine version with a 16.5″ barrel in both cartridges. 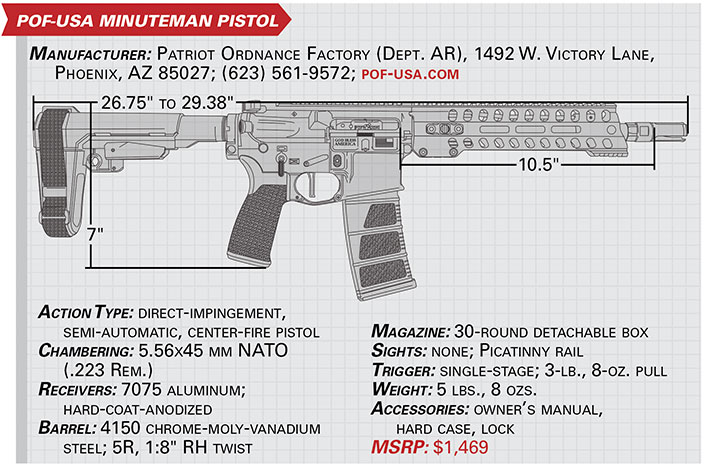