As a .308 Win.-chambered carbine built on an AR-15-length receiver set, providing users with all the handiness of an AR-15 while boasting the far greater firepower of an AR-10, Patriot Ordnance Factory’s Revolution broke new ground upon its 2017 introduction—enough so that we felt confident in awarding it the 2018 Golden Bullseye for Rifle Of The Year. During the years since its release, the company has continued to refine the platform, first by adapting the piston-driven Revolution into the direct-impingement Revolution DI, and now by offering the Rogue, a rifle that POF views as a dedicated hunting variant of the concept. And to the company’s credit, each new revision of the Revolution has both weighed and cost substantially less than its forebear, while retaining most of the innovations that separate POF’s products from run-of-the-mill AR-pattern rifles.

Weight reduction was a primary design goal of the 16.5″-barreled Rogue from the start, yet without needing to rely on the use of exotic materials or lightening cuts to the receivers in order to trim the ounces. While our test sample did turn out to weigh a bit more than the sub-6-lb. gun that POF’s marketing claims tout, with an empty weight of 6 lbs., 3 ozs., it is still supremely light for a .308 AR—weighing even less than most AR-15 carbines on the market. The Rogue’s weight loss relative to the Revolution DI’s 6-lb., 13-oz., heft was accomplished primarily through three ways: by thinning out the upper and lower receivers in non-critical areas, by using a slimmer contour of barrel and by including a shorter, 11.5″-long Renegade handguard.

Switching over to 7075 aluminum forgings rather than its predecessor’s machined billet receivers, while likewise doing away with the forward assist, also greatly decreased the amount of machining necessary to manufacture the Rogue, a major reason why the new rifle costs $800 less than the Revolution DI. However, whereas the lower of the Revolution DI is fully bilateral (with bolt releases, magazine releases and safeties on each side), the Rogue has the more standard setup of only a right-side magazine release and a left-side bolt release in addition to its bilateral 90-degree safeties. 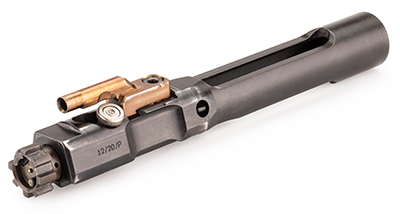 The Rogue’s Key-Lock bolt carrier group differs from most BCGs in that it has a roller cam pin that reduces friction and stress on the part and a dovetailed gas key.

Internally, the Rogue uses the same Key-Lock bolt carrier group (BCG) as does the Revolution DI, with its nitrided carrier, chrome-plated firing pin, and nickel-plated bolt head and extractor. Upgraded features that POF incorporates into this part include a roller cam pin instead of the more traditional rectangular cam pin, reducing friction and stress on the part, and a stainless-steel gas key dovetailed into the carrier to provide added rigidity and to minimize carrier tilt. Like the Revolution models before it, the Rogue also utilizes the company’s E2 dual-extraction system, whereby four shallow grooves cut into the neck of the chamber vent ignition gases rearward to push against the case’s shoulder, helping to break the seal and facilitating reliable extraction.

The Rogue’s 16.5″ barrel is made from 416R stainless steel. Owing to POF’s vision of the rifle as a sporting arm, the Rogue employs a faster 1:8″ twist rate than the 1:10″ twist of the Revolution models that came before it, for use with heavier hunting bullets, and during our testing the weightier two loads did, indeed, outperform the lighter one by a small margin. The rifle’s muzzle is threaded 5/8×24 TPI and capped with POF’s Micro B muzzle brake. Affixing the barrel to the upper is an oversize barrel nut designed to act as a heat sink, dissipating heat far more efficiently than the standard mil-spec part.

Another change that allowed the company to drop both cost and weight on the mid-length, direct-impingement Rogue is the use of a non-adjustable gas block, as opposed to the Revolution DI’s nine-position Dictator gas block (the sample shown here has a Dictator, stock Rogues do not). While this expedient does limit the rifle’s versatility a bit, it should really only be a major consideration for frequent users of a suppressor. 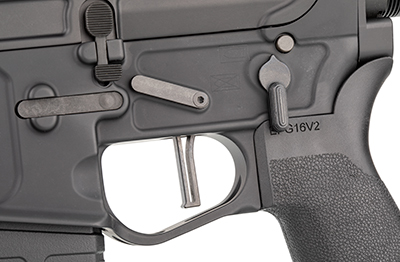 The single-stage, flat-blade trigger on our sample Rogue broke right at 4 lbs., with zero take-up or overtravel and an impressively crisp break.

The Rogue’s excellent flat-blade trigger is a single-stage, drop-in unit contained within a hardcoat anodized-aluminum housing. While POF advertises this skeletonized trigger to have a non-adjustable pull weight of 4 lbs., 8 ozs., our test sample was a bit lighter than that, with 10 measured pulls averaging right at4 lbs. Take-up and overtravel were both nil, and the break was about as crisp as we could ask for.

As far as furniture is concerned, the Rogue ships with a free-floating aluminum handguard with a Picatinny rail along its entire top face and the final 2″ of its 6-o’clock surface. It also features four M-Lok-compatible slots at the 3-, 6- and 9-o’clock surfaces and a pair of push-button sling mounts on each side. Attached to the rifle via a mil-spec, carbine-style receiver extension is Mission First Tactical’s Battlelink Minimalist Stock, which also contributes to the gun’s sylphlike weight. The carbine ships with one 20-round Magpul magazine, and no sighting options are included with the gun.

At the range, the Rogue proved itself to be 100 percent reliable, exhibiting zero malfunctions of any type through approximately 250 rounds. Although several of our evaluators were initially concerned that POF’s weight-reduction efforts might have pushed the carbine into “too much of a good thing” territory given its authoritative chambering, all the shooters had changed their minds by the end of the session. Recoil is not painful, but it is substantial, and all but the most rock-solid of shooters are likely to need to re-acquire their target following each shot. 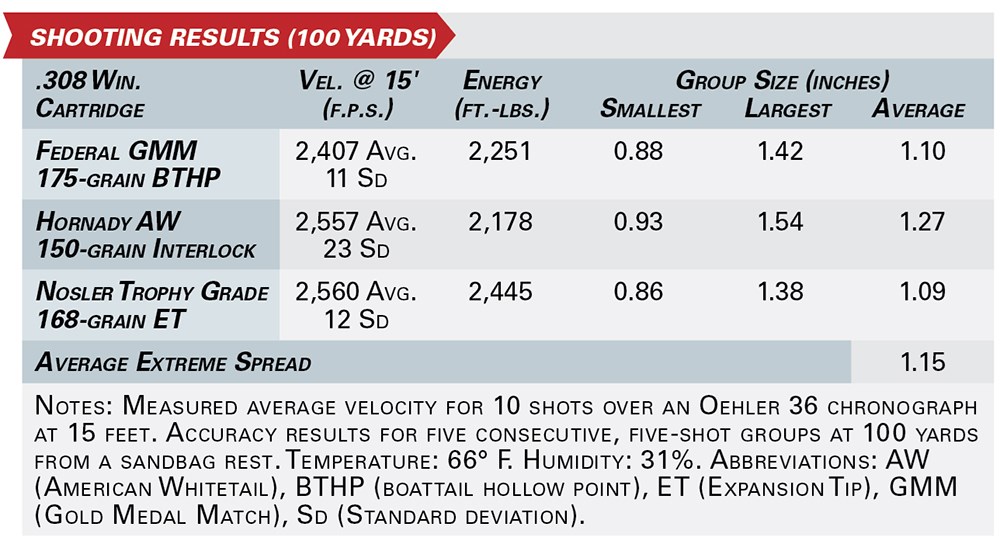 Accuracy through lightweight rifles can often suffer—both due to their thinner barrels heating up much more quickly and due to the added difficulty of shooting them well—yet the Rogue performed superbly in formal accuracy testing. Using two hunting loads and a heavy match load, across all three options the carbine produced an impressive five-shot, 15-group average of 1.15″ at 100 yards.

Each iteration of POF’s Revolution has thoroughly impressed us, and despite some of the line’s bells and whistles having been removed from the Rogue, the most important ones are still present. The company may see its feathery weight as a particular advantage to hunters, but we think it makes the platform all the more formidable as a defensive arm as well. This rifle offers a ton of bang for the buck, and while its price is still no chump change, the Rogue does not compare unfavorably to other .308 Win.-chambered battle rifles on the market today—few of which are anywhere near as easy to tote in the field.