When the folks at Springfield Armory mentioned that the company was working on a new pistol, I assumed it was going to be a line extension for the Hellcat or perhaps a new form of the XD platform. I could not have been more wrong. Well, that’s not true exactly, because there are line extensions in the Hellcat family and the like, but the handgun in question was an enormous departure from what we’ve gotten used to. It’s not a polymer-frame, striker-fired gun. Nor is it another take on the 1911. No, the new SA-35 is a 100-percent made-in-the-USA variation of the Browning Hi Power. As far as I’m aware, it is the first such variant of that esteemed 9 mm handgun, ever.

Who Made Who?
While I don’t want to belabor you with the history of a handgun as well-known as the Browning Hi Power, in order to properly digest the impact of the new SA-35, we must discuss that subject a little bit. Design of the Hi Power began as FN attempted to meet a requirement set forth by the French military in the early 1920s for a handgun that ultimately would have to be chambered for the 9 mm Parabellum cartridge. John Moses Browning, naturally, was the designer the Belgian company turned to, and he developed two prototypes from his home in Utah. Why is that significant? Well, that is pretty much where the Hi Power’s Americanness ends. From that point, Browning’s designs were modified by Dieudonné Saive in Belgium and eventually entered service with that country’s military in 1935 as the Browning P-35, nicknamed Grand Puissance (high power) after the original French requirements. By the way, the French never adopted the pistol.

From there, the Hi Power served in World War II on both sides, as Belgium was quickly overrun by Nazi Germany in 1940, and not wasting a good factory or a good design, the odious apparatus of that regime churned out sidearms for its own use. Hi Powers were also built in Canada for the Allies, and saw widespread use with Commonwealth forces as well as the American OSS. After the war, FN continued to manufacture the handgun in enormous quantities for export, with the Hi Power being adopted as the standard service pistol of somewhere in the neighborhood of 90 countries and umpteen law enforcement agencies. It was, however, never much of a hit in the U.S. Why? Mid-20th century America was not a fan of the 9 mm—this was the era of the .45 ACP and the .44 Mag., and the 9 mm was seen as that effete European caliber for those sissies we had to help win two world wars. While FN continued to make the Hi Power for sale in the U.S. and around the world, mostly in Portugal in recent decades, the company eventually discontinued the pistol in 2018.

That’s hardly a fitting summary of this venerable, important handgun’s history, but it brings us to the present, and Springfield Armory’s SA-35.

Money Talks
So, why would a fairly large gunmaker release a product another fairly large gunmaker had discontinued a mere three years earlier? That’s a good question, and while I couldn’t get anyone to say anything about that subject on the record, I learned enough information to deduce some things. First, new Browning Hi Power sales quantities when FN made the gun were quite low, so naturally the manufacturer would consider jettisoning a product that seemed to be in low demand. But, was demand actually that low? Companies like Nighthawk Custom offered tricked-out Hi Powers (made from FN production models) that sold quite well at prices far exceeding that of a “regular” variant. Also, the collectors’ market held the Hi Power in some esteem, indicating a degree of demand for the platform, particularly as the 9 mm has come to rule the defensive-handgun world of late. Perhaps the lack of sales was due to a lack of marketing behind the venerable old design? Springfield Armory is going to find out.

“Springfield Armory has a strong reputation for offering high-quality versions of classic firearms, combining modern manufacturing techniques with classic designs,” said the company’s Media Relations Manager, Mike Humphries. “This is the case with the M1A as well as the 1911. And with the SA-35, the company is continuing that tradition with another design born from the genius of John Moses Browning, the creator of the 1911. The result is a pistol that offers shooters a modern take on a revered classic, with subtle but significant improvements and enhancements, while still capturing the appeal of the original.”

And it is those enhancements that separate the SA-35 from the many thousands of surplus Hi Powers on the collectors’ market. 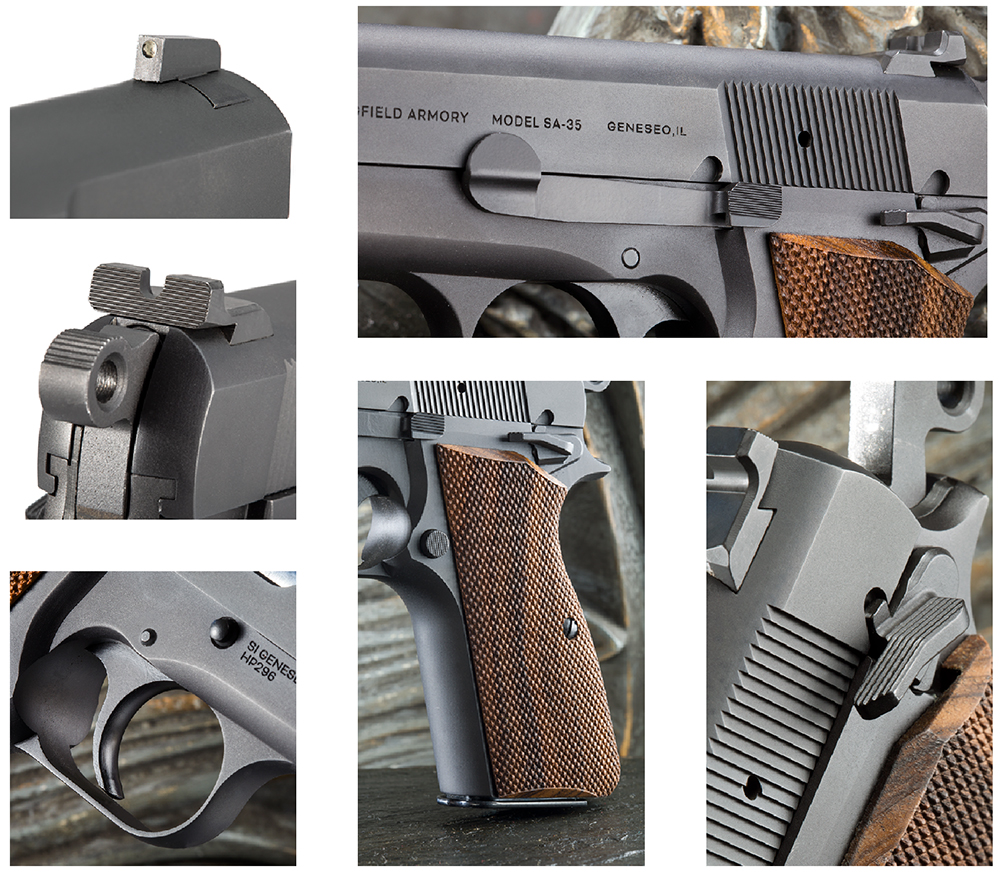 Both the front and rear sights have been updated on the SA-35. They provide a solid sighting system for defensive use • Like the original Hi Power, the SA-35 boasts a long and easy-to-actuate slide-stop lever • Larger than the thumb safety found on its inspiration, the unit on the new Springfield Armory pistol proved simple to use and provides a thumb rest whilst firing • Attractive, checkered walnut grips offer ample purchase • The redesigned trigger is incredibly smooth and broke at less than 5 pounds.

Let There Be Rock
“While the original P-35 is one of the most widely used and highly respected handgun designs of all time, it had certain characteristics that many shooters (particularly today’s shooters) would like to see changed,” said Steve Kramer, Springfield Armory’s vice president of Marketing. “Springfield Armory wanted to take what made the P-35 great, and modernize/refine it further for today’s shooters.”

The SA-35 is an all-steel 9 mm handgun, a rarity in today’s polymer-frame world. That makes it heavier than your standard EDC pistol, no doubt. But, it also makes it very comfortable to shoot, since the extra ounces help absorb recoil. Both frame and slide are machined from forgings, and modern heat-treating processes are used throughout the pistol. Small changes to the feed ramp and extractor geometry are also present, which Springfield says helps the SA-35 function more reliably with modern defensive-handgun ammunition. That claim bore out in my testing.

Checkered walnut grips keep the aesthetic of the Hi Power while also providing solid purchase. The grip is a touch wider than we small-handed folk might like, but not all that much different from a Glock G19 or other double-stack handgun. A single 15-round magazine ships with the SA-35. That’s a two-round increase versus the original Hi Power mag. The company sent me two for testing. Both functioned flawlessly, which shouldn’t be a surprise since, although the magazine is the part around which all handguns are designed, this pistol is using an 86-year-old blueprint and magazines for the Hi Power have been around for a long time. The added two rounds are a most welcome bonus, and clearly do not impact reliability in this area.

Another change to the original Browning-Saive design is a factory-tuned trigger that was incredibly smooth in testing. It exhibited no stacking and broke cleanly at less than 5 pounds of pressure. Improved sights are also present, with a large U-notch, serrated-face rear mated with a white-dot front post. The setup is excellent for close-in work, but might cause some shooters (me) difficulty when aiming for precision hits at distance owing to both the thickness of the post and the width of the notch. Given that this is a handgun designed for defensive use, though, that isn’t a huge problem. Springfield also chose to eliminate the magazine-disconnect, ensuring the SA-35 can fire even if the magazine becomes dislodged and that magazines drop freely when reloading. That change also led to an improved trigger pull.

As mentioned, the pistol is also made in America, with Springfield utilizing its long-held relationships with a variety of domestic vendors to ensure it obtains quality components. Since the Hi Power was never manufactured in any great quantity—if at all—in the U.S., the SA-35 is actually newer than it seems.

Anyone familiar with the Hi Power will be able to field strip the SA-35 for cleaning and maintenance • The hammer has been redesigned to minimize hammer bite, long a concern with the legacy platform • Both the slide and the barrel are made from forged steel, as is the pistol’s frame • Springfield Armory beveled the magazine well to make reloads a bit easier.

Whole Lotta Rosie
The company also touts its redesigned hammer, which has been recontoured to minimize the risk of hammer bite to the shooter’s hand. This is significant, because with a proper, high grip on the pistol, that hazard is quite real.

But does the recontoured hammer fix the problem? Yes and no. In testing, I fired several hundred rounds through the SA-35, and did not get bitten by the hammer as badly as I normally do when shooting Hi Powers, so in that respect, it does indeed work as advertised. However, the webbing between my thumb and index finger did take some abuse, which was likely due to the aesthetically correct, but abruptly short “beavertail.” It was enough that I had lingering—albeit incredibly mild—soreness. While the recontoured hammer is a welcome addition, I think an extended beavertail would be an even better enhancement that would make for more comfortable shooting.

Shoot to Thrill
Sore hand aside, the SA-35 is a joy to shoot whilst shooting it. Low felt recoil, solid accuracy and boring reliability are pretty much all one can ask for in a defensive handgun. It chewed through a variety of commercial offerings of different weights and pressures without a hiccup, although it seemed to prefer the 115-grain stuff above all. That makes sense, since 115-grain ball ammo was likely what the gun was refined to digest throughout its global military service. That said, it functioned flawlessly with both lighter and heavier projectiles, too, and exhibited fairly consistent accuracy regardless of bullet weight or style.

From bench testing to defensive drills, the SA-35 was a welcome change of pace from the tiny, subcompact, polymer-frame 9 mms that seem to be all of the handguns I’ve tested over the past 18 or so months. I came away from the range wanting one of my own.

Thunderstruck
Springfield Armory likely bet right when it decided to resurrect the Hi Power in the SA-35. The modernized features make it wholly useful (not that the original wasn’t) for defensive shooters. While it’s a bit heavy and bulky for most people to carry concealed, it would make an outstanding bedside gun and a fine change for those who carry a steel 1911. With an MSRP of $699, this all-steel gun competes with many polymer-frame, striker-fired offerings that have all the soul of a Soviet apartment block.

While the SA-35 is a departure from today’s norms, it will likely find a home with anyone looking for a handsome, easy-to-shoot, reliable 9 mm handgun that has eight decades of service under its belt, yet boasts modern features designed to enhance the shooter’s experience and the pistol’s utility. In all those areas, it succeeds with aplomb.

I understand Springfield’s reasons for not calling it a Hi Power, since the name may be trademarked and in any case is wholly associated with the “Browning” brand, which is owned by FN. Both are competitors of Springfield Armory, so better to revert to the P-35 name that no one outside of gun collectors knows or cares about rather than potentially give free publicity to another gunmaker. Still, for the rest of us, this is a brand-new Hi Power, and for that, we are thankful.

How to Build a Packable Survival Kit

Where's the Best Place to Keep a Home Defense Firearm?