My pal Mike Buser’s name came across my phone, and I knew he’d have turkeys on his mind. “What’s the schedule looking like? Can you make it out this year?” Mike and I hunt together as often as possible, but my spring schedule can be rather erratic. We’d had some great adventures chasing birds all over the southern half of New York’s Columbia County, but the last one in our mutual hometown of Germantown had resulted in my rolling a tom over, but ultimately losing the bird. Yes, we’d laughed over the errant shot, and there had been some lighthearted ribbing, but it has been tagging me since it happened. “May 1 falls on a Sunday; I’ll be at your house by 5:00 am.” 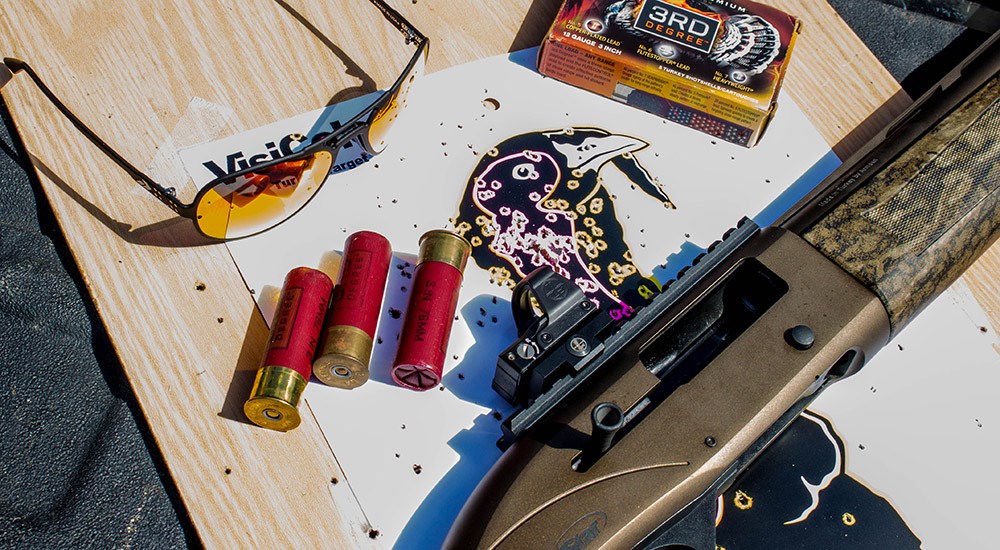 I’d done a review on the Leupold Delta Point Pro red dot, with it mounted on a TriStar Viper G2 Camo shotgun for testing, and asked to hold on the gun for the season opener. This shotgun printed very well on paper, and I was eager to take it in the field. I had a couple of boxes of Federal’s 3rd Degree turkey ammo—in 3-inch magnum, with that excellent blend of No. 5, 6, and 7 shot—and I had the shotgun delivering the goods out to 40 yards. So, with my turkey vest loaded with a few calls, some shells and all the things a turkey hunter needs, I donned my camo and headed out into the frosty darkness to meet Buser.

We’ve had a strange winter, after a devastating bout of EHD which did its damndest to wipe out the whitetail herd, and for whatever reasons our turkey population seems to be considerably low. But we hadn’t gone 200 yards into the white oak hardwoods on the eastern shore of the Hudson River, when the first gobble broke the silence. We quickly set some decoys, Mike started squawking on his aluminum slate call, and it was a matter of moments before three toms were gobbling, hardcore. A pair of toms stood on a ridge to the west, maybe 75 yards away, scanning the situation between gobbles, while the other singular bird came in hard from the north. “A bird in the hand is worth two in the bush,” or in this case, a tom strutting at 40 yards with a smaller beard is redemption for me, where that pair of larger birds, hung up on a ridge, reluctant to cross the small drainage, might never close the gap. I held the red dot on the base of his neck, and got back on the board. One shot from the TriStar Viper had that young tom flopping.

When I had handed Mike that Viper earlier that morning, he immediately commented on how light the shotgun was. According to my scale, the autoloader weighs 7 pounds, 3 ounces unloaded, yet it certainly doesn’t feel that heavy. “Comes up nice though; how is the recoil?” Even from a sitting position, I didn’t have a problem shooting 3-inch magnum shells while sighting in the Leupold red dot, and I certainly didn’t feel any recoil when I dropped that early-morning bird. Being completely honest, the TriStar brand is new to me, and I’m impressed with the performance. 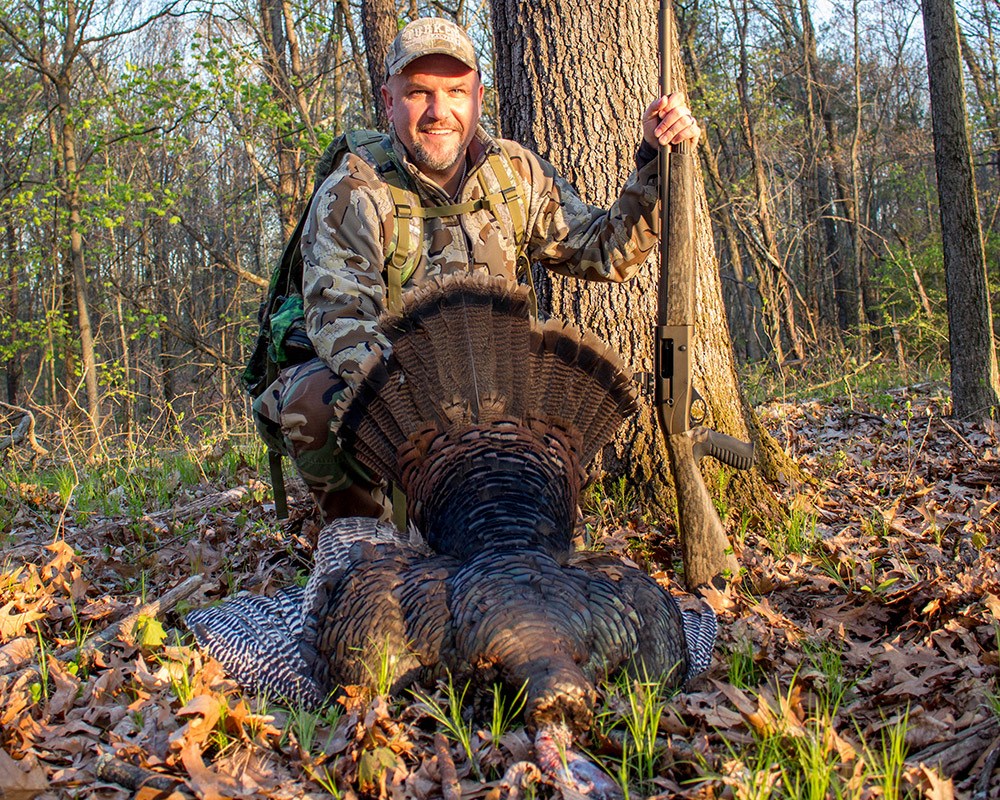 Starting with the obligatory specs, this 3-inch, 12-gauge gas gun has a 24-inch ventilated rib barrel, with screw-in chokes—included were the Improved Cylinder, Modified, Full and the extended Turkey chokes—and tools to change them, culminated in a green fiber-optic bead. An extended pistol grip polymer stock, finished fore and aft with Mossy Oak Bottomland camouflage fit the hands well. Sling swivels are provided at the magazine cap and on the buttstock, making for an easy carry when you’re coming out heavy from the turkey woods. I measured the length of pull at 13¾ inches, and the Soft Touch rubberized pistol grip and pliable rubber butt pad gives a good grip for both trigger hand and shoulder alike. A Picatinny rail can be mounted on the drilled and tapped receiver, and I used that to attach the Delta Point Pro sight. 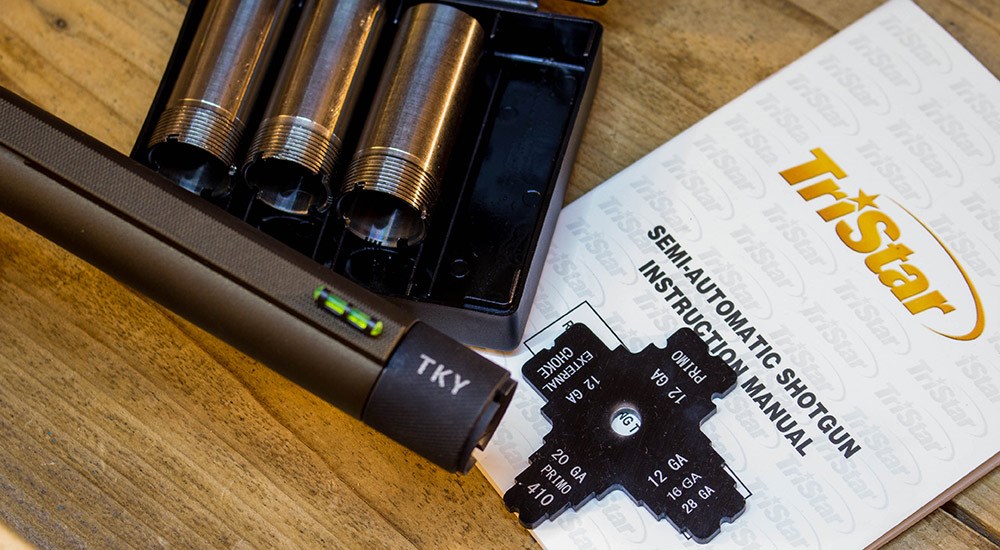 A safety button is located at the rear of the trigger guard, and pushing the button from right to left shows red on the left side of the guard, and takes the shotgun off safe. The bolt release button is located on the right side of the receiver, just below the ejection port, the last shot sees the bolt held rearward. Shells are loaded into the tubular magazine from underneath the receiver, the tube will hold four 3-inch shells, or five 2¾-inch shells. All metalwork is coated in a bronze Cerakote finish, making for a handsome look, impervious to the elements.

Assembling the shotgun took a bit of finagling, as the bolt needs to be drawn about halfway back to slide the barrel onto the receiver, but once that was figured out it was smooth sailing. It is usually recommended to break in your autoloader with magnum shells, but this gun had no problem with 2¾-inch game loads; everything ejected just fine. With its stock design, the TriStar Viper G2 is a dedicated turkey gun, as I really couldn’t envision swinging on a pheasant with this stock configuration. I mean, it could, in theory, be done, but it’d feel rather awkward. But as a turkey gun—and this could even double as a tool for that which goes bump in the night—the ergonomics of the stock is perfect. The trigger has a bit of creep, and breaks consistently at 5 pounds, 9 ounces, according to my Lyman Electronic Digital Trigger Pull Gauge; while that may seem a bit heavy for one who spends the majority of his or her time with a rifle, it feels absolutely on par with my battered Remington 870 Express or 1100. And I can happily say that it posed no problem whatsoever when it was game time. 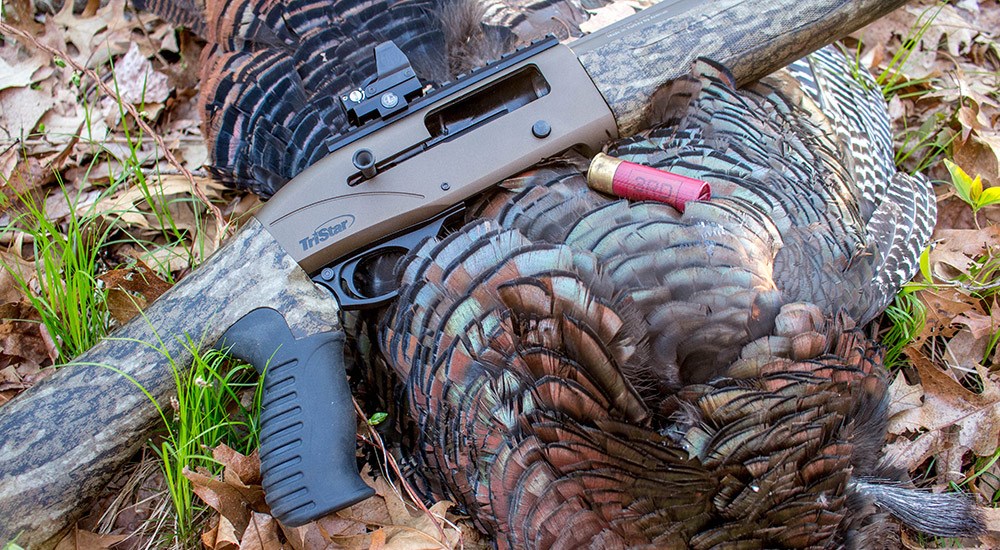 It patterned very well with that Federal 3rd Degree ammo, as well as with some old Federal pheasant and duck loads—so old in fact, that they were lead shot—and cycled everything I fed it, including lighter target loads. With an MSRP of $730, this Turkish-made shotgun offers a good value in a dedicated turkey autoloader. It fits well, carries easy, is wonderfully effective, and topped with that red dot is an amazing piece of gear.