Bill Wilson started Wilson Combat nearly 40 years ago, primarily doing custom work on M1911 handguns for competition shooters. As his name became known and his business became more popular, he started selling his own parts and eventually making complete Wilson Combat M1911 pistols. The company continued to branch out even further, and today is also known for its custom shotguns, AR-pattern rifles, sound suppressors and the EDC X9 line. Also on the handgun side, Wilson Combat had already expanded operations to include parts and modifications for Glock and Beretta pistols, and in 2020, in collaboration with SIG Sauer, the company released a customized version of SIG’s P320 called the WCP320.

For those who may not be familiar, the P320 is the civilian version of the SIG M17/M18 handgun that was recently adopted for use by the U.S. military. The pistol is a striker-fired, polymer-frame semi-automatic. A modular design, the frame’s serialized chassis, containing the slide rails, sear and trigger assembly, can be removed from the polymer grip shell and inserted into a shell of a different size or color. The P320 is offered chambered in 9 mm Luger and .45 ACP, and can be converted to the other cartridge by swapping slides, barrels and magazines. Slides and barrels are available in a variety of lengths, and all these parts can be switched out without the need for tools, so a person can buy one pistol and several conversion kits, and have a handgun capable of everything from concealed carry to competition. 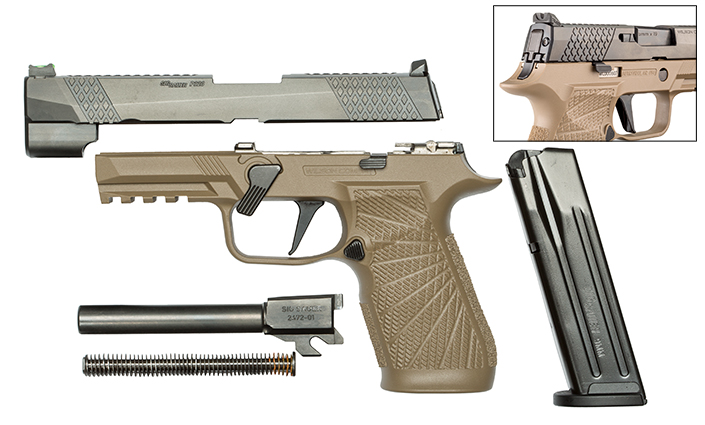 The WCP320’s frame is produced by SIG Sauer to Wilson Combat’s specifications, and while the slides are also sourced from SIG, they are machined and finished by Wilson Combat.

The WCP320 measures 8.25″ long with a 4.7″ barrel and a sight radius of 6.4″. A fullsize pistol with a detachable box magazine capacity of 17 rounds, the WCP320 weighs 29 ozs. empty. Currently, it is available only in 9 mm Luger. It can be ordered with an upgraded Grayguns Competition Trigger (either curved or flat) for an additional $155.

WCP320s are made using frames supplied by SIG that are marked with a “WC” serial number prefix. Slides are also sourced from SIG, but are machined by Wilson Combat and finished in a black diamond-like carbon (DLC) finish. A red fiber-optic front sight is paired with a black, serrated rear sight with a U-shaped notch. The sights on our test pistol were well-regulated from the factory for use at 25 yds.

Taking a closer look at the WCP’s components, we see that the plastic grip module is a new and unique product, and not a SIG grip module that has been re-shaped or re-textured. It is marked with Wilson Combat logos and uses what the company calls Starburst grip texturing. This texturing is a series of raised points offset by deep grooves that radiate away from the rear of the grip in a semi-circular pattern. The front and rear areas of the grip are textured with a grained “cat tongue” pattern that provides a nice contrast to the Starburst design. The slide’s front and rear cocking serrations are patterned in what Wilson Combat calls X-TAC; this is similar in appearance and function to the Starburst grip texturing, and alternates high and low machined areas in a repeating series of “X”s. The machining continues up over the top surfaces of the slide in front and behind the ejection port. 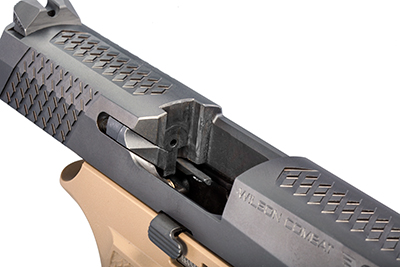 A series of machined diamonds, that Wilson Combat calls its X-TAC pattern, are used as the pistol’s front and rear slide serrations, and the pattern continues atop the gun.

The standard SIG grip module cross section is quite rounded in feel, while the WCP320’s frame has more pronounced corners. The WCP module measures 5.5″ in circumference above the magazine release and behind the trigger, while the standard P320 frame is 5.75″ around. Reach, from the center of the backstrap to the center of the trigger, for the Wilson Combat is 3.125″, compared to 3.375″ on the P320’s regular fullsize module. The shooter’s hand size and personal preference will determine which grip feels the best, but we believe most will find the WCP320’s grip shape to be quite comfortable and natural in the hand.

Controls on the WCP320 consist of a reversible, push-button magazine release button, bilateral slide release levers and a left-side takedown lever. A four-slot accessory rail is molded into the gun’s dustcover for the installation of a light or a laser. Both black and tan grip modules are available, and our test sample came with a tan one with a straight, upgraded Grayguns trigger.

Our test sample’s trigger broke at an average weight of 3 lbs., which is exceptionally light for a striker-fired pistol of this type. It was a bit gritty as initially received, but that mostly worked itself out after a bit of dry-fire practice and a trip to the range. Reliability testing was conducted with a variety of loads, including steel-cased imports from Russia and some older military surplus ammunition from Switzerland; all functioned flawlessly.

Accuracy testing was conducted using two Wilson Combat loads and a Fiocchi jacketed hollow point. The best accuracy was attained using Wilson Combat’s 124-gr. Speer Gold Dot-topped ammunition, which managed a five-group average of 1.93″ at 25 yds. Average extreme spread between the three loads was 2.4″—a fine result for a handgun at this range. The 9 mm Luger cartridge isn’t known for producing punishing recoil, but hotter defensive loads can typically become fatiguing with extended use, however, the fullsize WCP320 was pleasant to shoot even during the extensive use of +P-rated loads. 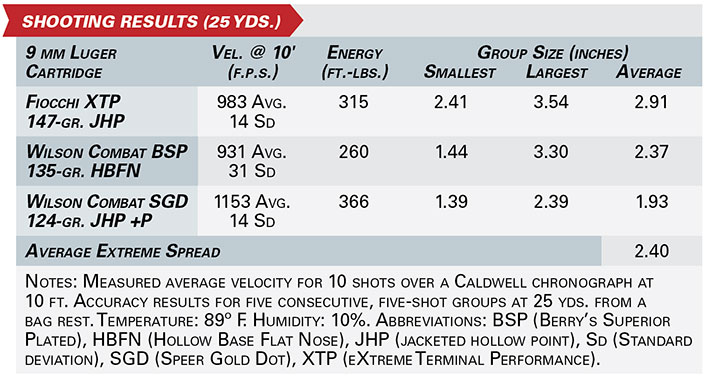 With a base price of $1,195, the Wilson Combat WCP320 is expensive, but it’s an accurate and reliable pistol that’s ready for service right out of the box. The alterations made to SIG’s P320 are thoughtful and well-executed, making an already solid platform even better. 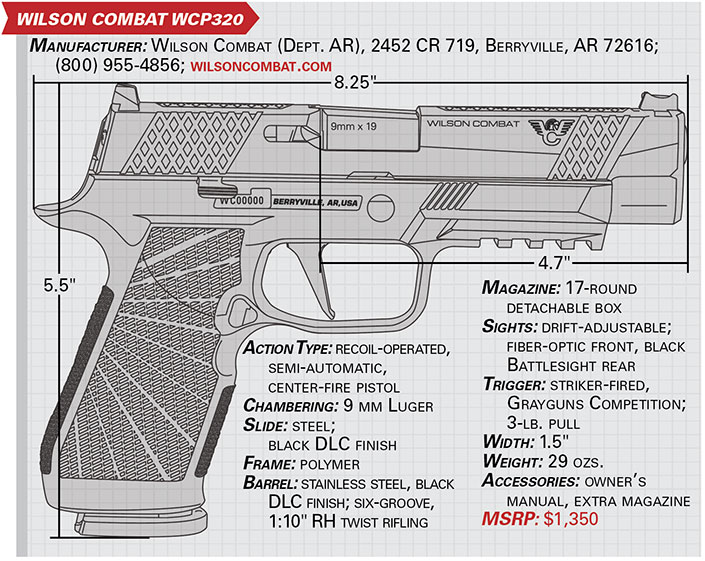 Tennessee Campus Safety Legislation to be Enacted into Law