Some military rifles capture the imagination more than others. For many, the Short, Magazine Lee-Enfield (SMLE) represents a rich period of history that, oftentimes, is chronicled by the many markings left on the guns themselves. The Lee-Enfield platform emerged as the standard British service arm in 1889, at the height of empire, and the battle rifle shepherded soldiers of the Crown into the twilight years of British colonialism.

Because of the Lee-Enfield’s remarkably long service life, it’s not surprising that it showed up throughout British dominion and, later, in British commonwealth countries. Of these many countries, one in particular relied on the Lee-Enfield platform for far longer than many others: India. Magazine Lee-Metfords and Magazine Lee-Enfields saw Indian service first in British hands and later in the hands of Indian soldiers. In the last decades of the 20th century, SMLEs were issued solely for law-enforcement use, a practice that continues today. 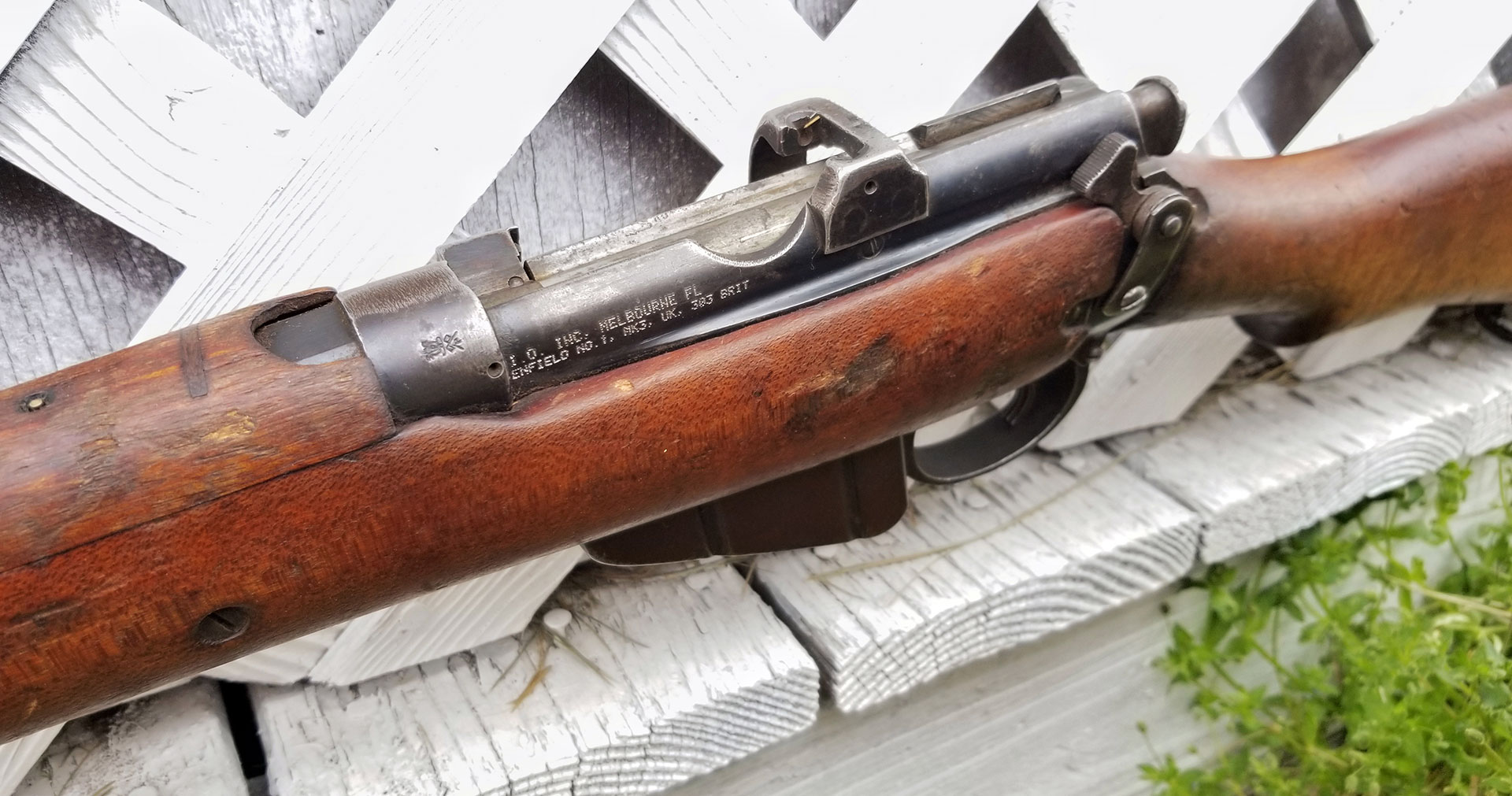 A closer view of the left side of the RTI Ishapore No.1 Mk III, showing a decent amount of remaining finish on the metal, along with the RTI import information etched into the side.

Beyond service, SMLEs were produced domestically within India at the Ishapore Rifle Factory, starting with the facility’s first proofed rifle accepted into service on Sept. 22, 1907. Despite an extraordinary volume of rifles produced, Indian-made and Indian-refurbished SMLEs haven’t received the same respect as their British- or Australian-made counterparts. This despite having been inspected by the British War Office, which determined that the rifles were, “in general appearance, workmanship, finish and handiness, the equal in every way to those patterns manufactured at home.” Thanks to Royal Tiger Imports (RTI), which uncovered a trove of SMLE rifles in Ethiopia, we have a chance to take a closer look at one particular Ishapore-refurbished example, shoot it and uncover its history and the history of those rifles within the Indian subcontinent.

One thing to note is that all the rifles imported by the RTI have been in less-than-stellar storage conditions for many decades, and condition tends to vary widely between individual examples. American Rifleman staffers have observed examples of RTI-imported rifles that run the gamut from shockingly nice to poor, display-only condition. As always, buyers should be aware that there’s a chance they might get a great example or a poor one, and it’s the luck of the draw. It’s also worth noting that there are functionally no other sources of newly discovered surplus rifles, particularly Lee-Enfields. The days of like-new SMLEs are long past, and RTI is one of very few sources of military-surplus rifles that come straight out of government storage. 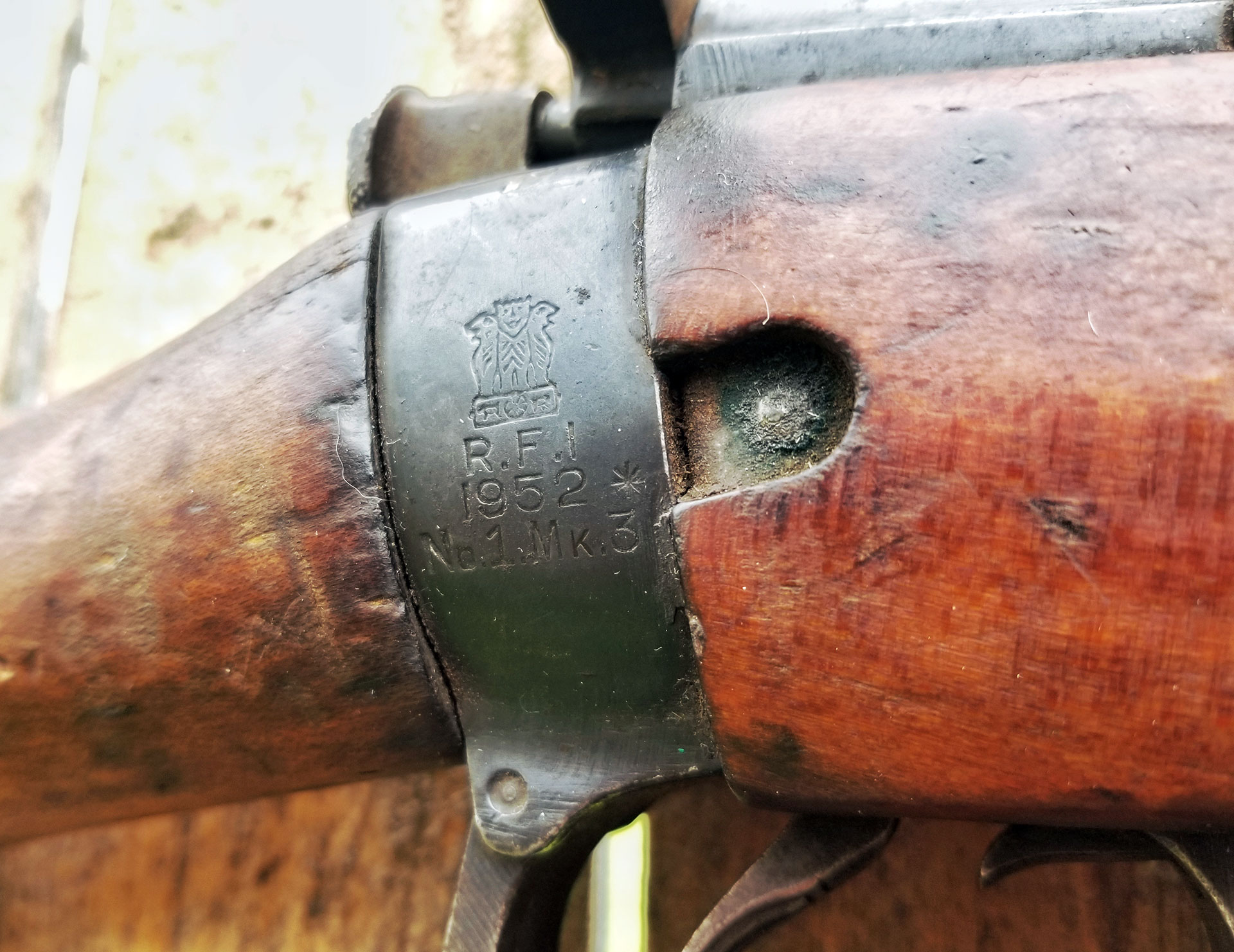 A close up view of the right side of the receiver butt socket, which is marked “R.F.I.,” along with a refurbish date of 1952. The bottom line designates the rifle model, “No. 1, Mk 3”.

The SMLE we received from RTI was in fairly decent condition upon arrival, and it bears the classic hallmarks of a rifle refurbished in the Indian service. The receiver itself was produced at Ishapore, but many of its details have been ground away during later refurbishing work. Instead, there are details describing its history in Indian service. The right side of the butt socket is marked “R.F.I.,” which stands for “Rifle Factory, Ishapore,” and below it is the production date of 1952. The bottom line designates the rifle model, in this case, “No. 1, Mk 3”. 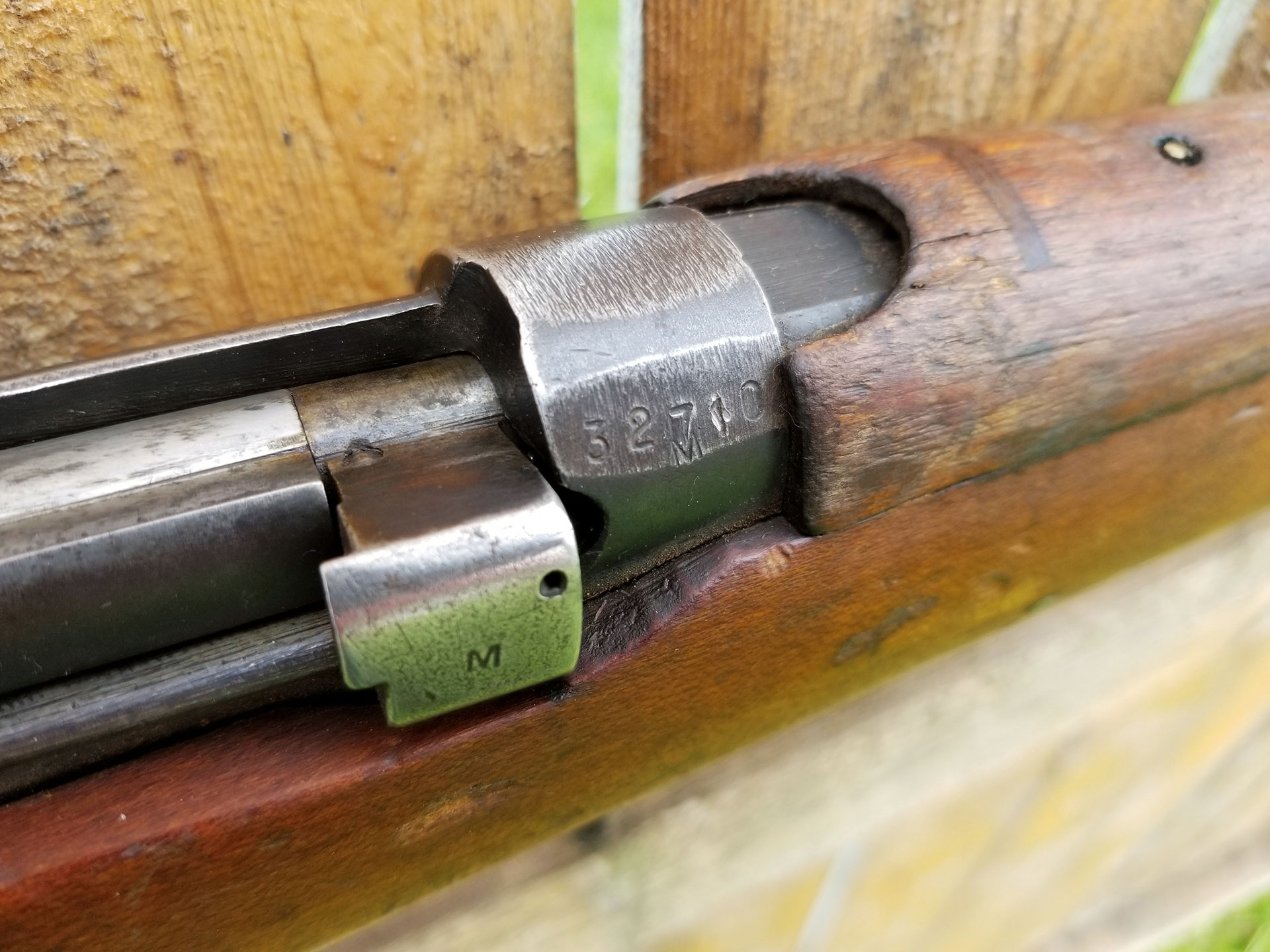 A closer view of the filed-down barrel knox section of the receiver. The original serial number was removed and replaced with another.

As received from RTI, the rifle was in dirty but reasonably fair condition. When receiving a new gun, particularly a military-surplus one with an unknown history, buyers would be wise to carefully examine their example before taking it to the range. Those without the knowledge or tools to perform such examinations ought to consult a gunsmith. For our part, an overview of this No. 1, Mk III showed no clear warning signs. The metal was in good shape and free of any significant rusting or pitting, likely due to the gun’s long-term storage in the dry environment of Africa. Headspace checked out with a set of simple gauges, and the bore was clear of any bulges or obstructions.

One possible issue to be aware of in these guns and other Lee-Enfield rifles is the presence of a mismatched bolt-and-receiver assembly. These parts were serial-numbered for a reason, and while many collectors and shooters have encountered no issues firing mismatched examples, the fact remains that mismatched parts usually means the gun was reassembled by someone with little-to-no armorer-level experience working with Lee-Enfields. As a vestige of Victorian engineering, the No. 1, Mk III required a fair amount of hand-fitting and gunsmithing for safe, effective operation, and this truth carries over to the later-produced and refurbished Indian examples. In-depth resources exist for those looking to check the strength and evenness of their bolt lock-up, but suffice it to say that these are critical elements to be aware of before relying on your rifle for regular range use. 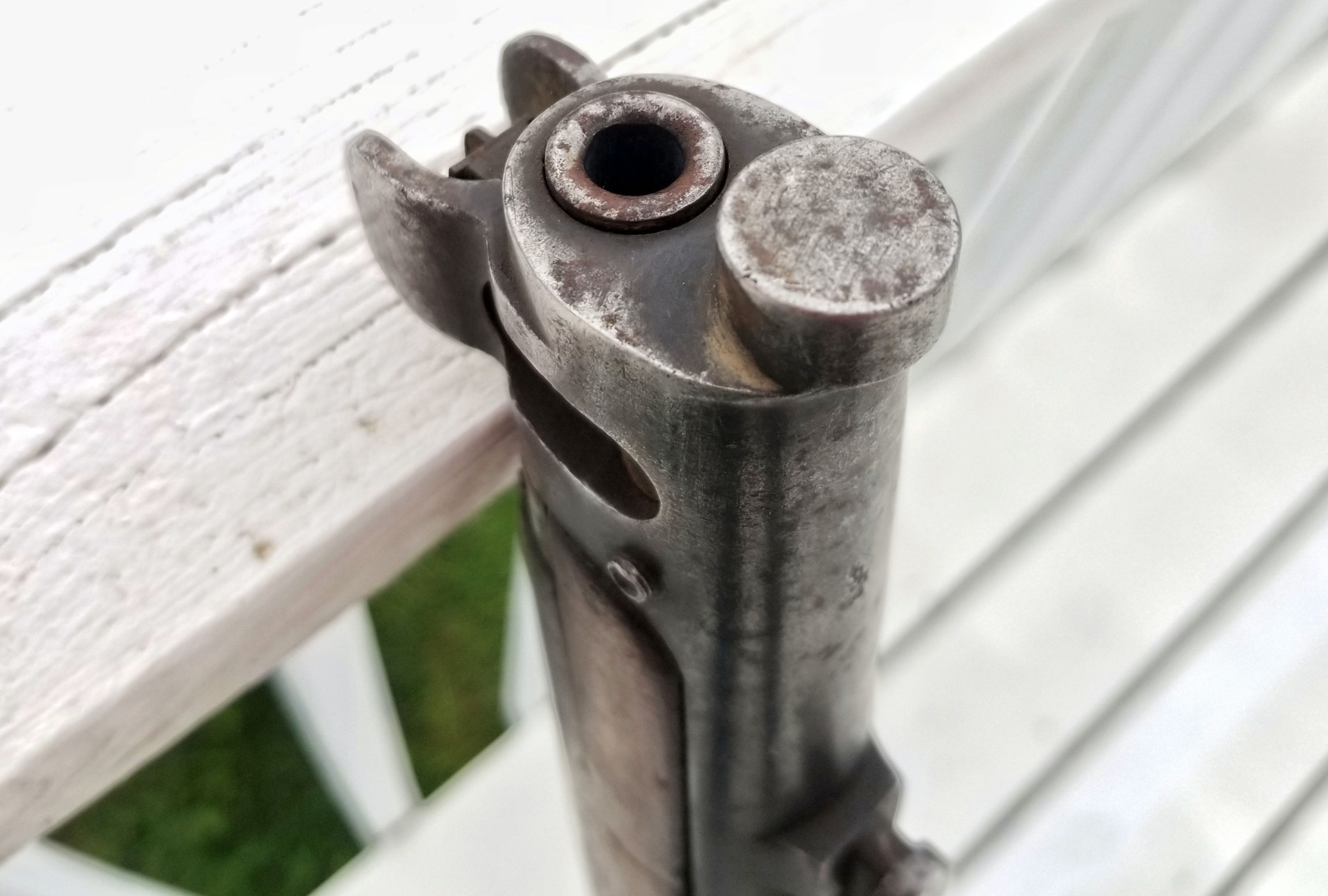 A closer look at the nose cap, which has rounded ears instead of the squared-off style found on typical Ishapore production rifles of the time. The nose cap also lacks a serial number, which indicates that it is most likely a replacement part.

No doubt, a thorough clean of these guns is a must, and for that, there are some great options available for folks looking to remove dirt, dust, grease and grime without damaging any potentially period-correct finishes. My go-to cleaner for antique guns is Ballistol. Those unfamiliar with the product, be warned: it’s got a pungent smell that’ll stick around in your shop. But it cleans everything well, even leather and wood, without damaging finishes. For stubborn grease and preservatives like Cosmoline, a little warmth and patience goes a long way. Baking stocks and actions in sunlight is a help, and as long as you’re gentle and careful, a mild setting on a heat gun can accomplish the same task. Simply allow the grease to liquefy under the heat, and it can be wiped away with a cloth. For metal, brass wool can scrub away stubborn spots without damaging finishes. With old, antique firearms, the keys to careful cleaning are gentle tools and patience.

After a basic cleaning, this No. 1, Mk III was range-ready. With the current ammunition shortage, finding .303 British can be a bit of a chore, but with a little legwork, I’ve found that my preferred load, the 174-grain SP load from PPU, can be had for about $1.50 a round as of this writing. 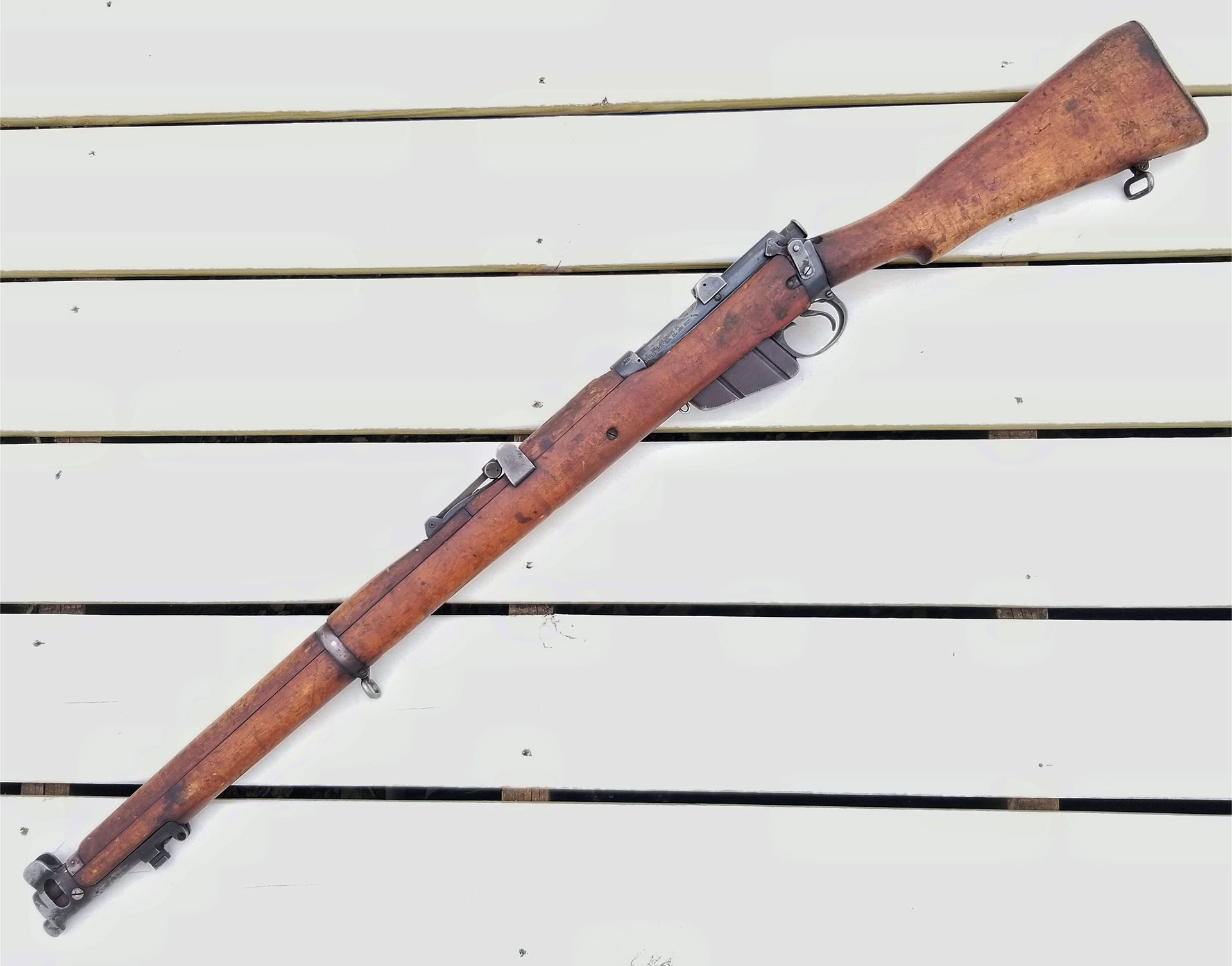 A overall, left-side view of the RTI Ishapore No.1, Mk III.

During several range visits, the rifle performed admirably for an old Enfield. Accuracy wasn’t stellar, but for the few rounds fired, it showed some potential within expected capabilities of these old guns. British military standards for these rifles were right around 4 or 5 m.o.a., and that’s about how this one performed. The bolt was still sticky from years of storage, and if I spent more time with it, I’d perform a deeper cleaning of the bolt mechanism and the inside of the receiver. As it arrived, though, the gun worked as it should.

All the mechanisms functioned as expected, including the safety, and the gun fed, fired and ejected every round without an issue, though ejection seemed to be somewhat anemic. That’s not uncommon for these old guns, though. I did appreciate that the magazine feed lips seemed to be in good shape, as I’ve shot and owned several that needed some work before they could function reliably. Windage was a few inches to the right, but elevation was right on at 100 yards. Even after the better part of a century in less-than-ideal storage conditions, this old SMLE is still capable of putting rounds where needed downrange. 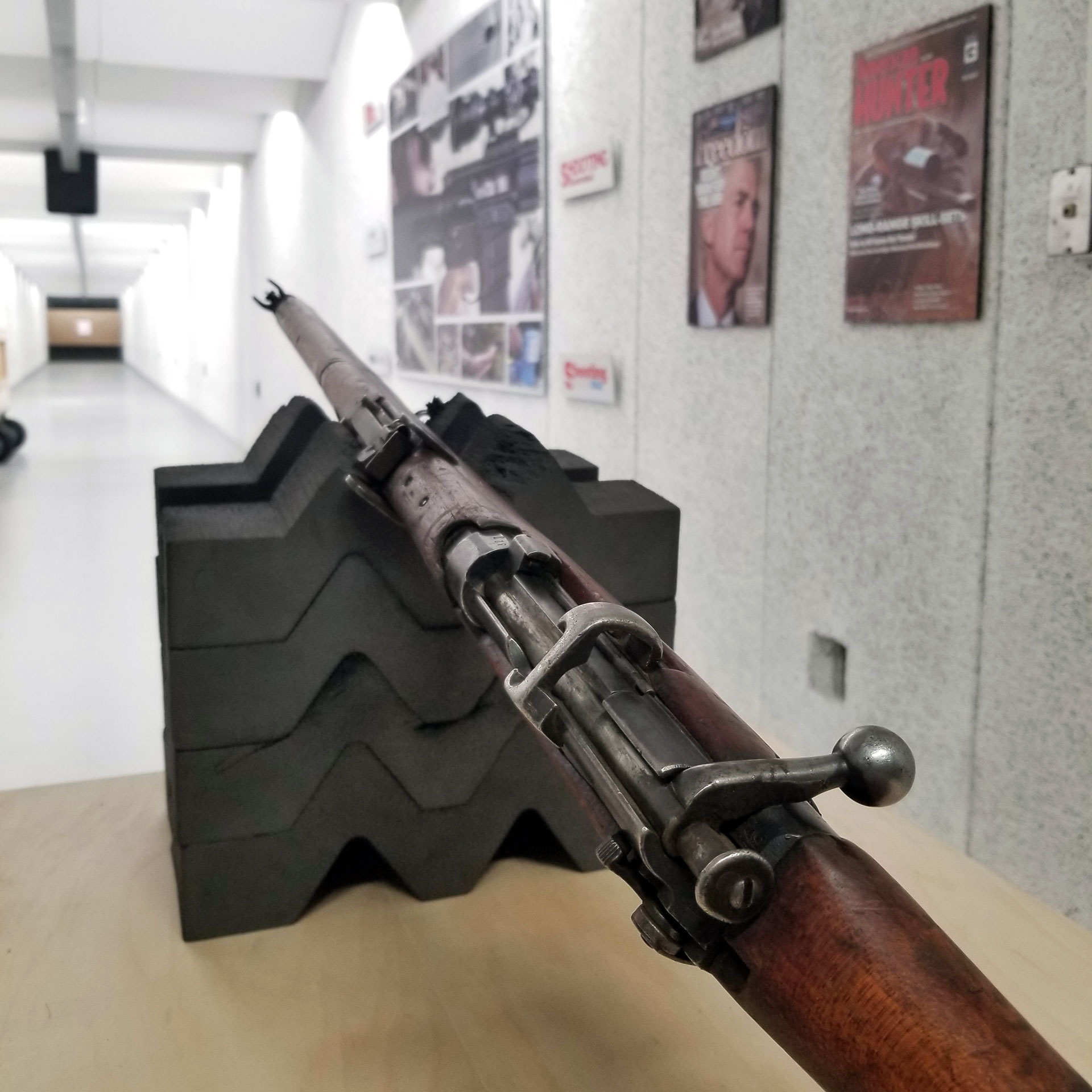 On the range testing out the Ishapore No.1, Mk III.

The military-surplus collecting world is certainly not for the faint of heart. Those on the hunt for a range-ready rifle straight from the box with an accuracy guarantee, perfect wood and blemish-free metal would certainly be better of sticking with factory-new guns, of which there are plenty. These days, it’s rare to find anything even approaching factory-new and trouble-free in the collecting world, and when you do find such an example, be prepared to pay dearly. But from where I stand, those blemish-free firearms are among the least-interesting guns available.

They say you should buy the gun and not the story, and that’s good buying advice, but the fact is that these old guns do have stories to tell. We may not know where it went and who carried it, but it existed in places and times we can only look back on and imagine. They’re true witnesses to history, and many have been pivotal tools during pivotal events. Today, most guns of this type have spent more time in the private collector’s world than they spent in military service. Royal Tiger Imports is one of a scant few companies still offering true military-surplus firearms straight from the countries where they served.