January 31, 2023 Guns In The News
Home»Commentary»Souvenir Self Defense
Commentary

One of the most intriguing stories from the Great War was Medal of Honor winner Alvin York dispatching 5 enemy soldiers who were charging his position. Armed only with a government-issue .45-caliber 1911, Sgt. York displayed great marksmanship and brilliant tactics. Instead of shooting the closest soldier and most imminent threat first, he started with the furthest soldier and worked forward. None of the approaching Germans saw the men behind them fall and continued the attack thinking that Sgt. York was shooting wildly and missing. Had the sergeant started at the front of the formation, the others would have seen his success and taken cover. Now you have a gunfight with 3 or 4 riflemen behind cover against one lone pistolero. Not good!

At a Gunsite Academy writers’ shoot, Training Director Lew Gosnell set up an “Alvin York drill” with 5 steel poppers scattered through the brush. We engaged the targets with .45 caliber pistols starting with the furthest target and working forward. Like the other writers, I cleaned all 5 targets shooting with both hands on the gun, but missed one when shooting just one handed which was the approved technique of the era. In addition, l was shooting my personal 1911 with modern accessories. My interest was piqued; would an unaltered World War I or II vintage pistol be adequate for civilian home and self-defense? 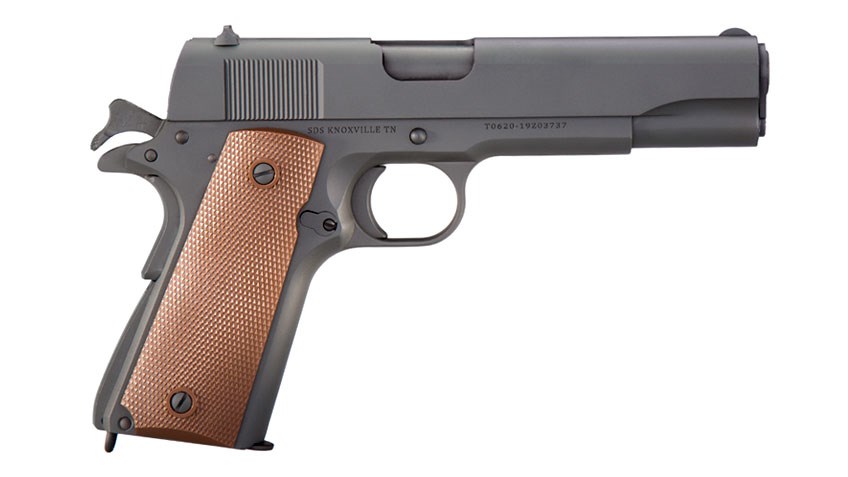 Not having an original WWI or WW2 GI pistol, I obtained a modern replica of a 1911A1 45ACP pistol from SDS Imports and “piggy backed” some standard drills at a Gunsite 250 Defensive Pistol class. Due to the narrow grip safety, the web of my shooting hand was bitten a few times resulting in two cuts. While applying a bandage, Lew Gosnell simply said, “1911s are all about the edges.” When I slide my shooting hand upward into a solid shooting grip like the old bullseye shooters used to do, no problem. Unfortunately, in a defensive confrontation where one is coming from a holster, you don’t have time for that. I suspect it would be even worse drawing from one of the issued GI flap holsters where the gun isn’t exposed enough to get a reasonable shooting grip while still in the leather. I fired over a box of ammo before the cuts became annoying enough to affect my shooting and concentration. Equally inhibiting were the rudimentary sights on the original issue guns. The tiny nubbin of a front blade was difficult to acquire visually against anything except a light-colored target which is not the typical color of uniforms worn in combat or clothing worn by night dwelling evil doers. Despite that, hits were scored during daylight hours on outdoor ranges. Degree of difficulty escalated dramatically when light waned. 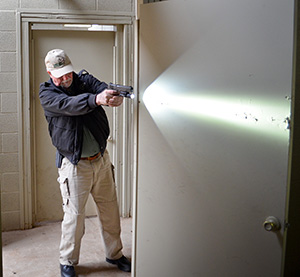 A light on your gun is a great idea in low light situations.

I visited Fink’s Custom Gunsmithing located on the Gunsite grounds and chatted with the owner Dave and his shop manager Cody Clark to see what fixes they might suggest for a souvenir 1911. Unequivocal first recommendation (for any surplus weapon) is a thorough reliability check. A weapon must be safe to fire and run reliably or it’s useless. Cost for the shop check generally runs around $100 depending on what’s needed. Following this, your heirloom retains its original appearance but will perform reliably as a defensive weapon. On a new gun, like my SDS 1911A copy, the shooter can fire a couple hundred rounds to verify reliability. I had not cleaned my 1911A since doing an earlier article on it, and while there were a couple of hiccups locking the magazine in place, there were no failures to cycle and fire. My bad; cleaning the gun solved the magazine issue with both the original mag and some new ones featuring base pads.

Since I’m a bit picky about my hands getting torn up, and where this retro-classic 1911 has no sentimental value, I’d send the gun to Dave and spend an additional $200 getting the gun dehorned. The big steps here include blending the thumb safety along with any other sharp edges plus replacing and fitting a beavertail grip safety. Now your vintage 1911 no longer looks like an authentic issue weapon, but you have a solid defensive pistol that performs like a modern handgun without making you flinch during practice sessions.

If you choose to replace the sights, costs vary depending on what sights you choose, how much machining is required to install them and whether or not the gun needs refinishing. You’d need to talk to your gunsmith about this. If you keep the original sights, a bright flashlight illuminating the target will increase your ability to obtain a decent sight picture. A good flashlight is mandatory for home defense to identify friend from potential assailant and determine if your surprise visitor is indeed a threat, e.g. has a weapon.

I’m not making any recommendations here as to what you should have to defend your home and family. Your degree of preparedness is up to you. I’m just saying that if you’re not a gun person but have a family heirloom that Grandpa carried in one of our frequent international conflicts, you have a serious defensive weapon that has proved itself many times over in the last 111 years. Upgrading the sights and making it more suitable for carrying are a couple of things to consider for improving that vintage 1911 so it can increase your probability of survival.