The collaboration between Springfield Armory and Croatian firearms manufacturer HS Produkt has been a successful one, bringing the XD-series and Hellcat handguns to the American market. But no matter how Springfield innovates in its handgun line-up there’s always been one HS Produkt firearm that has remained elusive to American gun owners — the VHS bullpup rifle. All of that is about to change as Springfield Armory announces the introduction of the Hellion, a semi-automatic, civilian version of the VHS.

Developed to supplant Croatia’s Soviet-era equipment when the country became independent, the VHS was introduced in 2007, updated in 2013 and has seen combat service in Iraq and Afghanistan. While Springfield fans have been clamoring for the company to use its connections to bring the rifle stateside, the process of domesticating the VHS for the American market was several years in the making. 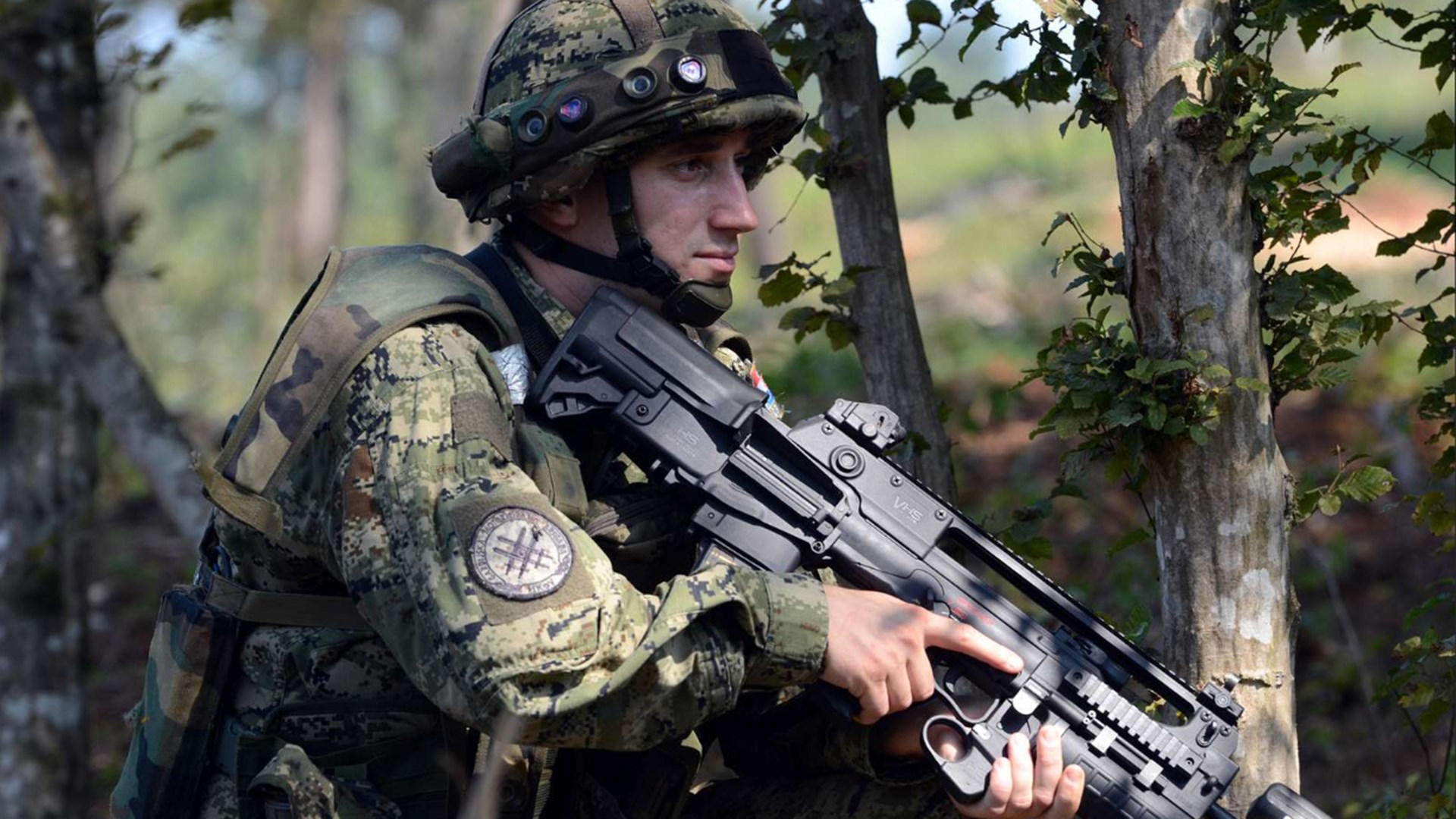 A soldier from the Croatian Armed Forces participates in exercise Immediate Response 16 in 2016, armed with an HS Produkt VHS-2 bullpup rifle equipped with a 40 mm grenade launcher. Image courtesy of the U.S. Army.

“Springfield Armory’s goal is to provide shooters with the best products they can, from classics like the 1911 and the M1A to cutting-edge offerings like the Hellcat and XD-M Elite families,” said Mike Humphries, Springfield Armory’s Media Relations Manager. “The Hellion represents the latest effort on this front, providing American shooters with a unique opportunity to own a civilian-legal, semi-automatic sibling of a proven Croatian military firearm.”

Here’s a rundown on the numbers. The Hellion’s overall length is 28” to 30”, depending on the stock position (see below). Its barrel is 16”, cold hammer-forged and coated in Melonite. The whole package weighs 8 lbs., unloaded, and its MSRP is $1,999. 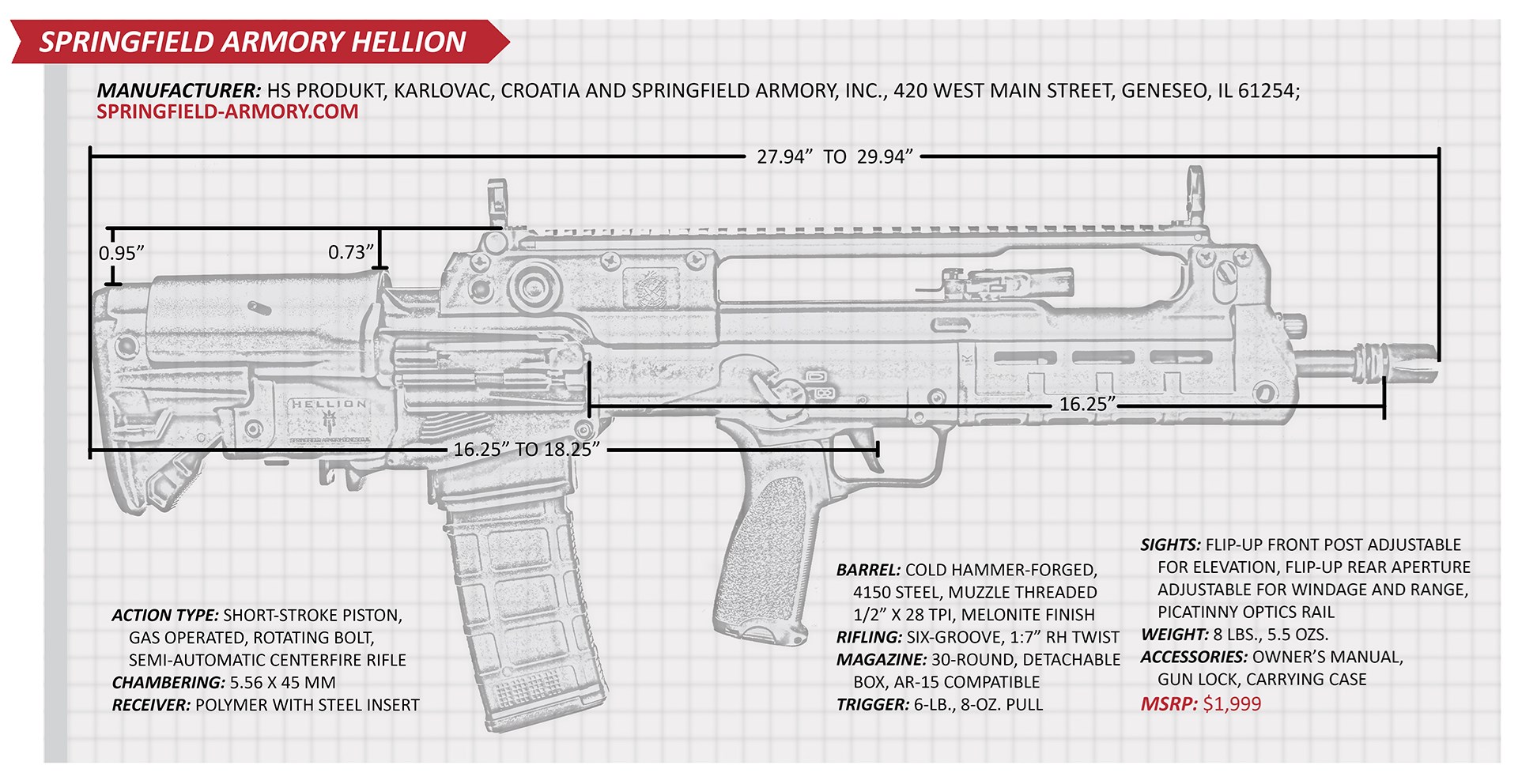 So what makes the civilian Hellion different than the military VHS? First, and most obviously, it is semi-automatic only. Second, it is tailored to the U.S. AR-centric market by being compatible with AR-type grips and magazines. It uses a handguard set up with M-Lok slots, and the rifle has QD sockets for attaching a sling. Beyond that, it’s just like the VHS. The straight-line design uses a raised carrying handle that features a metal M1913 Picatinny optics rail with built-in flip-up iron sights. The major components are made in Croatia and then imported into the U.S. for final assembly with additional American-made parts. 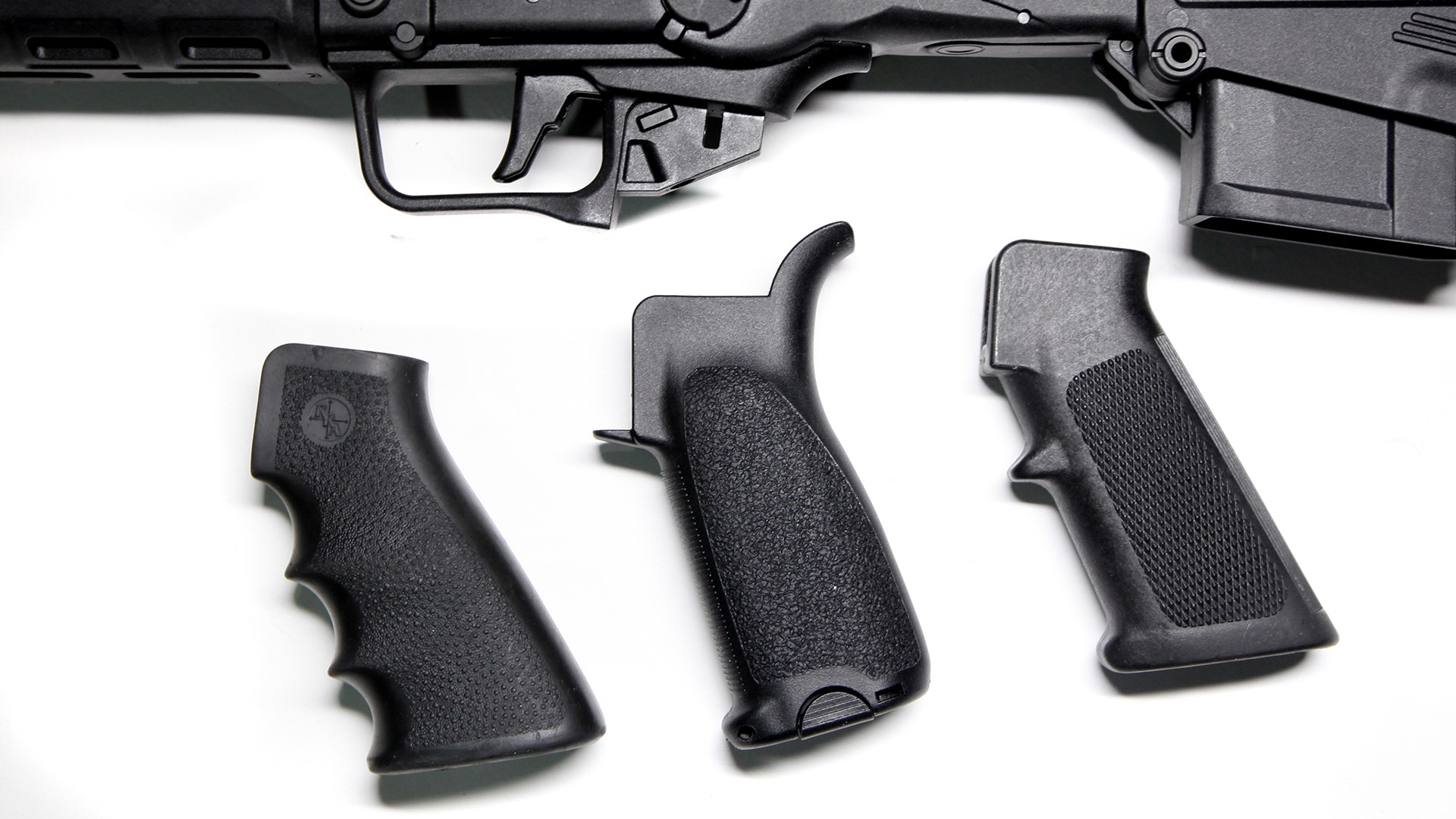 The Hellion is designed to use standard AR-15 grips and comes supplied with a BCMGunfighter Mod 3 (center). 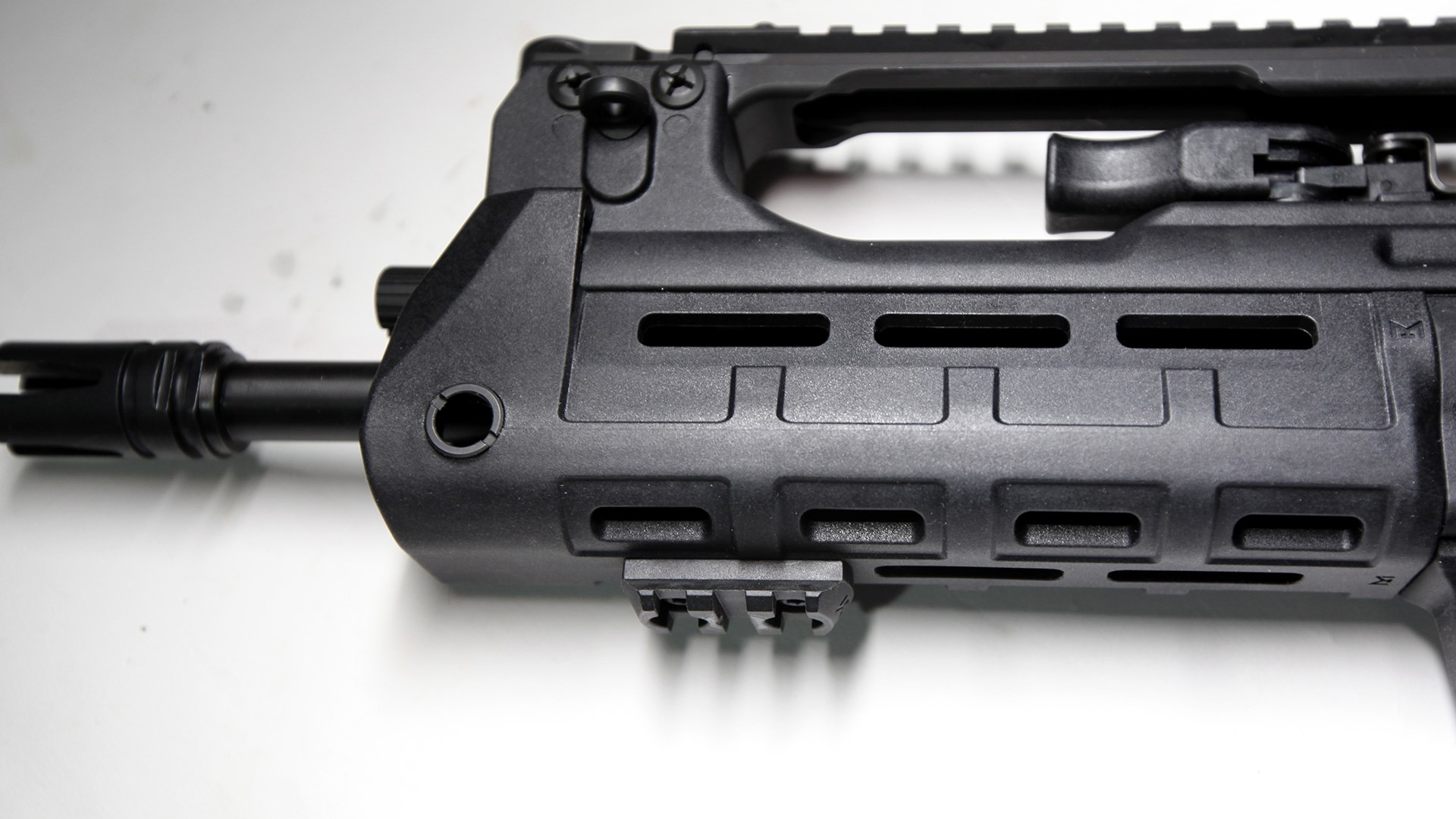 The handguard on the Hellion has three M-Lok slots at the three, six and nine o’clock positions. 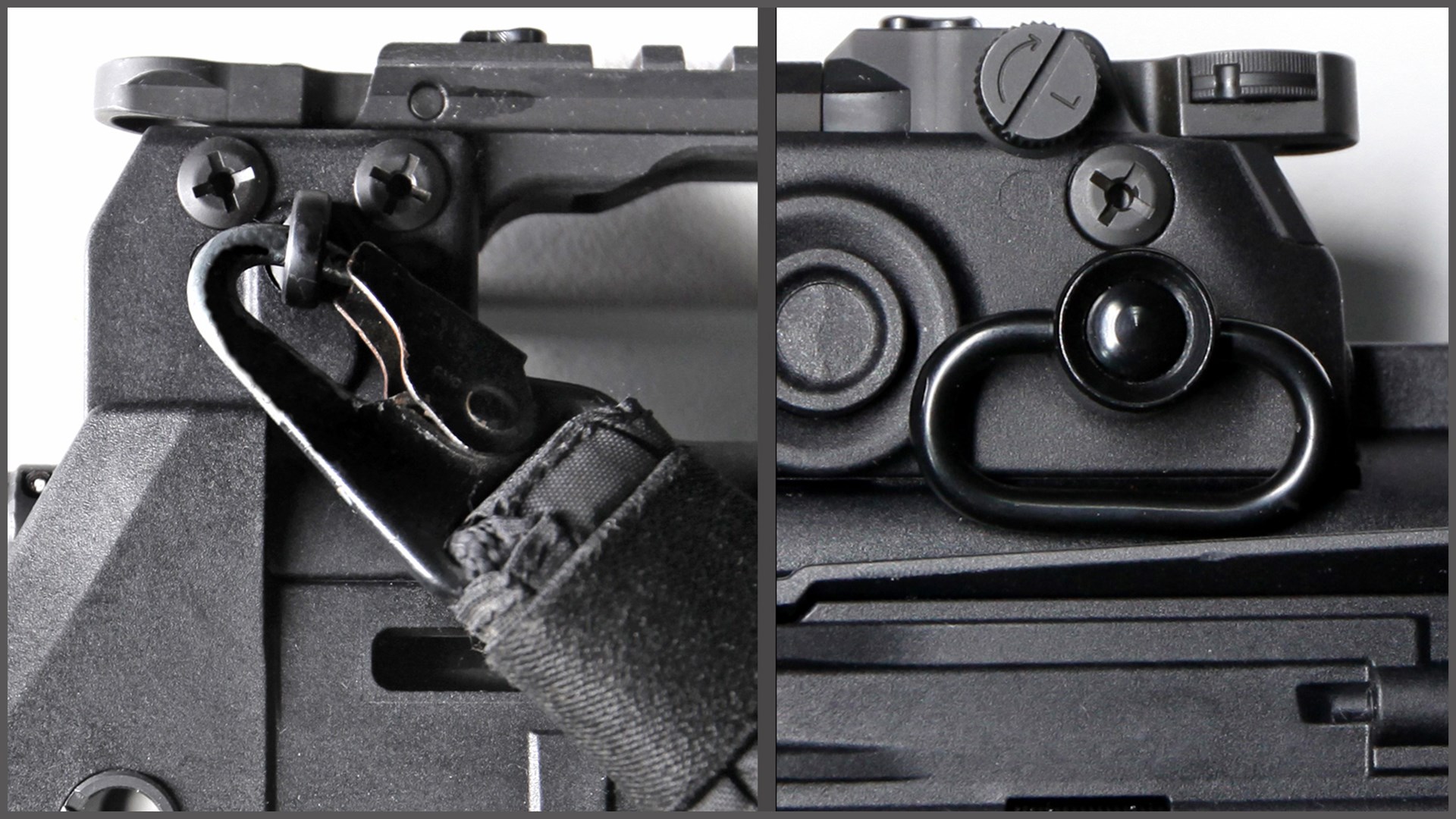 Sling attachment points on the Hellion include QD sockets at the front and back of the rifle, and at the rear of the carrying handle (right), on both sides, as well as eyes for snap hook-type sling attachments (left).

The Hellion has a metal Picatinny rail built into its carrying handle with 13” of space, as well as built-in flip-up iron sights.

One feature that immediately makes the Hellion stand out from the bullpup pack is its adjustable stock. Since bullpups don’t use a conventional stock system, they typically don’t have any adjustability. The Hellion’s buttstock can be locked in five positions over a 2” range to adjust for length-of-pull or to compensate for clothing or equipment being worn. 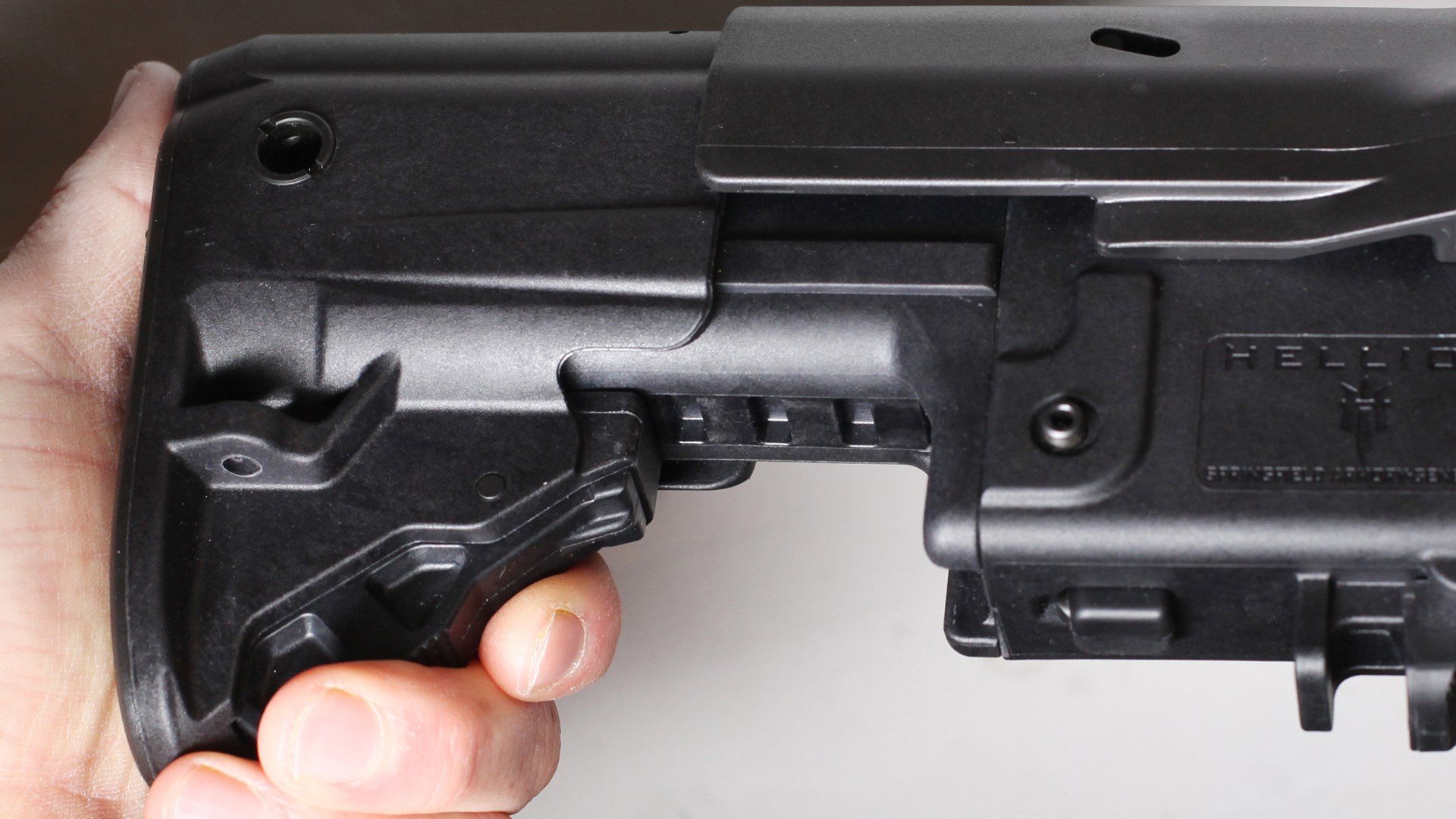 The Hellion’s buttstock uses a M4-style latch that allows for adjustment over five positions.

Underneath its unconventional layout the Hellion’s basic mechanism is entirely conventional — a rotating multi-lug bolt operated by a short-stroke gas piston. An adjustable gas block can be set for normal firing or the use of a suppressor.

The Hellion uses a rotating, multi-lug bolt contained in a square carrier, shown here with the recoil spring assembly that is attached to the buttstock.

A cam surface in the bolt carrier acts on a cam pin that rotates the bolt to lock and unlock its lugs.

The Hellion’s short-stroke gas system acts on an operating rod attached to the bolt carrier.

The Hellion’s adjustable gas block has positions for normal and suppressed firing.

One of the biggest design challenges of a bullpup layout is accommodating both right and left-handed shooters. The Hellion has one of the simplest designs on the market to do this. Pull out the bolt carrier assembly. Remove the cam pin and rotate the bolt 120 degrees. Re-install. Both right and left ejection ports feature swing-down dust covers, so you pin closed the one you’re not using. Your rifle is ready to start spitting empties in the opposite direction. The process is demonstrated in the accompanying video above. 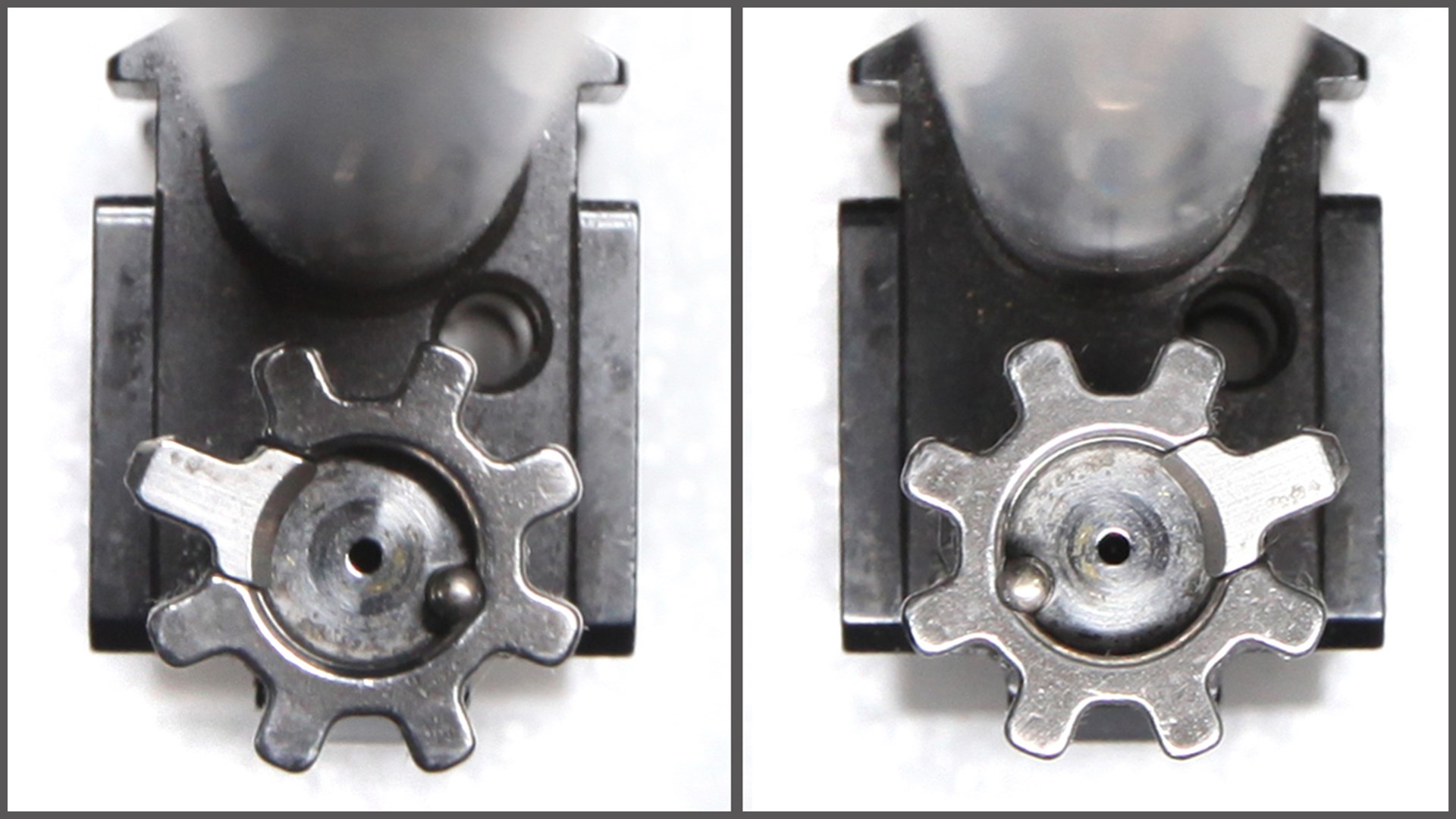 The Hellion’s bolt can be turned 120 degrees to shift from right to left ejection. 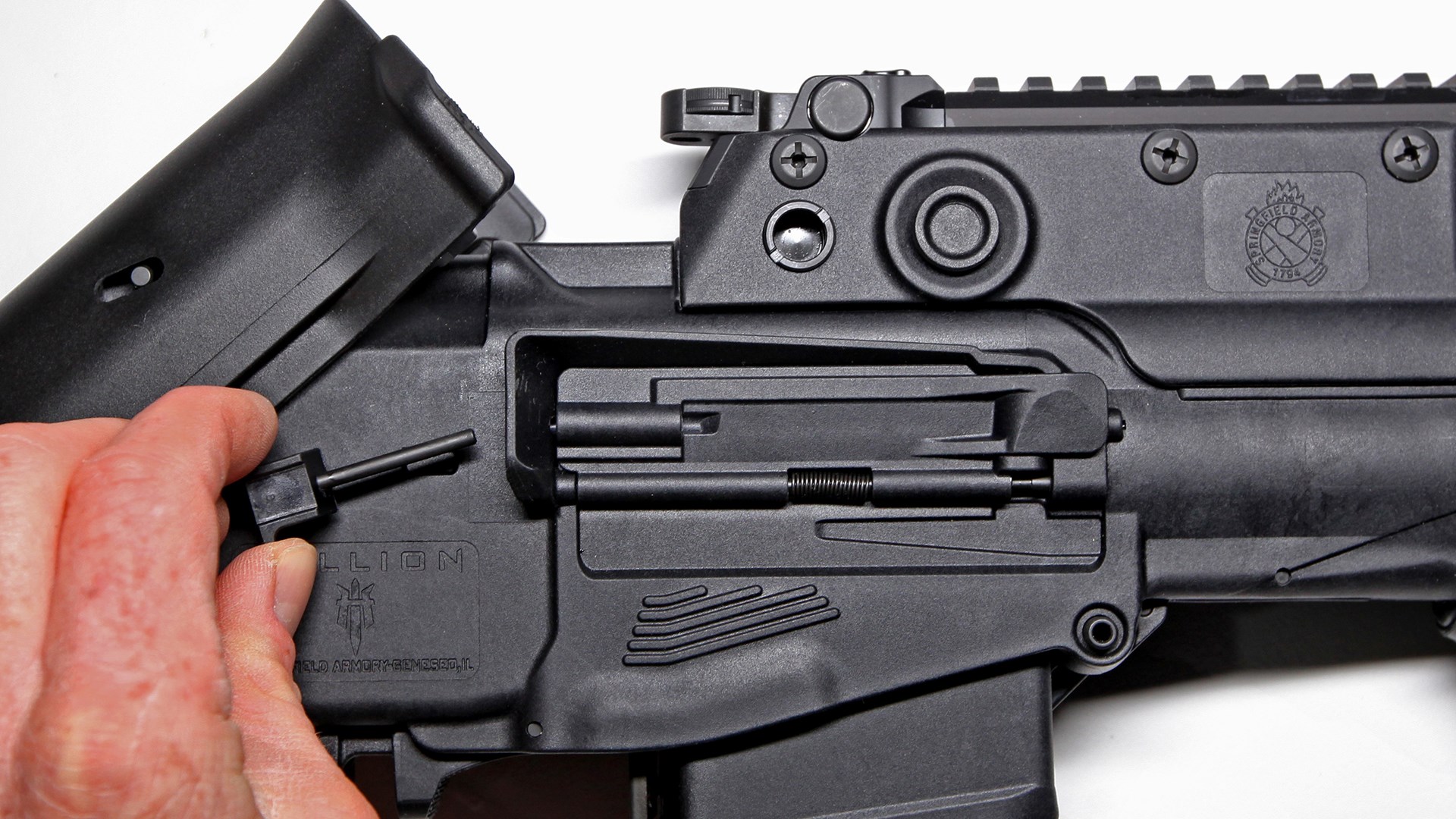 A pin retained by the cheekpiece holds closed the dust cover on the ejection port that is not in use. 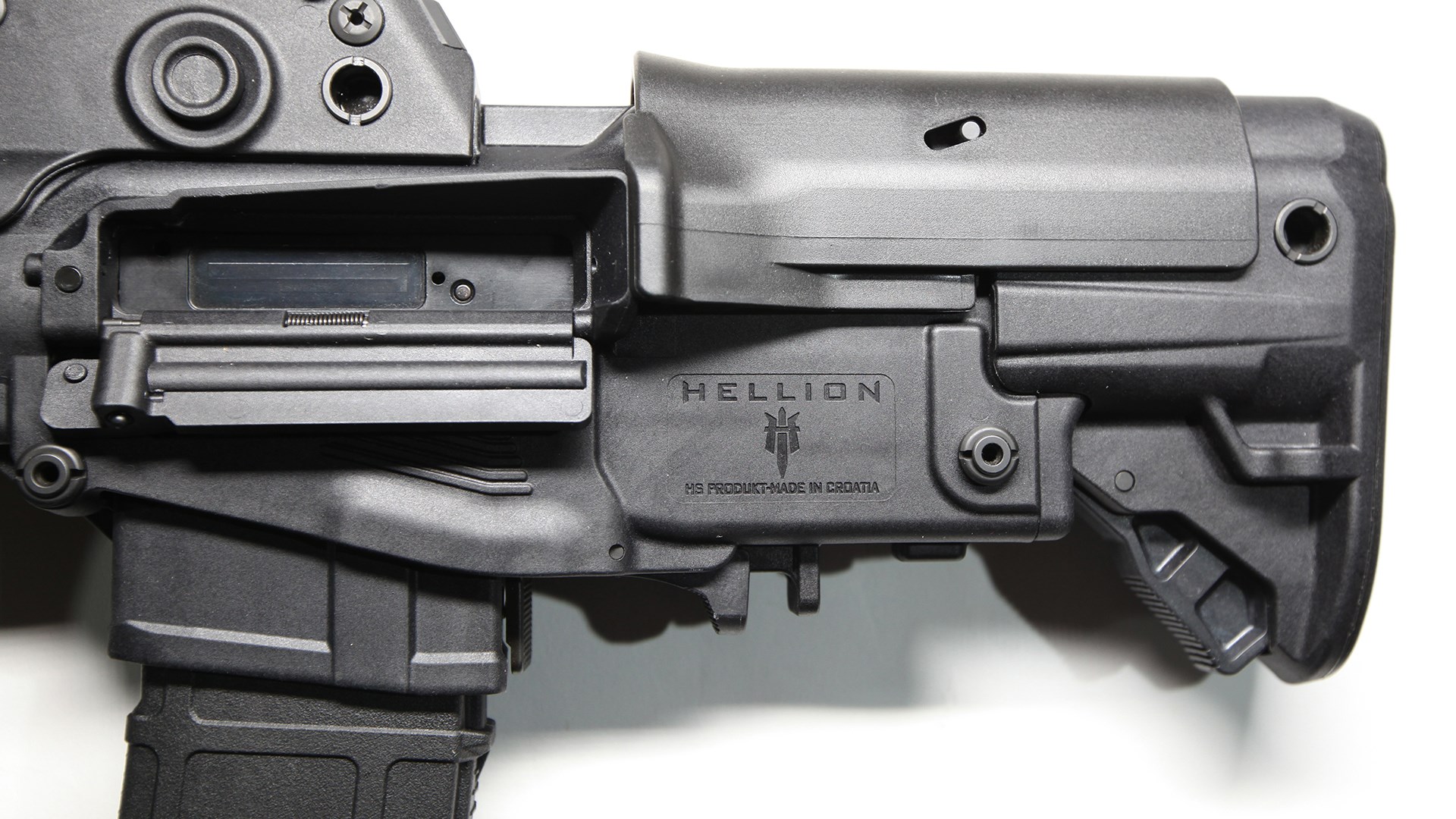 The design of the Hellion allows the user to switch from right to left ejection without the need for special tools or spare parts in about two minutes.

The Hellion design is fully ambidextrous. The charging handle is located under the carrying handle and swings to either side. Though it is non-reciprocating, a small latch behind the charging handle can be pushed down to lock it into the bolt carrier to act as a “forward assist.” The safety selector is placed on both sides above the pistol grip where it is an easy reach for the thumb. Both magazine and bolt releases are bilateral and proximate to the magazine well. 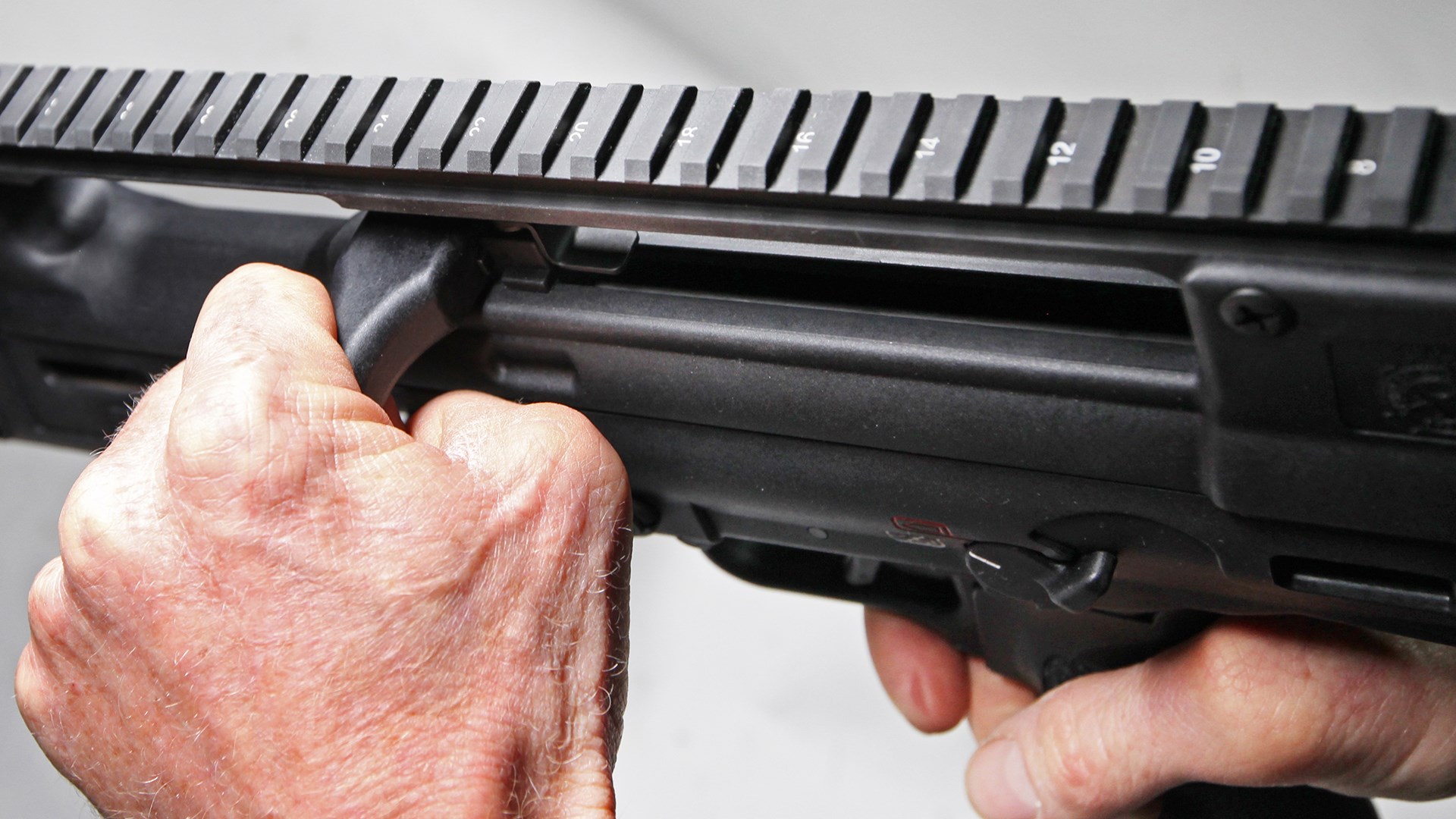 The Hellion charging handle swivels to the right or left for ambidextrous charging. 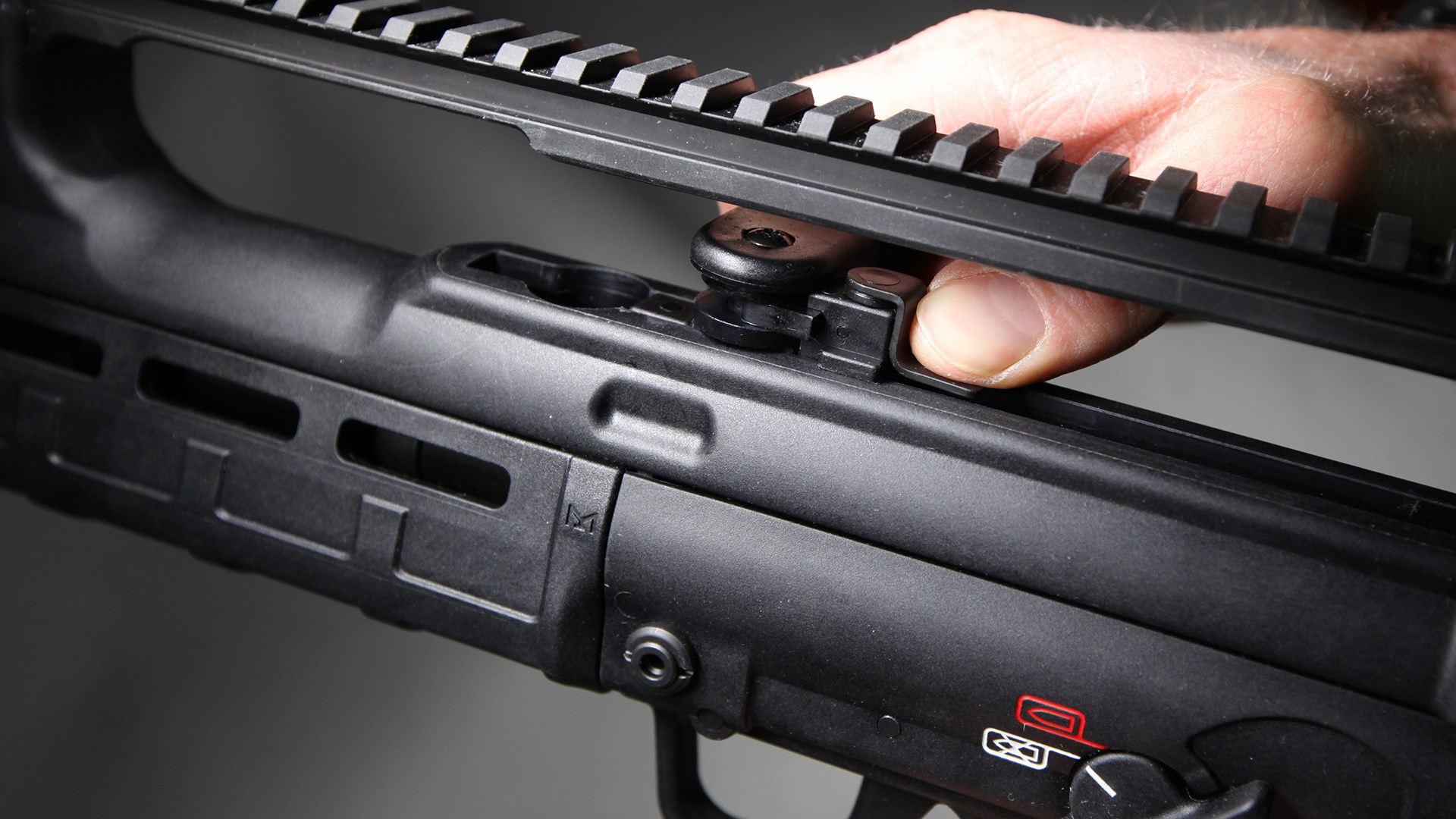 Though the charging handle is non-reciprocating, a latch behind it allows for it to be locked to the operating rod to act as a “forward assist.”

The Hellion’s magazine release is a small paddle located behind the magazine well (right) and the bolt release is a sliding button placed behind it (left). Both controls can be accessed by either hand.

The Hellion can be disassembled by removing a series of push pins. Even the fire-control unit can be removed in one piece for inspection and cleaning.

The Springfield Armory Hellion, shown with the basic field strip that Springfield recommends for routine cleaning. 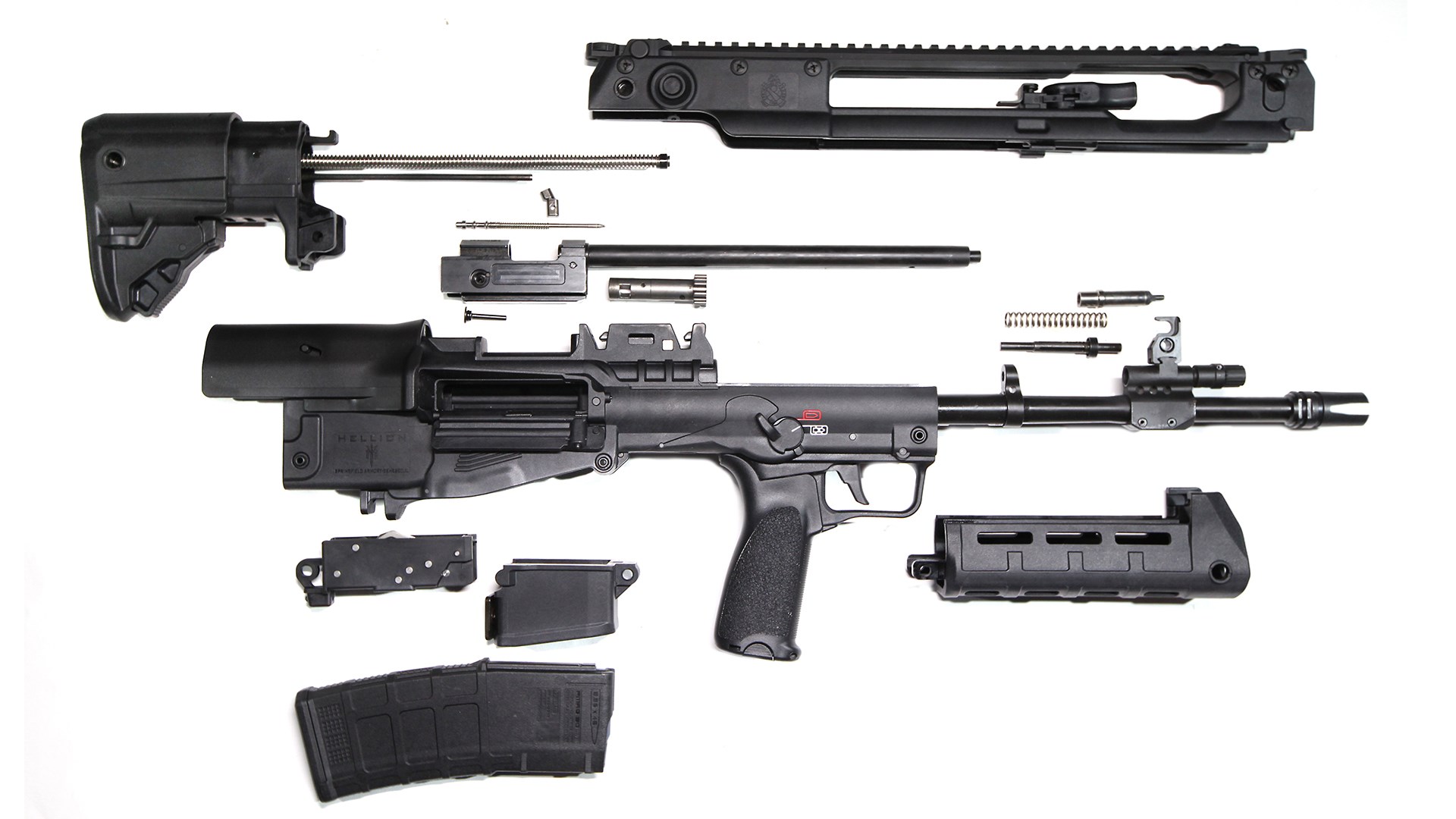 The Springfield Armory Hellion, shown with a complete field strip.

In our testing, the rifle held five-shot groups of around 2” at 100 yards and was 100 percent reliable. Watch for a full review and evaluation of the Springfield Armory Hellion in a future print issue of American Rifleman. 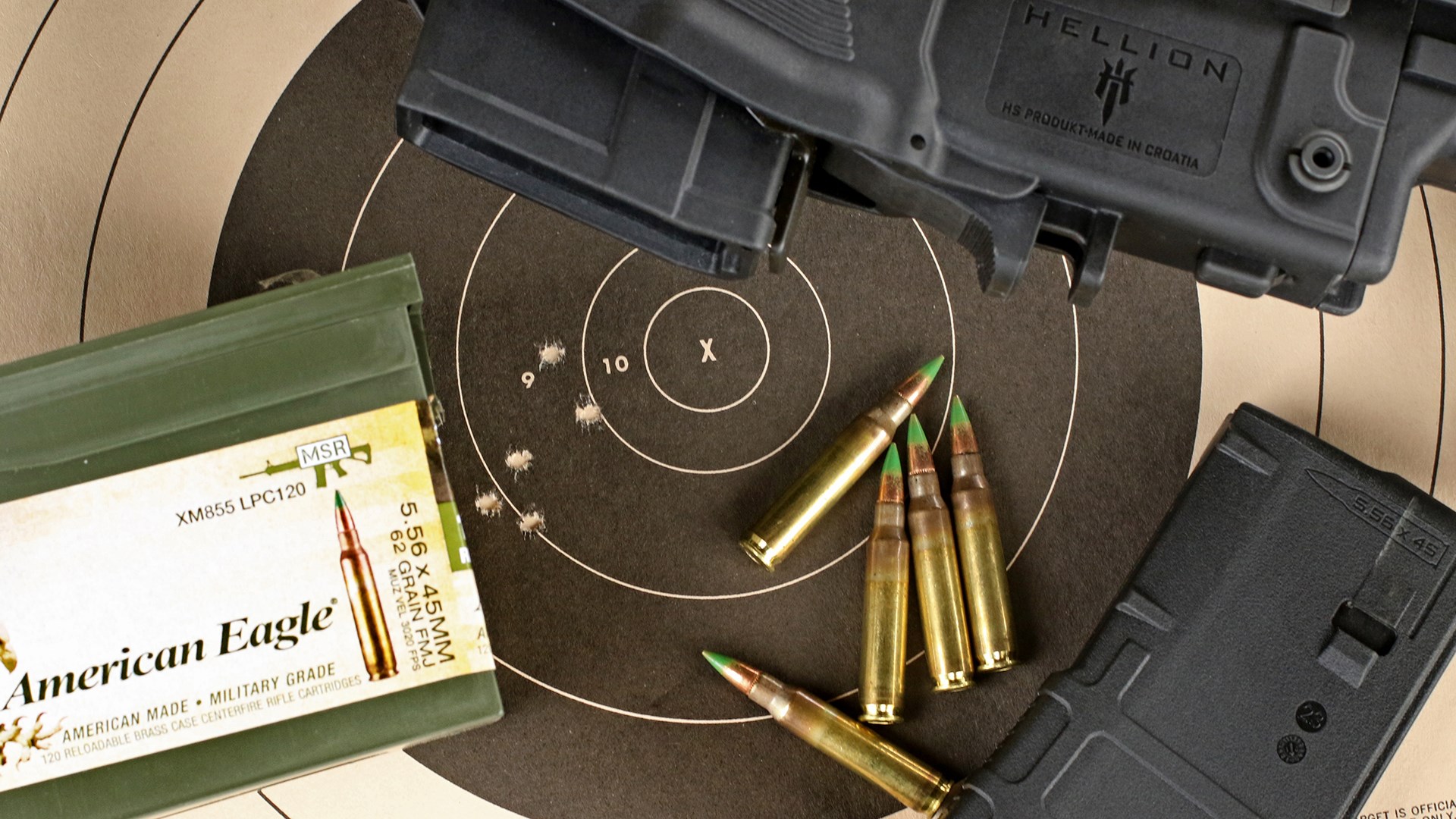 In our testing the Springfield Armory Hellion averaged five-shot groups just under 2” at 100 yards.