The ATF has officially published its pistol-brace executive action that could turn MILLIONS of law-abiding gun owners into FELONS. 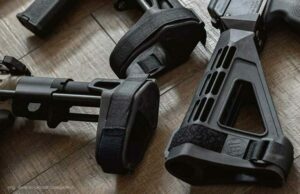 Make no mistake: this is an outright BAN by unelected bureaucrats at the ATF.

Now that the ATF is accepting public comments, we need your help bombarding them with as many letters as possible to STOP this rule before the radical anti-gunner, David Chipman, becomes Director of the ATF.

I want to assure you that your letter to the ATF can make a difference.

Just last December, Gun Owners of America mobilized tens of thousands of patriots like you to BOMBARD the ATF with letters urging them to withdraw their pistol-brace proposal.

Our efforts paid off. The ATF surrendered at the sight of thousands and thousands of furious gun owners in their inbox — and their proposal was withdrawn.

But now that a new anti-gun regime has taken control of America, the ATF feels empowered to revive its war on pistol braces and essentially ban an extremely popular gun accessory.

Gun owners across America must UNITE by the hundreds of thousands to stop the ATF from shredding our God-given rights.

Please submit your comment opposing this unconstitutional change to the ATF using the form above.