First: Everything you’ve heard about Clint Smith… is true. On the range he is a relentless taskmaster and will absolutely let you know when you make a mistake. And, you will make mistakes. Out of our group of seven shooters, I don’t think any were spared Clint’s… witticisms. There’s an upside to this, though: While he’ll call out mistakes in his colorful way, he’ll also let you know when you did it right.

We reviewed the Leupold Mark 3HD 1.5-4X riflescope with FireDot reticle a while back, but our time with it was limited to the square range and technical drills to make sure everything worked (TL/DR: It did). At Thunder Ranch, we got to spend more time with the Mark 3HD on the rifle range. A lot more time. We started by acquiring a rough zero on each scope at 25 yards which was then refined at 50 yards; eventually we extended the zero out to 100 and then 200 yards. Possibly the single biggest takeaway from my time at Thunder Ranch with the Mark 3HD was just how far out it was capable of making effective shots – hits on a standard torso were achieved out to 500 yards, not coincidentally the last graduated subtension on the second-focal-plane reticle (we had the BDC reticle with the FireDot BDC reticle). 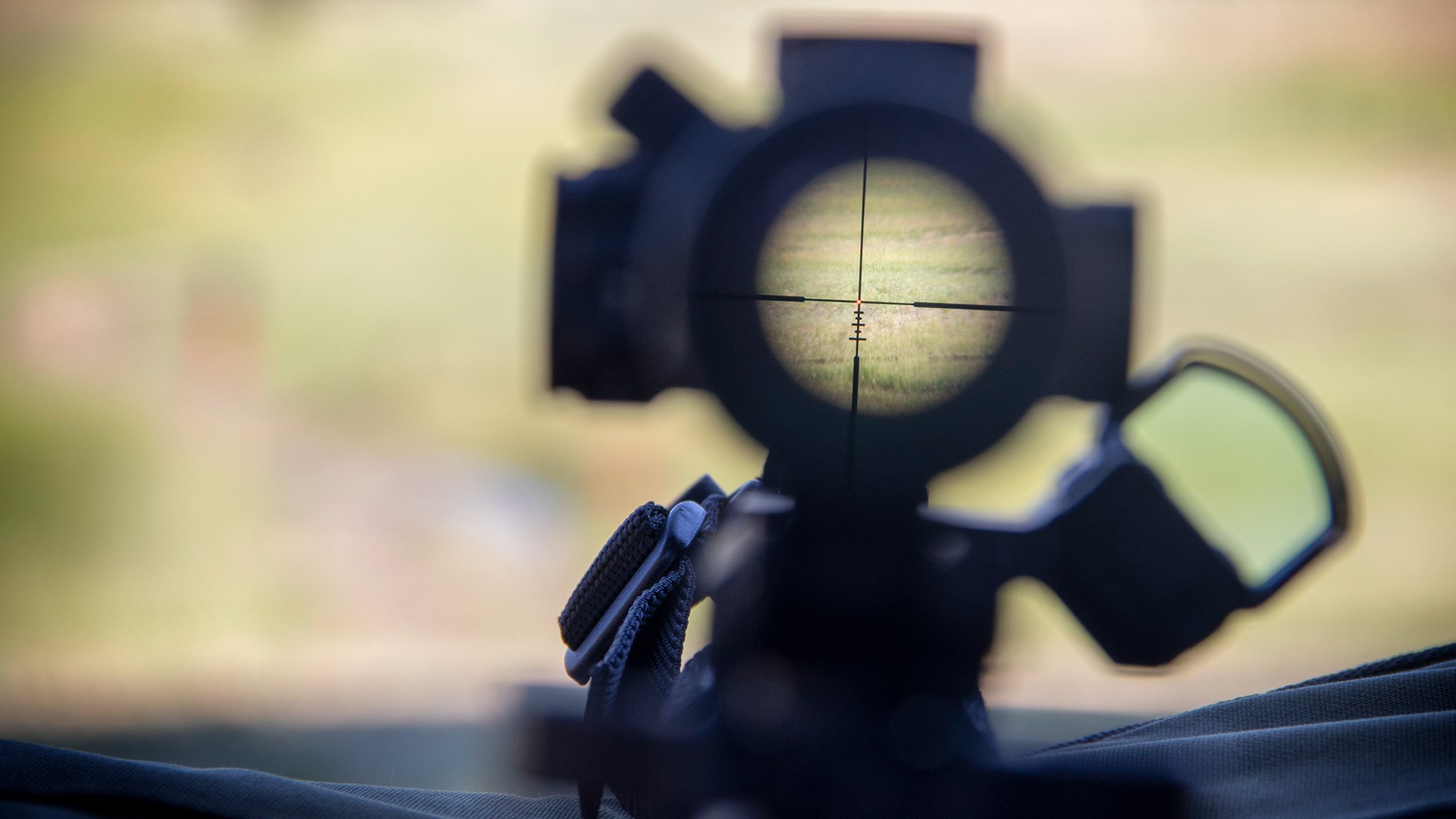 Once we had achieved a rough 50-yard zero, we worked on various failure and malfunction drills: single-hand, support-hand-only, and other potential problems one might encounter. Backing up the Mark 3HD was a 45-degree-offset DeltaPoint Pro red-dot sight, with which we engaged targets both at close range (~10 yards) out to 50 yards. We worked in teams; added in movement, engaged multiple targets at wildly variable distances and generally pushed the scope almost as hard as Clint pushed us. I—and several other of the writers at the event—left a little bit of ourselves on the range in the form of skinned elbows, fingernails and other bits and pieces. It’s a tough course, because life is hard and unpredictable.

My biggest takeaway on the square range was I found I need to revamp both my exercise regime and training. My support-hand shooting is absolutely my weakest point; running the gun with my strong-hand only isn’t much better. I need to shoot from the bench a lot less, and work on prone, kneeling and standing. I need to work on non-traditional shooting positions. I need to get more training. What this event showed me, quite clearly, is that the Leupold Mark 3HD 1.5-4X scope is a heckuva lot more capable than I am…

On our last day of class time, we went to the Brown range for long(er) range work (out to 500 yards; yes, I know that’s not “long” range, but with a 16-inch barrel rifle and a 4X scope it’s pretty far…) We also ran through the simulators to test the Mark 3HD using non-traditional shooting positions and environments. Phone booth (kids, ask your parents); Incline (roof); over obstacles, under obstacles; occluded openings, odd body positions; it’s a great way to get a feel for all the ways things might need to be used. 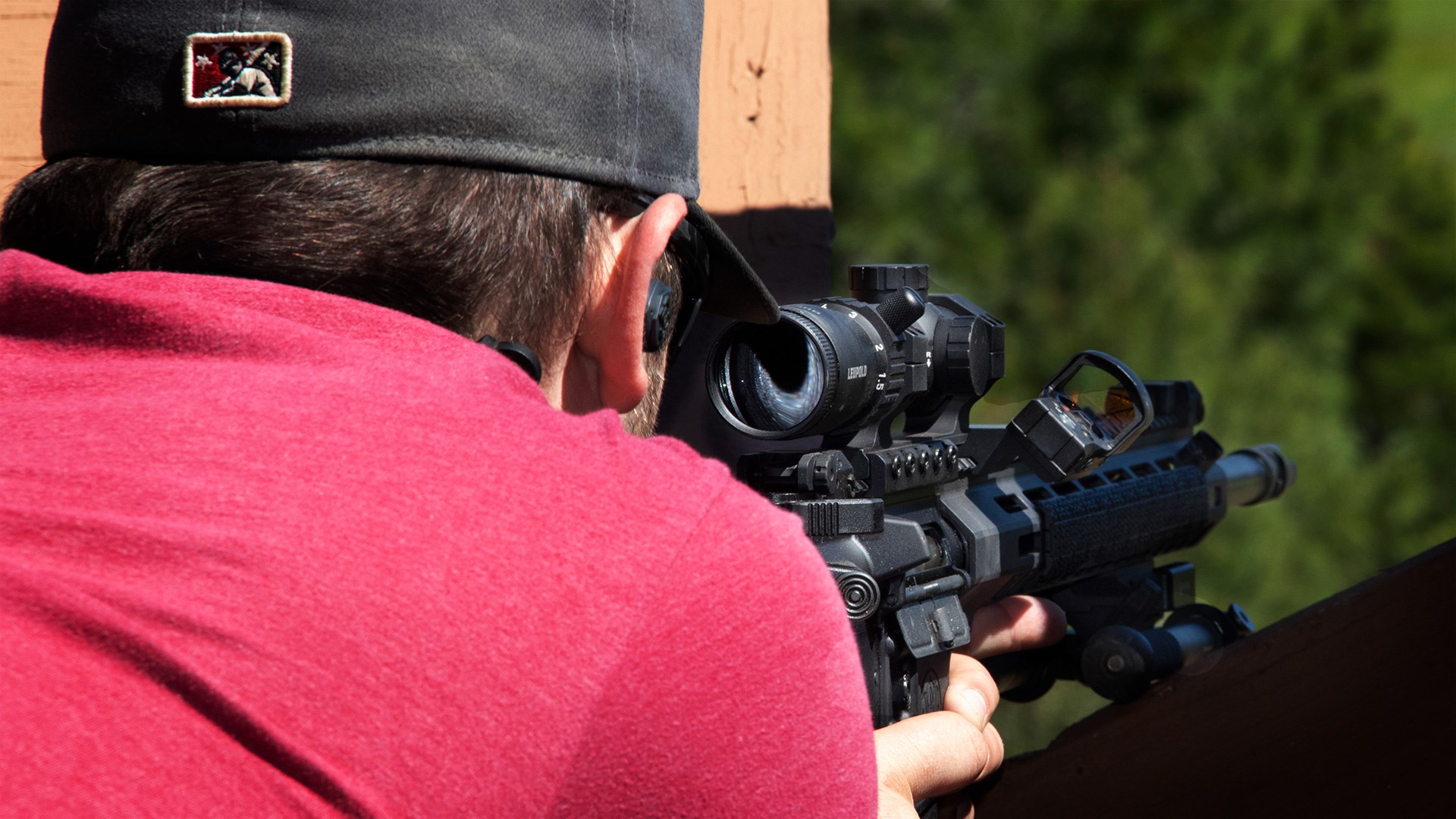 First, though, we confirmed the 100-yard zero for the Mark 3HD on four steel plates, working from large to small. Once everyone could reliably hit the smallest plate, we repeated the exercise at 200 yards, changing our zero to match. Once the 200-yard zero was established and confirmed, we worked on silhouette targets out to 500 yards using the subtensions in the BDC reticle of the Mark 3HD. It’s eye-opening to see both how a 4X scope can make reliable hits that far out, and how easily something as seemingly small as a slight breath can throw off a shot.

Many lessons were learned while using the Leupold Mark 3HD scope at Thunder Ranch. For starters, no matter how much you think you know, you always have a lot to learn. You don’t need a ton of magnification to make hits on silhouette targets even hundreds of yards away—in fact, even non-magnified red dots are quite capable at 100 yards. You will almost certainly not be shooting from a bench; in fact, you might not be able to assume a traditional shooting position at all.  You might need to remove the magazine from your rifle to make a shot, shoot sideways or on your back. The only way to find your limitations is to get out of your comfort zone. Places like Thunder Ranch will help you do that.

Having solid gear, like the Leupold Mark 3HD 1.5-4x riflescope, set up properly and thoroughly tested will highlight all your deficiencies, too, since it’s clearly not the gear that’s causing you to miss shots. The flip side, though, is when everything works right—there’s nothing like the confidence you pick up in your ability when your skills work as well as your gear.

WV: OUR CONSTITUTIONAL RIGHTS ARE NON-NEGOTIABLE