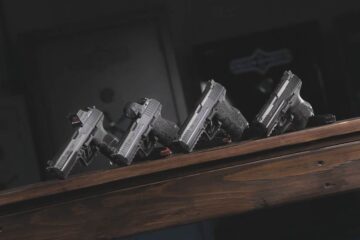 It looks like something a villain in a Bond film

might carry, with its distinctly Eastern European lines and futuristic flair. Its smooth black finish is accented by bright red stocks, and its slide is long and sleek. This isn’t something out of a Hollywood prop house, however, it is the FK Brno Field Pistol—a real handgun that shoots a new cartridge, one whose ballistics blur the lines between what handguns and rifles are capable of. Though exotic in appearance, the Field Pistol is a practical tool that was designed to fill a real-world niche. It is being marketed for sporting use, but its origins stem from wartime necessity.

A private security company operating in the Middle East needed a secondary firearm that could fill the performance gap between its 5.56×45 mm NATO carbines and 9 mm Luger handguns. It needed a handgun that could be used effectively in the 50- to 100-meter engagements that were commonplace in its area of operations, and there was nothing on the market that met its specific needs.

The firm released a set of requirements that the new firearm had to meet the following parameters: a 4″ maximum shot group at 100 meters, a caliber no less than 7.2 mm, a velocity of 1475 f.p.s. at 100 meters and a recoil threshold that did not exceed that of an M1911 chambered in .45 ACP. The intent was that this new cartridge would fit into an available pistol design that would be equipped with a folding stock. In order to meet these requirements, FK Brno put its design team to work, and the 7.5 FK cartridge was born.

The 7.5 FK is a bottleneck design, 35 mm in overall length according to CIP (Europe’s version of SAAMI) specifications. The cartridge could be aptly described as the 7.5×27 mm, as that’s the case length. It is important to note that there is no parent cartridge to the 7.5; it is a case design all of its own. The 95-gr. solid-copper hollow-point bullets clear the muzzle at an advertised 2000 f.p.s., resulting in 844 ft.-lbs. of energy. At 100 meters, the bullet is still traveling at 1525 f.p.s. and producing 491 ft.-lbs. To accomplish this, the 7.5 FK operates at 50,570 p.s.i., which is higher than nearly any handgun cartridge on the market today with the exception of the .454 Casull. This thing is hot.

By the time the cartridge was operational, the private security company was no longer interested since that overseas contract had ended. Still, FK Brno saw promise in the project and adapted it for civilian sporting use. Of all of the design requirements set out by the initial client, the only one that could not be met was that the cartridge could fit into an existing handgun design—the pressure generated by this cartridge is nearly on par with the .223 Rem., and required a firearm designed specifically to accommodate it.

FK Brno calls the Czech Republic home, so perhaps it should come as no surprise that the company chose the CZ 75 design as the father of its new handgun. This nation has a long history of firearm innovation and a thriving shooting community, and the CZ 75 is one of its proudest moments. Often called the “original wonder-nine,” the CZ 75 was one of the first successful double-stack and double-action 9 mm handguns. More than 1 million examples have been produced over the past 43 years, in numerous variants.

One of the CZ 75’s most distinctive design elements, inherited by the FK Field Pistol, is the manner in which the frame and slide interface. Instead of the slide riding on the outside of the frame, it rides on the inside, resulting in a slick profile and a slightly narrower overall width than that of most other semi-automatic pistols. Company designers experimented with numerous locking mechanisms and methods of operation—including roller-locking, gas-operated, delayed-blowback and rotating-barrel designs—before settling on the final version. The FK uses a linkless, tilt-barrel locking mechanism, similar to the FN/Browning High Power and its derivatives, albeit with a twist. The manufacturer claims that the manner in which the barrel unlocks and the slide cycles attenuates the pistol’s muzzle rise by directing the center of mass rearward instead of upward. More on that later.

The quality of construction, along with the fit and finish displayed by this firearm, are far above what the U.S. market has grown accustomed to. Drawing back the slide on this handgun results in a silky smooth sensation; you can feel the precision. The entirety of the handgun, but for components such as springs and stocks, are machined from solid billets of steel alloy; there are no stampings, castings or metal-injection-molded parts in this pistol. The parts are black-nitrided, which is more of a treatment than a finish. Black nitriding hardens the surface of steel significantly and provides excellent protection against both wear and corrosion. The barrel is warrantied for 20,000 rounds and the primary components of the pistol are guaranteed for life.

The FK Field is a single-action and feeds from steel, 15- or 10-round, tapered, detachable box magazines. There is a frame-mounted safety located on the left side of the handgun—upward is the “safe” position.The safety can only be engaged when the hammer is cocked, similar to most single-action handguns. The magazine release is on the left side of the frame, just behind the trigger guard. The trigger, equipped with an overtravel adjustment screw, broke consistently at 3 lbs., 8 ozs., on our test model but exhibited repeatable creep. This was the one disappointing element of an otherwise impressive firearm, particularly one at this price point.

Functionally, the FK Field operates in a manner similar to that of many semi-automatics. The bottleneck cartridges are fed from the detachable box magazine to a ramp integral with the barrel. After firing, the barrel and slide travel rearward together before the barrel is cammed downward at its hood, taking it out of battery and allowing the force of the shot to move the slide fully to the rear. There is no barrel bushing. The slide-mounted extractor and frame-mounted ejector remove the spent case, and the recoil spring and guide rod-mounted counterweight move the slide back into battery.

The frontstrap of the frame is lightly serrated, and a sweeping beavertail protects the shooter from the rounded Commander-style hammer. The stocks on our test gun were made of machined aluminum, anodized to a bright red, which helps give the handgun its distinctive appearance. The slide features angled cocking serrations toward the front and at the rear. Due to the length of the slide, performing a press-check using the forward slide serrations allows for a healthy safety margin behind the muzzle. The FK Field Pistol is designed to accommodate an innovative folding stock, available as an accessory, but attaching one in the United States would require registering the handgun with BATFE as a Short Barreled Rifle.

Three sighting options are available on this handgun: a traditional post and notch, a reflex sight mount for optics such as the Trijicon RMR, and a proprietary Butterfly Sight. Our test model was equipped with the latter, which combines a red front bead with a rear aperture. The rear sight is skeletonized to allow the shooter a maximum view of the target, and its top is shaped in an express-style “V” that can be used as a secondary aiming point for long-range shots. The rear sight is secured via two hex screws and is drift-adjustable. Elevation changes are accomplished using interchangeable front sight blades.

After thoroughly examining the gun, it was time to go to the range. At the time of this writing, the only 7.5 FK ammunition currently available in the United States was the proprietary 95-gr. monolithic copper hollow point. The good news was that the company sent me a full case of it to play with. For starters, let’s talk about recoil. Despite the velocity and operating pressure of the 7.5 FK cartridge, recoil was unexpectedly light. I give some of that credit to the pistol’s overall mass, particularly the weight at the muzzle. What was more interesting, though, was the feel of the recoil impulse: The design of the gun’s proprietary recoil/locking system, which incorporates a cylindrical counterweight, directs the pistol’s recoil straight back, minimizing muzzle rise. It was easy to see how, with the shoulder stock attached, the gun could be an effective fighting tool at intermediate distances.

The sights were properly regulated to the point of aim, and we found them to be very fast to use on practical targets. Accuracy was good, though not exceptional. Five-shot groups of 2″ at 25 yds. is a good benchmark for handgun accuracy, and this handgun shot consistent groups just over that standard. After several trips to the range, I was perplexed: Here was a pistol built to exacting tolerances that showed every sign of being very accurate, yet it was producing only so-so groups. It just didn’t add up. Then it hit me. There’s a reason aperture rear sights are rarely used on a handgun—the aperture is too far from the eye to be an effective optic. Clearly, the Butterfly Sight was engineered with the folding buttstock in mind. A set of traditional sights was included with our test gun and, within minutes, I mounted the two-dot, U-shaped rear sight into the dovetailed slide. Five-shot groups shrunk in half immediately. With the traditional handgun sights installed, the FK Field became a 1″ pistol at 25 yds. At 41, my eyesight is just beginning to change, and I’m confident that, with a reflex sight, I could push those groups even tighter.

The FK met its advertised velocity with an average of 2007 f.p.s. at the muzzle. I actually had to put the LabRadar chronograph into “Rifle” rather than “Handgun” mode in order to achieve an accurate reading. The Field Pistol was 100 percent reliable throughout our testing, never displaying any hint of a hiccup or malfunction. With the bullet cruising downrange at rifle velocity and the long steel slide cycling to the rear, this big, beefy handgun was pure fun to shoot.

Only 1,001 of these firearms are destined for the U.S. market, and they are distributed by FK Brno USA in Gainesville, Fla., which also serves as the U.S. warranty and service center. A drop-in 10 mm Auto conversion barrel is planned and should use the same magazines as the 7.5 FK but with a capacity of 13 rounds. A 5″-barreled polymer version of the 7.5 FK Field Pistol is in development, with a goal of a significantly lower price point than the current model.

For the moment, only the High Terminal Effect 95-gr. copper hollow-point load is available in the United States, but 110-gr. soft-point and 110-gr. JHP loads should be on the market soon.  Both loads will reportedly be less expensive than the High Terminal Effect ammunition, and will be loaded in the U.S. in generous quantities. Loading dies are in development, so, for now, custom dies would be the only immediate source for handloaders.

With a retail price of $7,500, the FK Field Pistol is not a handgun for everyone. Still, its unique and interesting design elements, and ballistic potential, make it unlike most other handguns. It is a head-turner at the range, a performer in the field and a worthwhile addition to any serious handgun collection.

Czech designers pushed the envelope when they developed the venerable CZ 75, and they’ve pushed it even further with the FK Field Pistol, a firearm that muddies the traditional borders between handgun and long arm performance.

5 Reasons To Reconsider The Ruger Mini-14 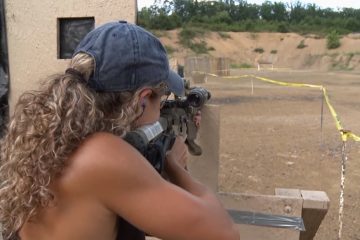