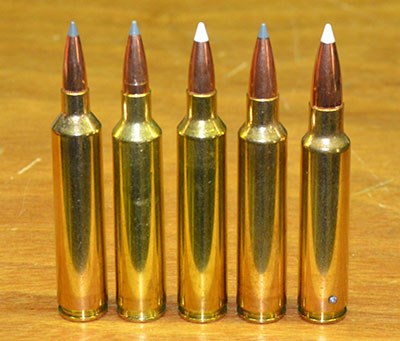 During the design stages of the 27 Nosler and its littermates, cartridge Maximum Overall Length was kept at 3.340″ for compatibility with the .30-’06 Sprg.-length Nosler Model 48 action. Going to .30 cal. and larger required shortening the case slightly and moving the shoulder back in order to have sufficient neck length. Case dimensions were also refined to prevent cross-caliber chambering. It was decided that bullet and cartridge neck diameter alone was not enough to guarantee that someone with arms like Popeye (the Sailor Man) could not force a 28 Nosler cartridge into a rifle chambered for the 27 Nosler. Locating the shoulder datum point of the 28 Nosler case a bit farther forward lessened the odds of that happening. Sound familiar? Then you obviously already know why the shoulder of the .280 Rem. is farther forward than the shoulder of the .270 Win.

Going with a fat parent case made possible the development of cartridges short enough to squeeze into the magazine of the Model 48 rifle while maintaining a large propellant capacity. According to Nosler, with the 150-gr. AccuBond Long Range bullet seated to a cartridge length of 3.340″, the 27 Nosler case has a net water capacity of 91.5 grs. With the same bullet seated in the .270 Wby. Mag., .270 WSM and .270 Winchester, their net capacities are 79.4, 71.8 and 62.8 grs., respectively.

Respective muzzle velocity ratings for Nosler Trophy Grade ammunition loaded with 150-gr. AccuBond and 165-gr. AccuBond LR bullets are 3250 f.p.s. and 3158 f.p.s. The G1 ballistic coefficients (BCs) are 0.500 for the 150-gr. bullet and 0.620 for the 165-gr. bullet. For handloading, Nosler also has a Long Range version of the 150-gr. AccuBond with a 0.591 BC. Availability of 27 Nosler ammunition loaded with the standard 150-gr. AccuBond bullet is good news because, at the conservative distances that I and most other hunters take big game, it retains a higher percentage of its original weight than the two Long Range versions.

A 1:10″ rifling twist rate has long been standard for the .270 Win. among American manufacturers, but to assure complete stabilization of the new lengthy bullets, twist rate for the 27 Nosler is 1:8.5″. And while Berger considers 1:8″ to be optimal for the 170-gr. Elite Hunter, it delivered excellent accuracy from the slightly slower twist of the Nosler test rifle. The G1 BC for that bullet is 0.662. Uniformly round holes in paper targets indicated stability with all bullets tested.

The 27 Nosler is presently available in two Model 48 variants, the Mountain Carbon with a 24″ barrel and the Long-Range Carbon with a 26″ barrel. Carbon-wrapped, stainless-steel barrels with cut rifling made by PROOF Research are shipped to Nosler where they are chambered, headspaced and installed onto Model 48 actions. A slow tour through the bore with a Lyman Digital Borecam revealed extremely smooth, six-groove, hand-lapped rifling. Advertised weights are 6 lbs. for the Mountain Carbon and 7 lbs. for the Long-Range Carbon. On my digital postal scale, the Long-Range Carbon in 27 Nosler weighed 6 lbs., 15 ozs., and that’s close enough. The addition of a Nightforce 3-10X 42 mm scope, Talley 30 mm rings and Picatinny rail, along with three 27 Nosler cartridges and a light nylon sling took the hunt-ready weight to an ounce past 9 lbs. Other chambering options for the Long-Range Carbon rifle are 6.5 mm Creedmoor, 26 Nosler, 28 Nosler, .300 Win. Mag., 30 Nosler and 33 Nosler.

The 27 Nosler is not presently offered in the Model 48 Long-Range with its all-steel barrel, but since the other Nosler cartridges are available in it, the 27 Nosler is likely to follow eventually. While it is 13 ozs. heavier than the Long-Range Carbon, it is also $385 less expensive. Both rifles depart the factory with the same one-m.o.a. accuracy guarantee.

Torx-head bolts at the front and rear of the receiver secure the pillar-bedded action to a Manners MCS-T Elite Tac stock while the barrel free-floats. Made entirely of carbon fiber, the stock has a durable Elite Midnight Camo finish, and its angled comb is high enough for a good cheek weld with one of the huge scopes many hunters are fond of today. Comb height also proved to be a comfortable fit with the lower mounting of the relatively small Nightforce scope I used when shooting the rifle.

A clearance notch at the front of the comb allows the bolt to be removed without dinging the stock. Both sides of the wrist and fore-end have textured panels, but when hands become cold and wet during a hunt, molded-in checkering would offer a more secure grip. The flat-bottom fore-end snuggles nicely into a sandbag, and yet measuring 1.88″ wide at its midpoint, it is narrow enough for a comfortable fit with the hand. A Pachmayr Decelerator pad does a good job of soaking up recoil. My only criticism of the stock is the large size and shape of its grip. It begins with a circumference of 5.5″ near the receiver and then abruptly swells to a much larger handful.

The action and the aluminum bottom metal have a Cerakote finish in Sniper Grey. Nosler has used several different triggers through the years, and this one has a fully adjustable Timney with a two-position safety that, when engaged, allows the bolt to be rotated for loading and unloading the chamber. The safety can be pushed off quietly, and that’s a detail to look for when shopping for a big-game rifle. Ten pulls on a Lyman digital gauge averaged 3 lbs., 3 ozs., with a variation of only 3 ozs. No creep or overtravel were evident. A recent change was made in the Model 48 action. Since day one, the 4140 steel bolt was investment cast by an outside contractor then machined to final dimensions at the Nosler plant. The type of steel remains the same, but the bolt is now machined by Nosler from bar stock.

While the two loads offered by Nosler are capable of covering a lot of hunting territory, I wanted to see how bullets of other weights would perform in the Long-Range Carbon with its 1:8.5″ twist. I began preparing handloads by first running virgin 27 Nosler cases through an RCBS full-length resizing die and then used a Lyman E-ZEE Prime tool to seat Federal GM215M primers. Powder charges were dispensed with an RCBS Matchmaster, and bullets were seated with an RCBS Gold Medal die with sliding case guide and floating seating stem. Pressure-tested data came from Nosler, Hodgdon and VihtaVuori.

The Model 48 Long-Range Carbon, with a Manners MCS-T Elite Tac carbon-fiber stock and a 26″ PROOF Research carbon-wrapped stainless steel barrel in 27 Nosler, weighs roughly 7 lbs. Until recently, the bolt (r.) started as an investment casting and was then machined to its final dimensions, but it is now cut from 4140 bar stock.

Prior to working with the Model 48 Long-Range Carbon, I wondered if an interior magazine length of 3.425″ would rule out the use of some extremely long, high-ballistic-coefficient bullets available from other companies. That did not turn out to be true. For trouble-free feeding of any bolt-action rifle, I prefer to keep maximum Cartridge Overall Length 0.020″ shorter than interior magazine length, and that would be 3.405″ for the Model 48. The Berger 170-gr. Elite Hunter was most accurate when seated into the case for 0.045″ of free travel prior to rifling engagement during firing. Overall cartridge length was 3.388″. The Cutting Edge 140-gr. MTH carved its smallest groups with 0.035″ of jump, and that put cartridge length for it at 3.402″. For old-school hunters like myself, I included the grand old Nosler 160-gr. Partition in my tests, and there is more than enough room in the magazine for it. Years ago, I took a very good Alaska/Yukon moose with that bullet loaded in the .270 Win., and it would also be an excellent choice for the 27 Nosler.

I seldom notice recoil when shooting a rifle at game, but a muzzle brake is nice to have when accuracy testing and developing handloads. The thread protector on the Model 48 weighs 0.5 oz., and replacing it with an extremely effective, three-port titanium brake available from Nosler weighing only 2.2 ozs. added very little weight to the rifle. Due the slight weight difference between the two, along with the stiffness of the PROOF Research barrel, once the rifle was sighted in the thread protector and the brake could be interchanged with no effect on zero. According to my internal “kickometer,” recoil with the brake is about the same as for an 8-lb. rifle in .270 Win. without a brake. 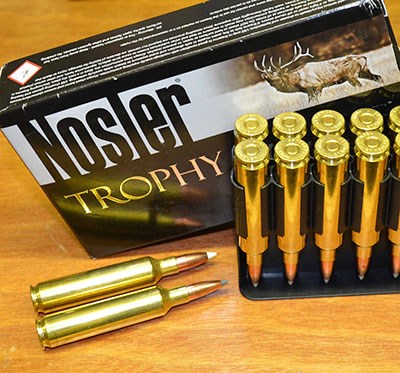 Nosler guarantees minute-of-angle accuracy for three-shot groups with the company’s ammunition, and the 150-gr. AccuBond load came close to living up to its billing. Among my handloads, Reloder 25 and the Swift 130-gr. Scirocco II won the velocity race, while the combination of VihtaVouri N570 and Berger 170-gr. Elite Hunter took top accuracy honors by consistently shooting inside an inch at 100 yds.

Extremely important on a big-game rifle, all cartridges fed smoothly from the magazine. The Sako-style extractor plucked fired cases from a dirty chamber without missing a beat, and the spring-loaded plunger ejector propelled spent cases through the port smoothly and with great authority. Single-loading was equally smooth. Should you shoot the magazine empty and there is no time to reload, simply toss a cartridge through the ejection port, slam the bolt home and press the trigger.

Many hunters of my age find it difficult to think of a cartridge loaded with a .277″ bullet without the name Jack O’Connor coming to mind. For those who do not know, O’Connor was a prolific firearm writer who bought a rifle in .270 Win. when the cartridge was introduced in the Winchester Model 54 in 1925, and during the following half century or so used the .270 to take big game in various parts of the world. He hunted with and wrote about other cartridges, including the 7×57 mm Mauser, .30-’06 Sprg. and .375 Holland & Holland Magnum, but it took very little reading between the lines to see that the .270 was his favorite.

O’Connor passed away in 1978, but if he were still with us today would he abandon his beloved custom rifles in .270 Win. in favor of the 27 Nosler? I think not. The .270 Wby. Mag. was introduced when he was still climbing sheep mountains, and if he ever hunted with it, I don’t recall reading about it. 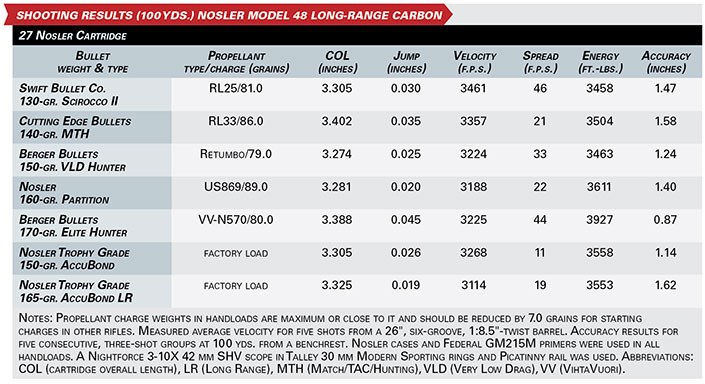 The 27 Nosler is an impressive cartridge, but I don’t believe anyone reading this will live long enough to see it entirely replace the .270 Win. in the hands of America’s hunters. If anything, the grand old cartridge will receive much needed attention in comparisons such as I have made in this report. Rather than illustrating that the original American .270 is over-the-hill, occasional moments in the limelight along with quick-twist barrels and new bullets may show it to be even better than Jack O’Connor claimed.

There is Talk of Civil War in “The Land of More Guns Than People” – Are You Ready to Start Shooting?