June 30, 2022 Guns In The News
Home»Commentary»The ATF Moves to Unilaterally Define What a Gun Is
Commentary

The ATF Moves to Unilaterally Define What a Gun Is

Last spring, President Joe Biden (D) publicly touted his administration’s gun-control agenda, which included, among other things, directing the Bureau of Alcohol, Tobacco, Firearms and Explosives (ATF) to issue new regulations on the un-serialized, privately made firearms labeled by the anti-gun movement as “ghost guns.” When the agency issued a draft of the new rule in May of 2021, many gun owners raised serious concerns about the rule’s scope, ambiguous language and potential to interfere with the longstanding American tradition of private gunsmithing. Americans submitted almost 300,000 comments to the agency regarding the proposed rule, most of them critical.

Like the draft rule, the final rule regulates the sale of unfinished firearm frames and receivers if those unfinished parts are “readily convertible” into finished ones. This includes unfinished frames and receivers sold in do-it-yourself “ghost-gun kits,” which sometimes come with the tools and additional parts needed to finish the frame or receiver and assemble it into a functional firearm. 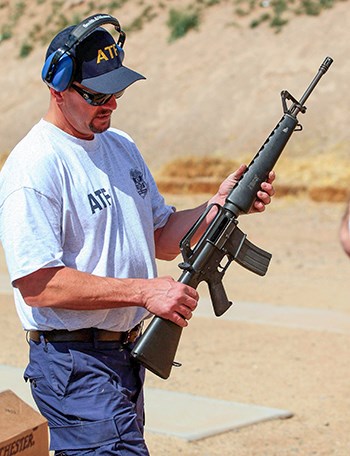 Under existing federal law, only finished frames and receivers are regulated as firearms, meaning these partially finished items need not be marked with serial numbers, do not require a background check to purchase and may be purchased by individuals who are prohibited from owning firearms. Of course, it is still illegal for prohibited persons to make or possess a finished, functional firearm.

Under the new rule, these “readily convertible” unfinished frames or receivers (or DIY kits containing them) will be regulated just like finished ones, which in turn are regulated in the same manner as functional firearms—to be lawfully bought or sold on commercial markets, they must be marked with a serial number, sellers must obtain a federal firearms license (FFL) and buyers must comply with state and federal gun laws.

Importantly, the ATF went out of its way to specify that un-serialized, privately made firearms are lawful for unlicensed individuals to create, possess and even to sell under some circumstances. The new regulations apply only to commercial sales by those “engaged in the business” of selling firearms (or, in this case, unfinished frames and receivers).

The agency also revised its final rule to clarify which portions of “split receiver” guns must contain serial numbers, and to reduce scenarios in which a single privately made firearm might end up with multiple serial numbers.

The ATF’s new test for distinguishing “readily convertible” unfinished frames and receivers from “non-readily convertible” ones is incredibly vague and offers FFLs anything but a clear line. An unfinished frame or receiver is deemed to be “readily convertible” based on an imprecisely weighted combination of nearly a dozen factors, and the ATF refers to a series of cases indicating that the line might be somewhere between needing eight hours in a machine shop to finish the part and needing a master gunsmith with tens of thousands of dollars of specialized equipment to finish the part.

Additionally, hidden within the rule are several new bureaucratic burdens for FFLs, all of which will have very real and substantial financial impacts.

While private citizens may make and possess un-serialized firearms, any FFL that takes such a gun “into its inventory” must mark it with an identifying number and record information about the transfer just as it would for any commercially manufactured gun, including the identity of the person from whom it was received or to whom it is transferred. If this sounds like a lot of new paperwork, that’s because it is.

Moreover, the new rule piles onto this additional burden by increasing the length of time for which FFLs must retain not just these new records, but all records related to background checks and gun sales.

Nowhere has Congress authorized the ATF to regulate “almost-frames” or “almost-receivers.”

Under current laws, FFLs must keep these physical records for at least 20 years, so that the FBI and ATF may access them during investigations. Now, FFLs will have to retain these physical paper records until the company goes out of business or ends its licensure, at which time the records must be sent to ATF. This could mean decades of records requiring even smaller licensees to rent expensive off-site secure storage facilities due to ever-increasing storage needs through several generations of owners.

The ATF claims that roughly 1,000 firearms a year cannot be successfully traced because the records were more than 20 years old and were tossed by the FFL, so the changes in record retention will better enable the agency to combat crime. What the ATF does not explain is that it conducted over 300,000 gun traces in 2020 alone, and that 1,000 failed traces constitute a mere fraction of a percent of all traces—hardly a significant hindrance.

In other words, the ATF wants to substantially burden FFLs despite knowing that these costs will drastically outweigh any expected benefit.

But even beyond these practical problems lies a much more fundamental problem with the rule: The ATF simply does not have the authority to regulate unfinished frames and receivers in the first place.

The ATF may think that requiring serial numbers and background checks for unfinished frames and receivers is a good idea, even though this is not how most criminals acquire their guns. It may argue that its new rule presents a “reasonable” way of regulating gun-kit sales while still allowing peaceable Americans to build and possess homemade guns.

But when Congress passed the Gun Control Act of 1968, it regulated firearms and specific firearm parts like frames and receivers. Nowhere has Congress authorized the ATF to regulate “almost-frames” or “almost-receivers.” So, sensible policy or not, the unelected bureaucrats at the ATF cannot stretch out their hands to regulate beyond the limits of the statutes passed by Congress.

In our system of government, the power to make and change laws belongs to Congress, and to Congress alone. It does not belong to executive agencies—not even those that purport to act reasonably.

Amy Swearer is a legal fellow in The Heritage Foundation’s Meese Center for Legal and Judicial Studies.

The ATF Moves to Unilaterally Define What a Gun Is