The First 50 Years Of Ruger’s Blackhawk

Sturm, Ruger & Co. introduced its first center-fire revolver in a full-page advertisement in these pages back in August 1955. The new six-shot revolver was the Ruger Blackhawk, catalog number BKH-3, chambered in .357 Magnum. The gun was named after one of William B. Ruger’s favorite automobiles; the Stutz Blackhawk, and its design was reminiscent of the then-discontinued Colt Single Action Army. 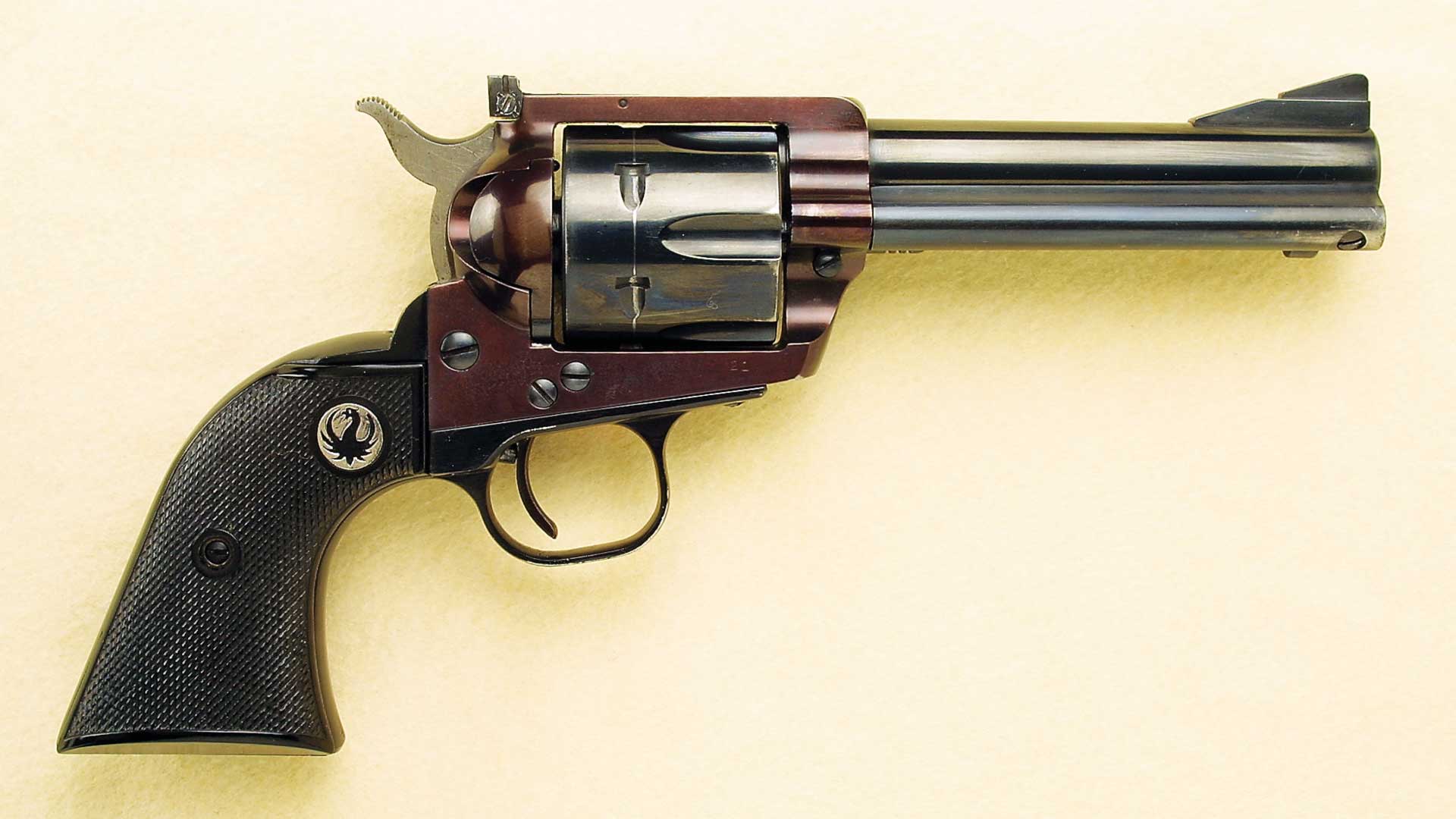 But that was about as far as the similarity went, Ruger’s new handgun was as modern as tomorrow. Its flattop frame was investment cast of chrome-molybdenum steel. The one-piece grip frame was lightweight cast aluminum alloy, and virtually unbreakable coil springs were employed throughout the gun. The Blackhawk came standard with a 4 5⁄8″ barrel, a steel micro rear sight with adjustments for windage and elevation, and a ramp-type front sight. Grips were checkered hard rubber with the Ruger logo medallion set in both panels. 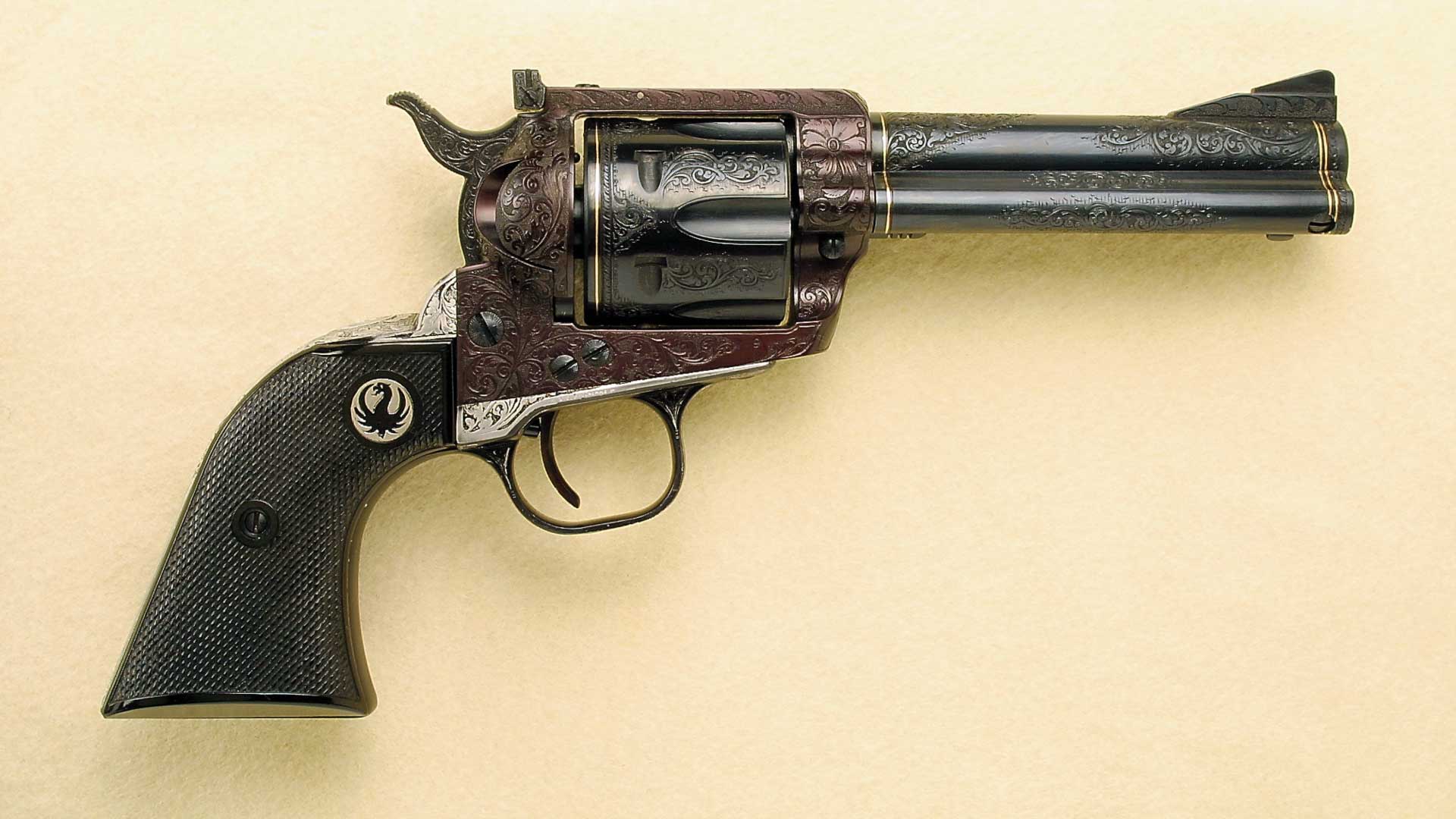 All the steel parts were polished and blued, while the grip frame was anodized black. The gun became affectionately known as the “Flattop,” and the 1955 Ruger catalog stated that “Presentation cases and engraved guns will be available.” Production of the then-new gun couldn’t keep up with demand, and these advertised options never really materialized.

During the first year of production—only six years after Sturm, Ruger & Co. was founded—approximately 1,750 Ruger Flattops were produced. The suggested retail price? A mere $87.50. Sounds great today, but when you account for inflation, that’s just over $900 in 2022. 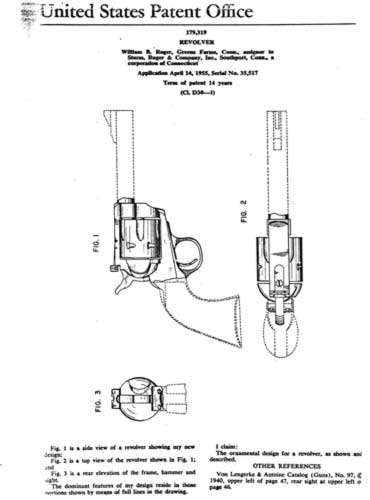 Changes were coming to Bill Ruger’s first single-action. In 1962, Ruger introduced the new “protected sight” cylinder frame at around serial No. 42,700 and incorporated this feature into subsequent Blackhawks. The grip frame was also redesigned, and it was slightly larger than the original. This change marked the end of the “Flattop.”

The Blackhawk went through another major change in 1972 when a “transfer bar” was designed into all of Ruger’s single-action revolvers. This safety feature prevented an accidental discharge resulting from a fixed firing pin resting against the primer of a chambered cartridge. The transfer bar allowed the revolver to be safely carried with all six chambers loaded. This revolutionized the modern single-action revolver and resulted in a new name for the gun: the New Model Blackhawk.

In the early days of the Blackhawk, Bill Ruger Sr. presented his friend John T. Amber, editor of Gun Digest, with a consecutively numbered pair of .357 Mag. Flattops, serial Nos. 9 and 10. Before the presentation, the two Flattops were sent to Master Engraver E.C. Prudhomme, who performed the engraving and gold inlay. The initials “JTA” were inlaid in gold on each, just over the cylinder. Number 9 displays a silver mountain goat overlay on the recoil shield, and a silver lion is featured on No. 10. Gold bands were inlaid at the back of both cylinders and at the front and rear of each barrel. Before his death in 1986, Amber sold the guns to a collector, and the pair has since been separated and sold to two different collectors. 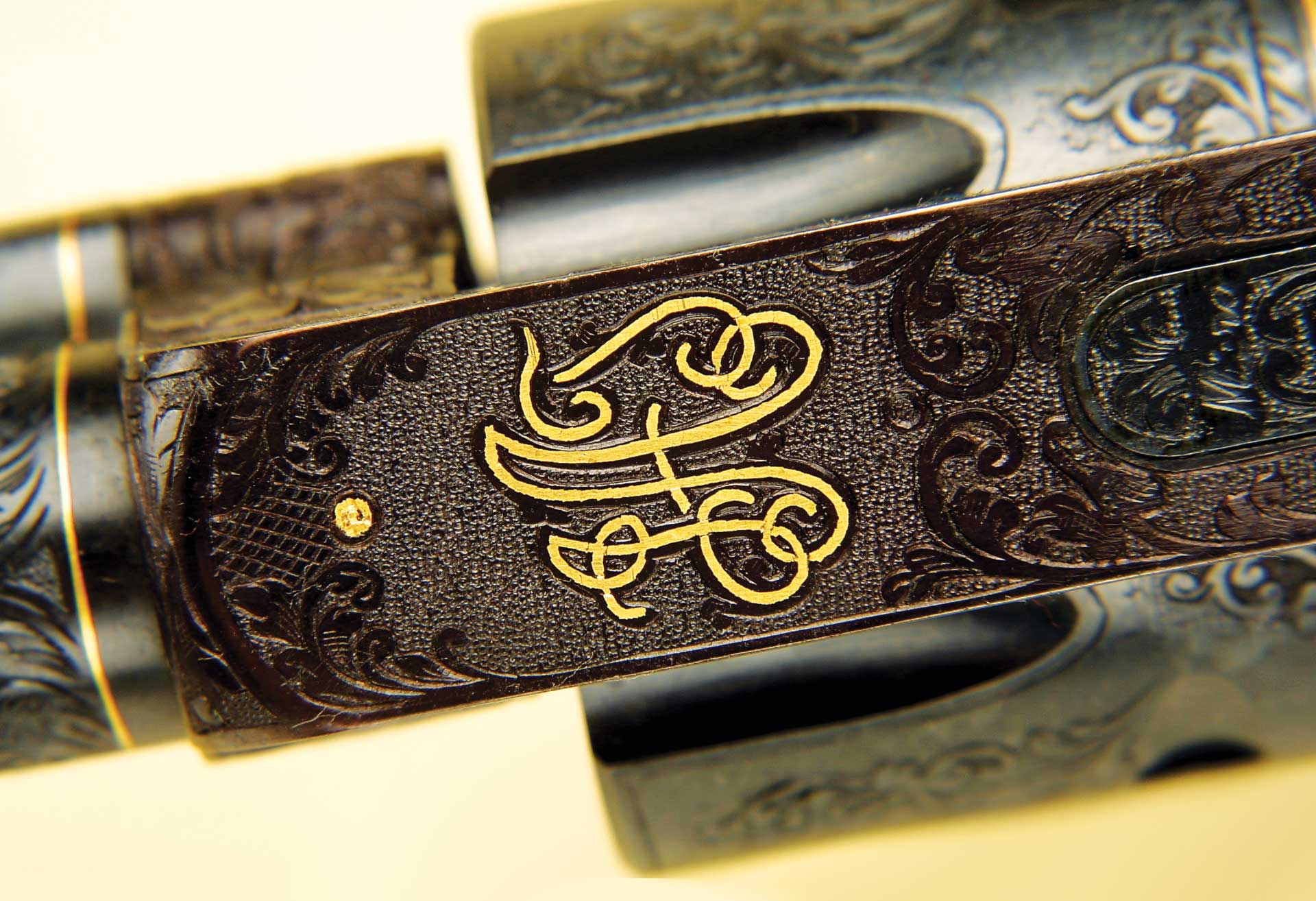 The initials JTA (John T. Amber) are inlaid in gold in the topstaps of both the Number 9 and 10 original Blackhawks. The engraving also cut through the anodozing of the aluminum grip frame.

To celebrate 50 years of the .357 Mag. “Flattop” Blackhawk, Sturm, Ruger & Co. produced the 50th Anniversary New Model Blackhawk, NVB34-50. Serial numbers start at 520-00001, and those Blackhawks are close replicas of the original 1955 models. The smaller grip frame is back, although in steel rather than aluminum. The grip panels are checkered hard rubber with old-style black logo medallions, and the all-steel micro sight is again set flush in the back of the flattop frame. This gun has the transfer bar, so there are two pins in the frame instead of the three screws as in the original. Another new feature is a reverse-indexing cylinder pawl, which aligns the cylinder with the loading-gate cut-out for easier loading and unloading. To make cocking easier, a new improved hammer spring is incorporated as well.

Another added safety feature is the hammer-strut action lock on the grip frame at the base of the mainspring, but it is unobtrusive, being mostly hidden by the stocks. The front edge of the cylinder has a slight bevel, which is a very nice feature (especially for holstering) not present on the earlier Blackhawks. 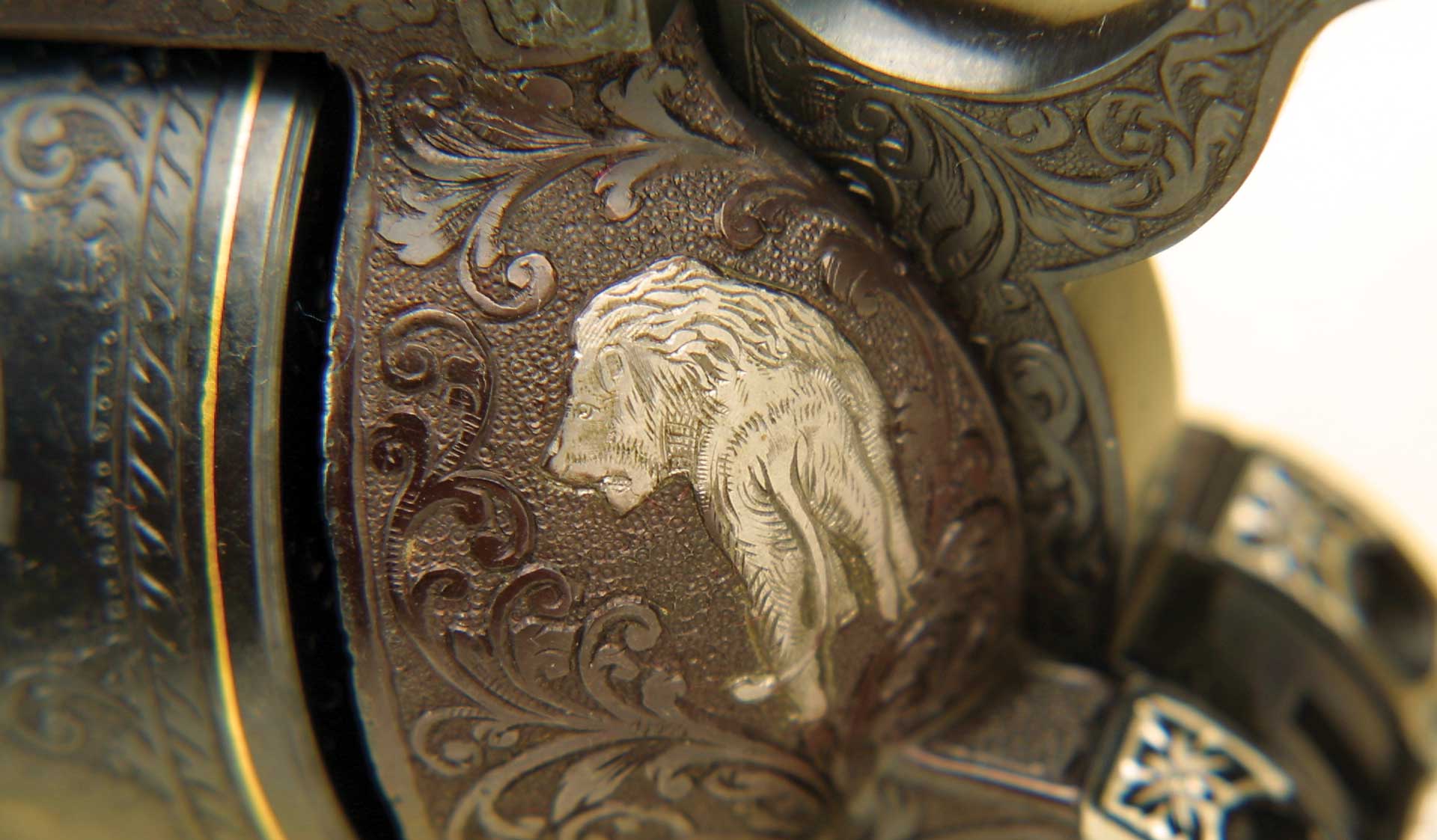 A commemorative gold roll mark is on the top of the barrel: “50TH YEAR BLACKHAWK 1955 TO 2005.” Each gun is packaged in a special red plastic case with the 50th Anniversary logo on top, and a Blackhawk history booklet is furnished. At a suggested retail price of $583 and only offered through the end of this year, you’d better buy two—one to shoot and one to put in the safe as an investment. Original 1955 models are sought after by collectors. Some go for $500, but others fetch sums well into the thousands (if you can even find one).

The initials JTA (John T. Amber) are inlaid in gold in the topstaps of both the Number 9 and 10 original Blackhawks. The engraving also cut through the anodizing of the aluminum grip frame.

The release of the 50th Anniversary New Model Blackhawks sparked interest in the original John T. Amber guns. It’s only fitting that the 9th and 10th revolvers in the new series be engraved to celebrate the original. Since Master Engraver E. C. Prudhomme is no longer with us, I contacted Ruger to see if factory engraving was available. In the early days, factory engraving was not done in-house but contracted out. But now there’s The Ruger Studio of Art and Decoration under the leadership of Master Engraver Paul Lantuch. Based on the customer’s wishes, custom grips, about any style and degree of engraving, inlay, and “full-custom” treatments are available. 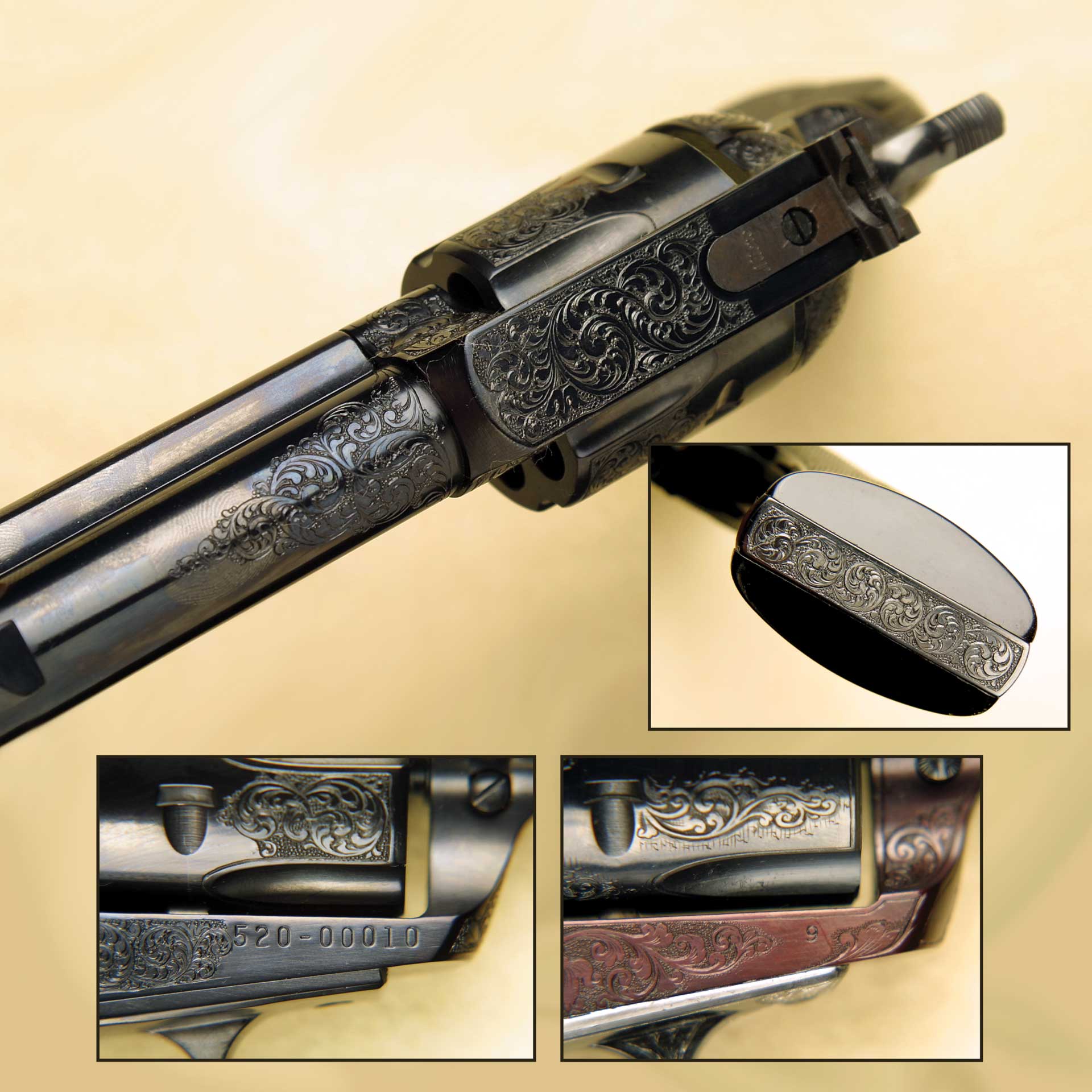 Ruger 50th Anniversary New Model Blackhawks numbered 520-00009 and 520-00010 were lavishly engraved at The Ruger Studio of Art and Decoration.

The degree of embellishment offered by The Ruger Studio of Art and Decoration was limited only by the customer’s imagination and the amount he wanted to spend. A level III coverage in Western scroll was chosen for the two Anniversary Blackhawks. As the decision was made to have the guns engraved, production had just begun. The pair was pulled from the production line and transferred to The Ruger Studio of Art and Decoration in Southport, Conn.

The matched pair of 50th Year Blackhawks was shipped from the studio on March 16. They are truly magnificent, and the engraving truly represents the gunmaker’s art at its best. The blued finish is superb, the grips and all metal parts fit like one might expect on a custom-made $10,000 trap gun.

This feature article, “Ruger Flattops: Then And Now,” appeared originally in the September 2005 issue of American Rifleman. To subscribe to the magazine, visit the NRA membership page and select American Rifleman as your member magazine.

The First 50 Years Of Ruger’s Blackhawk