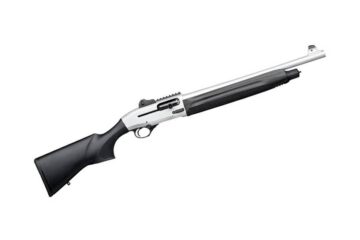 May 14, 2022 Guns In The News
Home»Commentary»The Military Market & Its Benefits for the Consumer
Commentary

When the U.S. Army announced a SIG Sauer entry based on its P320 was the winner of the Modular Handgun System (MHS) contract in early 2017, headlines immediately focused on the $580 million value of the 10-year contract. The pistol is currently being issued as the M17 and M18 to rave reviews, but there are other reasons the company takes pride in the design and service to our country.

SIG Sauer Vice President of Product Management, Defense & Law Enforcement Robby Johnson said the staff had a little-reported motivation as it worked tirelessly on the submission. “One third of the nearly 2,000 SIG Sauer employees are veterans or former law enforcement officers,” he explained. “So, it’s a great honor, along with an incredible understood responsibility and urgency to provide the highest-quality, most-innovative products to the military and all of our public safety officials.”

Sidearms are not the company’s only products on the front line of freedom, either. Members of the U.S. Military are also using SIG Sauer Tango6T SOCOM and Tango6T SDMR optics and MCX SURG, MCX Rattler and MPX firearms. Its most-recent submission was selected among the final three vying for the Next Generation Squad Weapons System contract.

It’s a diverse portfolio, one Johnson said is made possible because, “SIG Sauer is more than just a firearm company. We take a very holistic approach by providing one source of manufacturing for firearms, optics, ammunition, suppressors and accessory lines, and we feel this gives us a competitive edge within the industry for both our military and commercial consumers.”

The U.S. military uses a variety of parts produced by Daniel Defense, and when asked if competing for those contracts helps, Joseph Scull, director of the company’s military, law enforcement and international sales explained, “It can help at times, especially in regard to deciding what testing needs to be done, and the military does have rigorous standards for rifles in regard to durability, reliability and ability to stand up to extreme environmental conditions. On the other hand,” he cautioned, “the military is extremely slow to procure new technologies. So, they don’t necessarily drive innovation…An average American [who] takes part in 3-gun shooting, for example, typically has a rifle that is far more advanced than the M4 the average Soldier carries. Better materials, lighter weight, more accurate.”

Although Daniel Defense delivered 40,000 rail systems to the U.S. military in 2006, the company never lost focus on serving civilian shooters. As for company gear currently guarding freedom, “It’s a huge honor to have our products in the hands of our Soldiers, Marines, Airmen and Sailors,” Scull said. “Knowing that we are helping them get their job done is a great feeling and quite humbling. Coming from a military background myself, it is also amazing to see the abuse that they put our gear through at times and have it still keep working.”

Does that innovation filter into the civilian market? When Beretta’s MHS submission was not selected, it introduced that M9A3 pistol with some of the improvements to civilian enthusiasts within months. The approach is similar at SIG Sauer. “It is a conscious decision by the SIG Sauer team to rapidly implement the newest technologies, manufacturing processes and best practices learned from the demanding military customer and bring them to the civilian enthusiast,” Johnson, a former Army Ranger, said. “The same quality goes into every firearm and product…our manufacturing staff don’t even know whether a product is being built for the commercial or professional market.”

The approach of both companies makes it obvious enthusiasts stateside have access to the latest and most innovative semi-automatic firearms and accessories available. All of it up to military standards and in some cases, better.