When 28-year-old Marine Andrew Biggio bought an M1 Garand, he never imagined the journey that would ensue. The Rifle, as it would come to be known, was purchased in honor of Biggio’s uncle, who was killed in Italy during World War II. He brought his new purchase to his neighbor, Joseph Drago, a combat veteran of the war. When Drago saw the rifle, memories that had been buried since the end of the war began to float to the surface. After hearing Drago’s stories, Biggio asked him to sign his rifle. Thus began a two-year journey to find as many surviving World War II veterans as possible, giving each of them a chance to sign the rifle and share their stories. 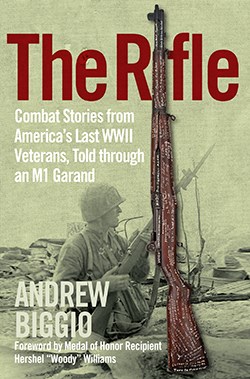 Through its 278 pages, The Rifle chronicles the living memories of 96 combat veterans, all of whom held Biggio’s rifle and remembered when they carried their own example into battle. More than three-quarters of a century have passed since the Axis surrender in 1945, and the youngest of World War II’s surviving participants are now in their nineties. Of the 16 million Americans who served during the war, the U.S. Department of Veterans Affairs estimates that fewer than 240,000 are still alive. Biggio’s mission archives some of the last eyewitness accounts of a world torn by war. regnery.com