February 6, 2023 Guns In The News
Home»Commentary»The Vz. 52: From Suez to the Bay of Pigs
Commentary

This article, “Vz. 52: From Suez to the Bay of Pigs,” appeared originally in the March 1992 issue of American Rifleman. To subscribe to the magazine, visit the NRA membership page here and select American Rifleman as your member magazine.

The general staff of the Czechoslovak Army set out principles for that nation’s postwar small-arms development on Aug. 1, 1946, when it issued requirements for a new self-loading rifle. These included accurate point shooting at ranges up to 1000 meters, a magazine capacity of five to 10 rounds and a maximum weight of 8.9 lbs. Further, the new rifle was to be as effective as the existing Model 24 Mauser rifle for use by snipers and for firing at low-flying aircraft.

The Military Technical Institute responded to these instructions by pointing out the need for an “effort to replace the repeating guns by reliable automatic rifles (like the American Army).” It also noted the well-known inaccuracy of contemporary full-power rifles in automatic fire and recommended an intermediate-power cartridge, as used by the Germans in the recent war, be specified for any new infantry rifle. On Dec. 24, 1946, the chief of the general staff agreed that rifles using intermediate-power cartridges should be part of the test program.

The vz.52 is distinguished from the later vz.52/57 by its more squared-off magazine box.

Experimentation with intermediate-power cartridges, that is, those ranking in power between pistol rounds like the 9 mm Parabellum and bolt-action rifle ammunition like the .303 British or 7.92×57 mm Mauser, had continued under German control through most of the war at Zbrojovka Brno. Both 7 mm and 7.92 mm rounds were tried under the designation “Rapid.” In 1946, the desired caliber was specified as 7.5 mm, and several cartridge variants were developed in that size by Prof. dipl. Ing. Farlik.

A considerable number of these were produced the next year with the code number Z 47; as development progressed, this was changed to Z 49. Both Zbrojovka Brno and the Czech Munitions Factory (CZ) of Strakonice presented prototypes, both in gas-operated and recoil operated systems. The most successful was a CZ product developed by J. Kratochvil: the CZ 493.

Though Czechoslovakia had traditionally looked to the West, particularly to France, Soviet influence was, by the end of 1947, making itself felt throughout Czech industry and life. In arms development, this manifested itself in the change of desired caliber from 7.5 mm to the Soviet standard 7.62 mm. Curiously, the case length of the Model 49 cartridge, 45 mm, was retained. 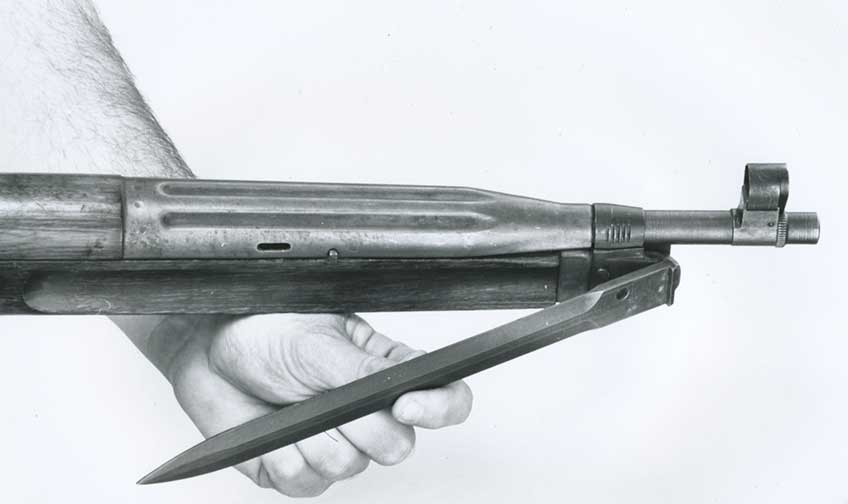 The bayonet is hinged at the fore-end.

The new 7.62×45 mm round was designated the Z 50. After extensive testing, the CZ 493 was chosen as the most promising candidate for development. The Military Technical Institute asked for several changes. A folding knife bayonet was to be substituted for the original’s spike. Several detail changes were ordered for the trigger and breechblock, and the buttplate was adapted for a cleaning kit in the fashion of the Soviet SKS45.

By March 1951, a prototype with the desired changes was being field-tested under the designation CZ 502. The two mechanized regiments involved found the rifle’s accuracy and reliability satisfactory, and its size and shape convenient for use. It was found fully the equal of the Model 24 bolt-action in firing up to 650 meters and almost as good at ranges up to 800 meters. It was not, however, satisfactory for sniper use. 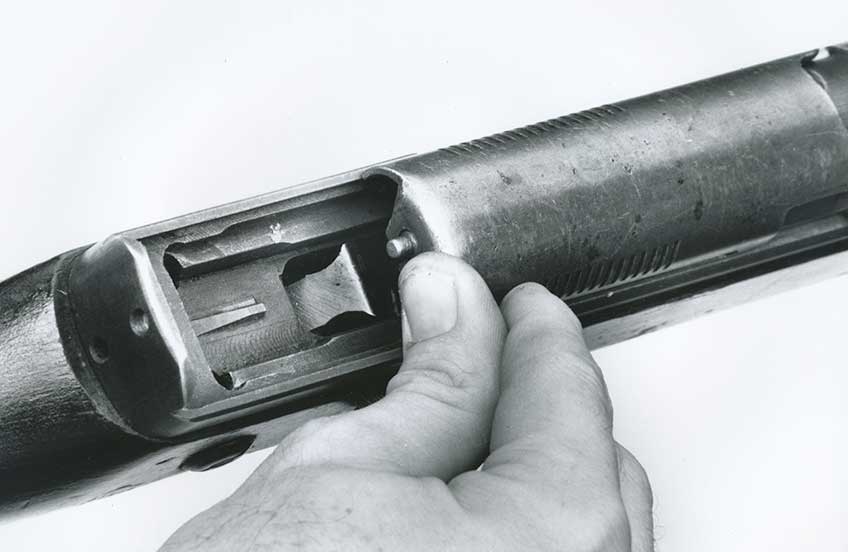 Remove the receiver cover by pushing forward with the thumb and lifting it up and out of its guides. Keep control of the cover to prevent the spring from flying loose.

A few detail changes were made to this prototype, being the substitution of a lighter alloy bayonet and the deletion of the gas regulator. The resulting rifle was designated Model 52 and taken into Czech Army service on March 20, 1952. At the same time, the Z 50 cartridge and a light machine gun were adopted with the same model number. The Model 52 has two features that make it unusual in the ranks of military self-loaders. 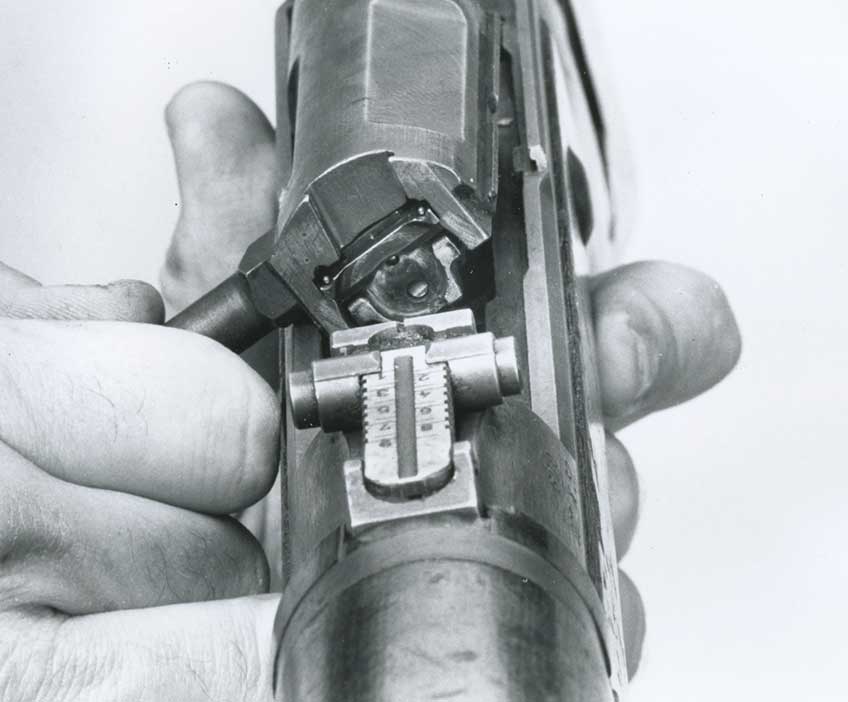 Pull the bolt handle rearward into its disassembly slot and then a bit to the right to remove.

The gas piston surrounds the barrel instead of occupying a separate gas tube as in the case of the AK-47 or FN FAL. On firing, gas escapes from a pair of ports near the barrel’s midpoint and presses rearward on the piston. The piston in turn presses on a half-tube that fits over the top of the barrel. The half-tube’s other end bears on a spring-loaded actuator whose two arms pass through holes in the front of the receiver under the rear sight. 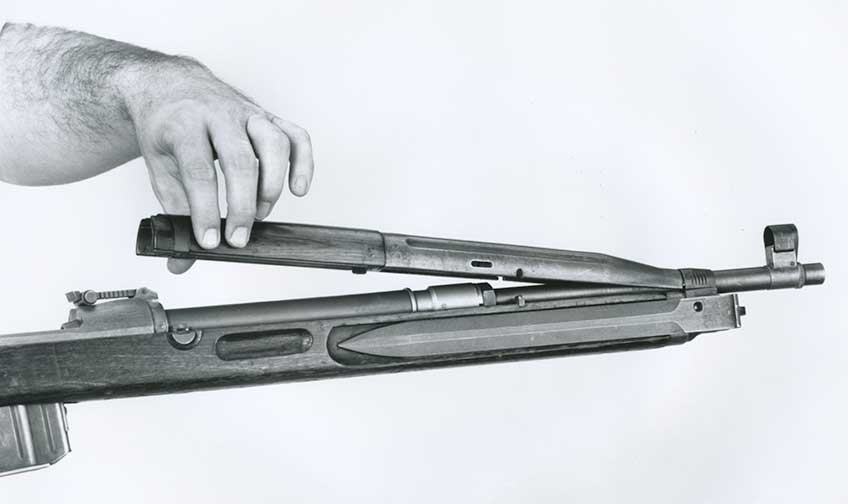 Press in on the clips at the rear of the handguard and lift it up to remove. It is a curiously designed combination of wood and sheet steel.

Those arms, in turn, contact the front face of the bolt carrier. On firing, gas presses the piston, half-tube and actuator rearward, imparting energy to the bolt carrier. That part continues rearward, and cam tracks in its interior pick up lugs on the sides of the breech block. The breechblock is unusual in that it locks by a pair of lugs at its front, rather than at the rear in the manner of most tilting breechblocks. 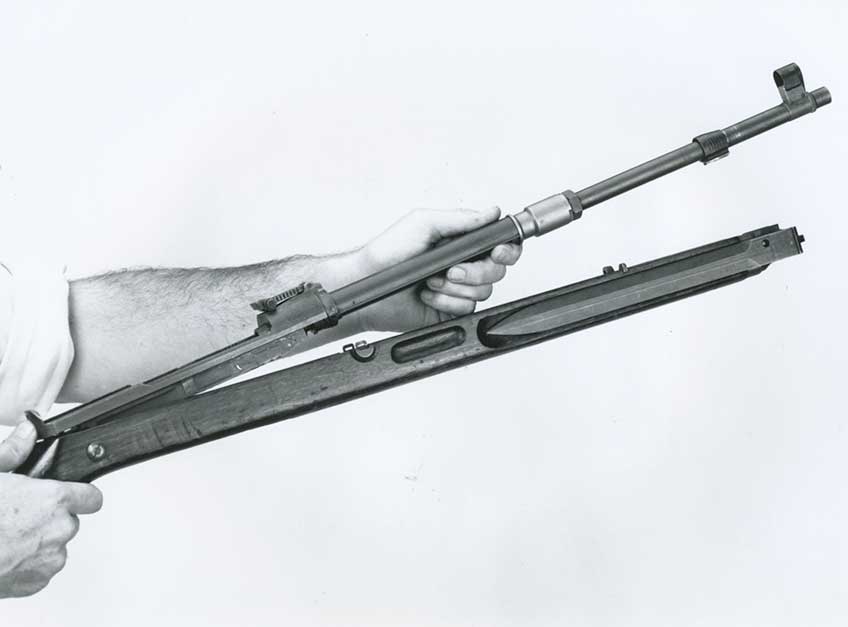 With the trigger group and handguard removed, the barreled action is free to be lifted away from the stock for cleaning or maintenance.

The lugs fit into recesses in the receiver floor, a method that shortens the stress path and, many argue, improves accuracy. On the other hand, the lateral arrangement of the lugs requires a bottom-mounted extractor and a locking bar in the carrier to retain the cartridge during initial extraction. The ejector is a plunger that protrudes through the bolt face when its rear strikes a projection in the receiver. Spent cases are thrown over the firer’s left shoulder. 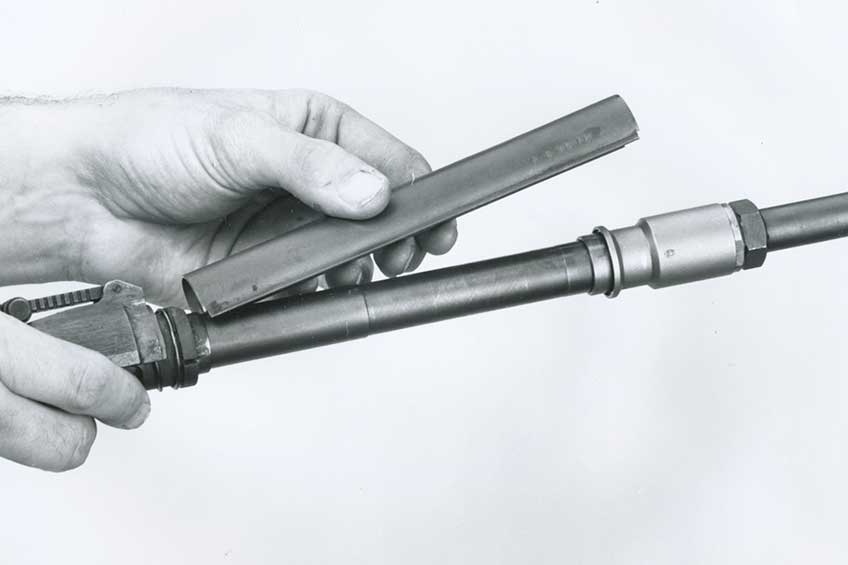 Remove the half-tube operating sleeve by dislodging it from the piston and actuator and lifting it off the barrel.

After ejection, the bolt assembly returns forward, with the cam surfaces inside the carrier pressing the breechblock down into battery. The gas system parts have by this time returned forward by the actuator spring. The magazine is a 10-round double-column box whose follower lifts a breech catch into position after the last round is fired. It can be removed for single loading or can be loaded while mounted in the fashion of the SKS-45.

The trigger group is copied almost without change from the U.S. M1 rifle. The trigger-guard-mounted safety and trigger removal by pivoting the guard bow will be familiar to any user of the M1 or M14. The stock is conventional in shape, and most were made of walnut, though some were manufactured from birch and stained a yellow shade. The center piece of the handguard also is wood, while the handguard nearest the muzzle is of stamped steel. 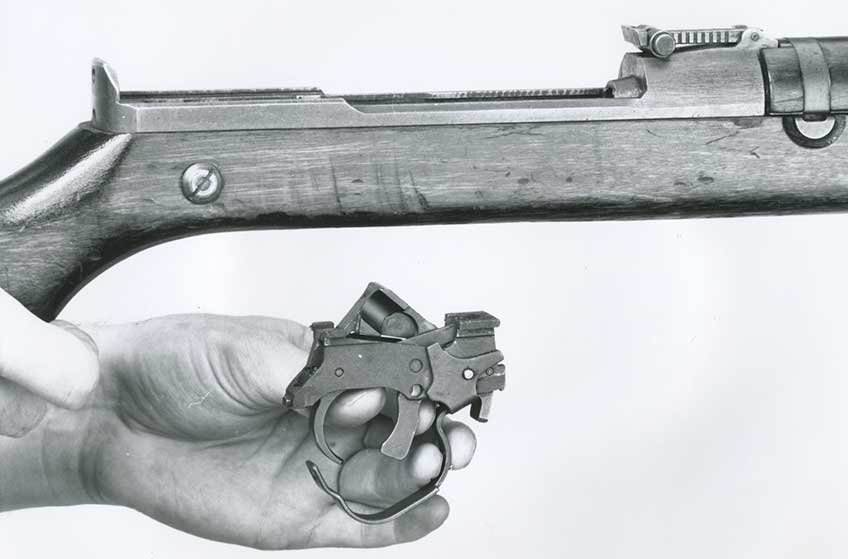 The trigger assembly was frankly copied from the U.S. M1 rifle.

The right side of the fore-end is contoured for the swinging bayonet, which is held in its fixed position by a catch on the fore-end. The post front sight fits into a dovetail in its base and can be driven left or right for windage adjustment. The rear sight is adjustable for elevation from 100 to 1000 meters in increments of 100 meters.

The Model 52 was supplied with a sling, canvas and leather pouch for two magazines, a blank firing device and a cleaning kit that incorporated a three-piece cleaning rod, oil can, brush, gas system cleaner and a muzzle protector, all to be stored in the butt trap. To disassemble the Model 52, first check to ensure the rifle is empty, then remove the magazine. Then move the receiver cover forward out of its guides until the front tips up. 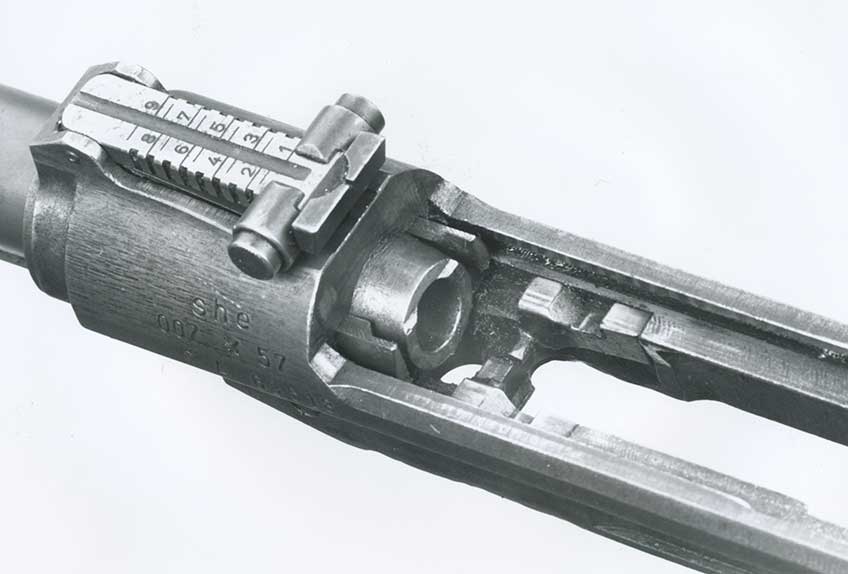 The vz.52 and 52/57 use a tilting-block locking system but with lugs at the front rather than the rear.

Pull the cover straight up and out of the receiver, then ease it to the rear, releasing pressure on the return spring, which then can be removed along with its plunger. Pull back on the operating handle, then pull to the right, moving the bolt assembly into the disassembly slot in the receiver. The bolt assembly then can be lifted out of the receiver.Remove the breechblock from the carrier by pushing it to the rear, then pulling the front down and removing it. 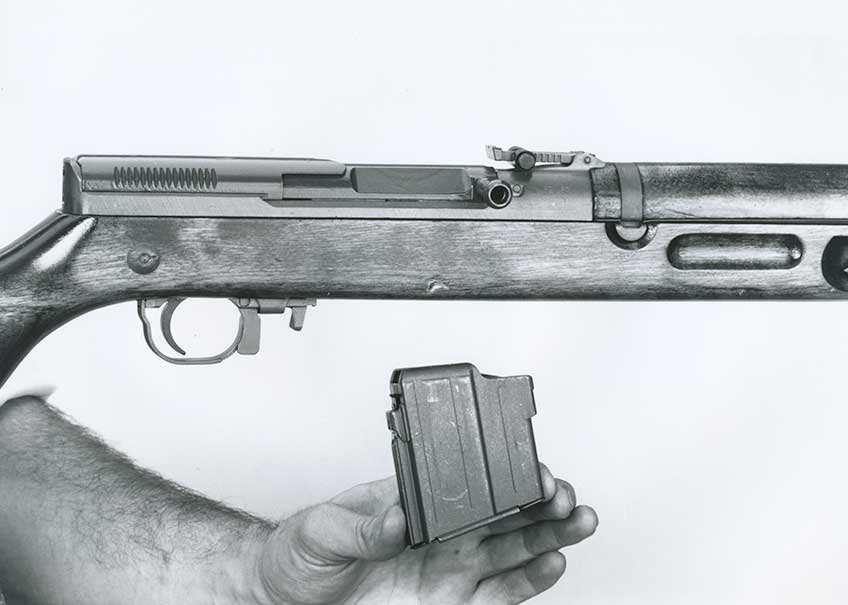 Next, press in the handguard retaining clips and tip up the rear of the handguard assembly, which then is free to be removed to the rear. The trigger group is removed M1 fashion by pulling rearward on the back of the guard bow and then swinging it forward. To separate the action and stock, use a bullet point to press the plunger found on the right side of the fore-end tip under the bayonet (there is a hole in the bayonet for access). 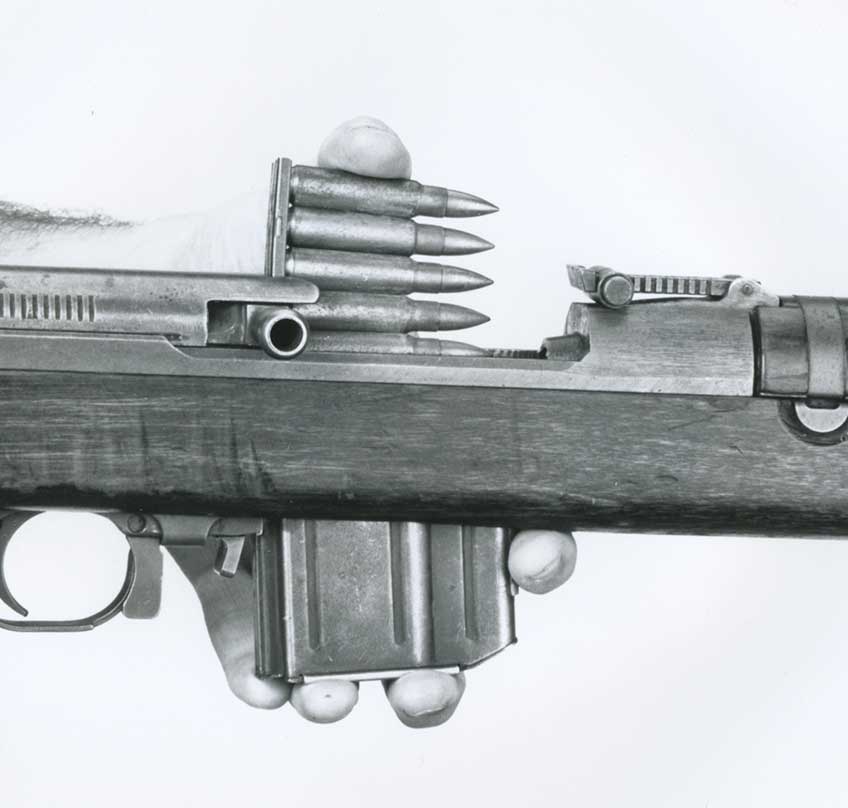 The barrel band is freed by this to slide forward, allowing stock removal. No further disassembly normally should be required, and reassembly is in reverse order. Because the Model 52 was made by the conventional forging and milling methods of the time, has a wooden stock and a permanently attached bayonet, it is rather heavy for the cartridge used at 9.2 lbs.

While this is a disadvantage in carrying, it makes the Model 52 accurate and easy to fire. The extra weight of the folding bayonet also makes the rifle somewhat muzzle-heavy, with a good effect on offhand accuracy. The Model 52 cartridge, light machine gun and rifle had relatively short careers in the Czech Army. As early as 1954, even before the Warsaw Pact was signed in May 1955, the East Bloc nations began discussions aimed at standardizing arms on the Soviet pattern. 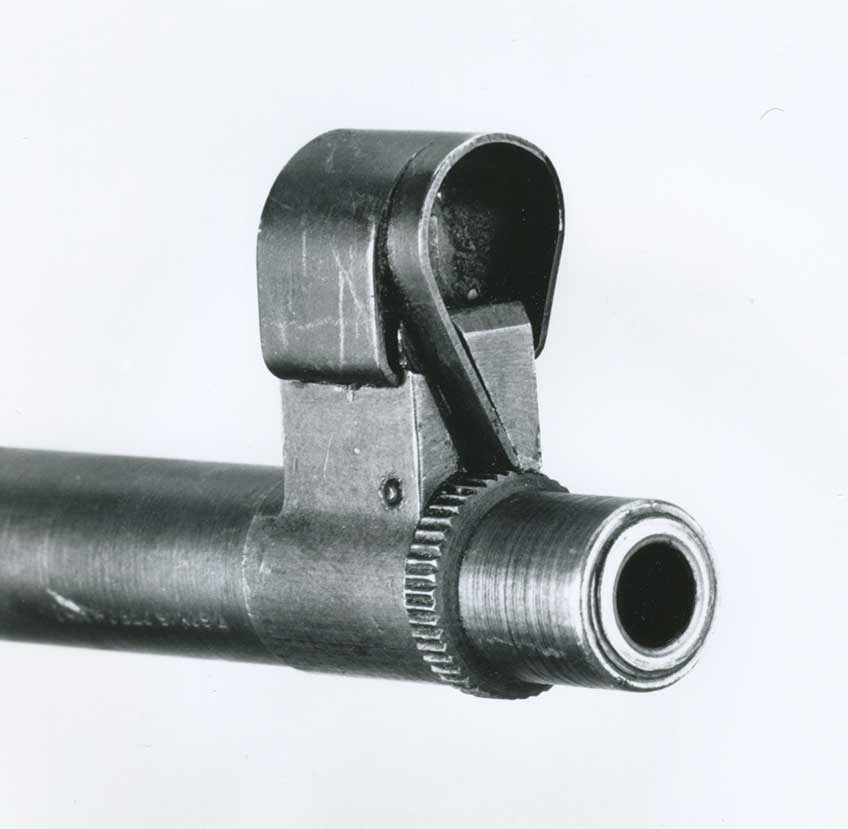 While certain national preferences were taken into account in small arms design, ammunition standardization on the Model 1943 cartridge was agreed upon. Therefore, the Model 52 rifle and light machine gun were redesigned for the 7.62×39 mm cartridge, with the resulting rifle designated Model 52/57. The new version can readily be distinguished from its predecessor by the sloping bottom of its magazine, required by the more tapered shape of the Russian cartridge.

The rear sight was changed, with a maximum elevation of 900 meters, and a new cleaning kit was issued. Even the Model 52/57 had a brief career in Czech service, being displaced by the far more advanced Model 58 rifle, a gun that resembles the AK-47, but whose locking system resembles that of the Walther P.38 pistol. The Model 52 and 52/57 rifles have been widely made available to Communist and neutralist nations like Cuba, Egypt and Syria (many were captured in Grenada). 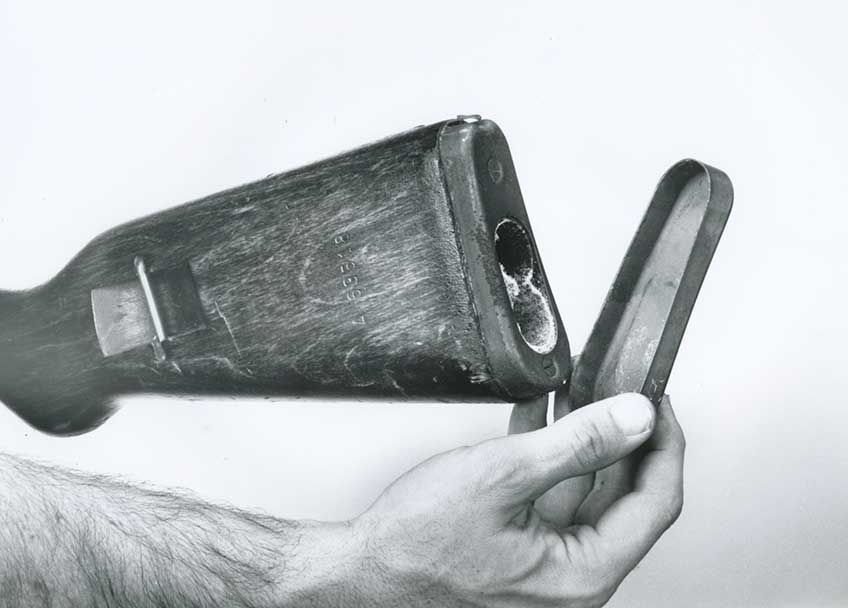 In their home country, they are now used only by ceremonial troops, in the same way the SKS-45 is used by the guards at Lenin’s tomb in Moscow. The Models 52 and 52/57 were well made and effective arms, but were obsolescent at the time of their introduction, a time when more modern arms like the AK-47 and FN FAL were moving from the drawing boards into the hands of troops.

In the United States, vz. 52s have appeared occasionally among surplus retailers, most notably coming through Century Arms International in the mid-1990s. Royal Tiger Imports has imported the most recent batch of vz. 52s, which were discovered in storage in Ethiopia. You can read about the discovery here.