February 6, 2023 Guns In The News
Home»Politics»Trump Admin Considering Using Your Apple Watch, Amazon Echo, & Google Home Data To Violate Your Right To Own A Gun
Politics/Video

Trump Admin Considering Using Your Apple Watch, Amazon Echo, & Google Home Data To Violate Your Right To Own A Gun

Here again, we see the Trump administration treading into waters that neither it nor Congress is authorized to be in.  Yet, here they are talking about links between mental health and violent behavior, and they want to use your own technological electronics against you.  In fact, among the devices considered to be taken advantage of by the Trump administration to determine who is mentally fit enough to own a gun, among many other things, are Apple watches

Interestingly enough, the story comes by way of the CIA-Amazon

The White House has been briefed on a proposal to develop a way to identify early signs of changes in people with mental illness that could lead to violent behavior.

Supporters see the plan as a way President Trump could move the ball forward on gun control following recent mass shootings as efforts seem to be flagging to impose harsher restrictions such as background checks on gun purchases.

By the way, those of us who support the Constitution no matter what the political jersey is being worn by anyone in DC know for a fact that this will be used to target individuals and usurp their rights that are to be protected under the Constitution and not just the Second Amendment, but the First, the Fourth and the Fifth.

Just how dangerous is this?  Consider the model the Trump administration is seeking to build upon:  DARPA.

The proposal is part of a larger initiative to establish a new agency called the Health Advanced Research Projects Agency or HARPA, which would sit inside the Health and Human Services Department. Its director would be appointed by the president, and the agency would have a separate budget, according to three people with knowledge of conversations around the plan.

HARPA would be modeled on DARPA, the highly successful Defense Advanced Research Projects Agency that serves as the research arm of the Pentagon and collaborates with other federal agencies, the private sector and academia.

The concept was advanced by the Suzanne Wright Foundation and first discussed by officials on the Domestic Policy Council and senior White House staffers in June 2017. But the idea has gained momentum in the wake of the latest mass shootings that killed 31 people in one weekend in El Paso and Dayton, Ohio.

The Suzanne Wright Foundation re-approached the administration last week and proposed that HARPA include a “Safe Home” — “Stopping Aberrant Fatal Events by Helping Overcome Mental Extremes” — project. Officials discussed the proposal at the White House last week, said two people familiar with the discussions. These people and others spoke on the condition of anonymity because of the sensitivity of the conversations.

The attempt to use volunteer data to identify “neurobehavioral signs” of “someone headed toward a violent explosive act” would be a four-year project costing an estimated $40 million to $60 million, according to Geoffrey Ling, the lead scientific adviser on HARPA and a founding director of DARPA’s Biological Technologies Office.

“Everybody would be a volunteer,” Ling said in an interview. “We’re not inventing new science here. We’re analyzing it so we can develop new approaches.

“This is going to have to be done using scientific rigor,” he said.

No, it’s going to be done in violation of the Constitution.  Where did the people authorize that money to be spent in this fashion?  Please, anyone, cite Article, Section and Clause.  You can’t do it because it doesn’t exist.

By the way, DARPA was recently in the news.

Furthermore, no one is going to be a volunteer.  Everybody and anybody paying attention know that they will just pull it at will.

This will not be pursued with scientific rigor either.  This is going to be the same government that has told us they have been engaged in mind control and psycho-electric studies of humans.  You don’t think they are behind some of the shootings that are going on?  Remember, the El Paso shooting?  The FBI knew all about the guy and knew his intentions and did nothing.  Bigger and more funded government will only be worse.

“Every time this has been brought up inside the White House — even up to the presidential level, it’s been very well-received,” a person familiar with discussions said. “HARPA is the health-care equivalent of DARPA, and it’s a great legacy project for the president, one he is uniquely positioned to get done.”

Trump said mentally ill people are responsible for the uptick in mass shootings. “I do want people to remember the words ‘mental illness.’ These people are mentally ill. … I think we have to start building institutions again because, you know, if you look at the ’60s and ’70s, so many of these institutions were closed,” he said on Aug. 15. The president has also floated the possibility of supporting background checks.

The worst part is that Wright believes that Ivanka Trump, of all people, is best to champion this proposal.  Look, Ms. Trump is a polite woman, no doubt, and this is not an attack on her, but plain and simple, she is a very liberal-minded individual.  Of course, they want her to be the face of this thing.

However, this goes deeper than what is being said here.  WaPo adds:

The document goes on to list a number of widely used technologies it suggests could be employed to help collect data, including Apple Watches, Fitbits, Amazon Echo and Google Home. The document also mentions “powerful tools” collected by health-care provides like fMRIs, tractography and image analysis.

“Advanced analytical tools based on artificial intelligence and machine learning are rapidly improving and must be applied to the data,” states the document.

Those familiar with the project stressed it would not collect sensitive health data about individuals without their permission. The government is simply trying to identify risk factors when it comes to mental health that could indicate violent behavior, they said.

“Privacy must be safeguarded. Profiling must be avoided. Data protection capabilities will be the cornerstone of this effort.”

Here again, when government gets involved in things where they overstep their constitutional bounds, no one is safe and no one is protected.  This will be a vast unconstitutional data mine; and they will use these means to listen in on you, track you and use any and all information they pick up on your to attack you and your rights.  They’ve already demonstrated this in the Oregon trials and a massive Facebook data dump without a warrant and the use of a CIA-funded front group and Palantir.

“DARPA is a brilliant model that works. They have developed the most transformational capabilities in the world for national security,” said Liz Feld, the president of the Suzanne Wright Foundation, saying those techniques had yet to be applied to health care. “We’re not leveraging the tools and technologies available to us to improve and save lives.”

Not so fast there, missy.

DARPA Can Exterminate Humanity: “You could Feasibly Wipe Out The Human Race”

New Weapons to Fight “Online Extremists” Rolled Out by DARPA – Guess Who They Will Target?

DARPA Creepiest Programs For Human Control: “How Dark Will Our Future Be?”

This isn’t about saving lives or they would be correcting the FBI, wouldn’t they?  But they aren’t.  This is about control… and you, America, are the guinea pig.

America's Red Flag Warning: Take Responsibility for Ourselves or the Government Will Do It For Us

Banning Movement Of Guns Across State Lines? Read the Commerce Clause In The Light Cast By The Other Parts Of Our Constitution

No Gavin Newsom, The 2nd Amendment Was For Protecting “Weapons Of War”! (Video)

Trump Admin Considering Using Your Apple Watch, Amazon Echo, & Google Home Data To Violate Your Right To Own A Gun 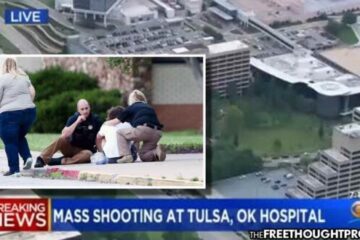