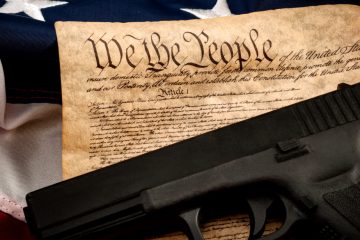 May 27, 2022 Tim Brown
Home»Politics»Trump Tells NRA, ‘The Left is Coming for Your Guns’ As He’s Been Quietly Taking Your Guns All Along
Politics/Video

Indianapolis, IN — On Friday, President Donald Trump vowed to fight for the Second Amendment rights of Americans as he spoke to members of the National Rifle Association. While Trump claimed to be a champion of gun rights, however, his record says something entirely different.

During the speech, Trump claimed that the “left is coming for your guns,” and he’s correct. But so is the right, and so is Trump.

In reality, this president is just like the president before him in regards to removing your rights to protect yourself and your family. Sadly, however, people still buy into the ridiculous rhetoric used to stoke divide.

Indeed, we can see that toward the end of his speech, we hear what Trump’s rhetoric was really about — getting people out to vote for Republicans — using fear.

“You better get out there and vote,” the gun grabber in chief said of the 2020 election, “It seems like it’s a long ways away. It’s not.”

Just as Trump fear mongered about the left “taking our guns” in his speech, Americans don’t even realize that this is actually what’s happening on the right. In just the first six months after the shooting in Parkland and the president’s statement of “take the guns first,” the Giffords Law Center to Prevent Gun Violence recorded a whopping 55 new bipartisan gun control measures in 26 states. That number is now far greater as states pass “red flag” gun laws to literally do what Trump advocated for in Feb. 2018. They are taking the guns first and seeking due process second.

Colorado just became the 15th state to pass such a law and now, Colorado citizens will be subject to laws which allow their guns to be seized without them having any say in it whatsoever.

Citizens who are targeted by the law are deemed guilty first and only after their guns are taken, will they have a chance to defend themselves in court. This is the de facto removal of due process — just like what the NRA-praising Trump advocated for.

This move to push for gun control, however, should come as no surprise. As TFTP reported in December 2017, in an example of how both parties are willing to completely compromise their ostensible principals to further the agenda of usurping your rights, the Republican-controlled house voted to federalize gun laws across the country.

Not only was this bill—which makes it easier for the federal government to disarm the citizens—voted for by the alleged pro-2nd Amendment Republicans but it was also supported by the NRA.

There are more government-growing, unconstitutional, anti-liberty pieces of legislation moving through the House this month than in any month I can remember.

Sadly, this is the mission of the current commander in chief. Tis a sad state of affairs when red and blue lines can cloud the minds of those who wish to protect themselves and their families with adequate weaponry, all the while surrendering that ability to the first person who wears their color and whispers in their two-party conditioned ear.