Last year, Walther Arms launched the Q5 Match series of 9 mm Luger pistols. The polymer-frame version, simply called the Q5 Match, was designed to meet customer requests for a tricked-out competition gun based on the duty-size PPQ pistol. The comfortable grip frame was left unaltered, but the slide was lengthened to accommodate a 5″ barrel, made optics-ready, beveled, vented and finished off with a set of fiber-optic target sights. It was the competition-ready PPQ that folks had been waiting for.

At the same time, the company didn’t want to disregard those who prefer the weightier heft and balance of an all-steel pistol. The other model in the series, the Q5 Match Steel Frame (SF), combines the souped-up, PPQ-pattern 5″-barrel competition slide assembly with a machined steel frame. It is outfitted with a wraparound polymer grip and removable aluminum magazine well extension. The result was a recoil-taming target 9 mm that employed the same double-stack magazines and control configuration as the polymer-frame PPQ.

As is often the case when new models hit the market, the Q5 Match SF inspired a fresh set of customer requests. These shooting enthusiasts were hoping that the company would use the heavier steel frame as the foundation for a trimmed down, duty-size pistol outfitted with a 4″ barrel and PPQ slide. Such a gun would offer the same balance and control as the steel Match version while sporting a slide length and feature set suitable for law enforcement personnel, civilian concealed carry and home defense. And in response to these requests, the company has released the Q4 Steel Frame for 2020. Available in optics-ready or iron-sights-only configurations, this review takes a closer look at the iron-sight-only version.

The Q4 SF is a double-action-only, striker-fired semi-automatic with a Browning-type tilting barrel. Like the Walther Q5 Match series, the Q4’s PPQ lineage is clearly evident in the contours of the slide, the configuration of the controls and its fire-control system. The PPQ-style carbon steel slide has a durable, matte-black Tenifer finish. The barrel, internal components and carbon steel frame are also treated with Tenifer for improved  resistance to wear and corrosion.

Employing the same Browning-style action used by the PPQ but with a steel frame, the Walther Q4 SF features bilateral slide stop levers, a reversible magazine release button and a one-piece polymer grip (r.) that wraps around both sides and the rear of the pistol’s frame.

The 7.4″-long, PPQ-style slide features front and rear cocking serrations. The weight-reduction cuts of the Q5 Match series are absent. The pistol I worked with was topped with a set of luminescent, low-profile, three-dot combat sights. The large white dots of the front and rear sights contain a phosphorescent compound that glows softly when exposed to ambient light or brightly when briefly “charged” with a tactical flashlight. The rear sight is drift-adjustable for windage.

The slide’s topstrap is grooved to reduce glare, and the ejection port has been beveled for improved clearance. The dimpled slide plate is metal instead of the more common polymer type found on the majority of striker-fired pistols. When there is no round in the chamber, the 2″-long extractor arm recessed into the right side of the slide rests flush with the rear cocking serrations. Once a round is chambered, the back end of the extractor dips into its slide, exposing a red dot, which provides both a tactile and visible loaded-chamber indicator.

Removing the slide reveals a 4″ barrel with six grooves of 1:10″-twist right-hand rifling. Unlike the polygonal rifling favored by some manufacturers, a traditional land-and-groove configuration is well-suited to all pistol bullet types—including the less expensive cast lead bullets preferred by competitors looking to reduce their ammunition costs. The steel guide rod features a single captured, flat-wire spring.

The Q4 SF is one of those rare production guns in which the designers paid close attention to all of the frame’s touch points. Anywhere the operator’s hands come into contact with the steel, that surface has been thoughtfully smoothed out or treated with a just-right amount of texturing for positive purchase. The result is a frame that feels as good as it looks.

The steel frame is stamped “Carl Walther ULM/DO. Germany” on the left side with the serial number applied to the barrel and slide as well as the frame. The dustcover is milled with a 1.4″-long, three-slot Picatinny accessory rail for mounting light or laser modules. The metallic takedown lever is on the left side of the frame along with the oversized round magazine release, which is reversible for right- or left-hand operation. The bilateral slide stop levers are recessed into the frame for a no-snag profile; their extended length and textured surface make them easy to reach and operate. 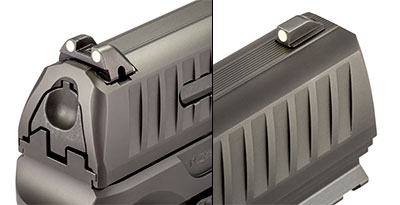 The Walther Q4 Steel Frame’s low-profile, three-dot sights contain a phosphorescent compound that glows softly when exposed to ambient light or brightly when briefly “charged” with a tactical flashlight. The rear sight is drift-adjustable for windage.

The front of the roomy trigger guard is flattened, and it is treated to the same fine-line checkering as is the frontstrap of the frame to form a finger rest for the support hand. Where it meets the frame, the trigger guard is undercut for added comfort. The portion of the frame directly behind the polymer Quick Defense (QD) trigger is contoured for easier access to the trigger and magazine release button.

The QD trigger has an integral safety lever with a feel that is much better than the typically mushy and somewhat gritty triggers found in many of today’s polymer striker-fired guns. Featuring a short, 0.4″ arc of travel with a 0.1″ trigger reset, the trigger pull for this particular pistol was 5 lbs., 5 ozs., which is 4 ozs. lighter than the listed weight. When the trigger reaches its reset point, it gives an audible and tactile click that’s easy to recognize for quick follow-up shots.

Although the grip frame’s contours are inspired by the PPQ, this pistol does not have the interchangeable backstraps of the polymer models. The one-piece polymer grip wraps around three sides of the frame and is secured in place by four hex-head screws. Walther’s Performance Grip texturing provides plenty of purchase without being overly aggressive. The Q4 SF’s beavertail grip extension, which protects the shooting hand from slide bite, has been shortened and rounded to fit law enforcement-type holsters that use retention hoods, and to make the pistol more comfortable for concealed carry.

Weighing in at 39.7 ozs. with an empty magazine, the Q4 SF is shipped with two blued-steel PPQ 15-round magazines that have red polymer followers and flush-fit baseplates. This gun also accepts magazines outfitted with plus-two base extensions. It should be noted that the Q4 SF does not have a magazine disconnect safety; this means the pistol will fire with the magazine removed.

The Q4 SF is easily disassembled for cleaning and routine maintenance. With the pistol pointed in a safe direction, remove the magazine and verify the pistol is completely unloaded. With the slide locked in the open position, rotate the takedown lever clockwise from the 9-o’clock position to the 1-o’clock position. While holding the slide, depress the slide stop and then ease it forward into the closed position. Fully depress the trigger and release it completely. The slide assembly can then be slid forward off of the frame. Lift the recoil assembly out of the slide followed by the barrel. The pistol is ready to clean. Reassembly is conducted in reverse order without any tricky or unexpected steps required.

It’s not uncommon for a brand-new, all-steel pistol to need a break-in period of 50 to 200 rounds. This smooths the contact points between the slide and frame so that the pistol will run reliably. Having broken-in a few steel pistols along the way in this manner, I was prepared to give the Q4 SF an extended workout before settling down into the accuracy testing. However, no break-in was required with this gun. The Q4 fed, fired and ejected reliably with no malfunctions from the first shot fired through the entire testing process with a mix of practice-grade and premium ammunition. The slide cycled smoothly right out of the box and demonstrated clean fitting to the frame. The controls operated properly, and the magazines dropped free of the grip when the magazine release was pressed.

But shooting from a bench rest has its limitations. It’s helpful for the purpose of evaluating accuracy, but it gets in the way of finding out how the pistol will handle in more typical shooting situations. Getting off the bench allowed this pistol to show off its excellent balance. From a standing position with a two-handed hold, the pistol was fired both quickly and slowly in various drills. It’s not enough to just make a target pistol heavier in order to improve its handling characteristics; the extra weight needs to be carefully distributed throughout the frame. Walther made sure this was the case with the Q4 SF’s frame design. Paired with top-notch grip geometry, this pistol significantly reduces felt recoil for more satisfying group sizes downrange. 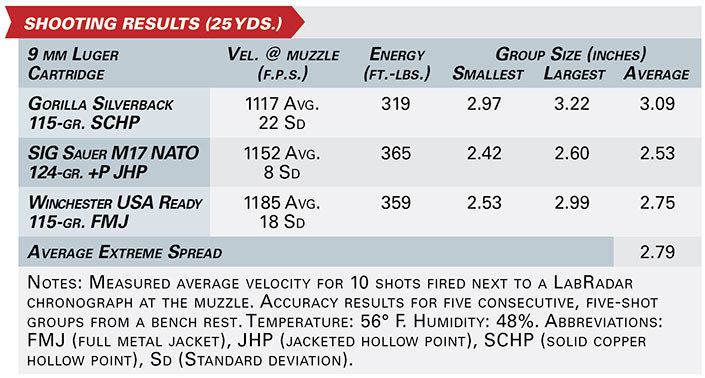 In regards to accuracy, the Q4 SF fared quite well. When I’m shooting a well-made semi-automatic using the iron sights, 3″ or so at 25 yds. typically demonstrates that the gun and I are both doing our part. The Q4 SF performed better than that with group sizes hovering between 2.5″ and 3″.

The Walther Q4 Steel Frame is a handsomely crafted pistol that successfully blends an old-school frame material with thoroughly modern features for a flexible platform capable of filling multiple roles. The company’s many years of high-quality pistol production, including internationally recognized competition-grade firearms, is clearly demonstrated in this model.

I appreciate the fact that Walther is willing to accommodate those of us who prefer the level of control that a well-made, all-steel pistol provides. Despite their many other positive attributes, polymer-frame guns just don’t have the same feel or balance. The use of so much carbon steel in a 21st century handgun may seem like an antiquated approach to some shooting enthusiasts, but, in the end, shot placement is king, and the Q4 SF is a terrific reminder that steel frames still have a place in the handgun market. 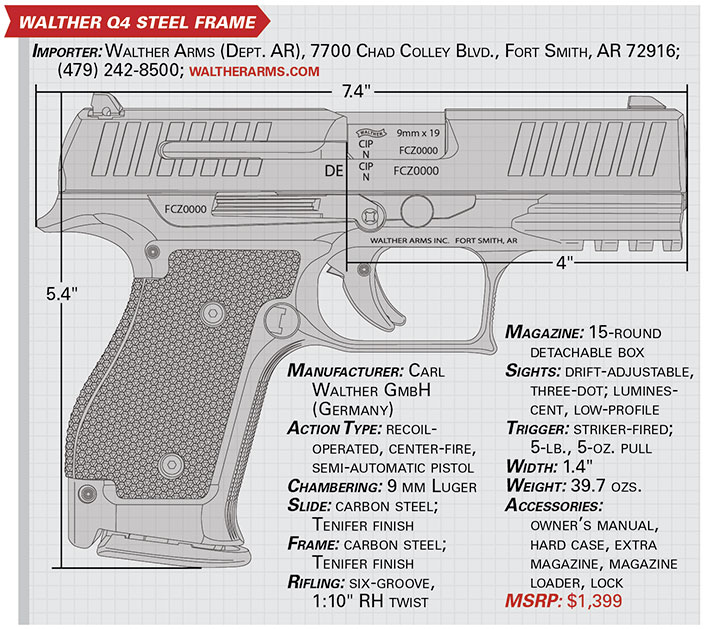 How to Solve Rifle Accuracy Woes