In 1945, when Weatherby’s, Inc., began offering rifles, the action that was to become the flagship of the line wasn’t even the proverbial gleam in founder Roy Weatherby’s eye. Early Weatherbys were generally built on FN Mauser, Schultz & Larsen or Mathieu actions. All that changed in 1954 when Weatherby, in collaboration with his new chief engineer, Fred Jennie, began development of the Mark V action.

Roy Weatherby identified a number of features he wanted in his new action, including short bolt lift, a full-diameter bolt, and the ability to handle the large-diameter .378 and .460 Weatherby Magnum cartridges. The solution was a massive action with a cylindrical receiver having an integral recoil lug, which held a large, one-piece, full-diameter bolt with nine compact lugs, a protruding bolt nose, a spring-powered pivoting extractor and a plunger ejector. The arrangement of three equally spaced banks of three lugs gave a short 56 degree bolt rotation, and the fat bolt with shallow lugs permitted thick receiver ring walls and eliminated the need for locking lug raceways. Other features were a distinctively styled bolt sleeve, a simple two-lever override trigger that also served as a bolt stop, and a sear-blocking safety mounted on the trigger housing.

By 1958, prototypes had been tested and patent applications that covered the action and safety mechanism were filed. Initially, the new action components were investment-cast in San Francisco by Precision Founders, Inc., and assembled at company headquarters in South Gate, Calif. Soon thereafter, in 1959, a second production line was established in Eckernforde, Germany, with J.P. Sauer & Sohn making forged action components and barrels. After only a few thousand actions were assembled from California-made components, production there ceased and all subsequent actions were made by Sauer. Initial Mark V chamberings included the .257, .270, 7 mm, .300, .375, .378 and .460 Wby. Mag. cartridges, plus a variety of popular American and European calibers.

Ironically, in 1962, Weatherby abandoned his patented safety design, in favor of a two-position mechanism mounted on the bolt sleeve that retracts the cocking piece off the sear and locks the bolt.

By the late 1960s economic factors prompted a change of manufacturer and, by 1971, the first Mark V actions came out of Japan from the Howa Machinery Company, Ltd., as Sauer production was phased out. Like the Sauer actions, the Howa models were forged, though the Japanese firm relied more on automated machining stations. Howa barrels were also hammer-forged like the Sauer guns.

Howa produced the Mark V through the end of 1994, when manufacture was brought home to Saco Defense of Maine. When Saco Defense was acquired by General Dynamics in 2000, however, the parent company chose to discontinue its commercial firearm production. Mark V production was transferred to a number of specialty production shops working to Weatherby specifications in 2003. Current-production Mark V actions are still forged and fitted with broach-rifled barrels. 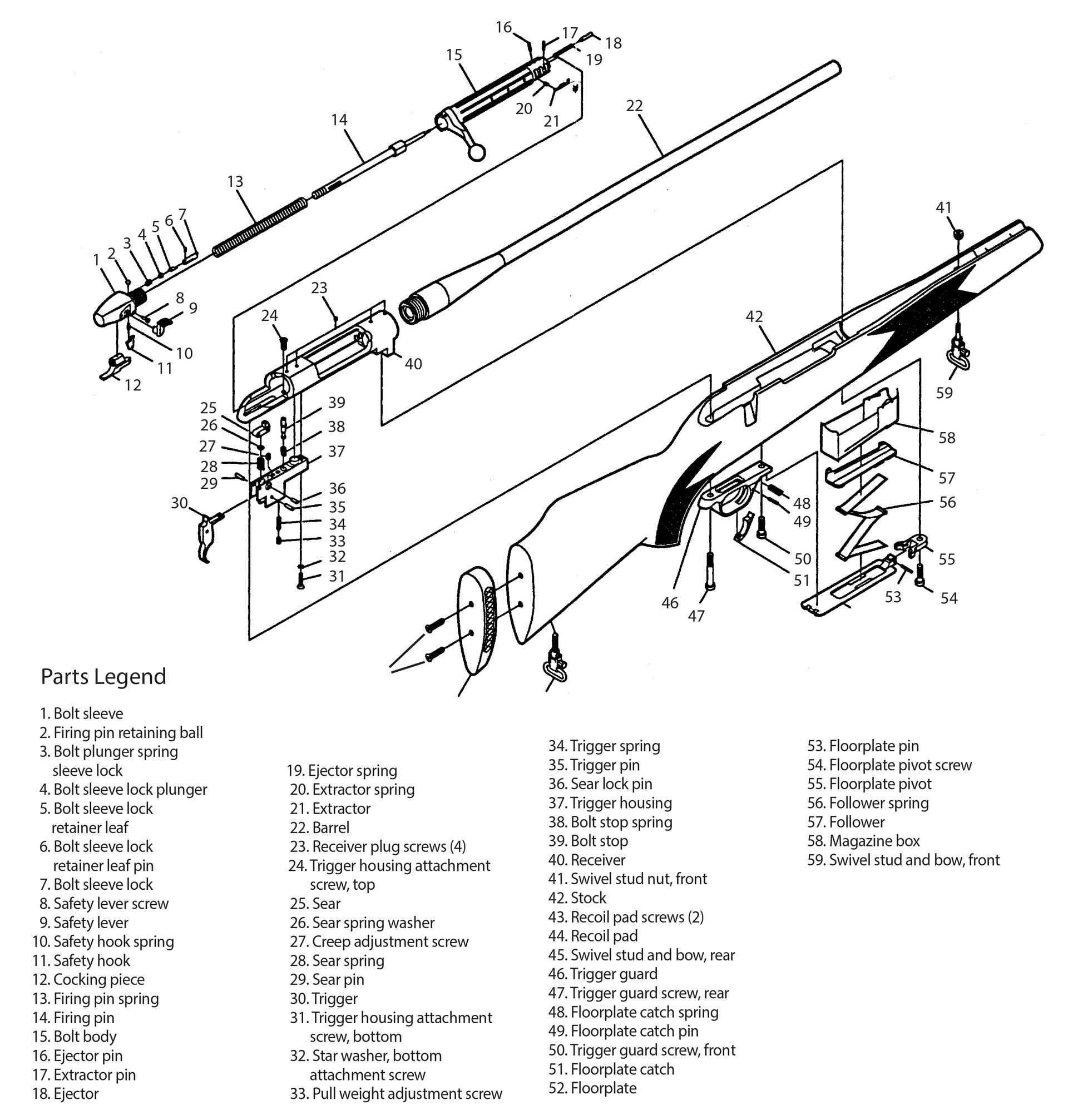 Retract the bolt to ensure that the action is unloaded and to remove any cartridge in the chamber. Push the floorplate catch (51) inside the bottom front of the trigger guard (46) to drop any remaining rounds out of the magazine box (58). 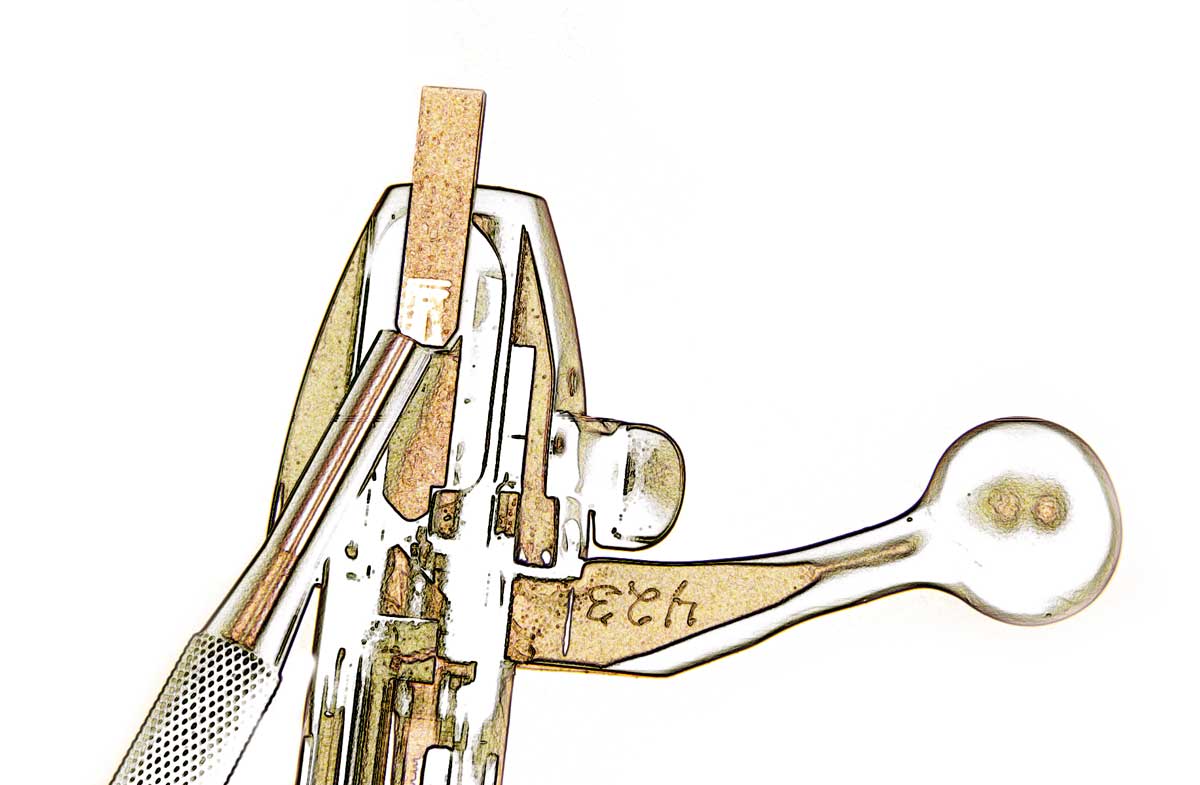 Remove the bolt assembly by withdrawing it rearward while pulling the trigger (30). To field-strip the bolt assembly, use a square-faced punch to push the cocking piece (12) rearward and rotate it onto its shoulder in the bolt sleeve (1) (Fig. 1). 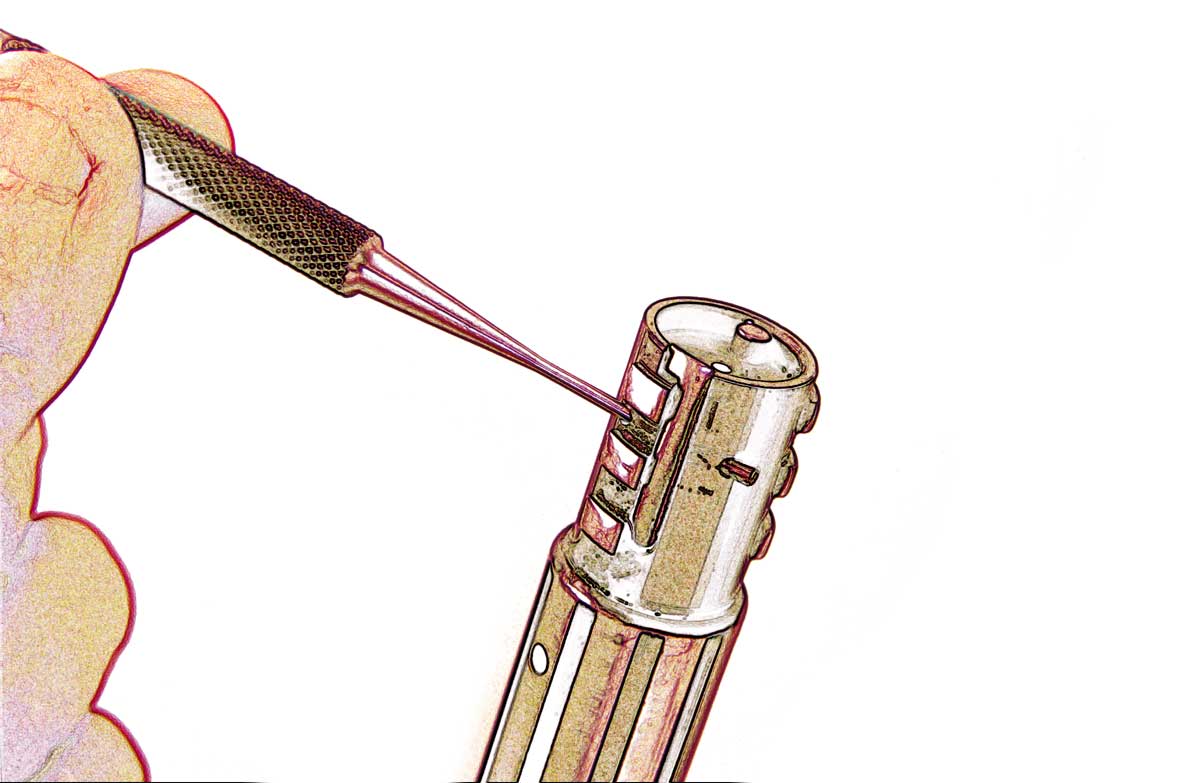 Use caution and eye protection as the firing pin spring is under considerable tension.

Using a screwdriver with a flat blade of the proper width and thickness, turn out the floorplate pivot screw (54) and rear trigger guard screw (47) to free the barreled action from the stock (42). The trigger guard, with the attached floorplate (52), follower spring (56) and follower (57), can also now be removed from the underside of the stock. 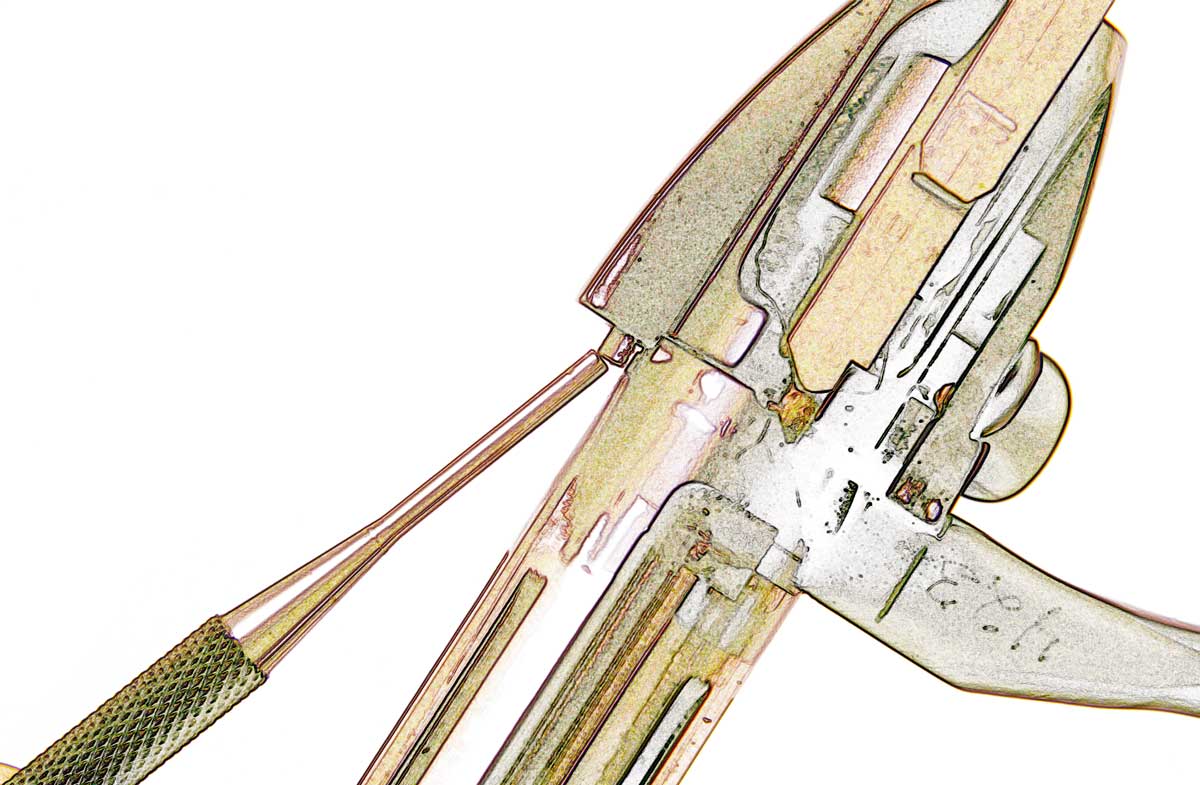 With the barreled action freed from the stock, remove the magazine box from the receiver. Using a hex wrench, turn out trigger housing attachment screw (24) to remove the trigger assembly from its recess in the receiver. No further disassembly of the firearm is recommended.

Reassembly is in the reverse order. Drive in the extractor and ejector pins so that they do not protrude above the bolt surface. Also, when reattaching the cocking piece and firing pin, ensure that the back end of the pin is flush with the rear of the cocking piece.