Some things are pretty safe bets. Taxes must be paid by April 15, birthdays come once a year, and Wilson Combat turns out good pistols. There are some exceptions. Congress might pass a law exempting themselves from having to pay taxes. If you were born on Feb. 29, your birthday only comes around once every four years. On the other hand, I’ve yet to be disappointed in a new Wilson pistol, and that includes the company’s latest offering—the Spec-Ops 9.

The Spec-Ops 9 is aimed directly at the concealed-carry market with two predominant characteristics driving the design: light weight and increased capacity. Light weight in today’s semi-automatic pistol market means a polymer frame, while increased capacity dictates double-stack magazines (for detailed photos of the gun and its components, visit its gallery). In a sense, those thicker magazines do not result in guns conducive to the “concealed” part of concealed carry because the grip frame must be wider than guns using single-stack magazines. Wilson’s approach to this problem is a polymer frame with stainless steel rails molded in place. The result is minimum bulk and weight (29.6 ounces empty, 7 ounces heavier fully loaded) with plenty of structural strength. The Spec-Ops magazine not only holds 16 rounds—satisfying the increased-capacity promise—but loading the magazine to full capacity without a special tool was easier for me than any other double-stack pistol I’ve tried. My thumb was most appreciative.

The slide is carbon steel with a 41⁄2-inch barrel, which to me is a good compromise length. You get almost as good a sight radius as with a 5-inch barrel (6.2 inches), while the balance point doesn’t move too far forward as is the tendency with polymer-framed guns equipped with longer barrels. There are serrations at the rear of the slide to facilitate cocking, but none near the muzzle. However, about an inch from the muzzle there is a small but noticeable reduction in slide width, creating a distinct shoulder I found to be very helpful in performing chamber checks, both visual and tactile. As always when grasping the slide near the front end, be careful that no part of your hand extends in front of the muzzle.

Sights are of the 3-dot tritium variety, making them highly visible in low-light conditions. On a recent trip where the Spec-Ops 9 became my nightstand gun, the glowing sights made it easy to find in the dark. These are Wilson’s new Tactical Combat Sights and are considerably less bulky than the sights on my Wilson CQB 1911, the primary gun on my California concealed-carry permit. The front sight blade is almost the same width and height as on my CQB, but instead of being fit into a laterally cut dovetail slot, it slides into the front of a longitudinally cut dovetail slot. The rear sight is considerably smaller than on my CQB and is screwed into a recessed cut in the slide rather than slid into a dovetail. One similar feature on both rear sights is the concave rear surfaces to eliminate any possible glare or light reflections. Nice touch. The Spec-Ops hammer is Wilson’s new ultra-light, compact design and resembles a commander-style hammer with the top and bottom “pinched” together. The Spec-Ops features a single, hand-fitted lug barrel.

The polymer frame has Wilson’s distinctive starburst grips, a feature I fell in love with while evaluating an earlier gun. Both frontstraps and backstraps have checkering molded into the polymer. The grip safety is the compact-carry design, which closely resembles the grip safety on my CQB except that the beavertail doesn’t sweep as high on the new 9 mm. Wilson’s extended tactical model thumb safety is slightly smaller and shorter than that on my CQB, but is easily, naturally and reliably operated by my thumb in the act of presenting the gun. I would describe it as being as small as it can be, and no bigger than it needs to be—a great combination on a gun intended for concealed carry.

The magazine release is slightly larger in surface area than the one on my CQB, but it doesn’t protrude as far from the frame. My fingers are relatively short, so I have to shift my grip to hit the release on single-stack 1911s as well as the Spec-Ops 9. Recog-nizing that as a strictly personal limitation, the Spec-Ops magazines released cleanly and dropped from the gun on every touch, whether or not there were rounds in the magazine. Likewise, those inserted quickly and cleanly into the gun due largely to the flared mag well molded into the grip frame.

The distinctive look of the gun comes from the shape of the trigger guard with its sharp corner, as opposed to the more common rounded guard on steel and alloy guns. It seems almost a throwback to some of the designs of yesteryear, but it may simply be an easier shape to mold. I had no problem shooting the gun since my grip doesn’t involve the front of the trigger guard, but a couple of custom 1911 holsters would not allow the 9 mm full entry due primarily, I think, to the bulkier trigger guard. Fortunately, one of my favorite factory holsters is Galco’s Avenger, and it eagerly accepted the Spec-Ops 9 like an old friend.

Internally, the Spec-Ops 9 has the features we’ve come to expect from Wilson Combat. Its barrel has a polished feed ramp, and the polished extractor is precisely fitted. The gun has an extended ejector, the Wilson custom three-hole trigger, an extra-power firing pin spring and a heavy-duty recoil spring. There are actually five holes in the trigger, but only the three large holes are there to reduce weight. Two tiny holes allow mounting of the trigger bow to the trigger.

There was no pretense of being gentle or babying the gun when I got the Spec-Ops 9 out for a shooting session. I had a mixture of ammo, including some various-weight cast-bullet handloads that have been in my garage for more than 20 years. I literally jammed a mixture of factory ammo and handloads with jacketed and cast bullets indiscriminately into the magazines and started blazing away. Targets were paper plates at 10 yards, and every load with every weight, style and shape of bullet chambered, fired and stayed in those plates, even when I hit the throttle. The gun gobbled up everything I fed it. When I concentrated, I could feel the variance in recoil between the different loads. Slowing down, I thought I could detect a slight difference in point of impact between the various loads, even at 10 yards, but the disparity was insignificant. The 147-grain jacketed hollow points went exactly where the sights pointed, while the 115-grain jacketed hollow points hit perhaps 1⁄2 inch lower.

Sight picture with Wilson’s new Tactical Combat sights was crisp and clearly in focus thanks in no small part to the “old guy cheater lens” in my DeCot shooting glasses. The paper plates are another way of cheating by ensuring a clean white background in front of your sights, thus enhancing your sight picture. And since the plates are round, they tend to provide a natural assist in pulling your groups toward the center. Just as the eye naturally centers an aperture or peep sight, the eye wants to find the center of the round plate. Having said all that, there was no discreet aiming point on the plates that might help a shooter produce smaller groups. Even shooting off hand, I felt the gun could live up to the Wilson claim of 11⁄2-inch groups at 25 yards (I actually saw one of the Wilson technicians do this test a few years back). But more importantly for a carry pistol, the Spec-Ops 9 put every single shot into the kill zone at fighting distances, even when I pushed things beyond my reliable speed and regardless of ammo selection.

Given my hand size and short fingers, I would prefer a slightly shorter trigger on the Spec-Ops 9. The wider grip frame stretched my hand just enough—more than a standard 1911—that I had trouble putting the pad of my finger on the trigger. As you know, changing your grip plays havoc with shot-to-shot recovery times, and despite the 9 mm’s low recoil, I found myself readjusting my grip more than once in the course of emptying a 16-round magazine. Admittedly, I’m notoriously sloppy about proper shot-to-shot recovery, and I get even more careless when shooting mild-mannered 9 mms. But, besides emphasizing my need to work on this deficiency, it stresses the importance of having a gun that fits your hand. For you, the Spec-Ops 9 may be a perfect fit, or as many small-handed shooters (including me) have found, one of Wilson’s narrower frame guns might better suit your needs.

All that said, the new Spec-Ops 9 is a gun I would find quite comfortable to carry exactly as it comes from Wilson, except I would purchase a couple of extra magazines. With two spare magazines and one in the gun, you’re hitting the streets only one round short of a full box of ammo—all of it ready to rock with only two lightning-fast reloads. That’s a lot of defensive firepower per ounce carried.

At a retail price of $1,995, the Spec-Ops 9 is delivered with two magazines and a Wilson carry bag. It’s not cheap, but good life insurance rarely is.

The Ultimate Handload for the .45 ACP 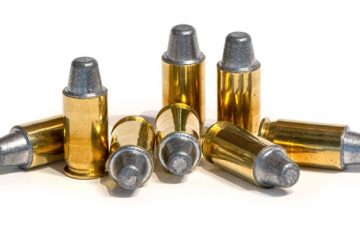