One rule of thumb in the shooting world is that bigger guns are easier to shoot but harder to conceal, whereas small guns are easy to conceal but more difficult to shoot. I’ve spent most of my shooting career in the big gun arena due to a penchant for handgun hunting, but as more and more states have acknowledged the validity of the second amendment and the need for personal self-defense, my attention has been captured by the importance of concealed carry. I’ve always been comforted by the presence of large calibers when afield, especially the .44 Magnum, but when one leaves America’s vast hunting areas and ventures back into civilization, how does one maintain some level of comfort with the idea of a .44 Magnum for concealed carry?

The first step is to reduce the size of the handgun such that it can remain concealed while wearing street clothes. Because it’s a .44 Magnum, there isn’t much you can do with the size of the frame. The power of the .44 requires a certain amount of surrounding metal for the gun to remain in one piece when firing magnum ammunition. You also need a minimum amount of weight to keep the felt recoil within your tolerance limits so you’re not afraid of pulling the trigger. The second step is to find a holster that allows you to carry the gun in relative comfort with reasonably rapid access without protruding through your outer garment. As it turns out, all these requirements for .44 Magnum concealed carry can be met with a couple of factory-produced handguns from S&W and Ruger and a pair of custom holsters from Rafter-L Combat Leather.

My Model 629 has the standard S&W features like stainless steel frame, barrel, and cylinder. While the barrel on this “N” frame .44 Magnum is only 3 inches long, it’s still a heavy handgun weighing around 40 ounces, and you’ll appreciate every ounce when you ignite a serious magnum load. The sights are Smith’s fixed red ramp front blade with a white outline adjustable rear sight. The grip frame is rounded and fitted with finger groove grip panels that have been dimpled for better control. Hammer spur is wide and checkered for single action shooting while the trigger is wide with a smooth surface for double action shooting, (what we called a “combat trigger” years ago.) These features combined allow me to shoot this gun one handed either single or double action, something I can’t do with square grip frame Smith’s wearing the old-style oversize wood grips.

Likewise, the Ruger is typical Super Blackhawk with everything being stainless steel except for the plain black front blade and adjustable rear sight. A wide hammer spur with lateral serrations insures no slippage when thumbing back the hammer for a rapid follow up shot. The barrel is 3.75 inches long with a full-length ejector rod housing. That’s about as short a barrel as you can get and still have the ejector rod push your fired cases reasonably clear of the cylinder’s breach face. The Ruger is slower to shoot and reload than the Smith, but for me the single action grip and 44 ounces tames recoil better. The Super Blackhawk and holster occupy more real estate on your hip than the 629, but with Eric Little’s purpose designed OWB holsters, both guns show the same amount of leather below the belt line, thus making them equally easy to conceal under an outer garment. 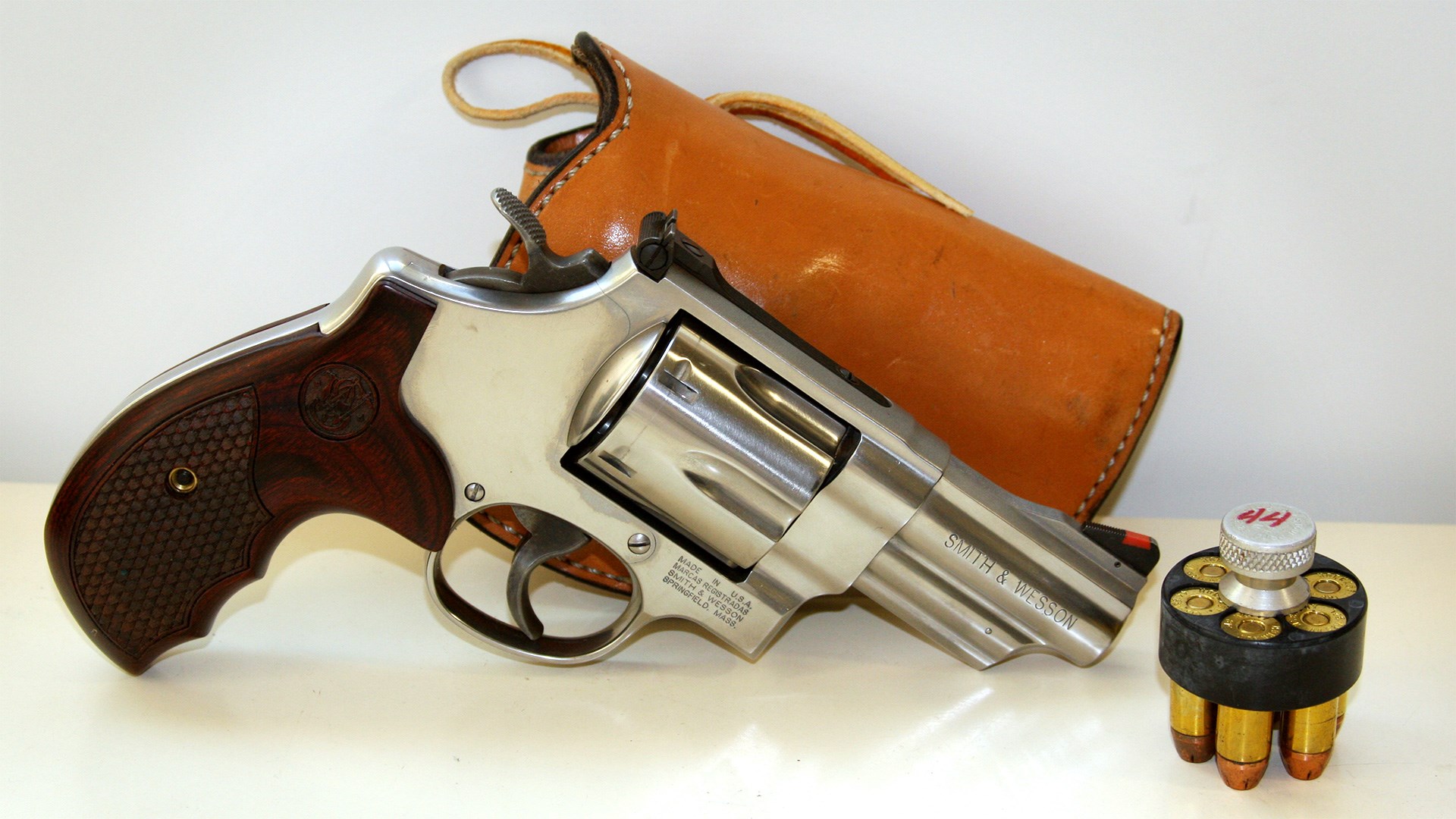 Holsters are made of smooth leather and form fitted to each gun. The smooth outer surface of the holster prevents it from catching the cover garment when you sweep it aside for the draw while the form fit insures the gun will remain stationary and not flop around when moving. The Rafter-L belt is sturdy enough to keep the gun close to the body but narrow enough to fit through the smaller belt loops normally found on “civilized” trousers as opposed to the wider “manly” loops normally found on jeans. If you hope to have any comfort carrying a .44 Magnum, a sturdy belt/holster rig is essential. I’ve worn this combination for 3-day shoots at Gunsite Academy and on all-day hog hunts in Texas.

I’m not suggesting that a .44 Magnum is the optimum CCW choice for everyone. Obviously if you share your habitat with big bears, the big bore pistol has a certain appeal. But, when leaving one of Gunsite’s ranges at the end of a day’s shoot or venturing through town after a Texas hunt, I rarely feel like performing a firearm wardrobe change. While you might be considered overgunned for the urban life, you’re never undergunned when wearing “the most powerful handgun in the world!” There are a couple of other advantages when you enter a vehicle or the world of vehicles. Those 3- and 3.75-inch barrels ride quite comfortably when seated, especially when trapped in a seat belt. Likewise, should you be threatened by some moron who thinks he can use a vehicle for cover, your .44 Magnum has the power to dramatically change his thinking about “cover” vs. “concealment!”

Don’t let my comments about ferocious recoil curb your potential enthusiasm. There is a great selection of .44 Special ammo being produced by the industry that will fill almost all your needs from popping pine cones to busting big bears. Well, maybe medium bears! Determining your level of recoil tolerance is a personal judgement that can only be made by you and can affect your decision to follow the path of .44 Magnum concealed carry..