For 100 years Easton Archery has been producing what many archers consider to be the finest arrow shafts on earth. It all started with young Doug Easton, who was born in 1907 with an inquiring mind and the instincts of a born engineer.

In his mid-teens and while convalescing from a terrible leg injury, Doug read a book written by one of our most influential modern-day archery pioneers, Saxton Pope. The book kindled what would become a lifelong passion for all things archery. Easton became so interested in archery that at the early age of 16 he moved to San Francisco, Calif., a town with a large and enthusiastic community of archers. One day at Golden Gate Park he was sending arrows downrange when a distinguished-looking gentleman complimented him on his skill and on the craftsmanship of his self-made bow and wooden arrows. Doug thanked him and gave credit to Dr. Saxton Pope’s well-written designs and instructions in his book. Much to Easton’s surprise and delight the gentleman then introduced himself as none other than Saxton Pope. 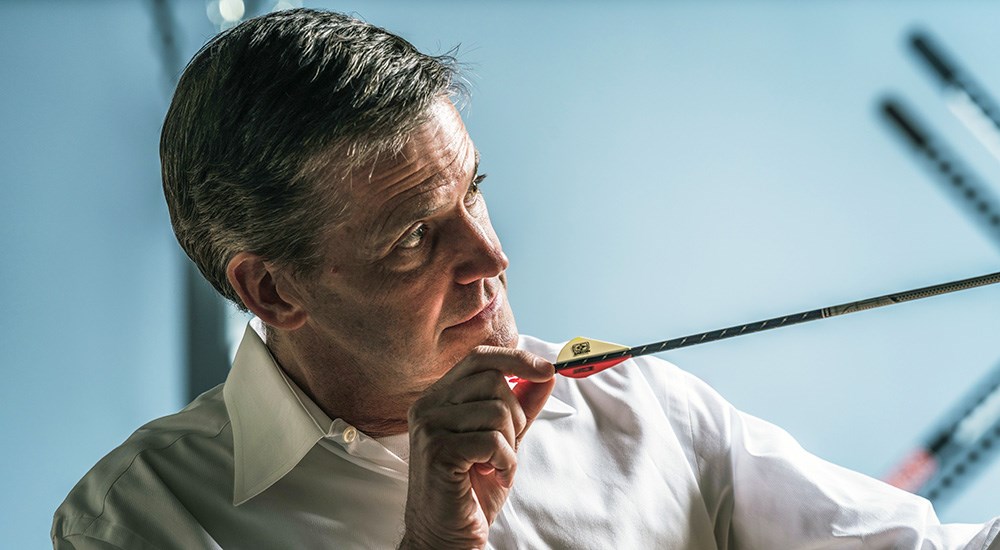 Within a very short time Easton’s handcrafted wooden arrows earned a reputation as some of the finest and most accurate arrows available, and were sought after and used by many of the serious tournament archers of the day. In a quest to develop even better, more consistent arrows, Doug designed and began production of the first “Footed” arrows, a technique where he meticulously dovetailed a section of hardwood material into the front end of cedar shafts. This improved the consistency, strength and front-of-center attributes of his arrows. If you’re unfamiliar with how these arrows looked, think of a pool cue, with its beautifully dovetailed handle section. Easton’s arrows had a similar dovetailed section at the fore-end of the arrow. But these arrows were incredibly labor-intensive to handcraft, and Doug continued his quest to design an even better, more consistent arrow.

In 1939, after more than a decade and a half of building some of the finest wooden bows and arrows available, Doug designed and produced the first Easton aluminum arrows. Two years later, in 1941, an archer named Larry Hughes won the national championships with Doug’s aluminum arrows, creating a firestorm of interest in the new shafts. They were so much more consistent than wood that there was even talk of declaring them illegal for competition. Thankfully, that didn’t happen. 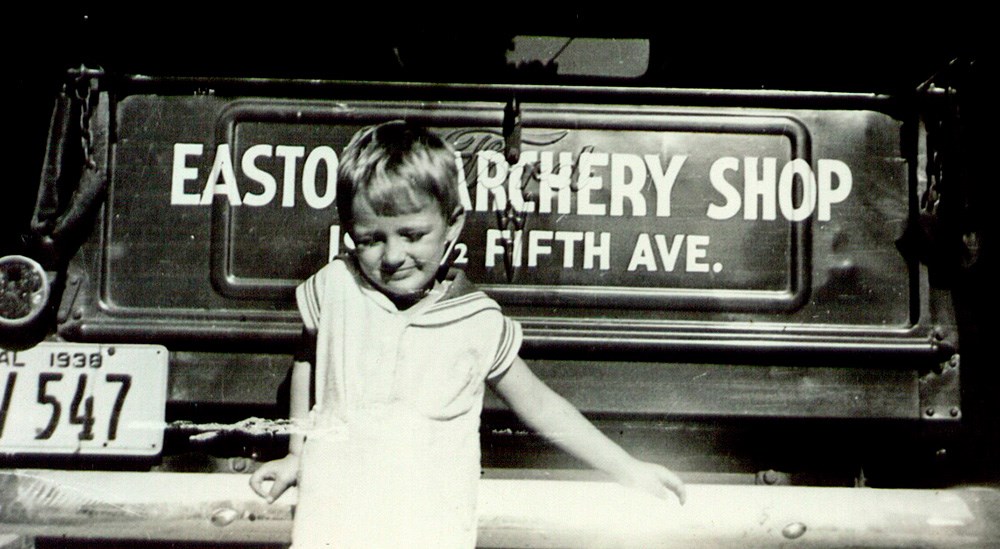 In the 1920s Doug Easton built wooden bows and arrows in his garage. The 1930s saw him move his shop to a 50×60-foot metal building in downtown Los Angeles. In the early 1940s he added a new factory with a 3,500-square-foot showroom. The 1950s saw another new factory open in Van Nuys, Calif., which expanded by 7,500 square feet in the 1960s. Doug’s son Jim joined him in the business, and Easton Archery continued to thrive.

The mid-’60s saw a new 58,000-square-foot facility open in Van Nuys. Construction took a break in the 1970s, but the family added a new corporate headquarters in the ’80s and expanded to Salt Lake City, Utah, with a 100,000-square-foot arrow-building factory. In the 1990s, Easton Composites found a home in San Diego, Calif., focusing on A/C (Aluminum/Carbon) and carbon arrows. Eventually, all arrow building was moved to the Salt Lake City factory. Innovation and expansion continued, and Easton Archery is still thriving today, 100 years after Doug Easton began building tournament-quality wooden arrows in his garage. 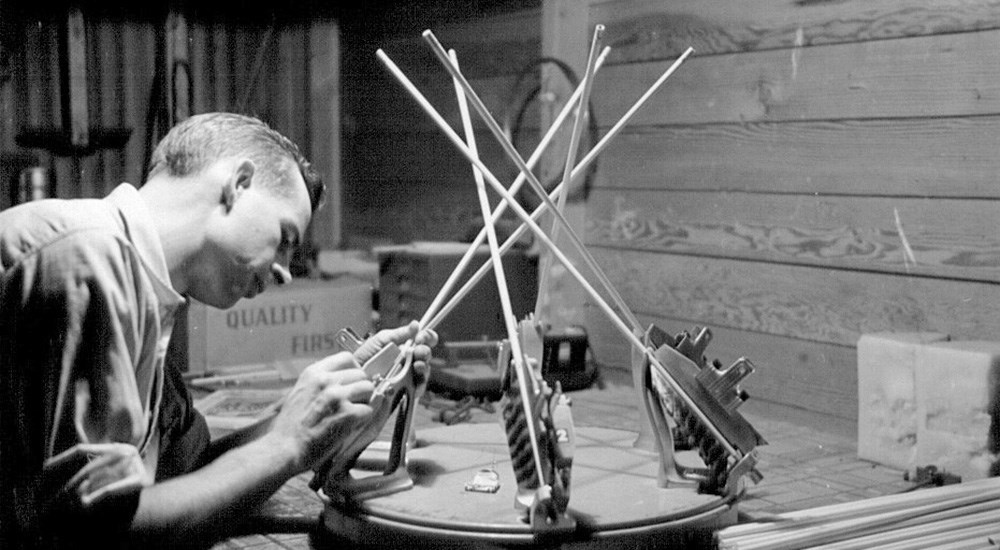 In my own youth, I was fascinated with traditional archery. I built wooden arrows by hand and managed to learn to shoot them fairly well. Then I bought my first dozen aluminum arrows: a set of 2219 XX78 Easton shafts. Wow, did they shoot! My first deer—a small whitetail buck shot at 26 yards—fell to one of those arrows. Those arrows were accurate and tough, and lasted forever.

Carbon arrows took the archery world by storm in the 1990s, led in large part by Easton’s A/C/C (Aluminum/Carbon/Competition) shafts. Some iteration of these shafts has taken home Olympic medals every year since. I stayed true to my aluminum shafts until Easton announced the new Axis, a small-diameter all-carbon arrow said to be very tough and deep penetrating—ideal for bowhunters. I fletched up a dozen shafts, tuned them to my longbow and fell in love. They were hands-down the toughest, most accurate, best penetrating shaft I’d ever used. To date I’ve used them to take mule deer, elk, whitetails, Hawaiian goat, wild bison and more, all with my faithful longbow.

Mid-2022 found me stalking up a lonely ridge high above a turquoise Hawaiian sea, hunting axis deer. My 13-year-old son, Josiah, was at my shoulder, a vintage recurve in hand. Nestled securely in his Selway quiver were five arrows—Easton, of course. Sporting a wood-grain finish and made especially for traditional archers, the Carbon Legacy shafts are accurate and eye-catching. 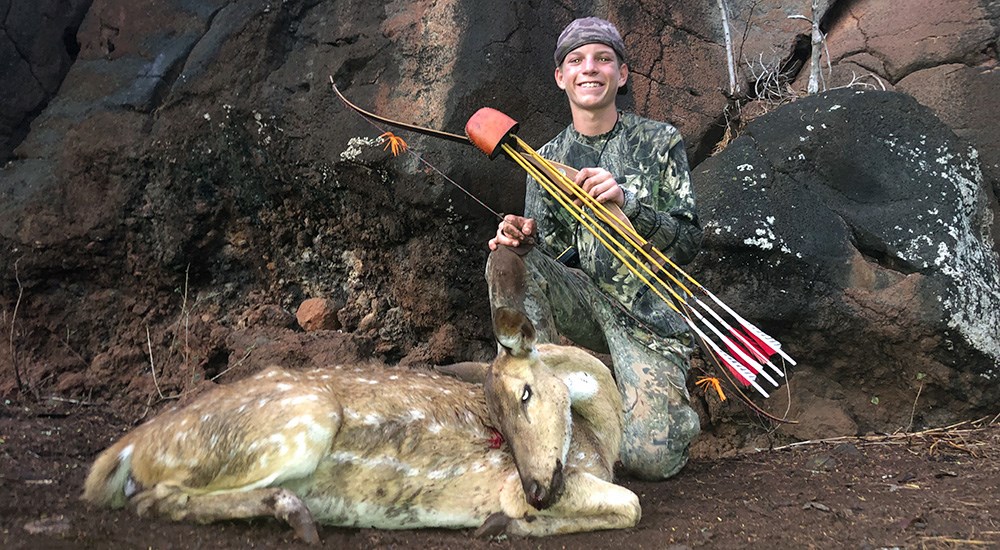 A light rain fell on us, speckling the red dirt and mixing with perspiration born of climbing a humid mountain. Through the boulders ahead of us I spotted movement, and we scooted carefully back and away from the trail. Josiah set up in a pocket of deadfall, arrow nocked and bow at the ready. A big boulder obscured our view of the trail. Silent moments passed, and I began to wonder if the deer had stopped or turned aside. Then Josiah drew his little recurve, holding steady on the edge of the boulder. An axis doe stepped into view, and I watched as the string dropped and the deer whirled away, disappearing into silence.

I looked at the trail where she’d stood, and there laid the arrow, mute evidence of a perfect shot. We followed the trail and found Josiah’s first-ever archery kill, taken cleanly. Quietly celebrating, we gave thanks. One hundred years after Doug built his first wooden shafts, another Easton arrow had flown true.