April 12, 2021 Guns In The News
Home»Commentary»A Right Delayed: Why We Can’t Give Government Discretion Over our Rights
Commentary

A Right Delayed: Why We Can’t Give Government Discretion Over our Rights

In 2020, as concerns over COVID-19 and violent unrest gripped the nation, Americans demonstrated unprecedented support for their right to keep and bear arms. The FBI conducted a record-setting 39.6 million National Instant Criminal Background Check System (NICS) checks in 2020. The 2020 number bested the previous record year (2019) by a massive 11.3 million NICS checks. Evidencing that this trend shows no sign of abating, December 2020 set the all-time monthly record for NICS checks with 3.9 million. The National Shooting Sports Foundation estimated that 8.4 million people purchased their first firearm in 2020.

Moreover, these remarkable figures fail to capture the full scale of Americans’ interest in these tools of self-defense.

For much of the year, firearms manufacturers, distributors, and dealers struggled to keep up with the demand for the most-popular firearms. Ripon, Calif., gun dealer Barnwood Arms told industry publication SHOT Business in October, “We are 25-deep in back-orders for SIG P365s and Glock 19s. That’s for each gun.”

In many locations, ammunition has been difficult to come by, with Americans buying up every round that manufacturers can produce. The shortage was so acute that, in December, President of Ammunition for Vista Outdoor (Federal, CCI, Speer and Remington) Jason Vanderbrink took to YouTube to assure gun owners that America’s ammunition manufacturers were operating at full capacity to serve the public. Addressing concerns about the popular .22 LR cartridge, Vanderbrink explained, “I hear lots of questions every day, ‘where’s the .22 LR ammunition?’… We are making more than we ever have. We just simply can’t keep up with the sharp increase in demand.” Speaking to the availability of 9 mm, Vanderbrink said, “we’re making this every minute of every day. We are simply making more than this factory has ever made.”

Limits on the availability of certain firearms and ammunition has acted as an unfortunate, but perfectly understandable, constraint on Americans’ ability to exercise their Second Amendment rights. However, there is another, insidious manner by which the public’s growing interest in self-defense has been restrained. Government officials used COVID-19 and the summer’s violent unrest to erect further barriers to gun ownership with the aid of pre-existing gun-control statutes.

Much like the rest of the country, New York City residents demonstrated a keen interest in self-defense in 2020. According to a Dec. 23 report from the New York Post, there were “8,088 applications for first-time pistol and rifle permits submitted since March 22.” The number represented “a threefold-plus increase over the 2,562 submitted between March 22 and Dec. 31, 2019.”

However, the paper pointed out that during the March 22 through December 23, 2020 time period, only 1,087 license applications were approved by the New York Police Department’s License Division. During the same time period a year earlier, 1,778 licenses were approved.

It is important to understand that obtaining a firearm license is necessary to lawfully own a firearm in New York City and is an onerous process. Handgun license applicants are required to provide photographs and personal documentation, complete an intrusive application that includes questions about the applicant’s medical history, and sit for an interview. Those hoping to carry a firearm in the Big Apple in connection with their employment are forced to provide a letter of necessity detailing their need to carry.

Aiming to price many law-abiding New Yorkers out of firearm ownership entirely, the city’s handgun license and renewal fee is $340 plus an $88.25 fingerprinting fee. Those seeking a Rifle/Shotgun permit are required to part with $140 and the fingerprinting fee.

The normal process is so complicated that there is an entire consulting industry devoted to helping New Yorkers navigate the byzantine rules. This adds further costs to the application process. The License Division notes, “any fees you pay to a consulting firm are in addition to those required by law and collected by the License Division.”

Moreover, this convoluted and arbitrary process has engendered multiple licensing bribery schemes that allowed the wealthy or well-connected to skirt the burdensome firearm licensing procedure while law-abiding New Yorkers were left defenseless. In April 2016, the U.S. Attorney’s Office for the Southern District of New York (SDNY) indicted a gun license “expediter” on bribery and conspiracy charges related to the acquisition of New York City firearm licenses. In a press release announcing their guilty plea, SDNY noted that the fixer “charged his clients as much as $18,000 per gun license.”

The 2020 falloff in permit processing coincided with the escalating government response to COVID-19. An “NYPD source” told the Post, “The politicians are generally against giving licenses, to begin with, so it’s not a priority.”

According to a follow-up article on Dec. 24, the problems in the License Division and firearm license backlog were then exacerbated during last summer’s violent unrest. As one might predict, the violence led to a further increase in firearm license applications. At the same time, according to a Post source familiar with the situation, “Many cops in police headquarters, including the License Division, were put in uniform to police those protests.”

Obstacles to Second Amendment rights in New York and other jurisdictions—bureaucratic apathy, red tape and outright corruption-—show why we must fight against discretionary licensing.

Describing the extent of the backlog, Long Island gun-store owner Andy Chernoff told the paper, “I’ve never seen it this bad… This isn’t going away anytime soon. I bet these people don’t get their licenses for a year and a half.” A July 2020 permit applicant told the Post that as of December he had not heard from the License Division and his subsequent email inquiries “all bounce[d] back.”

New York City’s abdication of its responsibility to protect the Second Amendment rights of law-abiding residents came at a time when New Yorkers had every reason to seek out the means of protection.

The city’s crime woes weren’t restricted to homicides. A Dec. 29 New York Times article that summarized Gotham’s year in crime noted, “burglaries and car thefts spiked in a hollowed-out city. And bodegas, neighborhood staples during the throes of the pandemic, saw an increase in robberies and shootings. By summer, the frustrations of shutdowns and economic collapse had burst onto the streets. Shootings had doubled…”

Moreover, the Big Apple’s criminals got away with more crime in 2020. The Times article went on to explain, “This year, as crime increased, the police solved less of it. Police Department records, for example, showed that officers solved 26.3 percent of serious crimes in the second quarter of the year; department figures show that 35.8 percent of serious crimes were solved over the same period in 2019.”

In April, the New York City Mayor’s Office announced that it had released over 1,500 inmates from city jails as a response to COVID-19, boasting “Today the jail population is at a number last seen in 1949.” In June, NYPD Commissioner Dermot Shea told NBC New York, “We’re continuing to see people get arrested over and over and let right back out. And it really defies common sense.”

To be sure, New York City wasn’t the only jurisdiction whose pre-existing gun-control laws were used to block Americans from exercising their Second Amendment rights in 2020. On March 21, New Jersey Gov. Phil Murphy issued an order that prompted the state police to shut down the state apparatus for conducting NICS checks. On March 23, Washington Gov. Jay Inslee ordered all “non-essential” businesses closed, including gun stores. This cut Washington residents off from retail firearms and the background check system. As both New Jersey and Washington previously criminalized the private transfer of firearms, residents were unable to obtain firearms during this period.

The problems highlighted by the Big Apple’s apathy toward New Yorkers’ Second Amendment rights are exactly why we keep fighting to end any type of discretionary licensing system. As 2020 drew to a close, NRA’s state affiliate, New York State Rifle & Pistol Association, filed a petition in the United States Supreme Court that aims to invalidate New York’s regime that denies most New Yorkers their right to bear arms. While the High Court has yet to issue a decision to take the case, my hope is that this case or one like it helps us move toward a future where all law-abiding Americans can freely exercise their right to keep and bear arms.

THE MORONIC MYTHS OF MICROSTAMPING

A Right Delayed: Why We Can’t Give Government Discretion Over our Rights 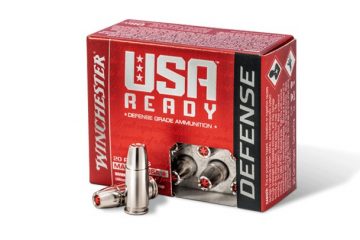