Below the Radar: Protecting Communities and Preserving the Second Amendment Act

The Funny Thing About Hollywood and Guns

There are some odd dynamics in international relations. Countries in which people are not free serve on the UN Human Rights Council. Political considerations guide every action.

Of course, the NRA is a single-issue organization so international relations are not usually front and center for us. We’re focused on protecting the 2nd Amendment rights of law-abiding Americans. The horrific attacks in El Paso and Dayton gave opportunistic foreign regimes an opening to offer clumsy critiques of the United States regarding our level of violent crime.

Venezuela and Uruguay issued travel warnings advising their citizens to avoid travel the United States. Venezuela’s Foreign Ministry hit out at President Trump, Congressional leadership, and Americans’ right to bear arms. CNN reports, According to the statement, one of the main reasons for the violent acts in the US is the “inexcusable indiscriminate possession of fire arms by the population, encouraged by the federal government.”

Venezuela does not appear to track crime or homicides any more, given that the country is in shambles. A nonprofit group estimates that the murder rate in the country of Venezuela was 81.4 per 100,000 population last year – and that was a decrease from 89 the prior year.  The U.S. murder rate for 2017 – the most recent year available through the FBI – was 5.3 murders per 100,000 population. To put it another way, Venezuela’s murder rate was more than 1600% higher than the rate in the U.S. in 2017.

Readers will remember that Hugo Chavez banned private firearm ownership. It has not gone well for the people of Venezuela – see here, here, and here. Readers will also remember that the current dictator Maduro – who is not even recognized as the President of Venezuela – blames American imperialism for all of the problems his agenda has wrought upon the people. The BBC reports that four million people have fled Venezuela since the end of 2015.

RELATED:  Exposing The Left's Demonizing Of The Modern Musket: Real Numbers Of Violent Crime In The US

Uruguay’s travel warning issued after these attacks was also issued on Monday. The United States Department of State updated its own advisory warning U.S. citizens about travel to Uruguay on Friday, “due to an increase in crime.” One may reasonably argue that Uruguay’s statement is a political counter. CNN also reported on the Uruguay statement but neglected to mention the political reality. CNN, unsurprisingly, did take care to note that Uruguay’s statement “noted other such factors, such as the ‘indiscriminate possession of firearms by the population.” 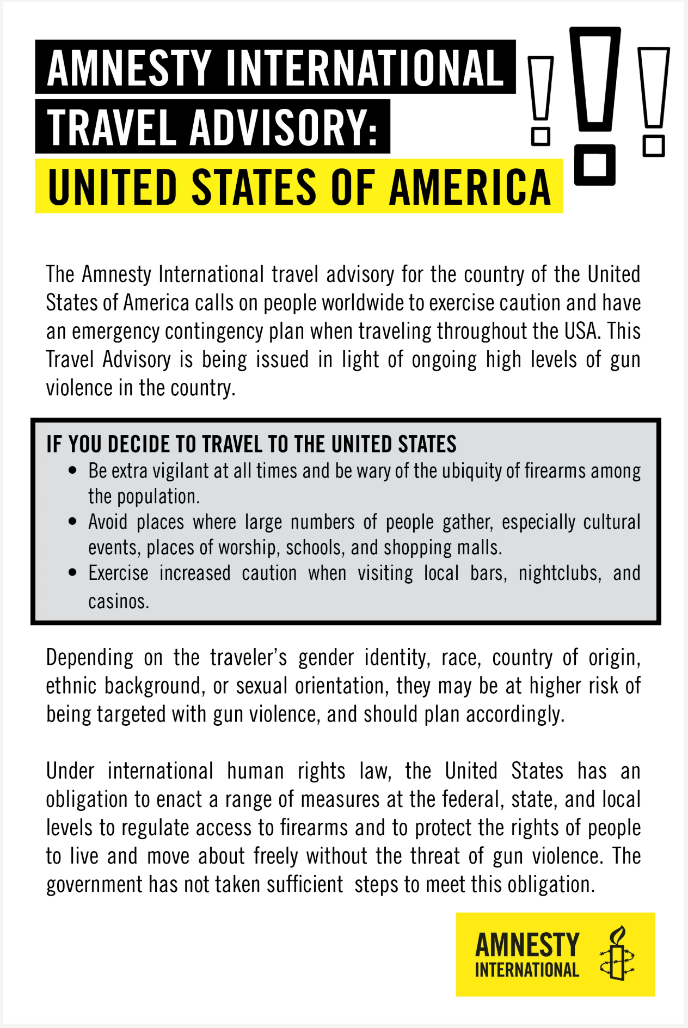 So Amnesty International is warning people about coming to the United States. Were not too sure how sincere Amnesty is about this warning though since Amnesty USA’s page on “Refugee and Migrant Rights” includes several criticisms directed at the United States government for not accepting enough refugees. The NRA is – again – a single-issue organization, but that policy page seems to be in conflict with the travel warning issued by Amnesty International. Does Amnesty want more or fewer people to travel to the United States?

Mulesky takes apart the warning using data. Most importantly, Mulesky notes that “While tragic and newsworthy events such as mass shootings can create this impression, gun homicides occur about 60 percent as often as they did 25 years ago…”

“The high level of legitimacy and authority that Amnesty enjoys as a human rights monitor has unfortunately provided a boost to the propaganda of repressive states and provided no benefit to victims of human rights abuses.”

Politicians rush to politicize high-profile events to pick up a few more supporters. Pragmatism is dead in the age of sound bites and a rush to be first to “do something.”

Amnesty International tried to leverage national news to rake in donations and, in doing so, has hurt their image. On gun policy, we’ve seen this story play out time and again.

When Gun Control Fantasies Go Off the Reservation