May 14, 2022 Guns In The News
Home»US News»Andrew Cuomo’s Fatwa Against the NRA (and Gun Owners Like You)
US News

A fatwa (proclamation) has been issued by the State of New York against the National Rifle Association (and gun owners like you): “I urge companies in New York State to revisit any ties they may have to the NRA and consider their reputations, and responsibility to the public,” tweeted the Ayatollah Andrew Cuomo, aka the Governor of New York State.

Conservative firearm advocates “have no place in the State of New York,” declared Ayatollah Cuomo. 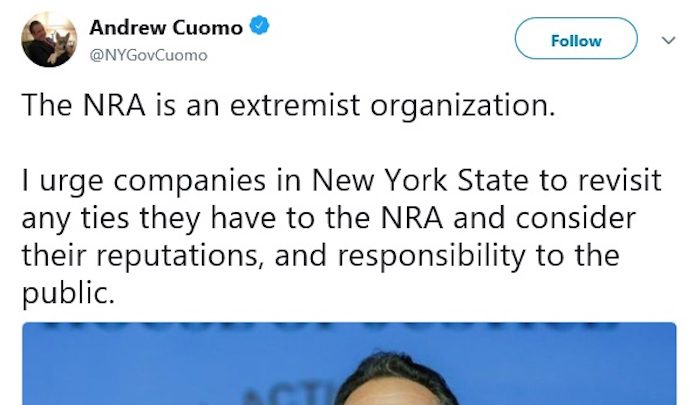 After you have bowed and faced Albany, you are instructed to read NYS’ holy website: Anti-gun sharia is imposed upon insurers and banks.

Roll-up the anti-gun prayer rugs: the NRA has filed a lawsuit to stop NYS’ establishment of an implicit censorship regime; retaliating against the NRA based on its speech; conspiracy; and violations of the 14th Amendment’s Equal Protection and Due Process, as well as Article 1, section 8 of the New York Constitution.

Who do you blame when things aren’t going well?

Blame the Jews, according to Muhammad, Hitler, and current regimes of Iran, HAMAS and its counterpart in the United States: CAIR.

Blame the Christians, according to Nero, President Obama, and Pope Francis.

Blame the NRA and gun owners, according to Michael Ian Black, Debbie Wasserman-Schultz, and Alyssa Milano.

Without weapons for self-protection:

Live as slaves: Jews in Egypt; Blacks in Southern United States; or Women for sex and children for labor throughout the world today.

Live as second-class citizens: Jews in Nazi ghettos; or Christians in Muslim-majority countries; indeed, any Kafir(unbeliever) must live in Dhimmitude.

Make it difficult to have or use a firearm

What part of the Second Amendment’s “…shall not be infringed” did legislators not understand?

You think you need a gun for self-defense, but in some jurisdictions, you must get approval first from a local sheriff.

Limit the size of gun magazines, despite that it takes seconds to reload a magazine; and criminals use several firearms.

The Catch-22: Liberals want gun-owners to have insurance, but NYS bans it.

Liberals seek to take your guns

Gun registries will lead to gun confiscation, as illustrated by Australia, Canada, and Germany; as well as the United States: California, Illinois, and the heart of liberalism: New York City.

National gun confiscation has been proposed by liberals including Rep. Eric Swalwell (2018); the NAACP (2018); and Hillary Clinton, presidential candidate (2016).

Admit it, liberals, you really do want a total ban on firearms.

While liberals keep their armed security

Celebrities had 500 police officers at the Oscars.

“[I]t … seems wrong for [a government] agency to put “pressure on an industry … to achieve policy results the administration has not been able to achieve through normal legislation or regulation,” wrote the Washington Post’s editorial board in response to the HUD Gun Suit by Andrew Cuomo, then Secretary of the federal Housing and Urban Development in 1999. That sentiment anticipates “themes that would continue to characterize Cuomo’s gun-control efforts over the next nineteen years” through today. [See the NRA Complaint’s ¶15, fn.7]