August 18, 2022 Guns In The News
Home»US News»Arizona Sniper Suspect: “I’m The Wrong Guy… My Gun’s Been In The Pawn Shop The Last Two Months”
US News

When Phoenix police arrested suspected freeway shooter Leslie Allen Merritt Jr. on Friday they victoriously tweeted, “we got him.”

But immediately after the arrest doubts began to surface, namely from Merritt’s father.

“He has been raised with too much respect for life and too much for firearms to have done this,” he said. “Whoever said my son is the freeway shooter is a moron.”

On Saturday a judge set Merrit’s bail at $1 million.

According to the , Merrit asked to make a statement to the court:

All I have to say is I’m the wrong guy. I tried telling the detectives that. My gun’s been in the pawn shop the last two months. I haven’t even had access to a weapon.

Police dispute the claims, saying that the evidence speaks for itself.

Though Merritt says his gun has been at a pawn shop for two months, reports claim he was arrested after attempting to sell the gun in question at the pawn shop.

A special agent with the Bureau of Alcohol, Tobacco, Firearms and Explosives says that there is no doubt they have the right gun:

Tom Mangan, a special agent with the Bureau of Alcohol, Tobacco, Firearms and Explosives, which has been assisting in the investigation, said the evidence gathered by DPS leaves “no doubt” the gun used was the one owned and pawned by Merritt.

According to Mangan, a bullet contains certain land and groove impressions after it’s been fired that are unique to a particular firearm. Firearms examiners would have test-fired the suspect’s gun and found impressions in the bullet that matched any ballistic evidence recovered from the shooting scenes.

“That’s a very lucky investigative lead that that gun wasn’t destroyed or thrown into the bottom of a river or buried,” Mangan said.

If Merrit’s claims of his rifle being at a pawn shop for the last two months are true, then he should be vindicated as soon as those records are released.

What do you think? Do police have the right man in custody? Or has Leslie Merritt been framed?

You Won't Believe What Honolulu Police Did to Waste $575,000 to "Keep Guns off the Streets"

What to Do After You’ve Bought Your First Firearm 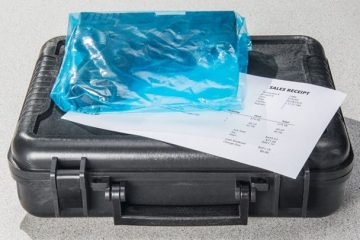