At 36 pounds, the Boys could hardly be called portable, but it weighed substantially less than a Browning M2 .50 BMG, which tipped the scales at 128 pounds with its tripod.

In the dark hours before dawn on the 17th of August, 1942, two U.S. Navy submarines cautiously surfaced off a darkened island in the Pacific Ocean. U.S. involvement in World War II was barely six months old, and things had not gone well for America. Imperial Japan’s aerial attack at Pearl Harbor had crippled the Pacific Fleet and our Western outposts had fallen to its armies. The decision-makers had already given priority to the European theater, so the Navy was left to do its best with limited resources. Our Navy never performed more brilliantly than it did that spring. It launched the Doolittle Raiders in April, and won massive aerial fights at the Coral Sea in May and Midway in June. In early August, we started taking ground away from Japan with the 1st Marine Division’s invasion of Guadalcanal in the Solomon Islands. At Makin Island, in the Gilbert chain, another type of action was about to get under way when those two submarines surfaced, opened their hatches and began to offload their cargo.

The subs were the Argonaut and the Nautilus. Their cargo was 211 members of the Marine Corps’ 2nd Raider Battalion and their equipment. These two submarines were designed to have special extra space for infantrymen and enough supplies to fight for a fairly short time. In addition to about 100 Raiders and gear per sub, there was also space for rubber boats, which had to be inflated on the open decks of the subs. Built in the early 1930s, the two subs anticipated the need for just such a vessel in a war that became a painful reality in 1941. The Marines themselves were a different type, trained deeply in fieldcraft, marksmanship and close combat. Led by Evans Carlson and heavy on firepower, the Raiders reflected an unproven type of unit and weaponry. That includes a curious bolt-action rifle that we’ll get to in a moment.

Thus, it was untried men and equipment about to execute an untried concept when they inflated rubber boats and prepared to raid enemy facilities on Makin. Problems arose immediately. The concept was to mount compact outboard motors on the rubber boats and get the assault force ashore right
at dawn. 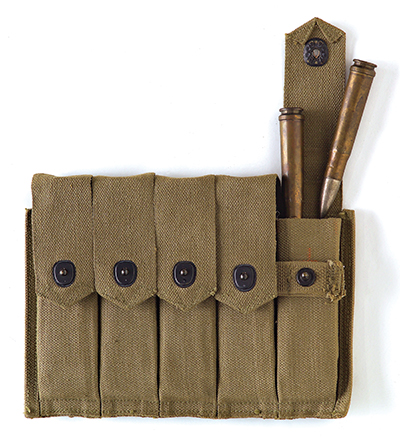 Extremely heavy surf flooded out most of the motors and the Raiders went to the paddles for a slower run to the beach. Almost all unit integrity was lost, and none of the various units ended up where they were supposed to be. Some equipment was lost and the situation was—to say the least—confused. Nonetheless, these were determined men who sorted out the problems and got on with the fight. About half of the 100-man enemy garrison was killed in a series of small-unit fights. The Raiders were able to destroy much of the enemy equipment. As the first day continued, fighting intensified and Japanese reinforcements—including close-support aircraft—began to have an impact. When the enemy attempted to get reinforcements ashore via seaplanes, different weapons were in order. In the between-the-wars era, there was considerable interest in infantry defending against tanks. Tanks of that time were relatively light and thinly armored. The British addressed the problem with a rifle designed by an English officer named Charles Boys.

Called the Boys Antitank Rifle, this was a .55-caliber, bolt-action rifle with a top-mounted, five-shot magazine. It had a super thick recoil pad, bipod, offset sights and a muzzle brake. This rifle weighed 35 pounds—same as a light Browning machine gun. Ammo was a .55-inch bullet weighing close to 1,000 grains at a velocity exceeding 2,000 fps. The Boys rifle and its solid-core, pointed bullet would penetrate armored vehicles of the late 1930s and possibly the Japanese variety. But, it was exceptionally awkward and heavy to carry. Recoil was described as murderous, severe, terrifying and other less-printable adjectives. Limited numbers of the monster bolt guns were procured for U.S. forces, and the Raiders apparently got some. In a lifetime of reading about modern infantry weapons and their use, I have never encountered another reference to the use of a Boys rifle by American troops.

The Boys rifle saw service with U.S. Marine Raiders during the Makin Island Raid of Aug. 17 and 18, 1942. These early commandos used them to dispatch two Japanese float planes.

We are concerned here with men and arms in their first use in war. At Makin, the Raiders did a lot of damage with a mix of good and bad in equipment. They needed better outboard motors for their boats and much better intel on what they were sailing into. It was an intense fight, but the unit was able to get back to the subs—with heavy casualties.

Other Raider weapons—Garands, Brownings, Thompsons—were rugged and reliable small arms that stayed the course. The Boys AT Rifle was obsolete, to be in museums, not armories, by the end of the war.

But, before this tank-killer of a bolt-action rifle cooled off, it did something remarkable. It shot down two flying boats with Japanese replacements at the battle of Makin Island.