On September 28, the Office of the Inspector General for the U.S. Department of Justice released a report titled, “Audit of the Handling of Firearms Purchase Denials Through the National Instant Criminal Background Check System.” The report details the operations of the FBI’s NICS system with a focus on how the DOJ handles instances where a firearms transfer has been delayed or denied.

The document reveals that in recent years there has been a sizeable decrease in the number of individuals that the federal government has prosecuted following a NICS denial. Notably, this decreased level of the use of current federal law to pursue those denied by NICS has occurred at a time when the Obama administration and other gun control supporters have sought to burden gun owners with new laws restricting the transfer of firearms.

Following a NICS denial, FBI sends the denied individual’s information to ATF’s Denial Enforcement and NICS Intelligence Branch (DENI) for further review. DENI then forwards a small subset of these cases to ATF field divisions, who in turn assign them to ATF field offices. Following a further investigation, ATF then refers a subset of these cases to their corresponding United States Attorney’s Office for potential prosecution. The USAO reviews the cases and decides whether to prosecute the denied individual.

The number of those prosecuted following a NICS denial has fallen dramatically since 2003. The IG report pointed out that in FY2003, USAO’s considered 166 individuals for prosecutions stemming from a NICS denial. Between 2008 and 2015 this number dropped to an average of 32 per year. In FY2015, 20 cases resulting from NICS denials were prosecuted. To put this number in context, in 2015 there were 106,556 federal NICS denials.

The report illustrates this shift with the following figure: 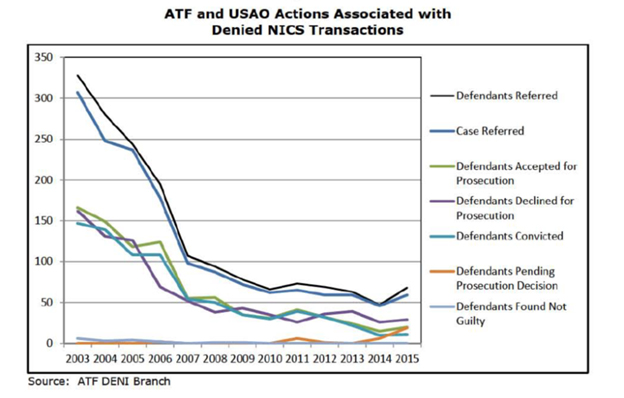 While the decline began during the latter portion of the Bush administration, the continuation of a depressed number NICS prosecutions appears to be official Obama administration policy. The report noted, “We determined that, in general, USAOs prosecuted NICS cases only when aggravated circumstances existed.”

The lack of prosecutions appears to have been further cemented into DOJ policy following the implementation of Attorney General Eric Holder’s “Smart on Crime” initiative, which was rolled out in 2013. The initiative called on DOJ officials to “ensure finite resources are devoted to the most important law enforcement priorities.” In relation to NICS prosecutions, the IG report discovered:

The [Executive Office for United States Attorneys] official told us and the Department confirmed in response to a draft of this report that their decisions on these cases reflected the application of the principle of the Department’s Smart on Crime Initiative as well as past prosecutive priorities that direct USAOs to prioritize prosecutions to focus on the most serious cases that implicate the most substantial federal interests.

Further, according to the IG report, this practice has continued under the direction of Attorney General Loretta Lynch. According to a White House fact sheet obtained by the IG Office, during a January 2016 conference call, Lynch told all U.S. Attorneys to “Continue to focus their resources – as they have for the past several years under the Department’s Smart on Crime initiative – on the most impactful cases…”

It is clear DOJ has not vigorously utilized existing federal law to prosecute those denied by NICS. Despite this scant utilization of current federal background check law, anti-gun politicians, including those in the Obama administration itself, continue to advocate for legislation that would subject more types of firearms transfers to a background check requirement. This focus on new restrictions rather than the more robust application of existing law reveals the anti-gun politician’s true motive isn’t to diminish unlawful firearm possession or reduce crime, but to further burden and discourage lawful gun ownership.

The DOJ’s choice to, and stated justifications for, not pursuing individuals who fail NICS checks also undermines key portions of the gun control movement’s narrative. In arguing for the criminalization of the private transfer of firearms, gun control organizations claim that every single person denied by NICS is dangerous. The Brady Campaign contends, “Brady background checks on gun purchases have blocked 2.4 million sales to dangerous people since the inception of the Brady Handgun Violence Prevention Act.” Michael Bloomberg’s Everytown for Gun Safety argues, “Since the background check system was started, it has blocked more than two million sales to dangerous people.”

This notion has never been accurate.  The statutory categories of persons prohibited from firearm possession have been used to encompass individuals who have never displayed a predilection towards violence; for example, those convicted of nonviolent felonies and those assigned a fiduciary to manage their benefits from the Department of Veterans Affairs. However, DOJ’s decision to prosecute a mere fraction of NICS denials further undermines this anti-gun narrative, as it suggests that the DOJ considers the vast majority of those denied by NICS to pose little threat to the public. Whether DOJ’s current passive posture towards those denied by NICS is appropriate is a point of legitimate debate, however, DOJ’s stance is certainly at odds with some of the gun control establishment’s favorite talking points.

In addition to the important information on NICS prosecutions, the IG report also shed light on data that shows the severe danger that recent efforts to close the so-called “Charleston loophole” pose to many non-prohibited individuals’ ability to exercise their Second Amendment rights.

Despite what gun control supporters contend, for many people the National Instant Criminal Background Check System isn’t “instant” at all. In 2015, nearly 10 percent of federal NICS transactions were delayed for further review. A delay can occur if a NICS check uncovers a criminal justice record, but system that lacks information on the final disposition of the case. Alternatively, as FBI has noted in their NICS fact sheet, a prospective firearms transferee might be delayed for simply sharing a “similar name and/or similar descriptive features” with an individual with a potentially prohibiting record.

In these instances, the transaction is referred to a NICS examiner for further review. In carrying out their duties, examiners are often required to contact various federal or state agencies to uncover further information regarding the prospective gun buyer. If after three days the examiner does not uncover prohibiting information on the gun buyer, the firearms transfer may go forward at the discretion of the transferor. However, in these cases, examiners may continue to search for prohibiting information on the gun buyer for up to 90 days following the initial background check.

The IG report found the following:

From FY 2003 through May 2013, about 1.3 million (2 percent) of almost 64 million background checks remained in an open or pending status for over 88 days at which time they were purged from NICS.

Marketed by gun control supporters as “no check, no sale,” pending legislation seeks to do away with the three-day safety valve that permits a transfer to go forward if the government does not produce information that the prospective gun buyer is prohibited.

Regardless of the number of those affected, this type of legislation is unacceptable, as it removes the burden that the government has to marshal evidence to prove that an individual is prohibited from possessing firearms before they can deprive that individual of their Second Amendment rights.

However, the IG report is important in that it highlighted the incredible scope of transactions that would be implicated by such impermissible legislation. The figures presented in the IG report make clear that this legislation has the potential to indefinitely delay millions of firearms transfers, all in instances where the government has failed to meet its burden to produce evidence that the person is in fact prohibited from possessing firearms. Worse, if enacted in concert with legislation that would criminalize the private transfer of firearms, non-prohibited individuals who are subject to such delays would have no lawful means of acquiring firearms. As NRA has previously noted, legislation to eliminate the three-day safety valve amounts to a backdoor gun prohibition.

The lackluster enforcement of current background check laws illustrated in the IG report should cause honest politicians and the public to question the efficacy of foisting further firearm transfer restrictions on America’s gun owners. Those concerned with crime perpetrated with firearms should recognize that the federal government already has the necessary tools to combat the criminal misuse of firearms, and that it is largely up to the executive branch to make effective use of them.

Another Resounding Victory for Firearm Rights