September 27, 2021 Guns In The News
Home»Commentary»Gun Control Discriminates Against the Poor
Commentary

For years, Allyson Hottinger feared each day would be her last. The Arkansas-based, single mother of two had long been embroiled in a toxic relationship defined by domestic violence. But even with protective court orders piling up, her former partner stalked and threatened her.

“Eventually, it was the local police chief who told me I needed to get a gun to protect myself. He knew that the police wouldn’t be able to get here in time to save me,” Allyson said. “But, at the time, I was going through all this and barely making money at my job. Affording a permit and a firearm seemed out of the question. I had a lot of court hearings going on and was trying to make ends meet.”

Allyson was eventually able to save up enough to purchase a concealed-carry permit, undertake several lessons to learn how to shoot and to buy a handgun for protection—all of which came to more than $700.

“Not everyone is going to want a gun for protection, but those of us who do should be able to do so without the financial hurdles from the government,” Allyson said. “Those of us on the margins just keep getting pushed further and further down the priority list.”

“High fee requirements for firearm permits demonstrably affect firearm ownership rates. In Indiana, 20.3% of adults have a concealed-handgun permit; in contrast, neighboring Illinois has a rate of just 3.3%.”

“Gun control has never been about controlling crime, but about control over the individual. Gun control has always been, and still is, about fear in one form or another,” said Amy Bellantoni, a constitutional-rights attorney at The Bellantoni Law Firm, based in New York. “Most significantly, it has never been about crime control; it is driven by those who are in power who fear those who are not. The government plays on the emotional fears of certain segments of the population, a fear of  harm, but never a specific harm by a specific person.”

Meanwhile, President Joe Biden (D) took office following months of campaigning on a promise to repeal the Protection of Lawful Commerce in Arms Act (PLCAA), a law that prevents gun makers and dealers from being held civilly liable for the illegal actions of third parties. The PLCAA doesn’t protect gun makers if they break the law or make a shoddy product; it only prevents them from being held liable for criminal misuse of their legal products. Repealing the PLCAA would decimate the firearms market, as it would allow activists to file innumerable frivolous lawsuits designed to bankrupt gun manufacturers and dealers with crushing legal fees. Who would be most harmed by such measures? Naturally, low-income citizens caught in crime-ridden communities who would find it more difficult to protect themselves or their families.

“The very people that my research shows benefit the most from owning guns, the people who are most likely to be victims of violent crime—many of whom are minorities who live in high-crime urban areas—are prevented from buying guns because of these fees,” notes John Lott, president of the Crime Prevention Research Center.

Thus, the Left’s ongoing campaign to weaponize lawsuits would drive up costs further, making the purchase of a gun unattainable to many.

“High fee requirements for firearm permits demonstrably affect firearm ownership rates. In Indiana, 20.3% of adults have a concealed-handgun permit; in contrast, neighboring Illinois has a rate of just 3.3%,” Lott said. “This dramatic difference is because until last year, the total cost of obtaining a concealed-handgun permit in Indiana was $50, while in Democrat-controlled Illinois, the total cost was at least $400.”

Furthermore, Lott emphasized, in Indiana, urban minorities who often live in high-crime areas (and who stand to benefit the most from concealed carry) commonly have permits. Illinois permit holders, on the other hand, are overwhelmingly affluent, suburban white males.

This demonstrates how the renewed push by anti-gun activists to raise fees and imperil the firearm industry means that only the wealthy sub-sectors of society will be able to exercise their Second Amendment rights. Meanwhile, those who are most-vehemently opposed to gun rights—such as the D.C. elite and many Hollywood stars—can afford to hire armed security details.

The Poorest are Left Vulnerable
Reducing or eliminating the ability to protect oneself necessarily makes the population more vulnerable to crime.

“The NYPD has denied numerous clients for DMV-related issues,” said Bellantoni, referencing her home state, which is hamstrung by some of the most-stringent gun-control laws in the country. “Minorities are more likely to be stopped for some infraction, validly or not. The poorer classes are generally unable to hire a lawyer to help them, or they are unable to pay fines, which can then compound their financial problems.”

Additionally, in New York state and City, living in a high-crime area does not qualify as a valid reason for a carry license.

“Let that sink in. A person with no longstanding historically recognized prohibitors to gun possession, who lives in a high-crime area, cannot carry a gun,” said Bellantoni. “It is the very-high-crime area they live in that requires the gun for protection in the first place. Statutes that allow discretion when issuing a license to possess or carry a firearm must be repealed.”

James Williamson, a retired Special Forces colonel and security and logistics expert, noted that the fact that residing in a high-crime pocket prohibits many from legally obtaining a weapon for self-defense shows just how twisted the thinking of elitist lawmakers truly is.

The inherently discriminatory policies are further compounded by the Left’s gun-control mission. They want to pass yet more laws aimed at imposing higher permit and renewal fees, biometrics, arduous background checks, pricey training, transfer taxes and certification and identification requirements. Ironically, it’s routinely the same folks who object to identification obligations for voting who show bias against the poor when it comes to fees and charges related to gun ownership.

In fact, concealed-carry permits in several blue-heavy states are not even just expensive, but are nearly impossible to obtain. New York state, for example, is a “may-issue” jurisdiction. In New York City, carry permits are rarely granted, even after the non-refundable application charge of more than $400 has been paid. But if you are wealthy and politically connected—think Robert De Niro, Laurance Rockefeller and Donald J. Trump—you have a far higher chance of being able to defend yourself.

The idea that a wealthy or well-connected person’s life is more valuable than someone of lower socioeconomic standing is deeply troubling. As Hottinger highlighted, on average, it took the police four minutes to respond to her 911 calls when her stalker came to her house—and that’s a very fast response time. Still, four minutes is a long time to give a violent person. And with the challenges police forces are facing today, response times are not likely to decrease.

The Unfairness of Gun Control
Is it fair that only the richest in America can afford to defend their lives, while others are left to wait for help?

Ashley Hlebinsky, curator emerita and senior firearms scholar at the Cody Firearms Museum and president of the Gun Code LLC, pointed out that the first gun control aimed at the poor appeared in 1866 in the South.

“In essence, after the American Civil War, the laws in some southern states shifted to focus on types of firearms, targeting inexpensive ones. In some areas of the South, the only handguns that were legal were Army and Navy models, which were expensive and therefore out of reach to a portion or class of the population,” she said. “This classist approach has continued into the 20th-and 21st-century gun legislation, which shifted to regulating the gun rather than the people.”

What is also often overlooked is how such measures have historically been used against minorities and those on in the lower-economic echelons of the United States. After the Civil War ended in 1865, “Black Codes” were used in the South to prevent Black people from owning firearms. In 1866, for example, newspapers in Mississippi boasted that groups had confiscated firearms from ‘freedmen,’” said Hlebinsky.

Some historians now reflect that gun control in itself is racist and is more about disarming financially struggling Americans than controlling the use of firearms.

According to Hlebinsky, gun control has long been a universal code name for exercising a monopoly over society’s most-vulnerable.

“Since the earliest firearms regulations, laws were passed to keep firearms out of the hands of certain people,” she said. “In Europe, nepotism played an important role as a deciding factor for gun ownership, and in the United States, both classism and racism were driving forces of gun-control legislation.”

Bellantoni also pointed out that the costs of the nonsensical gun-control laws designed to disenfranchise the poor will also affect middle and upper-class Americans. “While the rich may have other means of self-protection, the police cuts coupled with gun-control measures will cause crime to increase for everyone,” she said.

Jeff Gonzales, a retired Navy SEAL and founder of weapons training company Trident Concepts, contends that states need to take bold steps to fight back against any prejudice-driven mandates delineated from the federal government under the guise of safety.

“Any form of gun control discriminates against the masses, but those impoverished seem to suffer more,” he said. “States need to protect their citizens from overreaching federal officials. And lower barriers to obtaining a firearm. Many states make it overly complicated or impossible through their bureaucratic processes. If you are legally entitled to own a firearm, as stated in the Constitution, any form of legislation is marginalizing your rights.” 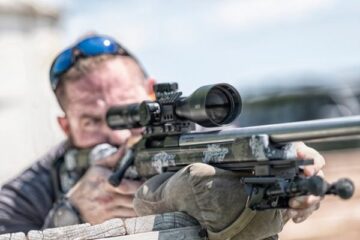