I got excited about the Kel-Tec P15 last year when their team teased it on a call. A 15+1-round, highly concealable 9 mm, you say? Oh, and it’s Kel-Tec’s first striker-fired design? Yep, we’re interested. So, I reached out to them immediately. And then I waited. And waited … the Kel-Tec team’s intentions were one thing, but realization was another (like everything else in the post-pandemic marketplace).

Finally, the finished P15 was revealed at SHOT Show. The polymer version we were expecting was there, but so was an aluminum walnut-grip version. If you like classic styling, you can’t help but notice that gun.

The biggest selling point of the P15 for me is its width—a mere 0.875 inches. On the range, my smallish hands like that, but of course where it really matters is in carrying concealed.

The Kel-Tec P15, whether in polymer with gator grips or in aluminum with walnut grips, sports a grip safety, reversible magazine release, day/night sights, large slide serrations fore and aft and a beveled muzzle for easier holstering.

Following closely behind width as a selling point is the gun’s 15+1 possible capacity, a fairly impressive cargo hold for such a small gun. Of course, it’s even more concealable with its 12+1 flush-fit magazine.

Both versions of the P15 have a back-strap grip safety. Many people don’t like these—and I certainly don’t love them—but they are preferable to needing to operate a thumb safety in stressful situations, as adrenaline usually strips us of fine motor skills and full brain functioning. In real-life, defensive-gun-use situations, being able to simply pick up the gun and fire it without fiddling around with anything small is a bonus. And this grip safety is well-designed enough that I didn’t find it to be a distraction while shooting; however, if you really hate the grip safety, and if it’s legal to do this in your area, it’s easy to deactivate it with a simple turn of a screw once the slide is off. Turning this screw will also deactivate the magazine disconnect if you like (which stops the gun from shooting without the magazine in), or you can have one without the other. That’s a tidy solution.

Both P15 models are also optics-ready. A removable polymer cutout section on the top of the slide allows you to install a red-dot sight, such as the Shield RMSc or the Holosun 507K.

If you’d like to mount a flashlight or laser, however, you’ll need to stick to the polymer version of the P15, which has a single-slot Picatinny rail for such uses. 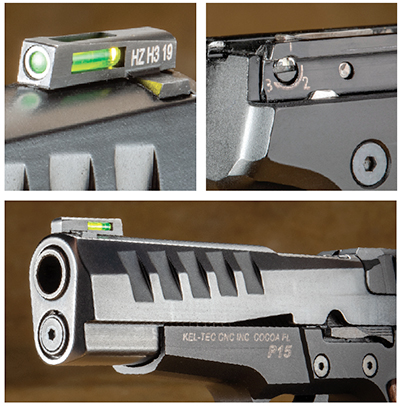 A screw under the slide has three positions to allow you to disable the grip safety and/or magazine disconnect.

Out of the box, the polymer model has a unique “gator” texture pattern to make it easier to grip on the sides, plus cutouts in the polymer front and rear (as well as on the front of the trigger guard for the Lena Miculek types). The aluminum-framed version comes with nice walnut grips and subtler stippling on the front- and back-straps, but unlike the polymer version, which only offers an alternate back-strap, these grips are interchangeable.

Kel-Tec placed the triangular mag-release in a common spot—sort of bridging between the grip and into the slightly undercut trigger guard where it meets the grip. This release is reversible for lefties.

The sights on the P15 are a mix of Tritium and Hi Viz polymer—intuitive to use and easy to see, day or night. 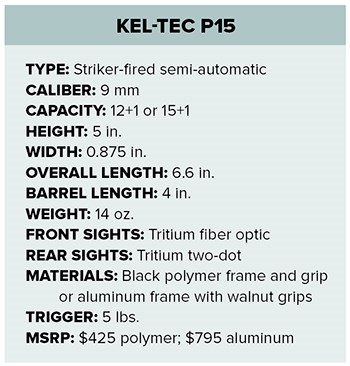 I decided to shoot both versions of this gun and far preferred the aluminum frame to the polymer—unsurprising, given that metal guns soak up some of the recoil effects. Both guns performed well and were easy to operate. The only exception on ease of operation for me was the magazine release: Not only is it far forward, but the angle of depression is diagonally into the grip, so I would need a much longer thumb to achieve that angle with my dominant hand.

For the two-stage trigger, reset seemed to exist all the way forward, but the trigger pull overall was very light and smooth. For such a small gun, it was remarkably easy to shoot accurately.

So, was it worth the wait? Yes. I would recommend the P15 to people seeking a concealed-carry 9 mm, provided they can reach that mag-release button a little better than I can. This gun, especially at this price, is a very respectable choice that is intuitive to use, has a higher-capacity than most pistols close to its size and delivers accurate stopping power. It therefore fits most people’s needs just perfectly.