Arguments never end about which cartridges are adequate for the hunting of elk. Nobody has ever said, however, that a bullet fired from a .338 Win. Mag. lacks enough power for that task. I’ve carried a Ruger M77 in .338 for years upon years hunting elk, and it has never let me down using a variety of bullet designs and weights. Further, you wouldn’t have to twist my arm too hard for me to declare that the Barnes 210-grain Triple Shock X (TSX) is one of the best. 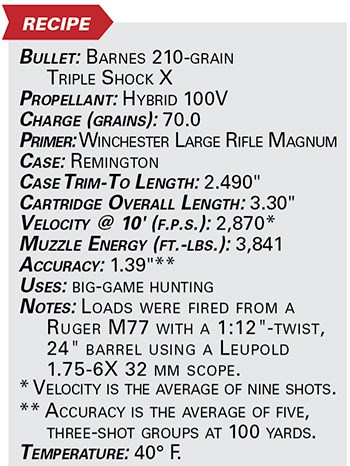 After all those years of shooting, the start of the Ruger’s rifling is somewhat worn, so I have had to increase cartridge length for that gun in order for bullets to contact the rifling lands. Barnes lists an overall cartridge length of 3.320″ for the TSX and suggests that finding the most accurate seating depth for individual rifles starts by seating bullets at least 0.050″ short of the lands and that “… it is not uncommon to find the best accuracy with a jump of 0.020″ or more.” However, a cartridge length of 3.30″ is as long as will fit in the magazine of my Ruger M77. Even with its extended jump, the old Ruger still shot a respectable 1.39″ average for five, three-shot groups.

Proper propellants for the Triple Shock X loaded in the .338 Win. Mag. run from Varget on the relatively fast-burning side to H4831 on the slow-burning end. IMR 4350 is a standard propellant for the .338, and 70.0 grains of it, Hybrid 100V or Reloder 17 delivered velocities within 10 f.p.s. of each other. The recipe lists Hybrid 100V, as its accuracy was a touch better than the other two, and it had a standard deviation of 22 f.p.s. over nine shots.

While the arguments regarding suitable elk cartridges will continue, using a .338 Win. Mag. with Barnes TSX is one option that won’t cause controversy.