Introduced in 2021 during the pandemic pandemonium, the CVA Paramount HTR adds another dimension to the continuous muzzleloader performance improvements that CVA is marketing via its Paramount series. That lineup includes the original Paramount, Paramount Pro and now the HTR. HTR is an acronym for “Hunter,” befitting the purpose of the workhorse rifle.

Out of the box, the HTR will surprise you since it basically appears as a bolt-action rifle. You will wonder if CVA sent you a rifle from its sister company, Bergara. Wonder no more. This muzzleloader looks like a centerfire and performs like one with muzzle velocities racing past 2500 fps.

The caliber selection may also surprise you. CVA testing has led them to embrace both the .40 and .45 as the calibers of choice for velocity, efficiency and precision. Their love affair with the .45 dates back more than a decade with me. I shot my first and only free-range red stag in Argentina in 2005 armed with a CVA Kodiak Pro 209 Magnum in .45 caliber. That test was proof enough for me of the effectiveness of the .45.

Moving on to the HTR, its sleek, centerfire appearance is accentuated by the missing cleaning/loading rod that characteristically is cradled under the barrel and confined with the aid of a compartment fabricated into the fore-end of the stock. Instead, the HTR includes a collapsible, carbon fiber field loading rod complete with a handy MOLLE pouch for ease of deployment. Yank the compact rod from its pocket and snap it to watch it form into a sturdy rod with the same system as a collapsible tent pole.

The reasons for this muzzleloader change teams directly with the mission of the HTR: precision. Engineers at CVA determined that to achieve the highest accuracy possible, the ramrod should not be attached to the barrel. Despite a diminutive size, an attached ramrod affects the benefit of the 26-inch free-floating Bergara barrel that is (forgive the pun) paramount to accuracy. No barrel contact with the stock or a ramrod reduces vibration and thus increases accuracy of the well thought system. 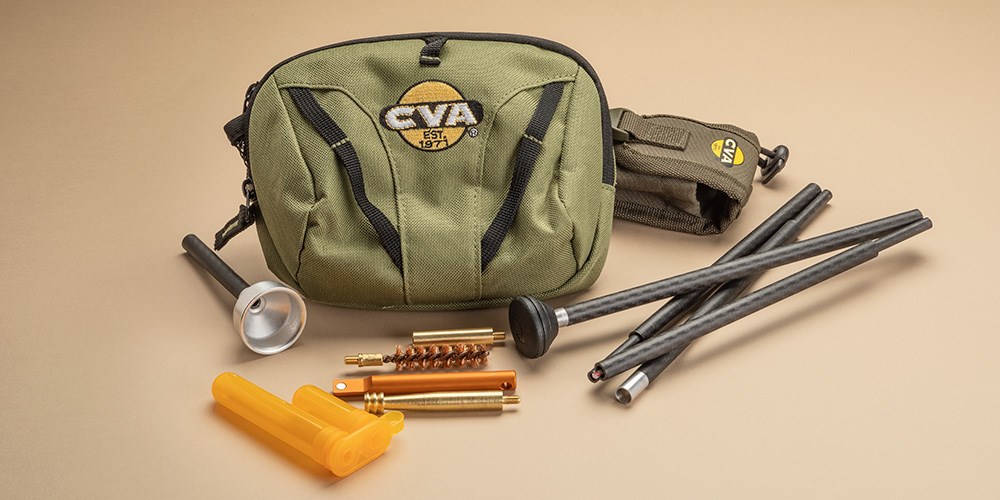 Before going into more specifics of the overall muzzleloader, the team at CVA pooled resources with their sister company, PowerBelt Bullets. To ensure the Paramount series, including the HTR, shot incredibly accurately at extended distances, they designed the ELR bullet simultaneously. The smaller bore diameter of the .45 allowed a projectile of the same weight for a .50 to be designed longer. This allowed engineers to lengthen and taper the projectile to create a bullet with a .333 ballistic coefficient when shot from a 26-inch barrel with a 1:22-inch twist rate. The result for the .45 was the 285-grain ELR bullet. The .40 HTR matches ideally with a 225-grain ELR bullet.

CVA took that information and added two additional steps to make NASA envious of their launch. They utilized Blackhorn 209 propellent for its consistency, and to light the fire the world was introduced to the VariFlame adapter. This device securely holds a large rifle primer. CVA discovered early that a standard 209 primer swelled, making them incredibly difficult to remove after igniting the hotter Blackhorn loads. The large primers were easier to remove using the VariFlame and burned the powder charge in a complete, efficient manner. CVA offers load information for Blackhorn 209 in both volume and weight recommendations. For optimum results weight is advised, but I did my testing by volume and was not disappointed.

The one drawback is that the VariFlame adapter includes a set of tools to seat the large rifle primer and subsequently remove it after firing. It is merely a step to complete prior to hunting so the primer is ready for use as part of your speed loading preparedness. Drawback aside, the teamwork propels the 285-grain projectile with velocities of many centerfires or better, comparable to a .308 Winchester. You can easily push the .45 to 2560 fps with safe loads provided by extensive CVA testing.

To load, you simply check the safety, rack the bolt rearward like a bolt action, use the VariFlame rifle priming tool and insert the primed VariFlame into the breech plug. Close the bolt and you are ready to fire. Another bonus to the Blackhorn 209 system devised by CVA is that the muzzleloader does not need to be cleaned meticulously after each shot. CVA recommends a dry patch between shots while using Blackhorn 209 and a slightly damp patch with other propellants. I easily pushed 10 rounds through or more before doing a quick scrub.

Moving away from the propulsion collusion between the PowerBelt ELR and Blackhorn 209, the rifle itself is designed for hunting, not fireplace display. The Bergara barrel is nitride-treated over the stainless steel. This aids in corrosion prevention from the environment and shooting residue. The barrel also is threaded ¾x20 for the addition of a muzzle brake if you feel it is needed for recoil. During testing, I did not feel the need to accessorize more. Recoil was easily manageable during range sessions. Lastly, the barrel is tapped for one- or two-piece Remington 700 short-action bases. CVA recommends a one-piece Picatinny rail with 20 MOA slant for optimal aiming.

The safety is a two-position toggle. Flip it forward to fire and rearward for safe. Just opposite of the safety is a button on the action frame to depress that smoothly releases the bolt for removal. The HTR trigger is adjustable from 2 to 4 pounds with a factory setting at 3 pounds. Mine broke cleanly at 3.0 pounds with no noticeable creep.

The free-floating barrel and action rest in a composite stock with an adjustable comb for perfect aiming alignment between the muzzleloader and your optic of choice. Inside the stock is an internal aluminum chassis to fortify the stability of the action and barrel. The stock is dipped in Realtree Hillside camouflage to accentuate its hunting demeanor.

If there is one negative, aside from having to independently load large rifle primers into the VariFlame adapter, it is the fact the rifle, without a scope, weighs 9.6 pounds. Muzzleloaders, by nature, are a larger beast, and when you enhance accuracy, an extra pound or two is inevitable. Nevertheless, it tops out similar to most larger caliber centerfire rifles when fitted with a scope. Weight is easily forgivable with the delivered accuracy results.

I received the HTR after our hunting season, but during the 2021 season I was able to hunt with the Paramount Pro. The .45 Pro, teamed with the ELR bullet, made for a smoky ending on a mature Iowa buck. One shot literally rolled the buck over on its back. Despite the Pro having a few upgrades, it still retains many Paramount characteristics found on the HTR. I am looking forward to a romp in the woods with the little brother HTR in 2022.

I Have This Old Gun: Ruger's Red Label