August 18, 2022 Guns In The News
Home»Commentary»Independence Day and Gunpowder are Forever Linked
Commentary

Because I still have a strong English accent, Independence Day tends to bring with it a whole host of good-natured jokes at my expense. “Didn’t we kick you out?” my friends like to ask. Others invite me to “send condolences to the Queen,” or inquire, sardonically, “Tell me: Are you rooting for the colonists, or for George III?”

Of course, as those teasing me know, I am rooting for the colonists. And I am not just rooting for them then. I am rooting for them now, as well. What do I mean by that? I mean that to appreciate the Fourth of July properly is to comprehend that it is just as relevant today as it was back in 1776. I mean that in celebrating it as we do, we are re-committing ourselves to a set of practical principles that transcend time, place and, yes, even my noticeably odd way of pronouncing “tomato.”

I mean that there is a good reason that downtrodden people in places as far away as Ukraine and Taiwan look to Thomas Jefferson’s immortal Declaration of Independence, and that good reason, if I may quote Abraham Lincoln, is that “in the concrete pressure of a struggle for national independence by a single people,” Jefferson “had the coolness, forecast, and capacity to introduce into a merely revolutionary document, an abstract truth, applicable to all men and all times, and so to embalm it there, that today, and in all coming days, it shall be a rebuke and a stumbling-block to the very harbingers of reappearing tyranny and oppression.”

The French Charleville musket was a staple of American efforts to throw off the yoke of British oppression. It found such favor in America that in 1795 the first U.S. musket made at the legendary Springfield Armory was a copy of this French musket.

Every Fourth of July, we hear Jefferson’s famous phrases—“when in the course of human events;” “we hold these truths to be self-evident;” “endowed by their Creator with certain unalienable rights;” “deriving their just powers from the consent of the governed”—and we remember the ideals on which this nation was explicitly founded. And then, once they have been read, we hear the bang of the gunpowder, and we remember what it was that gave those ideals their teeth. It is all very well to insist in principle “that whenever any Form of Government becomes destructive of these ends, it is the Right of the People to alter or to abolish it.” It is quite another actually to do it. The American colonists did it—at great risk and at great cost—and, in so doing, they set an example to the world. Many died. Many were injured. None knew how the attempt would turn out.

In a notable letter to his wife, Abigail, John Adams expressed his hope that America’s Independence Day would be “celebrated, by succeeding Generations, as the great anniversary Festival.” As the years have passed, we have come to understand this aspiration primarily as a call to recommit to our ideals. And, of course, it is that. But this “it,” Adams believed, “ought to be solemnized with Pomp and Parade with shews, Games, Sports, Guns, Bells, Bonfires and Illuminations.” This was not solely an abstraction to him; rather, it served as both the Memorial Day and the Veterans Day of its era—as a solemn moment of unity during which Americans might reflect upon the great sacrifices that had been made by the ragtag bunch of musket-wielding volunteers who had managed to prevail against the mighty British Empire.

Today, we know who won the war. Back then, though, many Americans simply assumed that they were signing their death warrants. At one reading of the Declaration of Independence, the plump Benjamin Harrison of Virginia told the slim Elbridge Gerry of Massachusetts, “I shall have a great advantage over you, Mr. Gerry, when we are all hung for what we are now doing. From the size and weight of body I shall die in a few minutes, but from the lightness of your body, you will dance in the air an hour or two before you are dead.”

And yet they did it anyway. Meditating upon the nature of the United States, F. Scott Fitzgerald once wrote that “France was a land, England was a people, but America, having about it still that quality of the idea, was harder to utter—it was the graves at Shiloh and the tired, drawn, nervous faces of its great men, and the country boys dying in the Argonne for a phrase that was empty before their bodies withered. It was a willingness of the heart.” The key word here is “willingness”—willingness to appreciate what we have, willingness to understand why we have it, willingness to maintain it in its purest form. 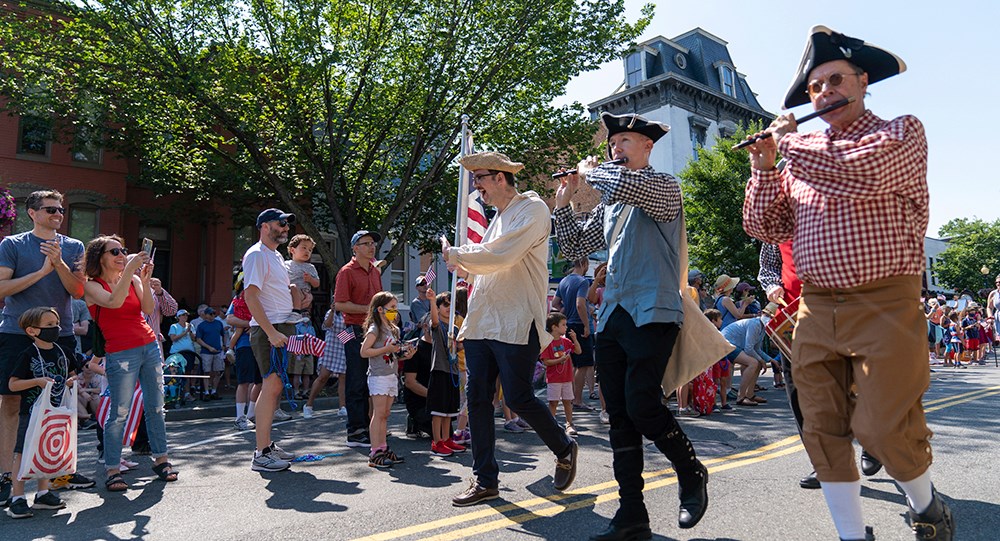 After all, the Founding Generation did not have to rebel. Indeed, when compared with the absolute tyrannies of the 20th century, the regime under which they lived was pretty good, all things considered. They were relatively rich, they lived in relative peace and they were less tightly governed than were the British back in Britain. But, while things may have been “good,” they weren’t good enough, and, to people who seek liberty, that matters. The first Constitution of New Hampshire, ratified in 1784, held that “the doctrine of nonresistance against arbitrary power, and oppression, is absurd, slavish, and destructive of the good and happiness of mankind.” That is either true or it is not, and if it is—and I strongly believe that it is—then there can be no moment at which it makes sense for a free people to relinquish their liberties.

Nearly a century ago, President Calvin Coolidge observed that, “about the Declaration, there is a finality that is exceedingly restful.” “It is often asserted,” he continued, “that the world has made a great deal of progress since 1776, that we have had new thoughts and new experiences which have given us a great advance over the people of that day, and that we may therefore very well discard their conclusions for something more modern.” Coolidge rejected this idea in its entirety, explaining instead that “[i]f all men are created equal, that is final. If they are endowed with inalienable rights, that is final. If governments derive their just powers from the consent of the governed, that is final. No advance, no progress can be made beyond these propositions.”

The same must be said of the right to keep and bear arms, which has been inextricable from American liberty since the outset. George Orwell famously recorded “the connection between the discovery of gunpowder and the overthrow of feudalism,” observing that “ages in which the dominant weapon is expensive or difficult to make will tend to be ages of despotism, whereas when the dominant weapon is cheap and simple, the common people have a chance.” Among other things, the Fourth of July serves as a memorialization of exactly this, marking for posterity one of the most-famous examples in all of human history of the common people having had “a chance.” Independence Day is not a celebration of a King or Queen, or of a president or legislator, or of a glorious foreign entanglement, or even of a particular place. It is the affirmation of an idea.

The symbols of the Fourth are fittingly quotidian. They are the Concord Minuteman, with his musket; the backyard barbecue, full of burgers and dogs; the ice-bucket of beer, glistening in the July sun; the small-town procession; the midday game of baseball; and, of course, Old Glory, fluttering outside every house. The day is loud, as is only appropriate for a celebration of our most-deafening national moment: the shot that was “heard round the world.” We wake up to parades. We spend the afternoon with music blaring from all corners. We fall asleep to the sound of fireworks. In more-traditional areas, we might puncture the day’s quiet with fife and drums; in less-formal settings, we get the same job done with rock and roll. But, in all cases, the message is the same: “This was our moment. Now remember it!” 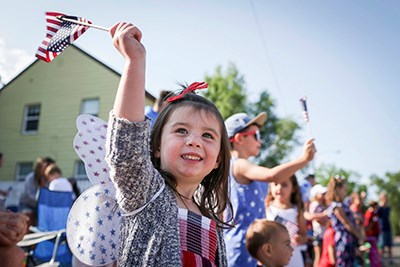 I have lived my entire life with the United States of America being a fact in the world, like the oceans or the seasons or the night. But America was not always here, and it was by no means guaranteed that it ever would be. Even now, nearly 250 years after the Founding, America remains different than everywhere else. America shares a continent with Canada, but it is not Canada. America shares a history with Britain, but it is not Britain. America has been populated by people from Europe and Africa and Asia and South America, but it is not Europe or Africa or Asia or South America. Something magical happened in this country at the end of the 18th century—something unique and unusual and, perhaps, providential. The result would have been satisfactory to Goldilocks: Dissatisfied with the status quo, Americans staged a revolution that avoided zealotry; they became innovators who drew heavily on the past; they exhibited a respect for the individual that refused to descend into libertinism; and, thankfully for those who came later, they had the foresight to write it all down.

Introducing the U.S. Bill of Rights into Congress in 1789, James Madison proposed that one of the chief virtues of his list would be to ensure that the liberties it protected would be “incorporated with the national sentiment” and, thereby, that they would survive over time. The Fourth of July plays a similar role within our firmament. I was not born in this country, and yet, from my infancy, I knew all the stories as a matter of course. I knew about Paul Revere, and the Battles of Lexington and Concord, and the winter at Valley Forge. I knew about Jefferson’s prose and John Hancock’s signature and the crossing of the Delaware on Christmas Day. In an unusual twist of fate, the house I grew up in had been sold on July 4, 1776, and when I first found the original title deed in a drawer, I can remember thinking, It would be months before the people who wrote this document found out about that.

As I have noted elsewhere, it took me a while to understand the Second Amendment, but, once I had, its centrality to the American idea became clear. Tench Coxe’s revolutionary-era asseverations that “the powers of the sword are in the hands of the yeomanry of America from sixteen to sixty,” and that “the militia of these free commonwealths, entitled and accustomed to their arms, when compared with any possible army, must be tremendous and irresistible” sums up the nature of a free citizenry. His ensuing questions, “Who are the militia? Are they not ourselves?” made the consequences clear.

This Independence Day, as the fireworks explode in the sky, I shall remember what they represent. I shall revel in their light and in their heat. And I shall resolve that as long as I am an American, this day will be for remembering why the Minuteman is never without a musket by his side.

Gun Owners, Are You Tired of Being Accused of the Crimes of the Guilty? (Video)