August 6, 2022 Guns In The News
Home»Commentary»Loading Bench: The Berger Juggernaut At 1,000 Yards
Commentary

Although frequently used in 1,000-yard engagements, the .308 Winchester is often regarded as a “900-yard cartridge.” It gets this reputation because most bullets fired from .308 Win. rifles fall below the speed of sound slightly before they reach 1,000 yards. In Bryan Litz’s book Applied Ballistics For Long-Range Shooting, he touches upon this aspect and covers certain designs that begin to tumble end over end as they broach this mark. Such destabilization happens as the bullet becomes subsonic. During this transonic period, most projectiles experience turbulence and get knocked off course, making them far less consistent than they were just a few hundred yards prior. But, with millions of rifles around the world chambered in this classic cartridge, we couldn’t just abandon the .308 Win. as a long-range option—particularly not with long-range shooting currently as popular as it ever has been. Fortunately, Berger’s 185-grain Juggernaut Target bullet (bergerbullets.com) was designed for exactly this purpose.

The author assembled loads using Lapua brass, widely respected for its consistency, and CCI BR-2 large rifle primers with which he has always experienced good results.

This heavy-fisted projectile from the Arizona bulletmaker draws its name from its ability to smash through this troublesome velocity band entirely undisturbed. It’s able to do so because of its extended-length tangent ogive, which is designed to hold its course when the air gets rough. Theoretically, this bullet should be as accurate at 1,000 yards as it is at 100. As one of those many gun owners who have a .308 Win., I was curious to test this claim and see exactly how groups would hold up after these bullets had dropped below the sound barrier.

Our friends at Berger were able to furnish me with a sample of the projectiles in question, and they also offered up some brass from sister company Lapua. Being that this was my first time working with the Finnish cases, I decided to weigh a 10-piece sample to get an idea of the legendary consistency that the benchrest crowd touts at every match. I certainly wasn’t disappointed, as this sample fell into a tolerance of just +/-0.2 grains, outrageously rivaling most bullets. As this wasn’t my first .308 rodeo, I already had my favorite powder for this cartridge on hand, Hodgdon Varget, as well as CCI BR-2 large rifle primers that have never failed to perform. The last item that I needed to wait for was a Forster National Match Sizing Die. Considering that this brass hasn’t been previously fireformed, I wanted to run it through a full-length sizer to ensure consistency. I chose the National Match die because it sets the headspace back an additional 0.003″ of an inch. This helped facilitate easy cycling, as the chamber of my Savage Model 10FP test rifle has always been a little tight.

Forster’s National Match full-length sizing dies set shoulders back 0.003″ for easy cycling even in rifles with somewhat tight chambers, such as that in the Savage Model 10FP that the author used for load development.

Using a Hornady overall-length tool, I determined that bullets were going to need to be seated to an overall cartridge length of 2.965″ to touch the lands. This posed a problem because my magazine could only feed rounds that were no longer than 2.900″. Being foolishly optimistic, I weighed out my charges and seated the bullets to magazine length for best functionality. This, of course, proved to be a mistake, as the best consistency I could muster was a 1.751″ group from a powder charge of 43.2 grains, which was nearing the top end of the spectrum. My second-best group measured 1.842″ and came from 39.7 grains, which is just a touch over the minimum charge.

Taking this information back to the drawing board, I built another 10 rounds of each load, this time with an overall length that would put the ogive just 0.010″ from the lands. Although they needed to be loaded singly, that tightened things up considerably, yielding a best five-shot group that measured 0.983″ from the stout charge and 1.153″ from the light one.

At 1,050 yards, the Juggernauts clustered into groups that averaged 13.818″, with the best measuring 9.530″. That average equates to 1.26 m.o.a., which is approximately the same relative dispersion as was exhibited in groups recorded by the author at 100 yards.

In most situations, there wouldn’t be anything else to do other than run as many of those 43.2-grain loads off as possible and see how they grouped at the 1,050-yard range that is just a short 200 miles west of where I live. With a ride like that ahead of me, however, I decided to run some numbers through a ballistic calculator before I returned to the loading bench. I’m glad I did because with a muzzle velocity of 2,558 f.p.s. (based on a 10-shot average) the bullets fired with the higher powder charge would not fall below the supersonic threshold until they passed the 1,100-yard mark, meaning that I’d need a longer test facility. 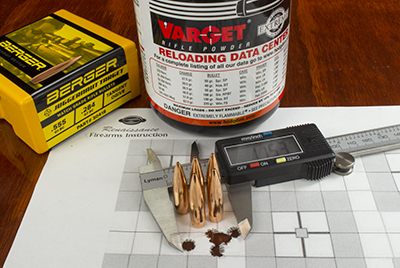 On the other hand, with a 10-shot average velocity of 2,294 f.p.s., the 39.7-grain load would go transonic at right around 900 yards, leaving me a little room to wiggle (pun intended). So, although the load was slightly outside of m.o.a., it still was the best one for this particular experiment. I also reminded myself that these are long-range bullets, designed to shine at 1,000 yards—a considerable distance. Sure, I would love to see sub-m.o.a. accuracy during load development, but sacrificing a fraction of an inch on the short game is a small price to pay for being able to produce an effective group beyond conventional distances.

I will say this, though. During said development, I experienced absolutely zero pressure signs, which is atypical for this rifle with such a heavy bullet. This is largely the result of an optimized bearing surface that provides enough grip to engage the rifling without risking too much resistance. Even the loads that featured a near-maximum powder charge didn’t exhibit any pressure signs, despite the 90° F testing conditions that they had to endure. So, if you think about it, there is another way to work around the transonic issue at 1,000 yards: load the Juggernauts hot enough not to hit it in the first place. 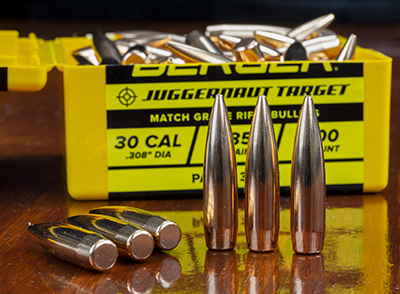 Juggernauts come in 100-count (shown) and 500-count boxes. The bullet’s extended-length tangent ogive contributes to its G1 BC of 0.555.

I planned my trip while paying careful attention to the weather forecast of Lewistown, Pa., where the famous Mifflin County Sportsmen’s Ass’n range is located. What I was looking for was a morning where the wind was absolutely absent, even if for a short period. I got my opportunity in late August and camped on the range to make sure that I was ready to fire my first shots at the crack of dawn.

With wind flags at every 100-yard interval, I waited until all were at rest before I started to fire my five, five-shot groups. The results were stunning, to say the least, with most groups hovering around one m.o.a. and the smallest coming in at 9.530″. This left me with an average of 13.818″ or 1.26 m.o.a., nearly directly proportional to my 100-yard best group of 1.10 m.o.a.

Moreover, they didn’t show any sign of disturbance as each bullet struck the target completely head-on, producing a perfectly round hole with every shot. As my elevation adjustment was spot-on, I have no reason to believe that these bullets were not flying at the predicted 1,058 f.p.s. that our calculator determined, thus gently slipping through that nettlesome transonic velocity band as if nothing had happened.

So, what does this all mean? Well, for starters, the Berger Juggernaut proved it is a terrific option for shooters seeking to squeeze out extra range from a gun chambered for a .30-cal. cartridge. The .308 Win. is, of course, the first such cartridge that comes to mind, but I bet the Juggernaut would also be a good candidate for a rifle chambered in .300 Blackout as well, as it can also use a little extra help getting out there. Of course, nothing is stopping us from using this bullet in a magnum cartridge, such as .300 PRC, getting into Extended Long Range territory without having to invest in another rifle.

Only time will tell what other Juggernaut ventures I will get engaged with, but one thing is for sure—the .308 Win. can still be a valid long-range cartridge, and it is bullets like these that are securing its legacy.

Why Is Government Infringing On Your Right To Carry Armor-Piercing Ammo?